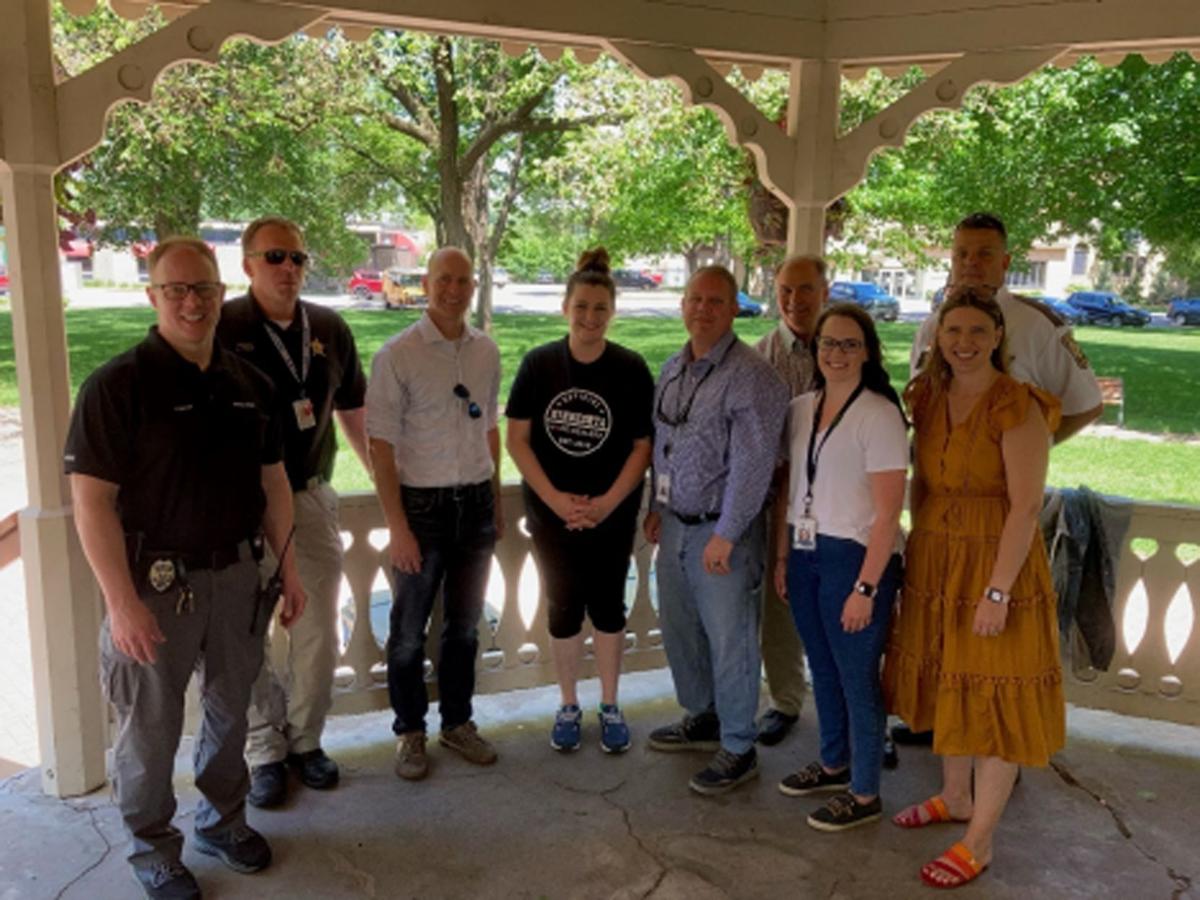 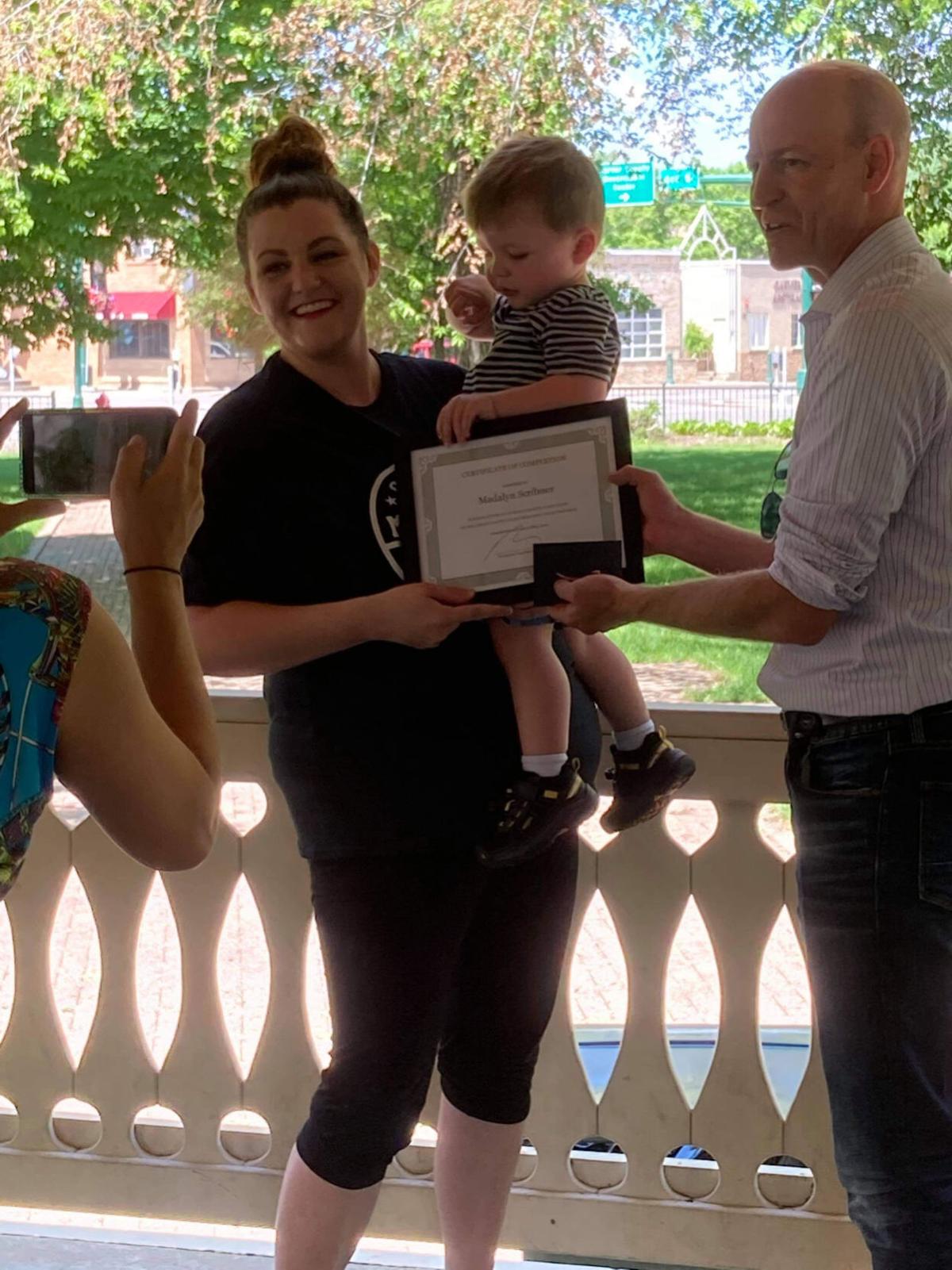 Carver County First Judicial District Judge Michael Wentzell hands a completion certificate to Madalyn Scribner and her child, who she prefers to keep unnamed for privacy.

Carver County First Judicial District Judge Michael Wentzell hands a completion certificate to Madalyn Scribner and her child, who she prefers to keep unnamed for privacy.

Completion certificate and $20 Amazon gift card in hand, cake waiting to be devoured, Madalyn Scribner wore a big smile on her face standing in Chaska’s City Square Park Gazebo this spring. But it wasn’t just for the celebratory tangibles given by Carver County staff.

That day, Scribner was the first to graduate from Carver County Drug Treatment Court — the only of its kind in the county — marking her 518th day of sobriety from substance abuse. And there was a lot behind that smile as she was surrounded by law enforcement officers she ran into at a younger age.

“A couple years ago, I was in a dark spot,” the 30-year-old from Chanhassen says. “I didn’t think that happiness and long-term recovery would ever be possible for me, but here I am, the first (graduate).”

The program, which started last January thanks to a $500,000 federal government grant, is meant to help people with addictions stay out of incarceration. There are 15 people currently in the up-to-two-year program, room for up to 10 more participants currently.

Toward the end stages, participants go to recovery meetings and social events, setting them up for success post-treatment.

Scribner can attest to the rigor (some participants had to leave the program due to it).

She started the program in January, joining an inpatient program and going to court twice a month in the first of five stages.

Scribner then moved in with family and went to a few support meetings like Narcotics Anonymous a week, each time having a slip signed by the meeting chair. She was drug tested at random, sometimes thrice a week.

In addition, she and other participants did community service like highway cleanups and Feed My Starving Children several times.

Upon completion, some of her drug-related charges were dropped — a pillar of the program for some people, depending on their personal records.

YES TO TREATMENT, NO TO PRISON

If drug treatment court sounds intense, it’s because it is.

Senior Assistant County Attorney Kelly Small, who works with the program, says that the “very stringent, rigorous program” keeps people accountable for their actions without putting them behind bars. Jail time for drug users only contributes to recidivism rates, she says.

Instead, treating the root cause of criminal activity for drug users helps both them and public safety.

It’s why this program is so near and dear to Small’s heart.

“Definitely one of the highlights of my work,” she says.

The treatment program is meant for “high-risk” individuals, meaning nonviolent folks with an addiction and criminal history. Small says the team uses an “intense” background screening to ensure eligibility.

They target crimes like drug use, forgery and theft, which often stem from addiction, she says. People with a history of violence, sex crimes or firearms cases aren’t eligible.

“A lot of people are caught possessing small amounts of drugs, maybe while also pawning an item or doing other criminal activity that is fueling their addiction or leaving them to use,” Small says. “They (often) go along with addiction.”

Along with sobriety, participants may gain other pluses, like redacted convictions or reduced jail or prison time.

Part of the county’s newest treatment deal is finding a sponsor (a sober person who mentors those newer to recovery) outside the program. Enter Brooke Gillen, of Watertown, who now sponsors Scribner.

Their story actually started half a decade ago back when both Gillen and Scribner were still using, briefly meeting. Now, they are both in much better places and talk at least every other day.

“I couldn’t say enough,” Gillen says about Scribner’s progress, chatting over the phone as she helps her children carry groceries into the house.

“She’s cleaning out her internal baggage and changing who she is as a person. She’s operating as a proud member of society by holding down a job and by having two small, small children and learning how to be a mom,” Gillen adds.

Gillen says she’s nothing short of “honored, grateful and blessed” to be a part of Scribner’s life as she transitions from the drug treatment court program.

“I keep telling her she’s famous,” she says with a laugh. “She’s the first one to be like, ‘Oh, the program works.’”

Scribner says maybe her best support is her children, a girl and a boy both under 2 years old.

Until she became a mother, she says she was “pushed by the system” and family to be sober, ending up with a criminal history since she was a juvenile.

“Without them, I don’t know for sure if I’d be sober,” Scribner says. “They help me more than they’ll ever know.”

Her turning point, she says, was truly her children. If she wanted to have them in her life, she needed to change.

Others are doing it, too, Small says.

Though some have relapsed and weren’t able to finish the program, many keep each other going through the process.

They rely on and support each other, even through video calls.

“The participants are applauding one another and helping each other, and it really seems they’ve built their own community,” Small says.

A few more participants are getting ready to graduate from the program this summer. Yes, they’ll leave behind that community, but with the readiness to take on the world again.