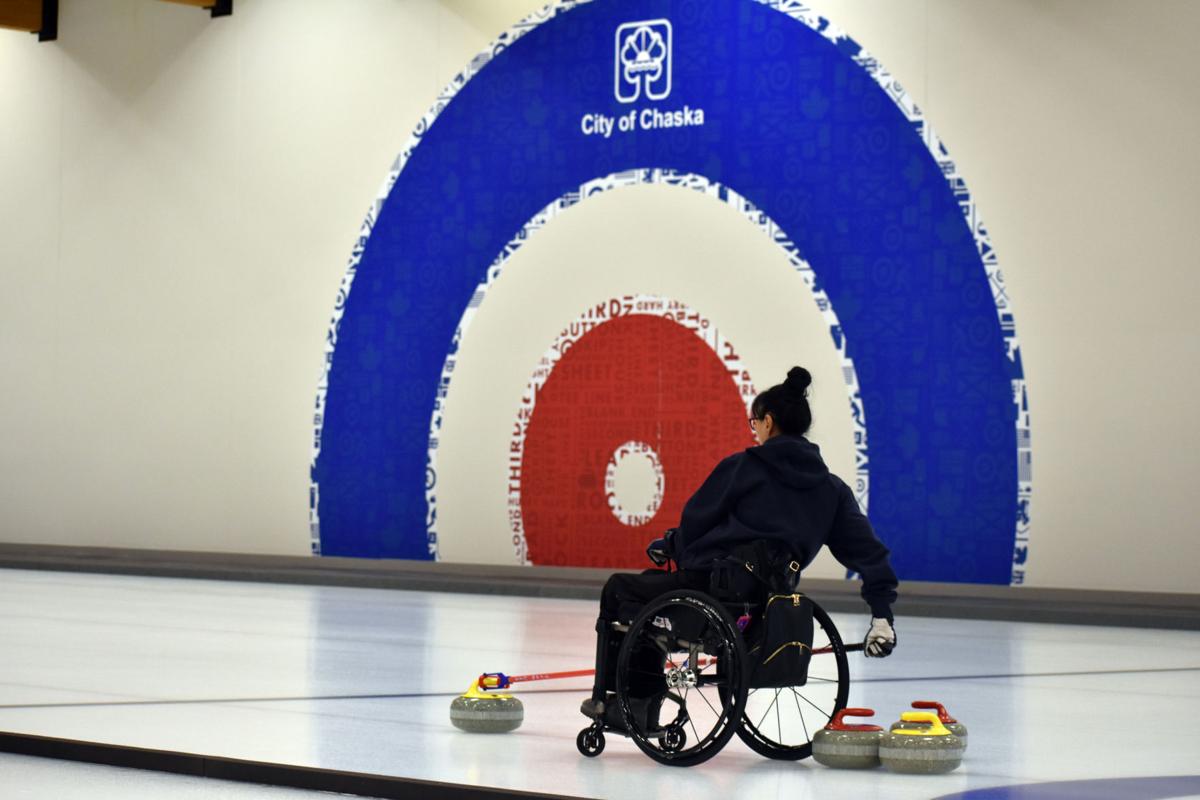 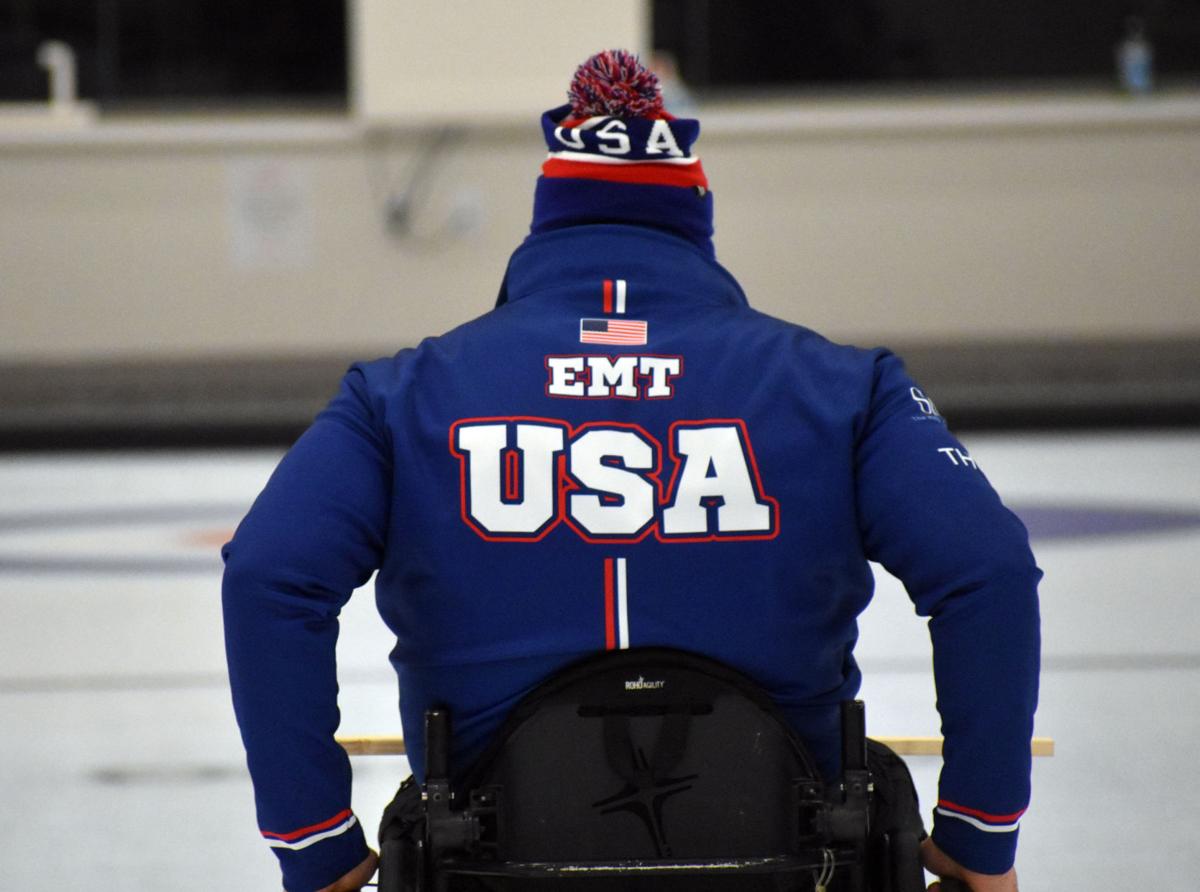 Steve Emt glides across the ice in his Team USA gear. 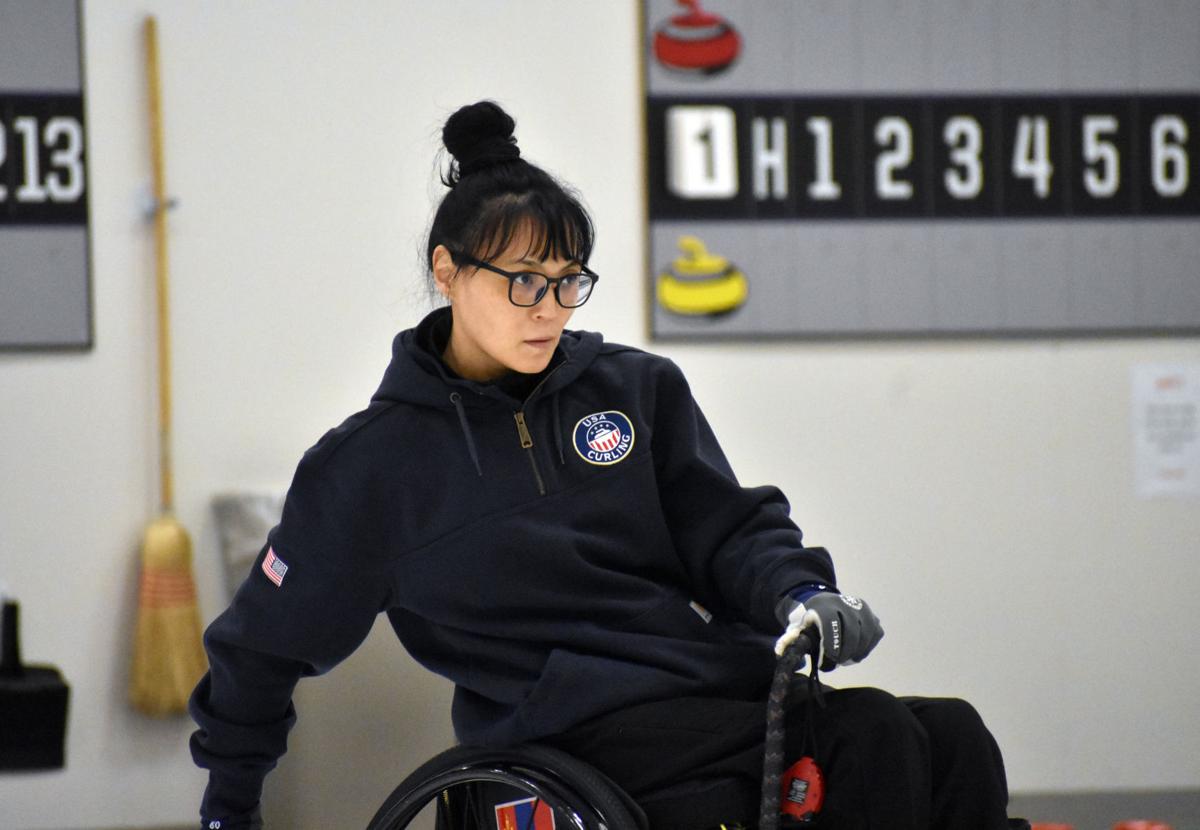 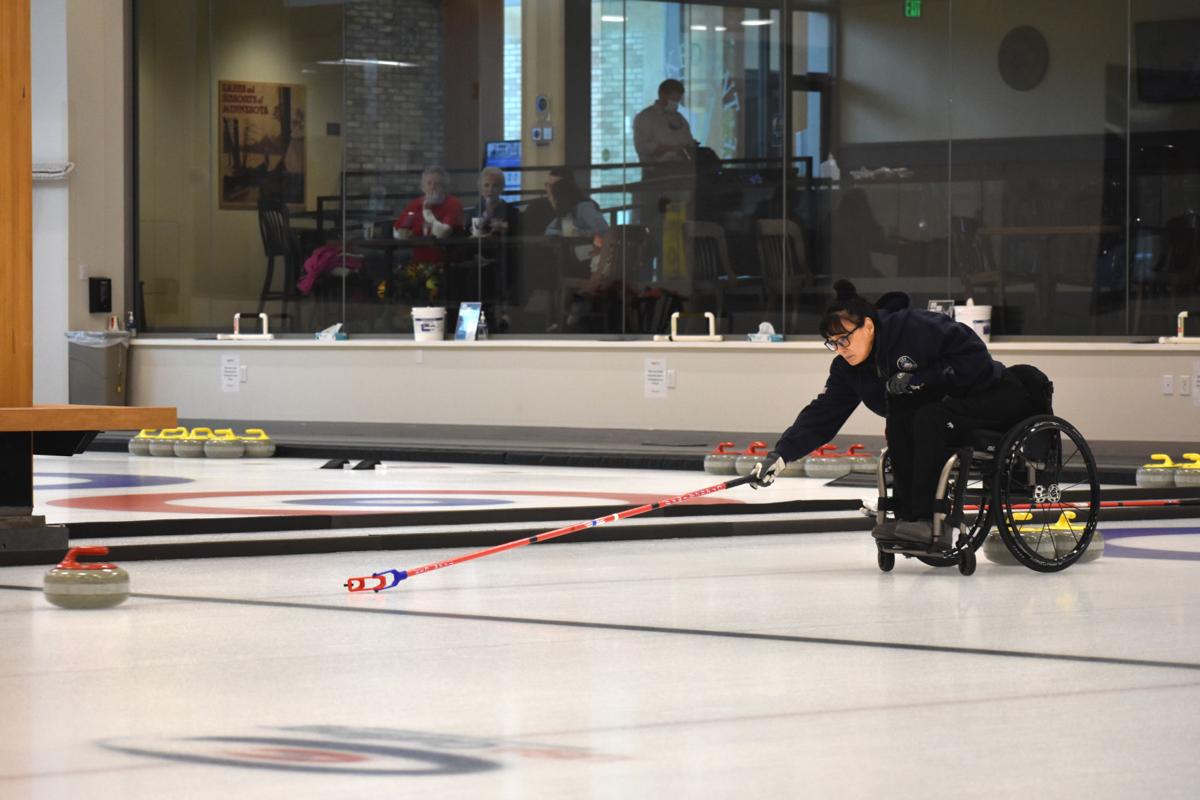 Batoyun “Oyuna” Uranchimeg releases a stone across the ice at the Chaska Curling Center, prepping for a hopeful chance at the Paralympics next year. 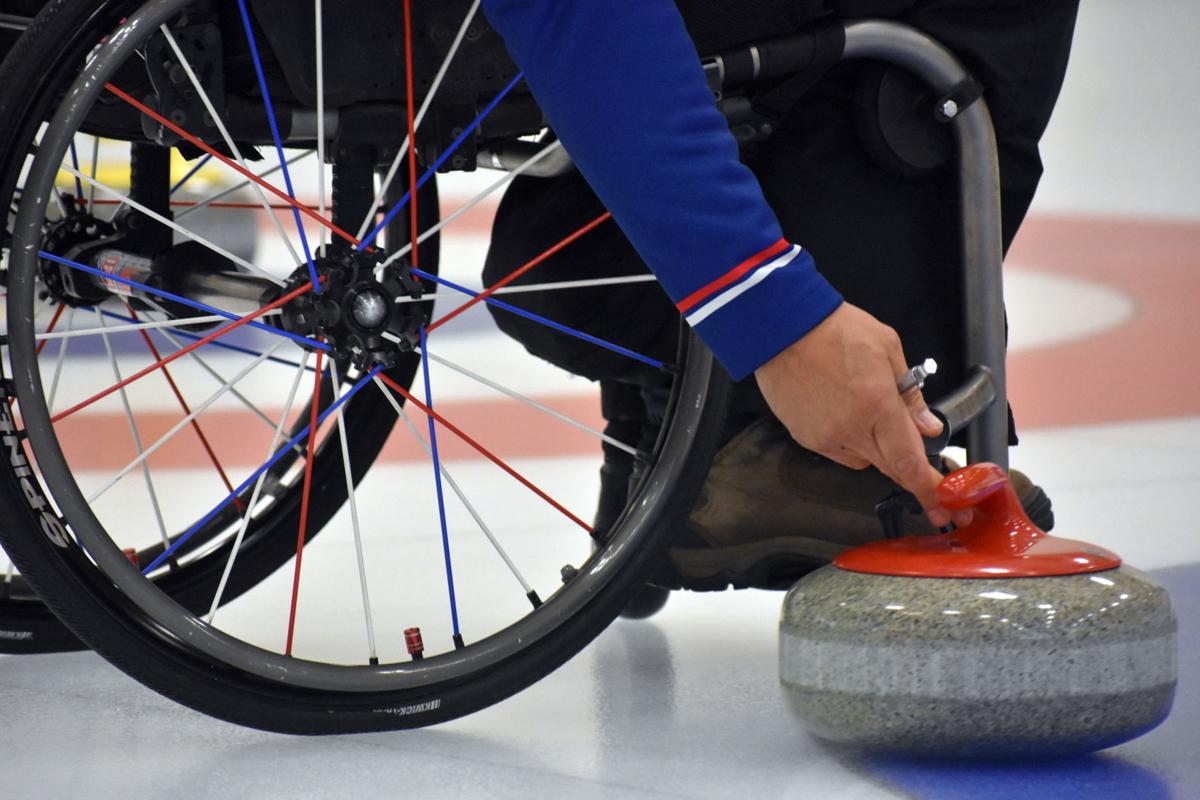 Steve Emt, whose wheelchair features decked-out all-American spokes, moves a stone as he keeps score for his teammate during practice.

Steve Emt glides across the ice in his Team USA gear.

Batoyun “Oyuna” Uranchimeg releases a stone across the ice at the Chaska Curling Center, prepping for a hopeful chance at the Paralympics next year.

Steve Emt, whose wheelchair features decked-out all-American spokes, moves a stone as he keeps score for his teammate during practice.

To curl, you need stones, a broom, and a few other pieces of equipment to help you stay warm and not slip. For some curlers, the only other thing they really need is their wheelchair and delivery stick.

“(This) was the most important competition for us as Team USA so we can actually have a chance into the Paralympics,” says Oyuna Uranchimeg, Team USA athlete and Minnesotan. “Of course, everyone wants to be in the Paralympics, so it’s very important.”

Both Emt, from Connecticut; and Uranchimeg, from Burnsville, periodically meet with their team at the Chaska Curling Center to practice. Emt says the space is “one of the best in the country.”

"We're blessed to be able to do what we do and come to Chaska," Emt says.

Half a decade ago, Uranchimeg didn’t even know what curling was. Now, she’s hoping for a shot at the top.

“I just wanted to give it a try and here I am thinking about Paralympics,” says Uranchimeg, who lives in Burnsville.

It would be her first go as a Paralympian after being on Team USA — which includes her, Emt, Pam Wilson, Matt Thurns and David Samsa — for the last three years.

“I can’t get on a tennis court against Serena Williams — I’ll get smoked. But I can get out here with the best able-bodied curlers in the world, and I can beat them."

Emt has been on the team for seven years after being approached by a Paralympic trainer while on vacation.

In early May, Chaska Curling Center Manager Jeff Isaacson says a boy who uses a wheelchair visited the center while the USA Wheelchair Curling Team was practicing.

“The family was excited to see this and inquired more about curling possibilities. We hope to get him on the ice soon,” says Isaacson, in an email.

Team USA Deaf Curling has used the facility before, as well as a group of local deaf curlers who play in the regular league, according to Susan Marek, who works in software operations and customer service at the center.

“Curling is a sport that can be accommodating to many physical limitations,” Marek says. “While you're used to seeing people in a low lunge position sliding along the ice and gracefully delivering a rock out of their pointer finger, they are able to use a delivery stick so they can push the rock from a higher position.”

That works especially well for people with certain disabilities. The Chaska Curling Center has delivery sticks and wheelchair ramps on hand to help everyone enjoy the game.

Matt Dolan has been a curling instructor at the center for four years now. He interacts with all sorts of people, which is part of why he loves the job.

“We see such diversity that comes through,” Dolan says. “We work with people as young as 6, 7 years old, up to 90 years old, and the experience is always pretty much the same in that it is all about having fun. So people come and they always leave with a smile on their face and they've experienced something brand new.”

Beyond the stones gliding across the ice and the noises they make when crashing into each other (one of the things she first loved about curling), Uranchimeg loves the community.

“You can all play together as a team with different people,” she says. “Anybody with a wheelchair can roll in and throw a stone. Not every sport has that.”

“I can’t get on a tennis court against Serena Williams — I’ll get smoked," Emt adds. "But I can get out here with the best able-bodied curlers in the world, and I can beat them."

When he started curling seven or so years ago, there were maybe 10 curlers in the country who he knew used wheelchairs. Now, he says there are probably 50 or 60.

“Anybody can do it,” Emt says. “I wish I found this sport 20-plus years ago when I had my accident. I’d be a six-time Paralympian by now.”

Uranchimeg describes what it was like bringing home gold last month in Finland.

“It was just incredible,” Uranchimeg says, though adding she would have been happy with any of the top three awards.

The team’s most important goal, they agreed, was to qualify for the Beijing championship this fall.

“If we were in the finals, even if we got the bronze medal, we would have been fine,” she says.

Emt thinks back through that April day.

At the start, things were going well: They’d won the first six games, then lost two.

The team needed to win the last one against Italy to get into the top three — and there was a “good chance” the team could’ve been cut from that bracket, he says. It came down to the second-to-last shot. Italy missed.

“We were in. I just lost it. I want this so bad for my teammates. I’m the only Paralympian returning on the team and the whole experience is absolutely life-changing,” Emt said. “I was sobbing tears of joy — it was absolutely icing on the cake.”

The team's 12 members will try out for the team, five of them going to Beijing's world championships. There's a lot of hard work to put in during the next few months, including meeting monthly to practice in-between strategy calls.

"We go to the Paralympics."