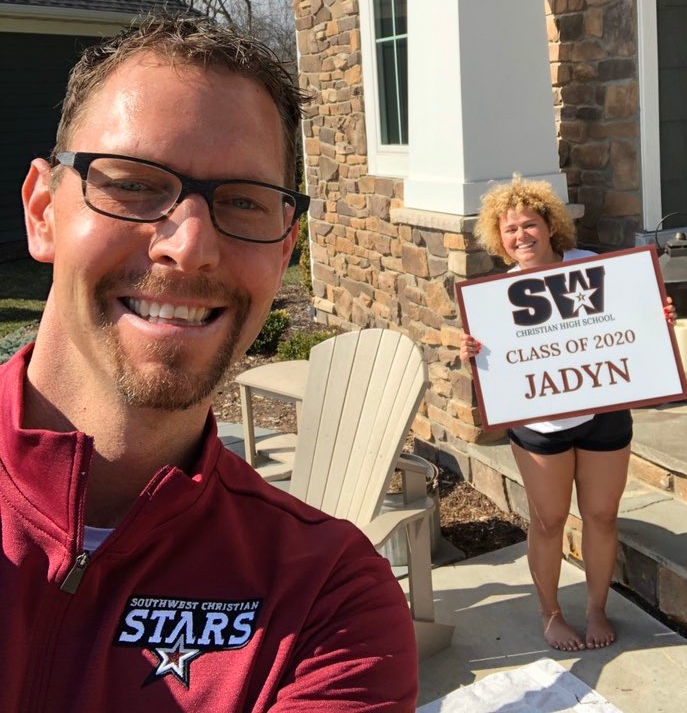 Head of School Dan Beckering visits Southwest Christian High School Class of 2020 student Jadyn Huseby in late April, dropping off a yard sign as a show of support for seniors. 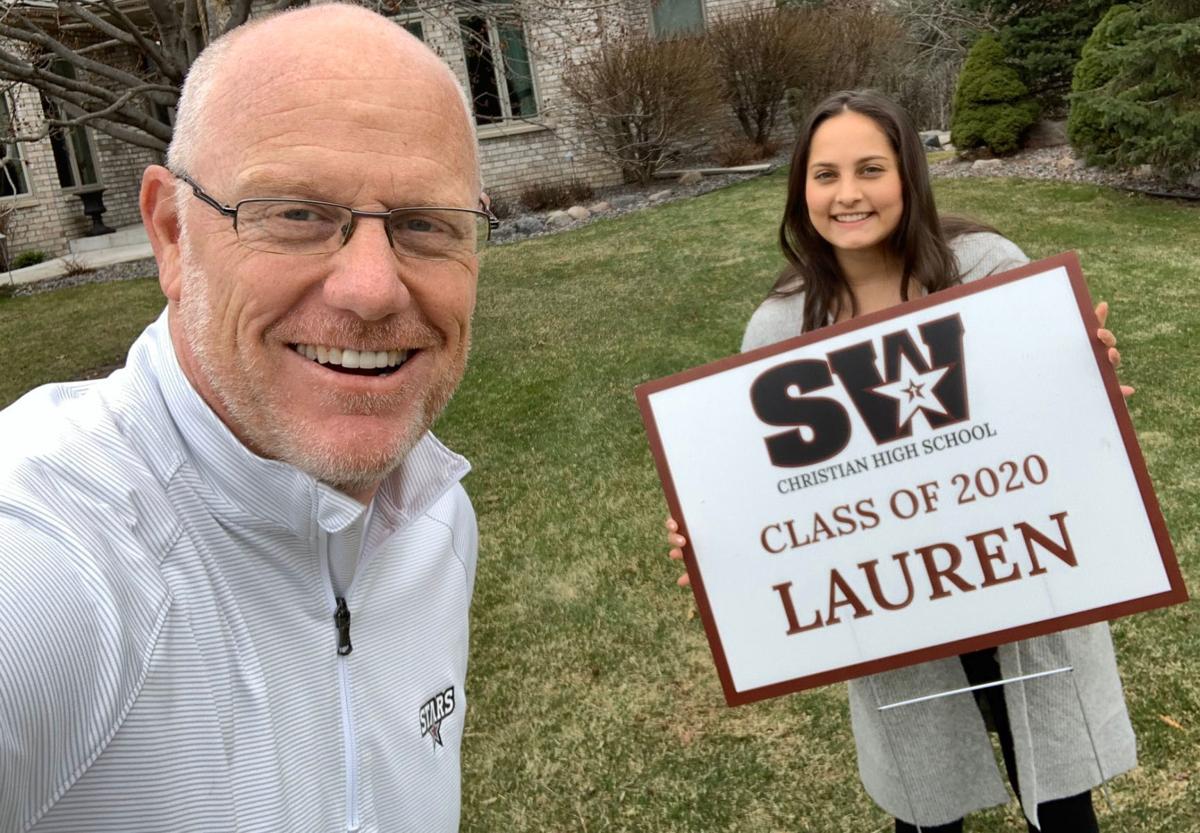 Senior Lauren Jones and Southwest Christian High School Dean of Students Rob Wassenaar pose for a picture after Jones received her senior yard sign, one of 81 delivered by school staff on April 23. 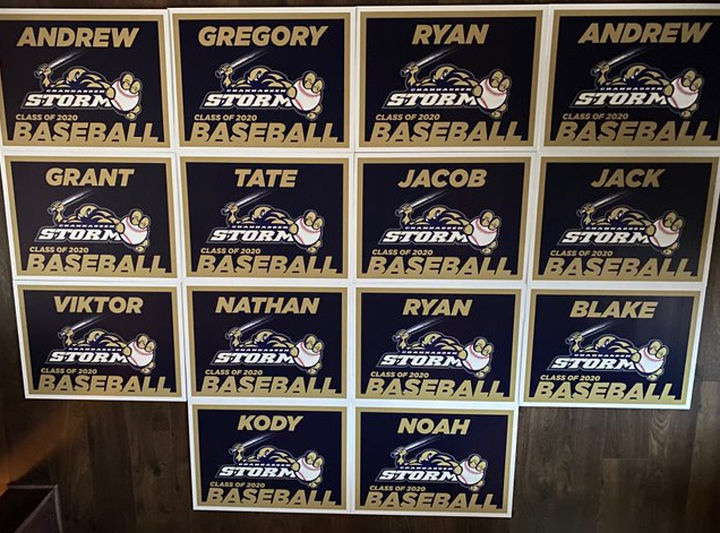 Ross Van Hauen, head coach of Chanhassen Baseball, surprised all 14 seniors in the program with a Storm yard sign as a sign of support late last month. 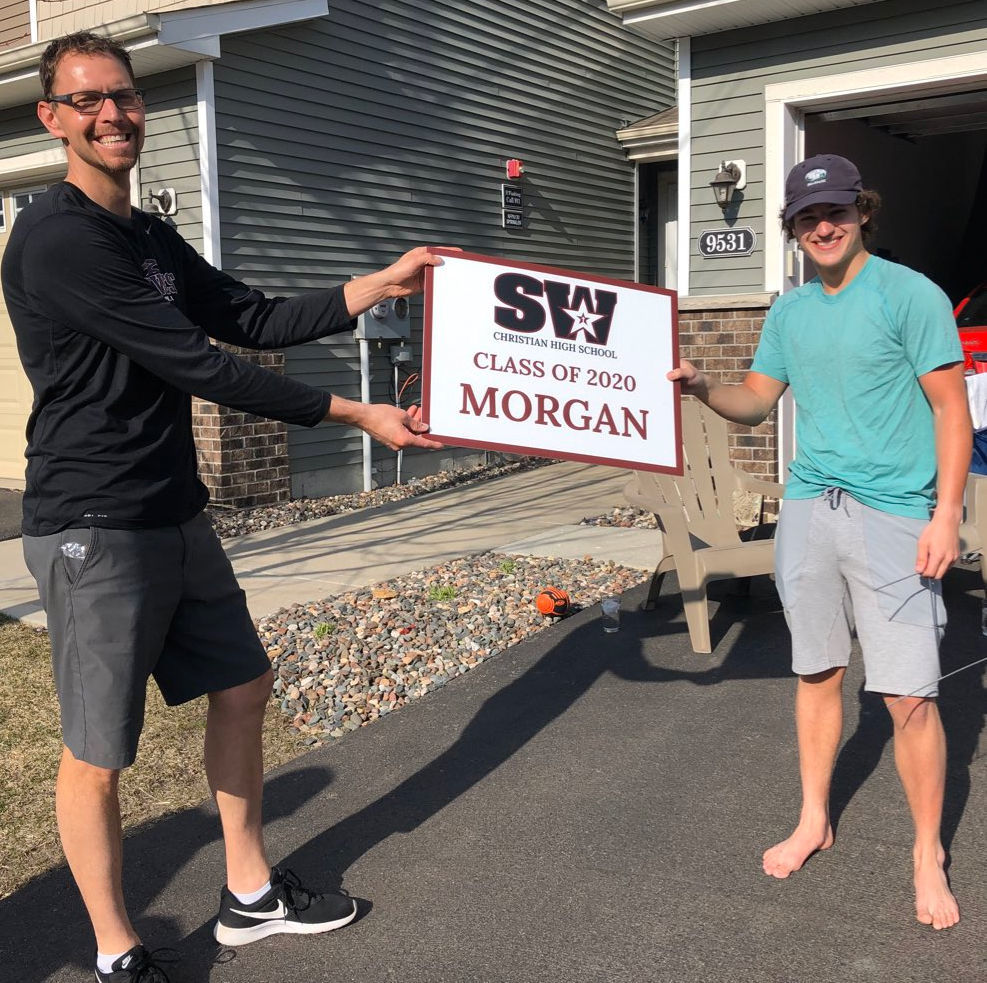 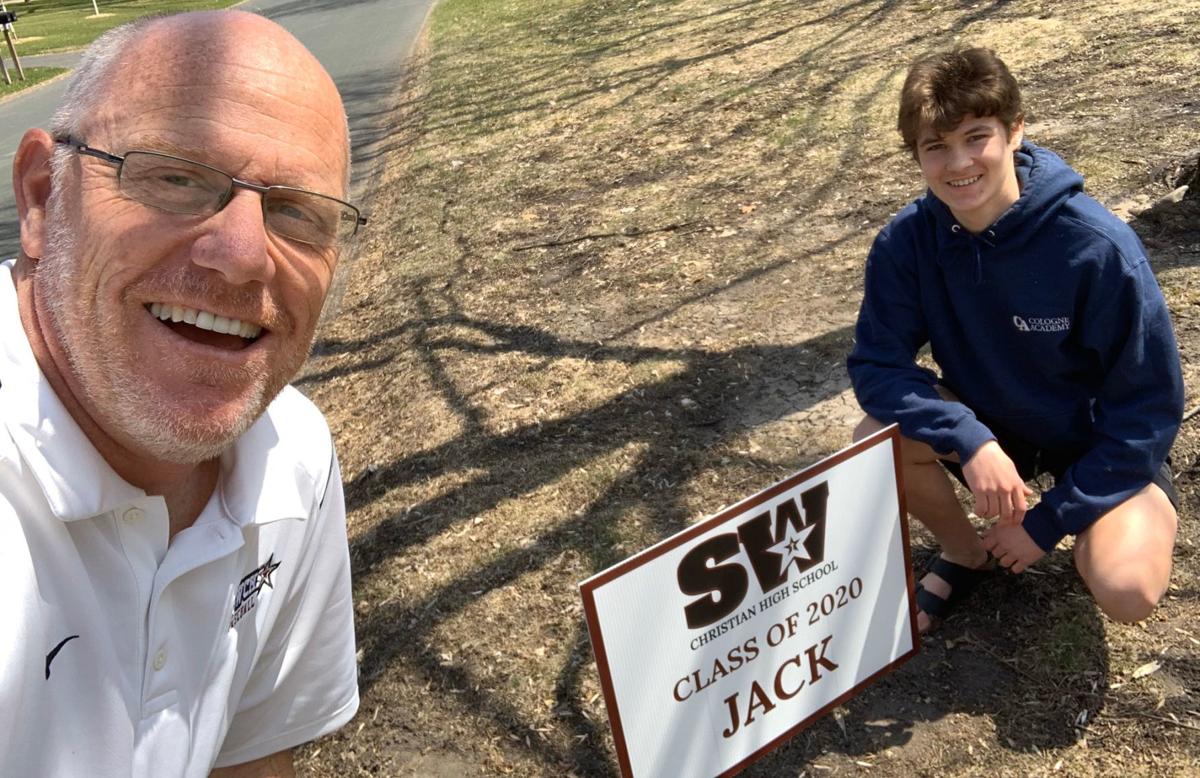 Head of School Dan Beckering visits Southwest Christian High School Class of 2020 student Jadyn Huseby in late April, dropping off a yard sign as a show of support for seniors.

Senior Lauren Jones and Southwest Christian High School Dean of Students Rob Wassenaar pose for a picture after Jones received her senior yard sign, one of 81 delivered by school staff on April 23.

Ross Van Hauen, head coach of Chanhassen Baseball, surprised all 14 seniors in the program with a Storm yard sign as a sign of support late last month.

Dan Beckering had spent too much time in his school and home office. He needed to get out. The Head of School at Southwest Christian High School in Chaska needed to connect with students in person.

So he jumped in his car and drove house to house, around the Chaska, Chanhassen and Lake Minnetonka areas delivering a message.

Yard signs for the Class of 2020. Each with a personal touch, first names printed for all to see.

Dean of Students Rob Wassenaar followed on the same journey east into Eden Prairie and Edina. Athletic Director Darin Keizer took on Carver, Waconia and beyond.

Eighty-one homes, 81 seniors, all in one day.

"We had been highlighting our seniors on social media. Putting up senior pics, some other fun stuff out there. like decision day for some of our athletes. We wanted to do more," said Beckering, who has worked at Southwest Christian since 2001, and has been in his current position for 11 years. "We wanted to make sure our seniors, on their property, felt we were celebrating these last few weeks with them."

Beckering said the April 23 outing around town found nearly every senior at home, an opportunity for the three school leaders to connect with the, talk a little, and assure them they were thinking and praying for them.

"It was a fun day, a lot of driving. I had been stuck in the office, at home, with so many zoom calls. It was refreshing to knock on someone's door, step back appropriately, talk with a student, see how they're doing. Most of the students I talked with had remained much more positive than I thought they would be," Beckering said.

The final day for students is May 11 for seniors and May 22 for 9-11 grades. A virtual Baccalaureate program is also scheduled for June 3 to highlight student achievement.

With a senior group of 14 players, the Chanhassen Baseball team was eager to take a run at repeating as Metro West Conference champions this spring.

They never got that chance.

As a way to honor them, to show them a little extra love, head coach Ross Van Hauen and parents of seniors cooked up an idea for yard signs to show the players support.

"We decided together that it would be a fun way to show support for our seniors if the team purchased them and placed them in the yards of the seniors as a surprise. That family and I went to work to make it happen. We expanded it a bit and offered the yard signs for purchase to all players in hopes of building some support for our seniors and recognition for everyone who has to deal with losing a season of a sport they love," Van Hauen said. "I handled the communication pieces and some logistics and they handled the design and ordering process."

Van Hauen said many families decided to purchase their own sign, donated additional money for the signs, and/or volunteered to deliver the signs to players’ homes.

"Everyone is feeling extra heartbroken for our seniors and wanted to help in anyway they could," the coach said. "The signs are a small gesture that certainly don’t make up for the season lost by our players (and their families), but we wanted to do something to show we care."

Van Hauen placed them in all seniors' yards on a late April evening. "It was fun to see where all of the players lived and to think about their time in the program and how they have developed as a person while I was out making the deliveries. A small group of volunteers delivered the other signs that next day and we all proudly display them in support of each other and our baseball community," he said.

Additionally, senior parent Cristin Maschka has compiled profiles of each senior including future plans, favorite baseball memories and then and now photos, and has posted them on social media on Twitter @CristinMaschka.