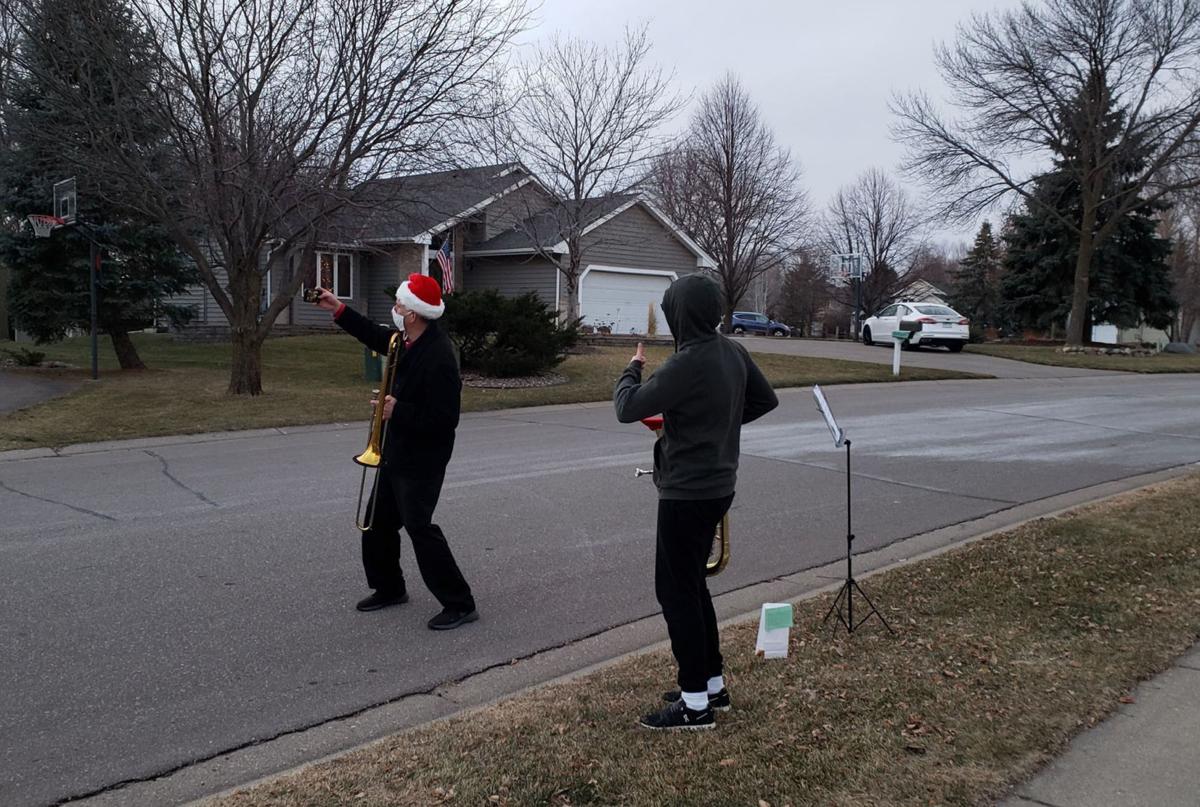 Eric Songer, left, takes a photo of himself and a band student while caroling. 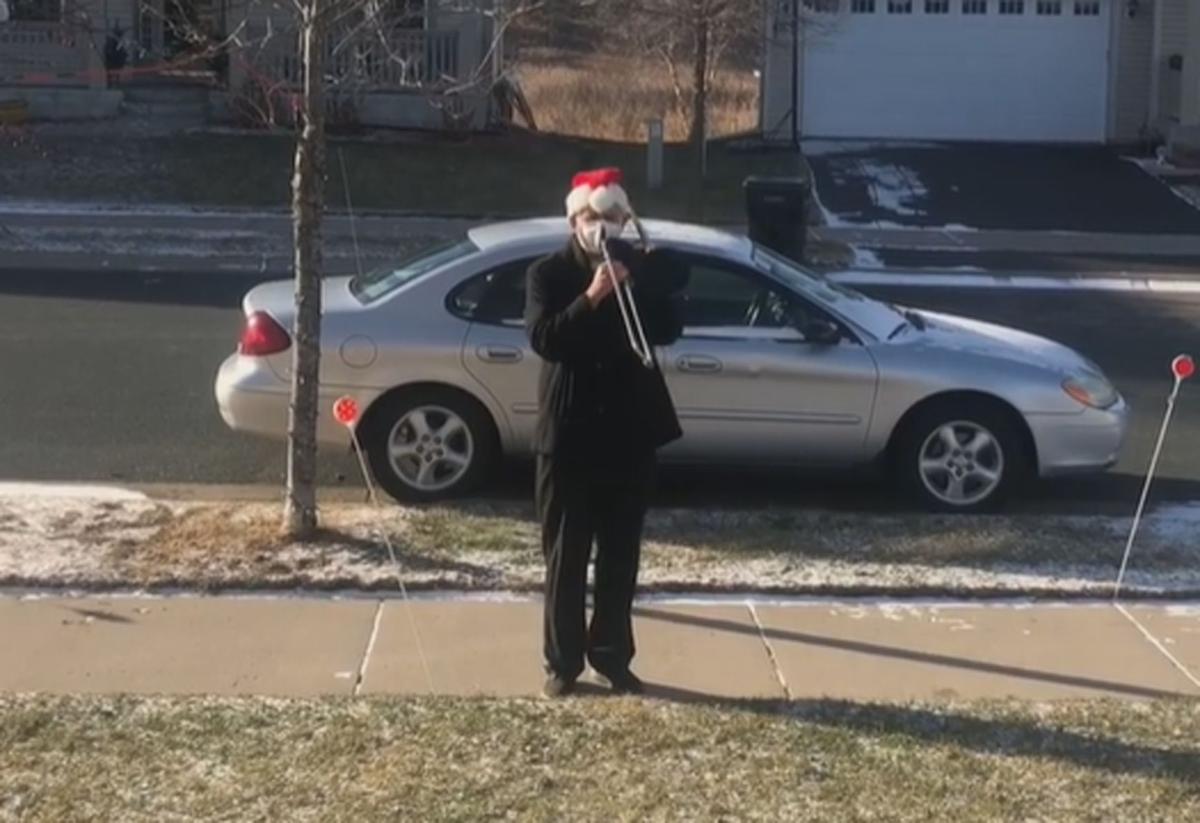 Eric Songer plays “Grandma Got Run Over By A Reindeer” for the Wright family.

Eric Songer, left, takes a photo of himself and a band student while caroling.

Eric Songer plays “Grandma Got Run Over By A Reindeer” for the Wright family.

Alan Wright and his family were at home this winter, doing distance learning and working, when he noticed something strange.

“I started hearing this weird sound,” the Chaska resident said.

He thought maybe his children, ages 15 through 22, were practicing their instruments elsewhere in the house. But when he looked outside, he saw the unexpected: a man wearing a Santa hat and concert blacks, playing Christmas music on his trombone.

The Chaska Middle School West band teacher was caroling — trombone caroling — at the houses of his students. All 300-plus of them.

“Since we can’t all get together and we can’t all be inside playing together in a small group, what if I just went to them?” Songer asked himself.

He didn’t hesitate to answer the question. It started in the spring.

Songer looked up the addresses of his 380 students and took eight days, coordinating songs with his students at a distance in small ensembles.

This time around, with colder weather and higher COVID case numbers, he knew it wasn’t as safe to meet with students at their community park or in their driveways. So:

“I just decided I’m going to go to every student’s home and carol for them, just play my trombone,” Songer said.

Yet again, he made another “huge big map” of students’ houses, came up with a route, and started right after Thanksgiving. Students were all given copies of Christmas music, and he let students decide if they wanted to play along at a distance or just watch from inside.

He finished up last week, stopping at 20 to 30 homes a day nearly every day of the week with bags of candy in tow. He did most of the caroling during his non-work time.

If this musical adventure sounds above and beyond for one teacher, most would agree.

Suzi Tripp’s children are now both college graduates, but once upon a time they went through Songer’s classes as students.

“He is tireless and will always find a way,” Tripp said of Songer, noting she saw one of his mini spring performances. “This man will not accept the word impossible! His tenacity, his never quit attitude and his love for teaching, music and his students/families makes a difference every day. He is quite incredible.”

To Songer, it’s just how he operates.

He’s been instrumental in getting a ukulele grant for his middle schoolers and offering no shortage of musical opportunities for the kids. Still, he thanks co-teacher Maggie Zeidel for her help and said every teacher just wants the best for his students.

“Teachers care about their students and it’s not just me,” Songer said, crediting his field of study. “I know there’s other teachers that would love to do something like this but I think music lends itself more.”

Songer stopped at the homes of current students, future students, former students and families, and even strangers, when he knocked on the wrong door.

“The first night I went, my phone died and it was getting dark … I’m like, wandering through the streets with my trombone and my Santa hat. One family ran into the house,” Songer laughed. “(But) some people say, ‘You can still play!’”

Laura Reid Gringas’s son was on the other side of the door — one of the right doors.

“It was so amazing to have Mr. Songer stop through. Between caroling and the outdoor neighborhood concerts last spring, he is really going above and beyond!” she said.

With no electives this year, after-school classes scaled back, and all bands divided into smaller bands for in-person and hybrid learning, music output has been undeniably less. This time of year, the 6th grade band students usually caroled throughout the school. The older grades would head over to the Eden Prairie Center mall for a concert. That’s all changed.

Songer said his caroling tour has taken the place of a lot of these music events, but the response has been stellar.

“They light up. They just absolutely light up,” he said.

He knows playing with your middle school band teacher perhaps isn’t “tremendously exciting,” but it’s sure better than playing on their own at home. He hopes his students don’t forget how much weight making music together has.

“Just to know we’re more than just a face on a screen in a Google Meets session and just the power of music,” Songer said.

But others know the power of something, or someone else.-

“We’re lucky to have him. I could go on and on about how great he is,” Wright said, noting his children went through band with him. “I don’t know if we’ve ever encountered anybody like Eric Songer.”