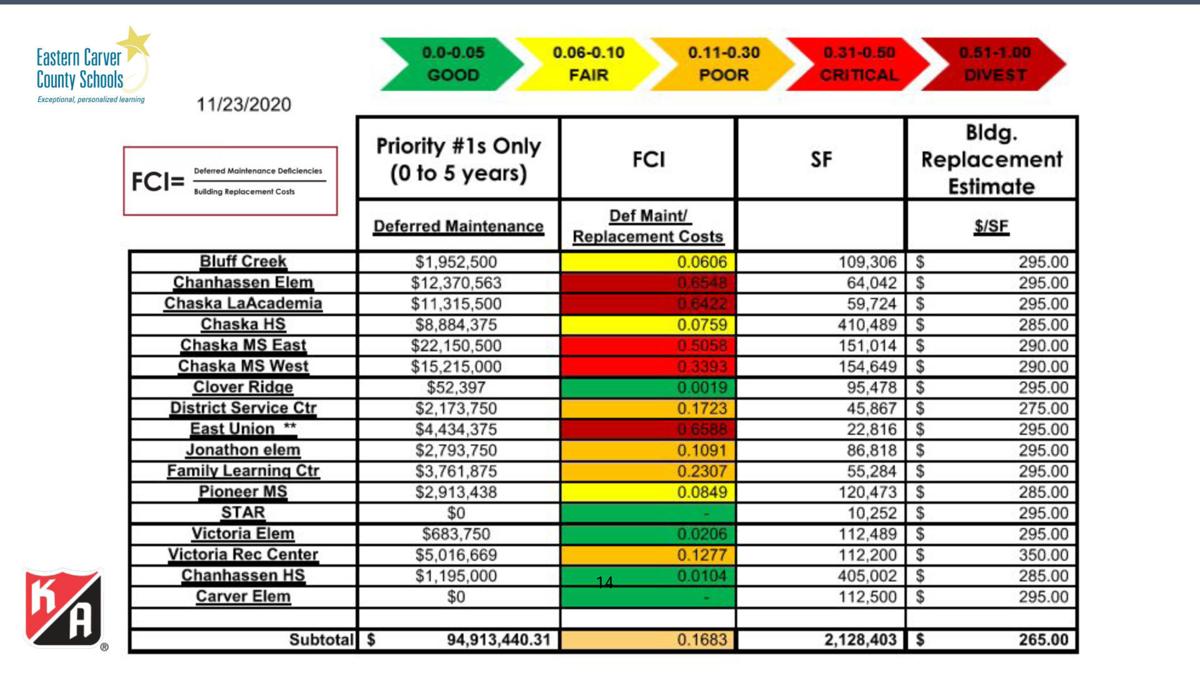 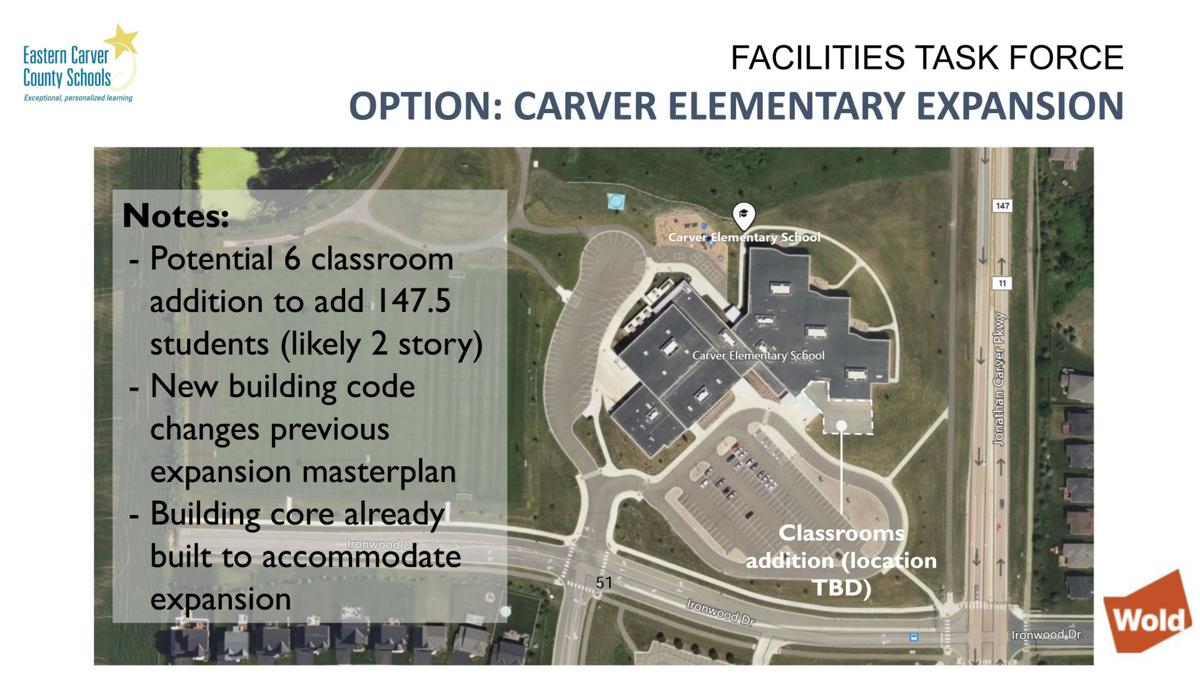 Carver Elementary could see an expansion soon as the school is projected to be over capacity in coming years. 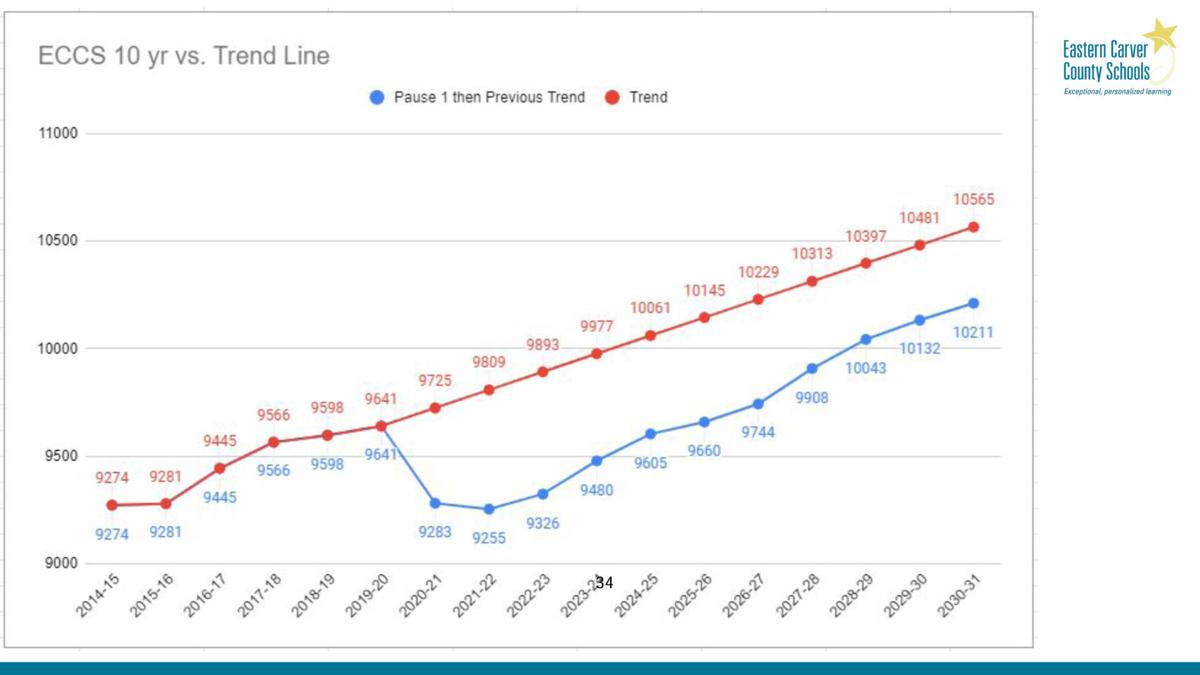 Eastern Carver County Schools took a dip in enrollment this year due to the pandemic, forcing a shift in projected students over the next 10 years.

Carver Elementary could see an expansion soon as the school is projected to be over capacity in coming years.

Eastern Carver County Schools took a dip in enrollment this year due to the pandemic, forcing a shift in projected students over the next 10 years.

Could a new bus garage, a Carver Elementary building addition and much-needed improvements to Chanhassen Elementary be coming soon in District 112?

A facilities task force of 23 members, which included eight from administration teams, three current or former school board members, parents and students, teachers, buildings and grounds leadership and architect and construction consultants identified those three projects as current needs across the 17 Eastern Carver County Schools buildings.

The need for another Chaska elementary school in the near-future, located in the southwest portion of the District, and a possible rebuild of Chanhassen Elementary are two other projects that are earmarked for coming years.

Jim Muenzenmeyer, buildings and grounds director for District 112, said a team of engineers analyzed all 17 buildings plus the bus garage in downtown Chaska three years ago to detail what maintenance was needed and to prioritize those needs. He met with principals recently to update those building reports.

Five schools were characterized as critical or divest, meaning repairs or replacement costs exceed more than 50 percent of building worth. Those in the worst category were Chanhassen Elementary, East Union and La Academia. Chaska Middle School West and East were in the critical stage.

"Divest doesn't mean we have to get rid of it. It just means we put it in an order in which building gets the kind of care it needs," Muenzenmeyer said.

District 112's current bus garage on County Road 61 is the greatest need, the task force concluded. The current space is simply put a mess. Parking lots are failing. Buildings are too small to house the entire fleet, while mechanic repair bays are too tight and the fuel station island creates long back-ups.

"The buildings are in very poor shape. The District was hesitant to stick any kind of money into it with the future of the buildings in doubt," Muenzenmeyer said.

With the District purchasing some of its own buses, the fleet will increase to 120 this summer. The recommendation of the task force was to construct a new garage, with a projection price tag of 12 million. A new facility in Waconia, owned by Koch, drew praise from touring task force members.

While the District does contract out services with Positive Connections, the issues that arise with buses fall on the District. Having a proper garage will keep assets in working shape longer, Director Finance and Operations DeeDee Kahring said.

"Everyone, (the bus garage) was there No. 1 thing," said board director Jenny Stone of the task force members. "They really wanted to limit boundary changes, we want to maximize our buildings, but we need a bus garage. Everything we kept doing came back to that."

Kahring said building the new garage in a township, rather than in the city, would reduce the cost of the project with the ability to use metal paneling on the exterior versus brick and stone.

Carver County, with a population of more than 105,000, is the fastest growing county in the state of Minnesota, David Brecht, students services administrator, said. The median age is 37.5.

The new projection timeline now pushes that date out to 2028-29.

With those new enrollment projections, a capacity study was conducted, finding adequate space at all middle and high schools. It is at some elementary schools, most notably Carver, Victoria and somewhat Jonathan where, where classrooms could potentially be overcrowded in the near-future.

The task force's brainstorming session came up with:

The task force concluded along with a new bus garage, an $8 million addition at Carver Elementary, increasing the long-term facilities maintenance budget by $10-12 million more in long term and developing a long-range plan for District growth and building maintenance is the current direction needed.

The Carver Elementary expansion, in the southeast portion of the building, could potentially add six classrooms to accommodate 147 more students. The structure would likely be two stories.

Kahring added the Carver expansion would not allow for the closing of East Union. A new elementary building, targeted for the Big Woods area between County Roads 61 and 44 near 212, is the likely route to account for housing expansion in the Carver and Victoria areas.

With a replacement of Chanhassen Elementary on a 14-acre site adjacent to the current building down the road, board director Fred Berg shared some concern. Muenzenmeyer assured the board that with a new boiler purchase and a replacement of a portion of the roof the building would be sufficient for the next decade.

"If you ask me to keep Chan Elementary going for 10 more years, I have a plan for that. We'd put in a new boiler. Right now it has three 54-year-old boilers. They don't owe us anything. I wouldn't sleep well without knowing there was at least one new good one in there. We also have a plan to recondition the oldest part of the roof and that would give us a 10-year warranty on the oldest portion," Muenzenmeyer said.

Muenzenmeyer also said deferred maintenance at the La Academia building mostly centered around new heating and cooling duct work that would need to be replaced entirely in the ceilings.

Tax implications, whether bonding, an increase to the long-term facilities maintenance levy, or possible future referendums, will be brought to the school board at the next meeting on Feb. 22.