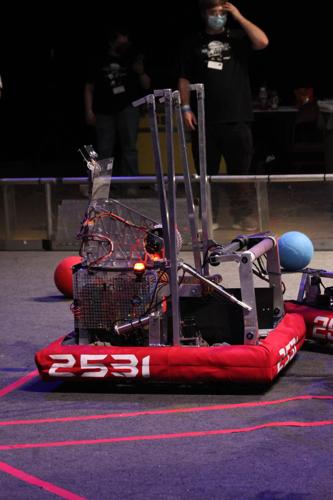 The Robohawks’ “Wilder” competes in the regional robotics tournament in Duluth. 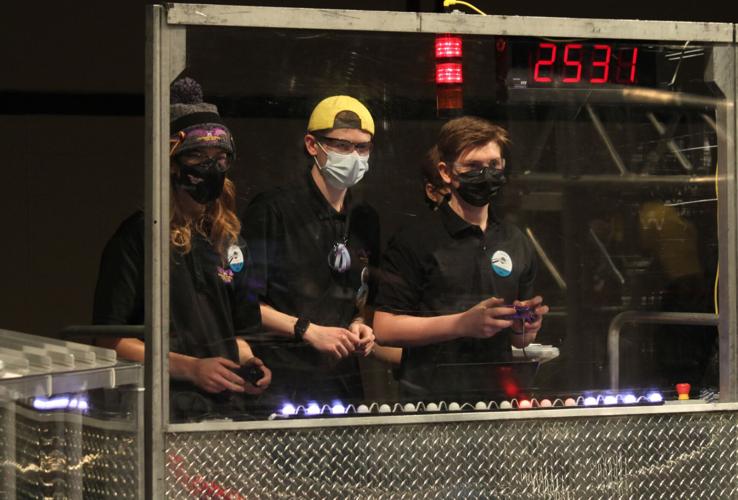 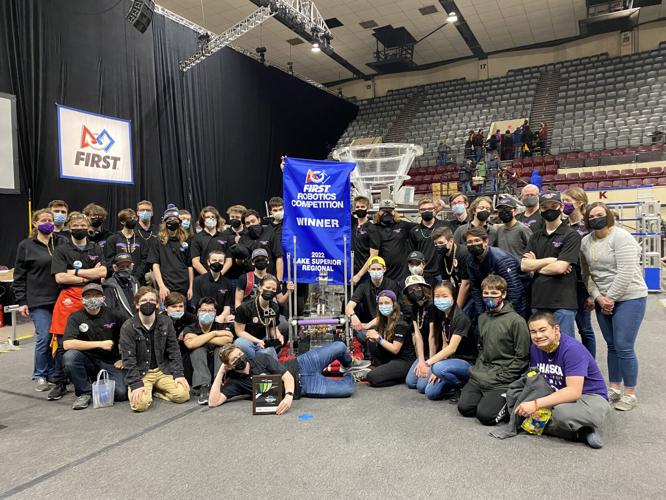 The Chaska High School robotics team, Robohawks Team 2531, captured a title at regionals in Duluth and is now headed to an international competition in Houston. 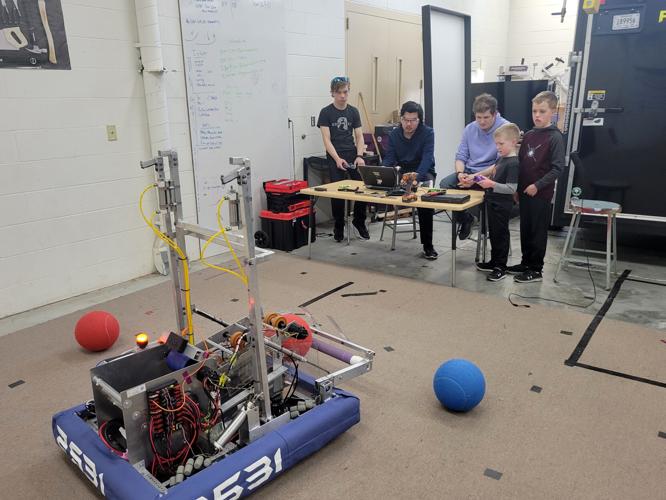 Members of the Robohawks introduce two young visitors to “Wilder.”

The Robohawks’ “Wilder” competes in the regional robotics tournament in Duluth.

The Chaska High School robotics team, Robohawks Team 2531, captured a title at regionals in Duluth and is now headed to an international competition in Houston.

Members of the Robohawks introduce two young visitors to “Wilder.”

Houston, Texas, is roughly 1,200 miles from Chaska. However, that number pales in comparison to the hours and weeks spent bringing “Wilder” to life.

It’s the 2022 creation by the Chaska Robohawks, the school’s robotics team — a robot that can pick up balls the size of basketballs and shoot them vertically through a hoop. A robot that can climb monkey bars.

The robot was part of a three-team alliance that captured the title at the Lake Superior Regional in Duluth last month, besting more than 60 teams. The championship qualified the Robohawks to face not only the best across the country, but also the world, at the FIRST robotics championship in Houston, Texas.

Wilder will now hit the road.

The Robohawks are hoping the entire team can follow for the “once-in-a-lifetime opportunity,” said Senior Captain Kaitlyn Nickel. The team has raised almost $13,000, over one-fourth of the necessary funds to send all 35 team members and 10 mentor/coaches to the championship with nearly 500 teams. Whatever is not raised will have to come out of the team members’ pockets. They depart April 19 for a five-day journey.

“We are talking about competing against the best of the best from all over the world,” Nickel said. “This is something we have worked very hard for.”

Head Coach Steve Peterson recently happened to be in the Chaska High School activities office when a student came in, interested in signing up for robotics. Word is spreading.

Teams design, program and build a robot, starting with a standard kit of parts and common set of rules to play in a themed head-to-head challenge.

There is no manual, only mentors and experience. Some of the students got a taste of robotics in middle school. This, though, is a larger scale.

Piece by piece, the robot comes to life.

Previous years’ robots are disassembled for spare parts in the corner of the technology lab in the lower level of the high school. Some parts could be repurposed some day, Peterson said. “It adds up pretty quick,” he said.

The robotics program is a model for STEM-based learning, with technology and science.

“I’ve always been interested in engineering. I feel like I’ve always been a hands-on type of person and I got into this and I quickly found out I’m in love with robotics. It’s a great thing. The team is great. Building the robot every year is a highlight. This experience is unique to anything else I’ve done,” said Senior Captain Noah Copen.

Competitions are set up with three teams forming an alliance to compete against three other teams. The goal is to make the most baskets and climb to the highest rung on the monkey bars. Points are awarded for achieving certain thresholds.

Wilder was among the robots to come through in the final competition.

“It was a whole lot of effort,” Copen said. “I’d say the past three months we’ve been meeting almost every single night after school until 8. The dedication the team puts in. The effort that they put in. It’s a great experience.”

Lunch room visits from Wilder also have given fellow students an opportunity to see first-hand what the robotics team is all about. That’s how AJ Majerus was introduced. The program has nearly doubled in recent years. Chaska reached its first regional finals in 2021. This year’s team took the next step.

“I really got into it to learn about it, but now it’s all about having fun, being with these friends,” Majerus said.

“It definitely attracts a certain student. One that loves to problem solve, hands-on,” Peterson said.

What makes the experience so special is everyone does their part.

Some design, some code, some reach out for sponsorships. Some learn to drive the robot, others grab tools and construct. Majerus heads up safety; Nickel is in charge of team spirit.

Lucas Bishop, a four-year team member, also a part of many other extra-curricular activities at Chaska High School, said he’s learned many skills from using tools to being a lead on fundraising, reaching out to potential sponsors.

In the end, success is a team effort.

“What makes the FIRST program so unique is that it takes all of the awesome student ideas — we get all of these wonderful ideas when we brainstorm — but we also have this collaboration with mentors, with professionals, who come in and work with our kids. It brings their experience with our ideas and turns a dream into reality,” Peterson said.

The Robohawks spent the first few days of the week before the world championships fine-tuning their robot, making sure the drivers — these positions were given to top performers early in the season — are completely in sync.

Wilder will be packed up and delivered to Houston, ready for action against the world’s best.

Peterson believes every team member should have a chance to attend, giving them an opportunity to showcase their talent and hard work, and represent Chaska and their high school.

“If you look up in the stands, the one team you notice will be us. The one with a whole bunch of lights, that’s us. The last competition we got invited down to the field to do the ‘YMCA.’ Our team spirit is crazy. Everyone knows us for that, loves us for that. That spirit of our team is really what drives us to success,” Copen said.

To donate, search for Help send the 2531 Robohawks to Worlds! on GoFundMe.