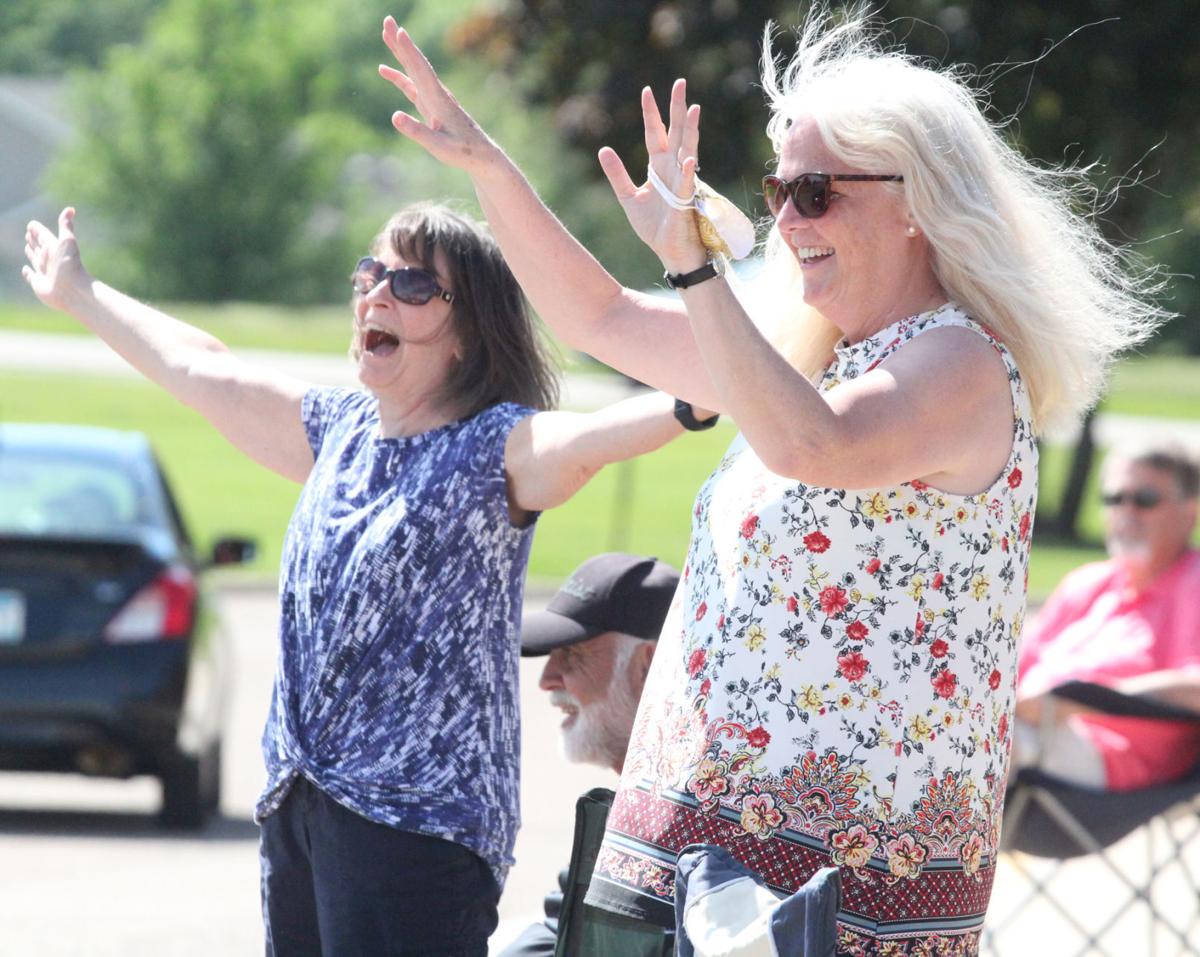 Expressions of love, for former and current students, past and present colleagues, who circled the parking lot at old Chaska Elementary to celebrate the retirement of longtime teachers Barb Kocka and Mary Mobeck. The two teachers have worked together since 1994, the last three years at Carver Elementary. 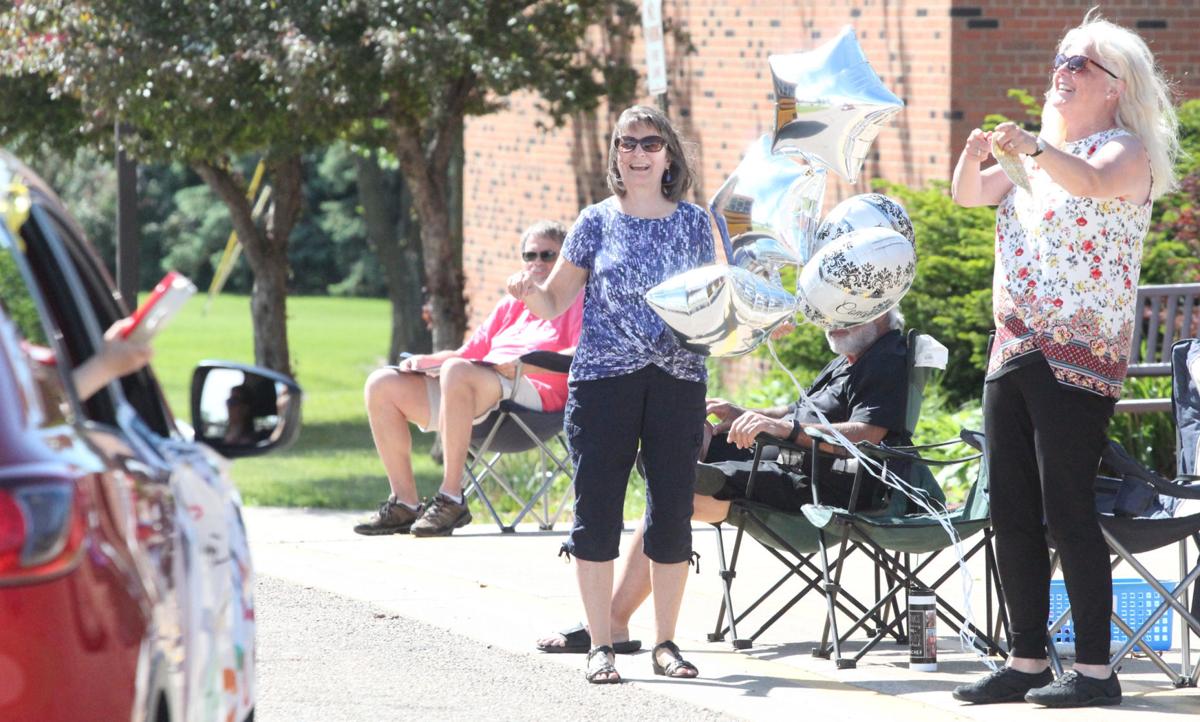 Mary Mobeck, right, recognizes a car with daughter-in-law Emily and son, Rob, and their two children, near the front of the parade for the two retiring District 112 teachers on May 28. Joining Mobeck was longtime colleague Barb Kocka. 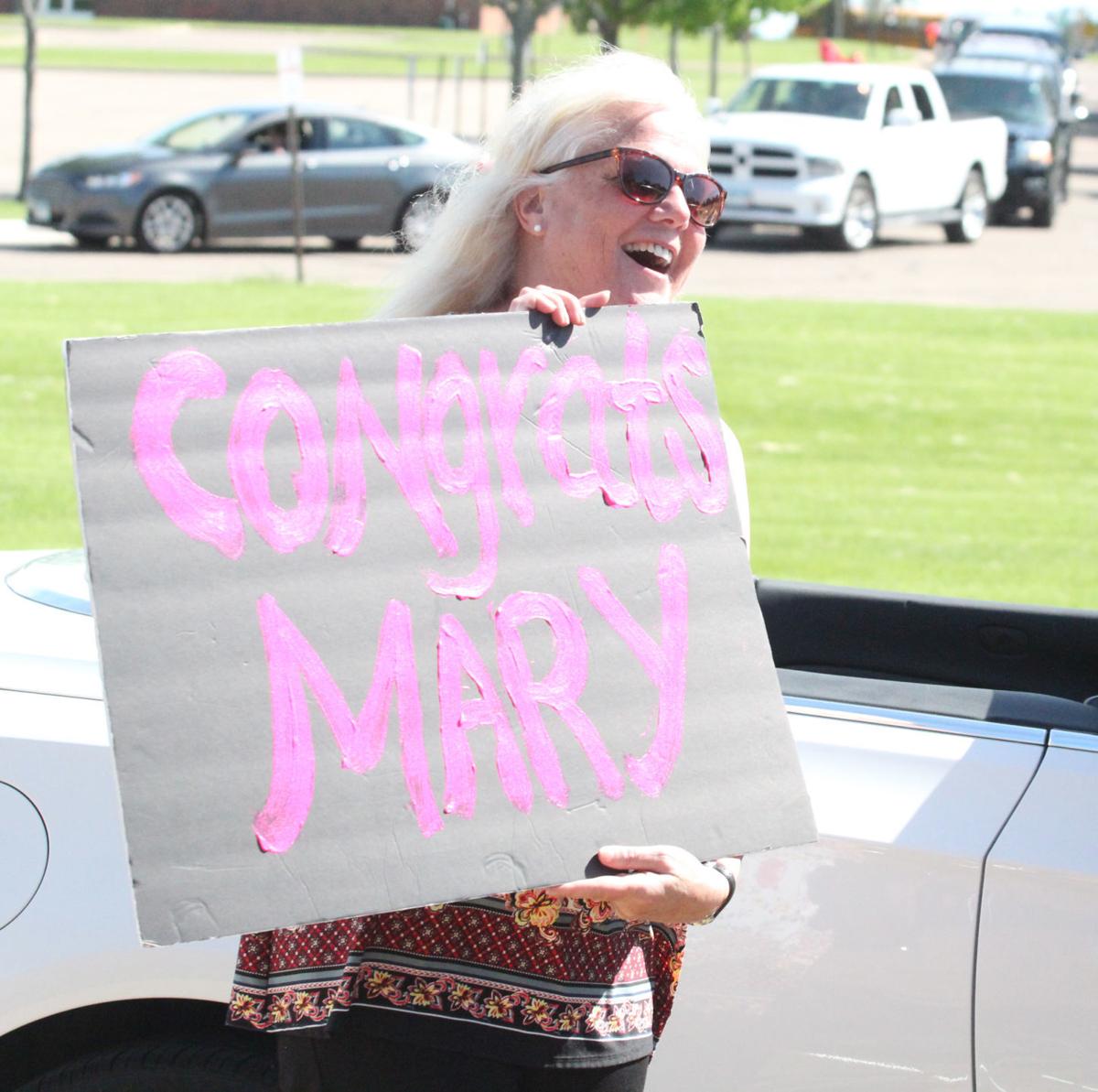 Cars line up from La Academia to Chaska Middle School West to say thanks and goodbye to retiring teachers Mary Mobeck and Barb Kocka (not pictured) on May 28. 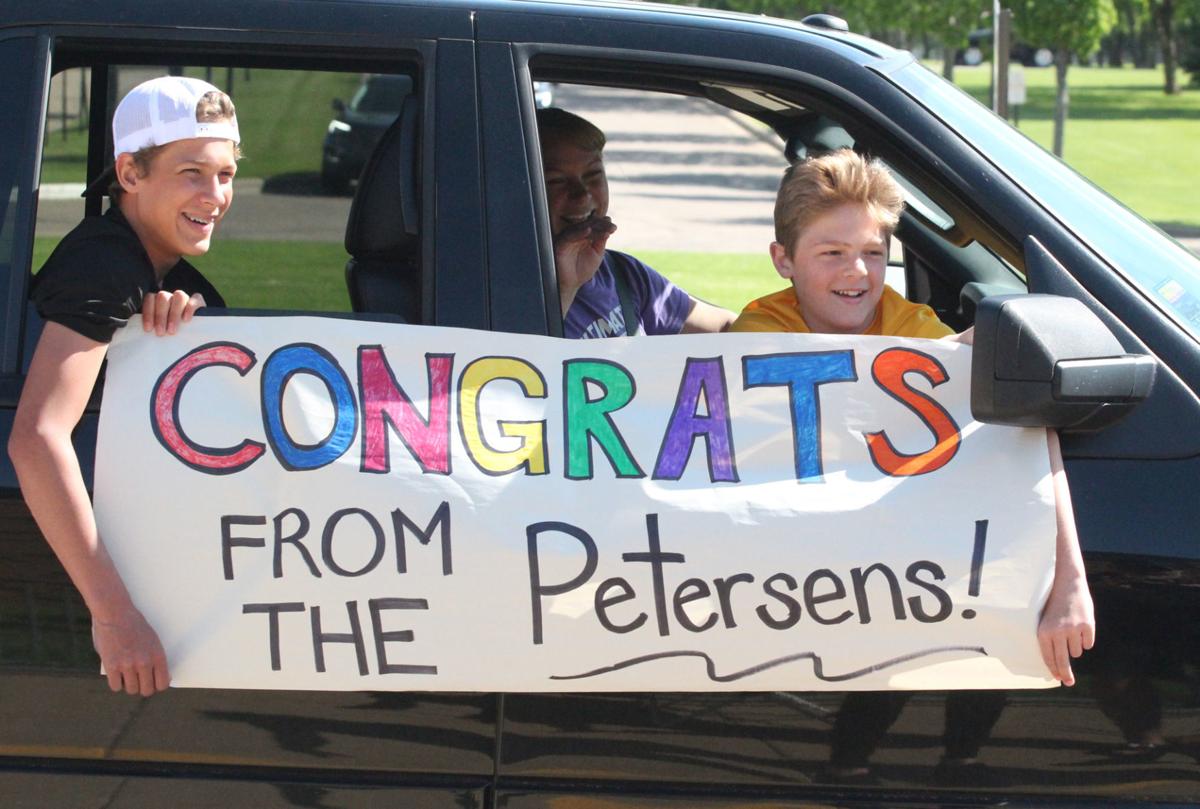 Expressions of love, for former and current students, past and present colleagues, who circled the parking lot at old Chaska Elementary to celebrate the retirement of longtime teachers Barb Kocka and Mary Mobeck. The two teachers have worked together since 1994, the last three years at Carver Elementary.

Mary Mobeck, right, recognizes a car with daughter-in-law Emily and son, Rob, and their two children, near the front of the parade for the two retiring District 112 teachers on May 28. Joining Mobeck was longtime colleague Barb Kocka.

Cars line up from La Academia to Chaska Middle School West to say thanks and goodbye to retiring teachers Mary Mobeck and Barb Kocka (not pictured) on May 28.

After a combined 79 years of teaching, side by side together since 1994, had everyone really forgot that this was it for them? Each retiring following the 2019-20 school year, this was their last virtual meeting with fellow staff.

Turns out, everybody had a little planned send-off in the works, honoring two of Eastern Carver County Schools finest teachers. A car parade that stretched from the circle lot in front of La Academia, formerly Chaska Elementary where the two teachers worked together for 24 years, all the way back to the soccer stadium at Chaska Middle School West.

There were happy retirement signs, horns a blaring, many shared memories, and of course, the Chaska Elementary School song from one car in the parade. There were current and former colleagues, students of old, students of new. All with the same message.

"We really didn't think there was going to be anything," Kocka said.

"At the last staff meeting online the principal was like, everyone have a great summer," Mobeck said.

"And to all the people that are leaving, we say goodbye. We couldn't believe it. That's it," Kocka said.

"So to be back here, with all of the great memories in this building, it was perfect," said Mobeck after greeting cars for 75-plus minutes.

Mary Mobeck was a teacher in the district for 34 years, starting in 1985, teaching multiple grades, mentoring many new teachers and those student teachers trying to become one. She was also active in the teachers union. An all-around leader, in and out of the classroom.

"Mary fostered a nurturing and fun learning environment that gave all of her students a positive elementary school experience," said Katherine Dufresne, district parent, school volunteer, and substitute in multiple capacities, in addition to being one of the event organizers. "Mary made it her mission to make each and every student feel important and recognized."

Asked what she'll do in retirement. "Golf and spending more time with my grandkids," she said.

"Mary is a master teacher who is highly respected for her work in and out of the classroom. She has an exceptional creative ability that engages students in learning, draws her teammates into collaborating, and puts parents at ease," Johnson said. "Her incredible sense for the needs of others is evident at school and in the community and assists in meeting the needs of others with a great amount of enthusiasm and respect. Mary will be remembered for her love of teaching, but more so for the love she has her for students. She will be greatly missed by all!"

"Barb is a kind and caring teacher devoted to her students, their families, and community. Her passion for teaching has shown over the years," Dufresne said.

Kocka also actively participated in the Chaska Valley Family Theatre. Among her loves were the Fine Arts and Theater. Some of her fondest memories with her colleagues and students were creating class plays, and making food boats for the annual boat float, which was a tradition for more than 20 years at Chaska Elementary.

"Barb is a true professional with an immense amount of talent. She understands the value of developing routines and procedures to establish a safe and productive classroom environment. Her positive relationship with students stems from her taking an interest in their learning and welfare and will be remembered by all. She will be greatly missed for all her contributions to her students and our community!" Principal Johnson said.

Kocka said she will also enjoy spending more time with her grandchild. Though retiring has been tough, she said. "(Mary and I) have been crying all week."

Mobeck and Kocka both wanted to give a shout out to all the wonderful and talented teachers retiring this year as well. "It was fun to celebrate the joy with our colleagues, students, family and friends, but I know other teachers retiring are feeling the sense of loss with this 'social distancing' and inability to meet with friends and family to celebrate the end of their teaching careers," Mobeck said.

"We're both kind of workaholics. When we started in Carver, the building didn't open up when we wanted it to. It didn't open until 6:15 a.m.," Mobeck said.

"We had to fight to get them to open it up for us at a quarter to six," Kocka said.

So it was a fitting ending standing outside the building they called a second home for nearly a quarter of a century. Their classrooms just feet away from the parade procession.

"I had kids do videos asking what they each missed and they all said, 'We miss our friends,' 'We miss our teachers.' It just hasn't been the same. Every morning when they run in, hug you, tell you what they did last night, it's hard not having that connection," Mobeck said.

"Not seeing them has been hard. I'm going to deliver little baggies for each kid so I can see them, from an appropriate social distance. I need that closure," Kocka said.

"I think we needed this closure. There was this feeling of 'Is it really over?' and seeing all of these people, seeing all of our old students, this is exactly what we needed to say goodbye," Mobeck said.

In total, 30 teachers, principals and other staff members are retiring at the end of the 2019-2020 school year from District 112.