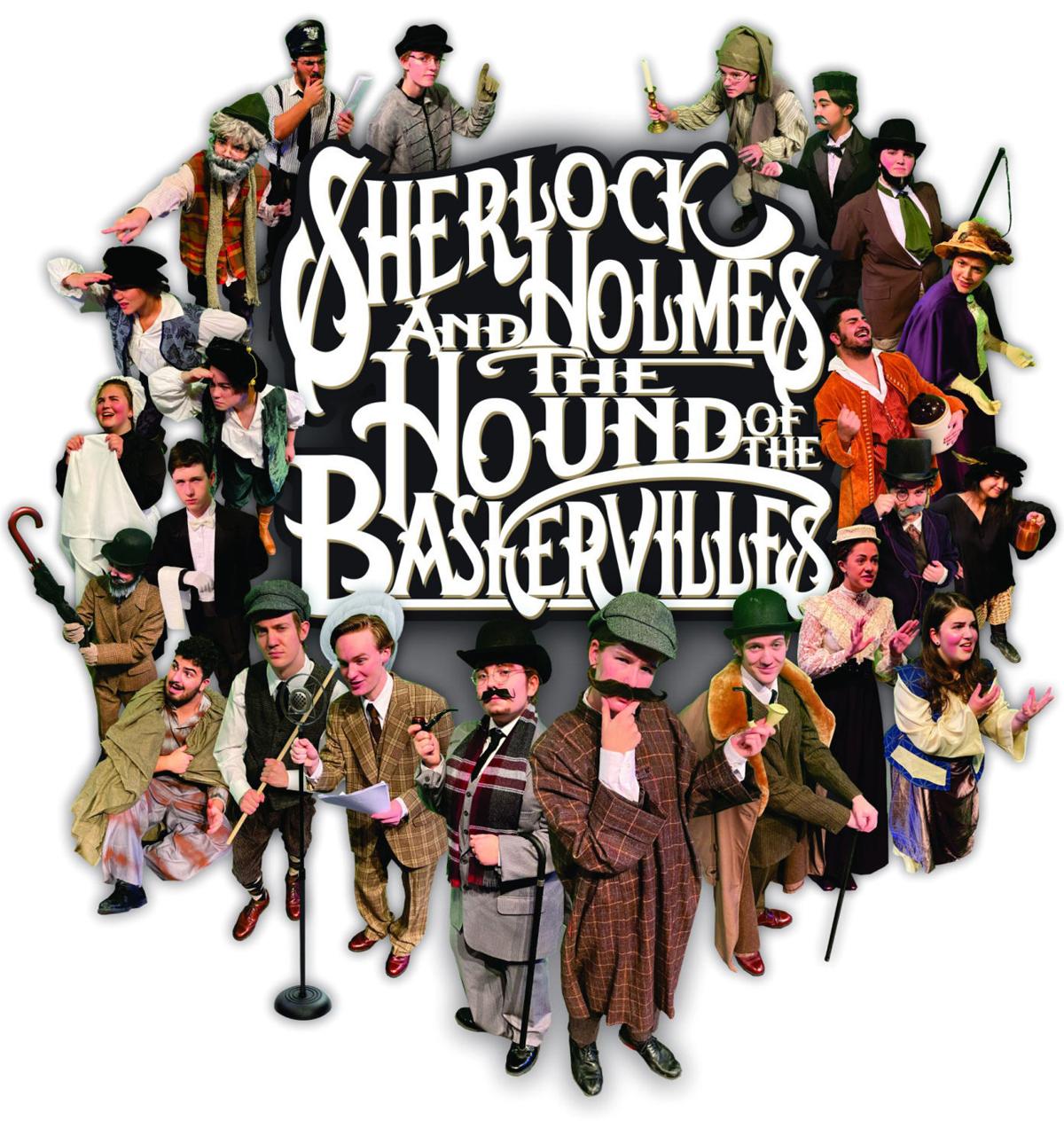 The Fall Musical has gone virtual at Chaska High School with the audio production of the 1936 radio drama, Sherlock Holmes and the Hounds of Baskervilles. 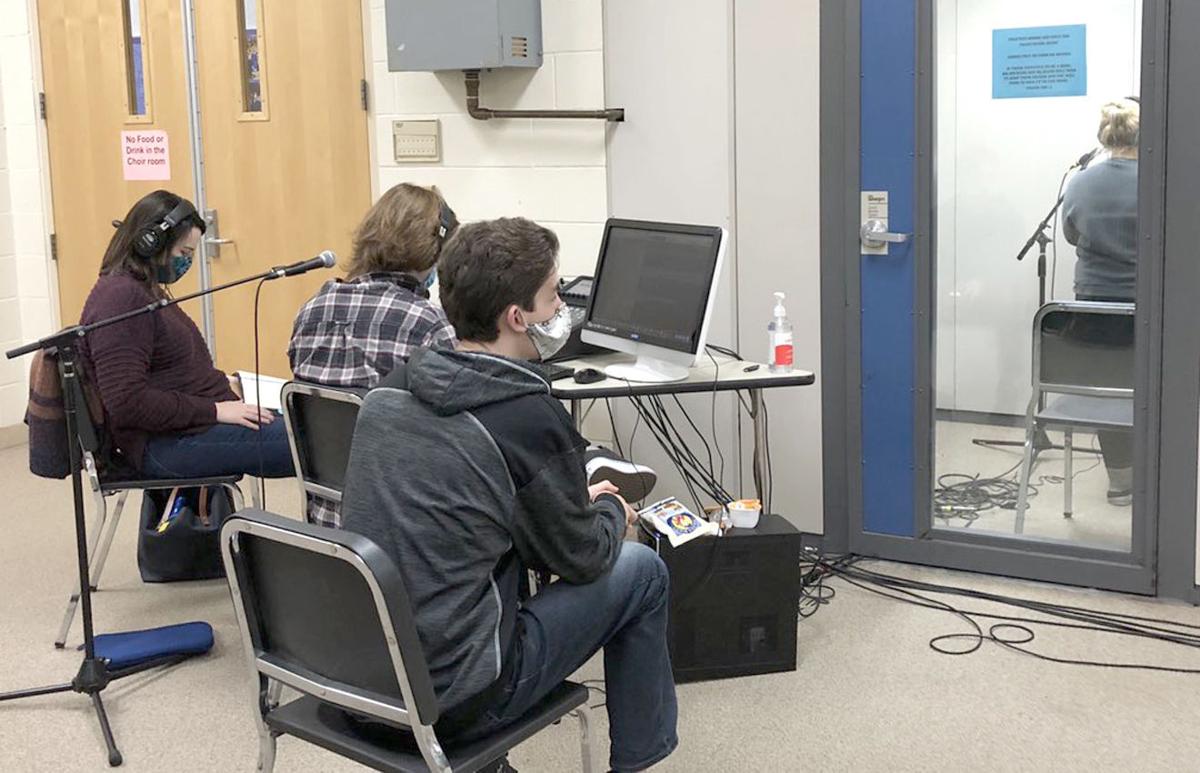 Individual music performance rooms at Chaska High School were fitted as recording studios for the audio production of Sherlock Holmes and the Hounds of Baskervilles.

The Fall Musical has gone virtual at Chaska High School with the audio production of the 1936 radio drama, Sherlock Holmes and the Hounds of Baskervilles.

Individual music performance rooms at Chaska High School were fitted as recording studios for the audio production of Sherlock Holmes and the Hounds of Baskervilles.

The scene is Dartmoor in Devon, a county in England's West Country. It is the early 1900s and Sir Charles Baskerville is found dead in an alley behind his manor.

The original cause of death is listed as heart attack, but Dr. James Mortimer believes otherwise. Baskerville was found with a facial expression of horror, and just steps away were the footsteps of a gigantic hound.

Mortimer calls on the expertise of Sherlock Holmes and Dr. John Watson.

Solving the crime is in their hands.

Welcome to the Chaska High School fall musical, or radio drama performance. Pre-recorded, ready for your listening beginning with the first of six parts on Halloween night and running through Thursday, Nov. 5.

"My favorite TV show is BBC's Sherlock, so it was exciting to hear that I had a chance to audition for Sherlock Holmes," Chaska sophomore Petra Causton said. "Playing Sherlock Holmes or Doctor Watson in any way is so exciting because you know that lots of people have done it before you and now you get a chance to add your name to that list."

"I am a big Sherlock Holmes fan and love reading his books and watching his various film adaptations. So when I heard that we were going to be performing a Sherlock adaption, I was really excited!" Chaska junior Maddy Siekmann said. "Watson is such a fun and quirky character, and I thought that he would be very fun to potentially portray! He is the heart to Sherlock's brain, and he is the comedy to Sherlock's drama. If I can brag a bit, Petra and I both fit our roles closely in real life, and it was a lot of fun to play off of and work with one another."

With COVID-19 not allowing for normal productions and audiences, Meredith Kind, fall musical director, and theater students, pivoted. They obtained rights through the generosity of the University of Minnesota's library to the original 1936 radio drama, Sherlock Holmes & the Hounds of the Baskervilles.

Kind, who has a professional contact in the Sherlockian society, The Red Throated League -- a group that performs locally -- was able to secure the script to the Edith Meiser adaption.

"In the spring I was working on three different shows with three different high schools and when things shut down, I said what can I still do to enrich students? This production is something I've been planning for since April. Generally with high school theater, you're using established work, as you're trying to grow the knowledge and appreciation of theater with your students," Kind said.

Voice acting is something many professional actors are relying on today, Kind said, so having this experience is just another part of broadening their palates.

"As an actor, this show has been an amazing experience because we have gotten to focus on many different aspects of our acting. We learned a lot about our voices and how to make a character's voice unique and we had an amazing time learning different accents and dialects," Causton said. "Meredith is an amazing director and we all love her. She puts on fantastic productions, while also looking out for our health and well being."

The Chaska Theater performance, recorded over several days in October, will be available to watch on the organization's You Tube Channel. The community is invited to take in the performances from the comforts of their own homes, at their own availability.

"The fall musical is always one of the highlights of my year, and although I understand completely why we were not able to be in-person, it's still a bit disappointing. But, when I heard that we were still going to be having a virtual production, and that it was going to be an authentic 1936 radio show, I was super excited! The chance to try a whole new form of theater was really intriguing, and this whole process was an opportunity I would not have normally had if not for COVID shutting everything down!" Siekmann said.

Kind said it wasn't her original idea to cast two women as Holmes and Watson, but with only three female roles in a cast of 20 or so, "these two ladies knocked it out of the park," she said.

"I was super excited when I found out we were doing this show. I really love listening to scripted-fiction podcasts so I was thrilled to get an opportunity to do some voice acting. It has been a great experience and I am so glad that I got to be a part of it! I am, however, a little disappointed that we only got to 'perform' it once. Doing musicals over and over again is surprisingly fun!" Causton said.

Kind used cold readings, or actual parts of the script, to audition actors. She gave them six characters and asked them to pick two that excited them and to record those scripts for her to view.

She said all of the actors did an amazing job taking her instructions to heart.

A callback series confirmed the right actors for the right roles.

"You have challenges for every production, it just takes different forms. We had many, many talks as a production staff. We usually start the first week of school, or maybe even the week before school starts. This year it wasn't until the second week of school that we were told, 'it's a go,'" Kind said.

Different aspects were implemented through the process, including the British accent.

"Every member of the cast recorded our lines in an accurate British accent. Our amazing director Meredith is trained in Dialect Coaching, and she worked with each of us to transform our voices! Another really fun aspect was that many of the ladies of the cast, Petra and Myself included, played male characters. We all had to work on making our voices sound like a guy, which was another fun and exciting challenge," Siekmann said.

It was that engagement level that Kind will always remember with this production.

"They were here, they were excited. That creative stimulation flowed. That sense of community was there when we did the rehearsal with the kids. They had this feeling that we did the writing, we did the original work, we dove into the character, this is ours," Kind said.

THE SAME, BUT DIFFERENT

What sets the performance apart from past shows is originality. Kind, who also is in charge of One Act Play, saw that passion from some members to write their own scripts. To inject their own performance artistry into the work.

Kind brought that aspect into the radio drama.

Each of the six scripts opens and closes with commercials. She said with the originals not trademarked, students were able to research what was popular, what was new -- see electric razors -- to create their own work.

And while the performance is entirely audio, costumers did costume work as usual. Actors were fitted for promotional shoots, those photos being used at times during the audio performance to help the listener visually on You Tube.

Additionally, the tech crew was more involved. In addition to building sets for practical sound effects, such as a door that opens or a wheel contraption to mimic the sound of a carriage, the team also helped record the actors' audio.

Kind said a generous donation of recording equipment from AVEX Minneapolis -- the only cost to pay for a technician to help install and take down the equipment -- added to the professional final product.

"I've really noticed during this pandemic artists really stepping up for each other, helping and supporting each other out," said Kind.

The production also included original music from two talented students: a five-to-six note ditty to open and close each script; and some creepy, ambient music that plays in mysterious parts of the performance.

"I am really glad we were able to make it work. I really think it will be a fun experience for the community. For the actors, this was a unique experience attacking a production with a different angle. While it's virtual, it still feels hands-on, said Kind.

"My greatest hope is it reaches people in the community. They get excited by this, they understand what theater programs like this have to offer. I hope it is a fun escape to hear a really awesome story. To find some moments of peace in what will be a crazy week with the election," she added.

Seven o'clock will feel weird on Halloween. It's showtime, but the performance is already complete for actors.

"I already feel like we are done with the show. We are done recording and now it's all in the hands of our amazing sound technicians," Causton said.

That doesn't mean the emotions that come with a successful show won't appear this coming week.

"If we were doing a live musical, our stress levels would be way higher right now. It's nice to be done, but it is much more thrilling to perform live. Overall, I am so grateful for this experience! It was so fun and so beneficial," Causton said.

"I just about started crying when we recorded the final scene! Every production, either in-person or virtual, requires so much hard and love-filled work. From the costumers, the lights and sound team, the props and set people, to us actors, we all pour our heart and soul into every CHS Theater Production, and when they are over, it's always bittersweet," Siekmann said. "But, there is always another show on the horizon, and another opportunity to do the thing we all love: Making theater magic."

Subscribe to the Chaska Theater Presents! You Tube Channel for notifications when all six performances are ready for viewing beginning Oct. 31 and running nightly through Nov. 5.