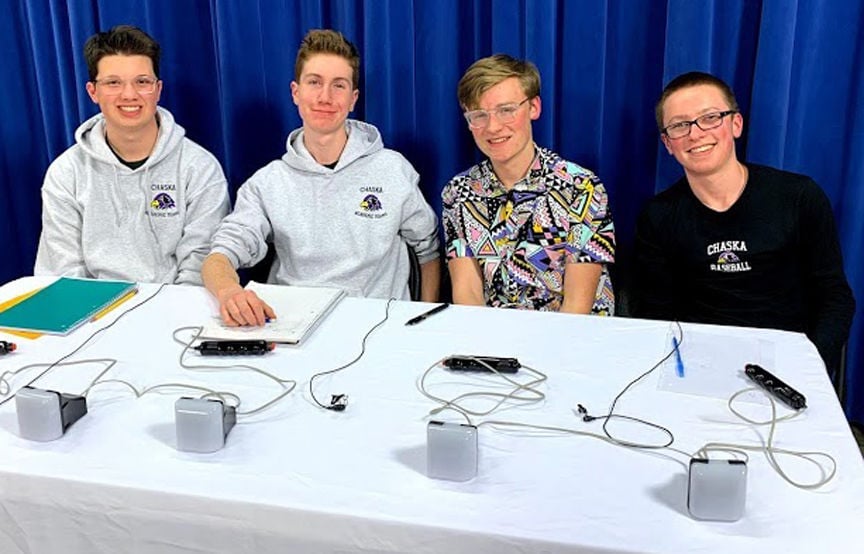 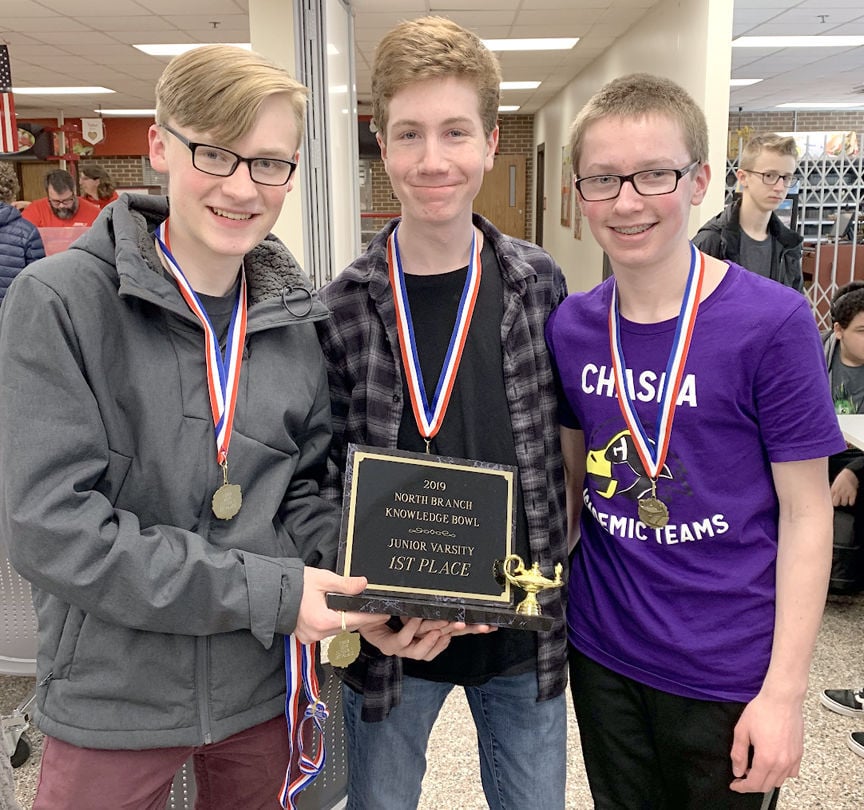 Jamie Lyman, Rand Bovard and Reilly Melville won a competition in North Branch as underclassmen in 2019 for Chaska High School.

If members of academic bowl teams around the country found themselves watching "The Greatest of All-Time" tournament on the game show Jeopardy last January, they would have been pulling hard for the underdog.

Brad Rutter got his start in the quiz world on an academic knowledge bowl high school team in Pennsylvania. He was a previous host of InQuizitive, a local broadcast quiz show for high school students. He has also been a reader and judge for the high school National Academic Championship.

The eventual champion of champions, Ken Jennings, also a former quiz bowler in college, defeated James Holzhauer and Rutter for the title.

Another former Jeopardy participant, Peter Buchholz, a sixth-grade U.S. history and language arts teacher at Chaska Middle School West, was a semifinalist in the 2016 Teachers Tournament. It was Buchholz who helped introduce Reilly Melville and Jamie Lyman to quiz bowl.

"You were always beating me back then, too," Lyman said.

"That's not true. Not always. There was a time in the early years you beat me a bunch. It was good motivation," Melville countered.

Asked if Melville was being modest?

While winter athletic teams are paused, the 2020-21 academic seasons were set for virtual from the start. Sadly, bus rides across the metro area to competitions, regular stops at Culver's in downtown Savage, are on hold.

"It's definitely different. It varies based on what you're doing. Different bowls use different platforms. Knowledge Bowl uses Discord. Quiz and Science Bowl both use Zoom. Quiz Bowl feels very similar to what it was before. We're really lucky here in Minnesota. Really the guy who used to run the national quiz bowl competition, lives here in Minnesota. Organizers have done a great job responding virtually. So far it's gone off without a hitch," Melville said.

An app on participants phones acts as a buzzer for quiz bowl games.

In quiz bowl, two teams of four players face off head-to-head. Each player holds their own buzzer. The reader asks a toss-up question and any player may press on their buzzer at any time. That individual player must then answer immediately, without consulting with teammates.

In knowledge bowl, three teams of four players each compete in a room. The reader asks a question as teams listen. Any player can buzz in at any time by pressing the strip on the table which is connected to the score box. The reader then stops and the team has 15 seconds to discuss before they give their final answer.

Melville said the largest group of participants is found on the knowledge bowl team. "There is more of that team aspect, more of the camaraderie with knowledge bowl," he said.

Science bowl is similar to quiz bowl with two teams of four players and individuals answer without the help of teammates. Major topics in science bowl include chemistry, physics, biology, earth and space science, energy, and math.

WHAT MAKES A GREAT TEAM

Melville explained the importance of having teammates that specialize in certain academic areas. When there's a question on literature, Melville, tries to steer clear or the answer Laura Ingalls Wilder may come out.

Melville is the history guy who dabbles in geography, current events and theology.

Lyman, who had older siblings involved on academic teams, is a math and science guy with some advanced knowledge of philosophy and religion. Teammates also credit him as their fine arts expert.

"If the questions starts with 'this opera,' I take my hand off the buzzer," Bovard said.

Bovard is the science and literature guy. He admits science is his strongest, though Lyman said Bovard is being humble and he is the best literature player of the three.

Bovard didn't get his start on academic bowl teams until high school.

"My mom was always was telling me to join in middle school, but practices were in the morning at like 6:30 and I was never going to get up that early. With high school, it's after school, so I tried out knowledge bowl first and then the next year I joined quiz and science bowl and I loved those even more," Bovard said.

Chaska's top team has a new fourth member this school year in junior Eliana Hanson. Another wiz in literature.

Quiz and Knowledge Bowl each have three virtual league meets this season. Week one is in the books. A science bowl state tournament is set for Jan. 23, 2021.

Each team practices for an hour once or twice a week. They split up into teams and play against each other.

"What tends to separate our best players is they spend time outside of practice. They go on the Internet, look up something they're interested in, sit on Wikipedia for an hour and see what you learn. They read books. There are some websites for quiz bowl like Protobowl. It's about just playing the game, gaining that experience. You start to hear the questions over and over again," Melville said.

"With Knowledge Bowl, we spend some time on strategy. When should you buzz in. Another big thing with practice -- I can speak for Rand and I at least -- we will make frequency lists. Maybe the top 100 artists. Or top 100 authors. Or 1,000 works and who wrote those. We'll make quizlets and we quiz ourselves on them," Lyman said.

Despite being virtual, numbers are up in the program this school year.

"The captains did a pretty good job recruiting this year," Quiz Bowl coach Tucker Besel, a science teacher at Chaska High School, said. "In years past, they made business cards to pass out to kids, to have teachers distribute. Even if teachers don't understand all of the nuisances of these teams, they understand who might do well in these settings. Getting that acknowledgement from a teacher, you should try this out, whether it's me, Ms. (Naomi) Jones, Ms. (Kelly) Dreier, other teachers that are driving students to us, is a motivating factor to join. Once you get them in, they're hooked."

"Academic Teams, specifically Knowledge Bowl and Quiz Bowl has a long history at CHS, and a lot of its legacy is owed to Chris Lenius, long time coach and player. He retired from coaching a few years back, and handed it off to Tucker and I," Jones, a Chaska High School English teacher, said.

Last year's Chaska Knowledge Bowl team consisting of Parker Bakke, Bovard, Lyman, and Melville had qualified for the state tournament and were poised to do well, but like everything else, was sadly cancelled, Jones said.

The Quiz Bowl team also was in a good position having qualified for nationals.

"This year, we are so happy to be meeting virtually! Even though we're far apart, it feels so good to be building an academic teams community," Jones said. "We have a lot of new players this year, both ninth grade students and a few people who have decided to join as sophomores or juniors. We have an interesting mix of lots of 'veterans' and lots of new faces!"

The program also has the help of new virtual coaches -- former Chaska players themselves -- in Rory Bartels, who is attending the University of Central Florida, and Jacob Mapstone, who is coaching from John Brown College in Arkansas.

Bartels and Mapstone were part of a Chaska team that competed at nationals in 2019 with Bovard, Bakke and Melville.

Academic bowl teams aren't the only clubs active through this pandemic, which has paused in-person learning throughout the District.

Swearingen said FIRST Robotics is moving ahead with a virtual season as well. "What that will look like when we can’t allow student 'gathering' is vague," he said. "Student council, National Honor Society, STLF/International Club (at Chanhassen), and Key Club are all trying to do virtual community service as best they can."