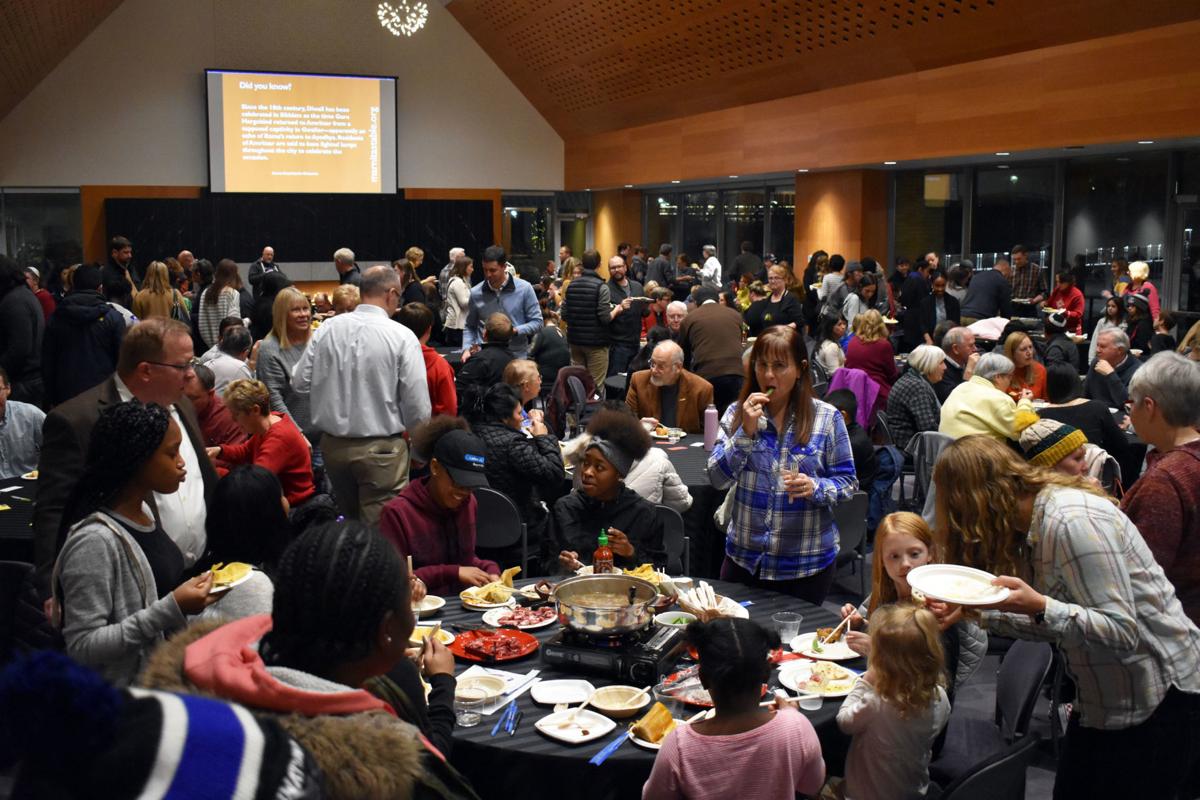 Organizers say about 260 people attended the Marnita’s Table event on Dec. 5 at the Chaska Event Center. Conversation cards were found at the tables with questions like: “What can you do or say to make another person feel comfortable if they are in the minority?” 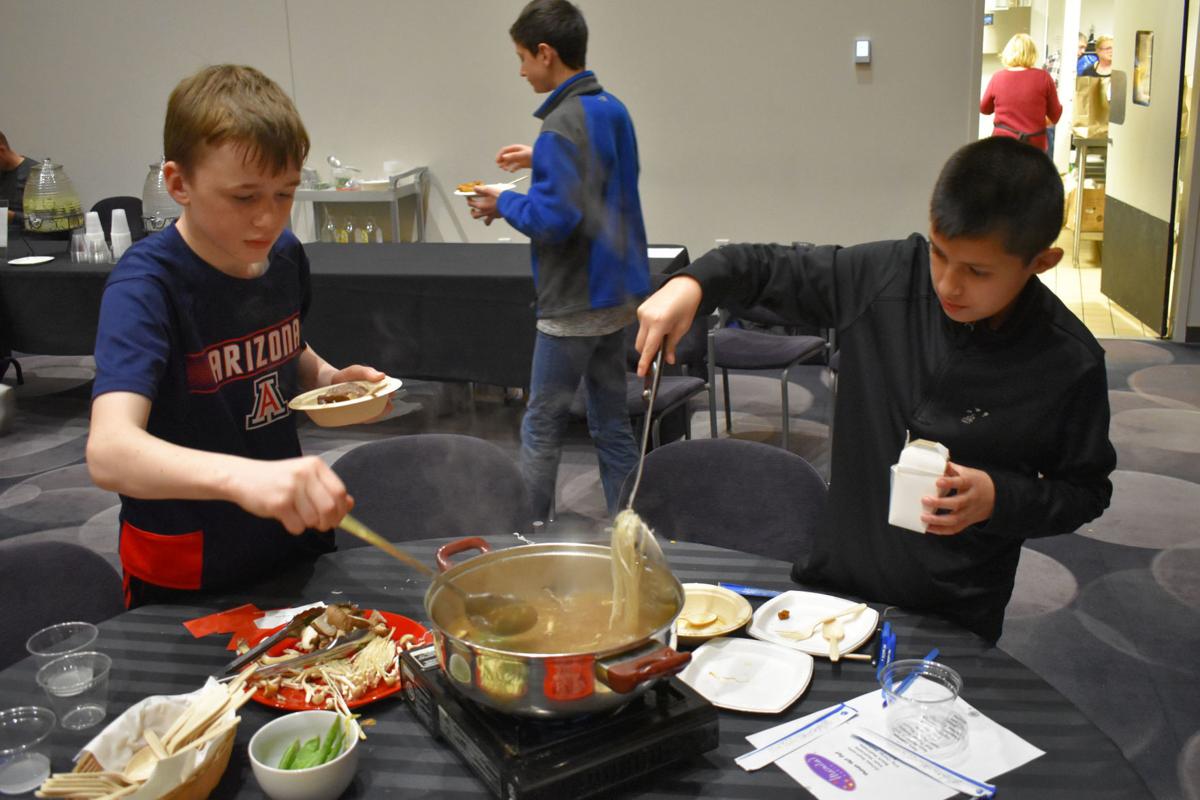 Organizers say about 260 people attended the Marnita’s Table event on Dec. 5 at the Chaska Event Center. Conversation cards were found at the tables with questions like: “What can you do or say to make another person feel comfortable if they are in the minority?”

Depending on the time of night, those walking past the Chaska Event Center on Dec. 5 probably saw a bustle of activity inside: People hopping between tables in a crowded room, helping each other dish up food, or arranging themselves into groups along the walls.

Organizers said about 260 people attended the Marnita’s Table celebration that night. Most hailed from Chaska, but some visited from neighboring cities or traveled from as far as Nigeria and the Netherlands.

Marnita’s Table is a 15-year-old nonprofit with a mission to include marginalized people in a neighborhood, in policy, and at the table.

What may have seemed like a large holiday celebration of close friends was, in some cases, just the opposite. Its mission was to bring neighbors — friends and strangers alike — together for a sense of cultural understanding and camaraderie.

“Tonight, I want you to all be my very co-conspirators,” said Marnita Schroedl, CEO of Marnita’s Table. “We’re going to grab more chairs. Keep welcoming people to your table, keep cooking broth together, get to know one another across age, race, ethnicity.”

“The food? Sambusa! And I don’t know what they call this — rice? I like the salad because it’s mixed with a vegetable,” said Cheikhane Fassa, 35.

But the event was meant to go beyond the cuisine, using it as an epicenter for meaningful conversation and mingling. The three-hour celebration let neighbors come together and learn about different cultural holiday traditions.

“We’re all brothers and sisters here together, eating,” said Olga Arias, from Chaska. “This is a good thing.”

Throughout the night, Schroedl offered instructions through a microphone. She first asked people to gather in groups based on how long they’d lived in Chaska, showing the diversity in each cluster.

Up next was generational diversity when people assembled by age. The groups, Schroedl said, illustrated just how varied Chaska is — ranging from the Silent Generation to Generation Z.

“There’s a lot of people. It’s not just about young people,” Chaska Mayor Mark Windschitl said of the exercise. “It’s amazing who’s here to learn about how we can all get along better.”

Later in the evening, those sharing a table were asked to read prompts to get to know one another's hobbies, cultural traditions and how they celebrate the holidays.

Windschitl said the city and school district heard about Marnita’s Table this year. Officials wanted to move forward with an event celebrating diversity after a string of racially charged incidents in Chaska. He said city staff have been taking on more diversity training, and this is a part of that process.

Some neighbors say while it’s a great event, it’s happening too late.

Chaska resident Cheyenne Barlow said events or conversations like these should have happened before the city’s recent racial matters, but she’s glad to see things are moving in the right direction.

“I wish it were something they would have started a long time ago, not just now,” she said.

Schroedl went through the foster care system as a baby and grew up as the only black girl in an all-white town, she told the room. That was her fuel for creating Marnita’s Table.

“Nobody should ever feel as unwelcome or unwanted as I did as a child,” she said.

Neighbors at the event said her mission came through strong.

“Look at the children, look there. They’re playing,” Fassa said, watching a group of children play with toys in the room. “We meet a lot of people, you talk. It’s important. It’s very important.”

Fassa heard about the meal through one of her English classes at the Family Learning Center.

“(I’m) at this event for enjoying the people who believe in Chaska,” she said.

Others came to reach out and find a sense of belonging. Kelly Brenney is one of them.

“To be honest, as a person of color I’m kind of just looking for people,” Brenney said. “It feels lonely sometimes.”

Some attendees used the night as a chance to meet their neighbors. It was a no-brainer for Jeff Stone, who lives in Clover Ridge.

“One year ago I didn’t have any Somali friends, and we have a lot of Somali neighbors,” Stone said.

He's since become close to his brother's neighbor, getting together for tea and attending events like this together. He came to Marnita’s Table to keep making those connections.

Mayor Windschitl said the night was a learning process for him and he’s looking forward to the next Marnita’s Table event in February.

“I came in here, really, with no expectations,” Windschitl said, looking around. “The electricity in the room is just crazy.”

He said the room was more filled with people he didn’t know, which was the goal of the night: Come as you are and leave as you are — with newfound understanding and maybe even a new friend or two.

Chaska's next Marnita's Table event will be 6-9 p.m. Tuesday, Feb. 18 at the Chaska Event Center.