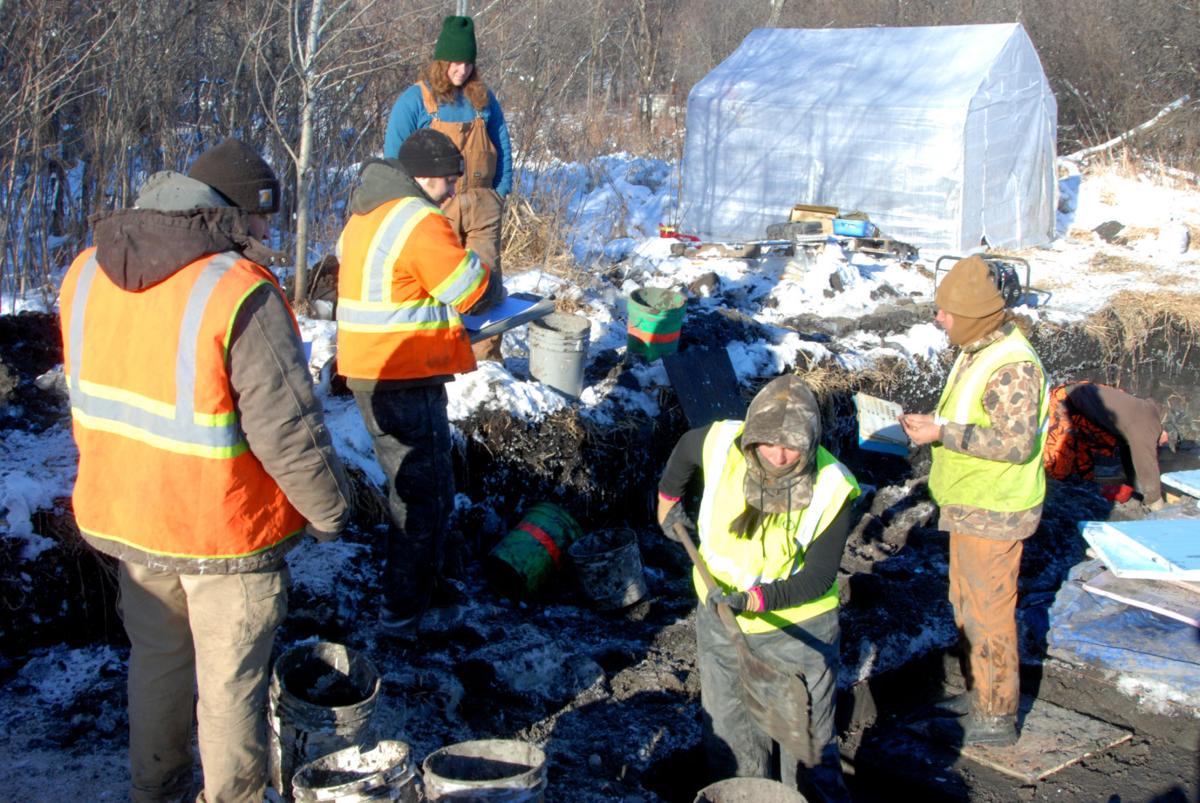 Archaeologists search for artifacts at a Chanhassen site in December 2013. 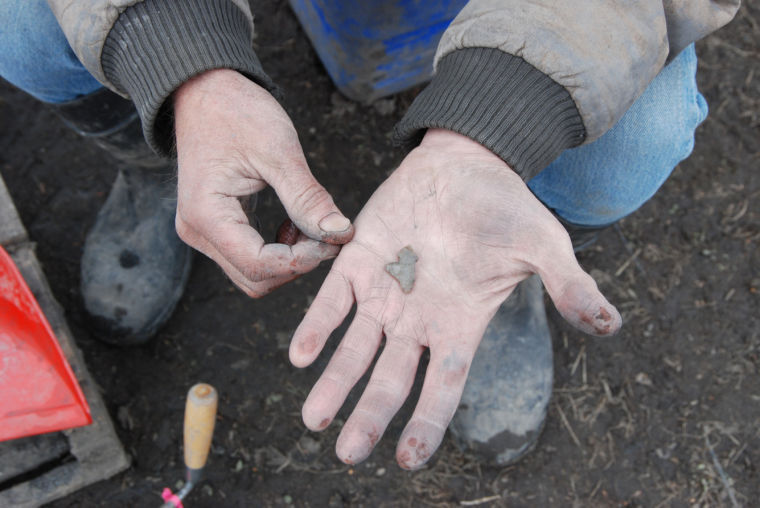 Archaeologist Kent Bakken holds the base of a dart, discovered in 2014. 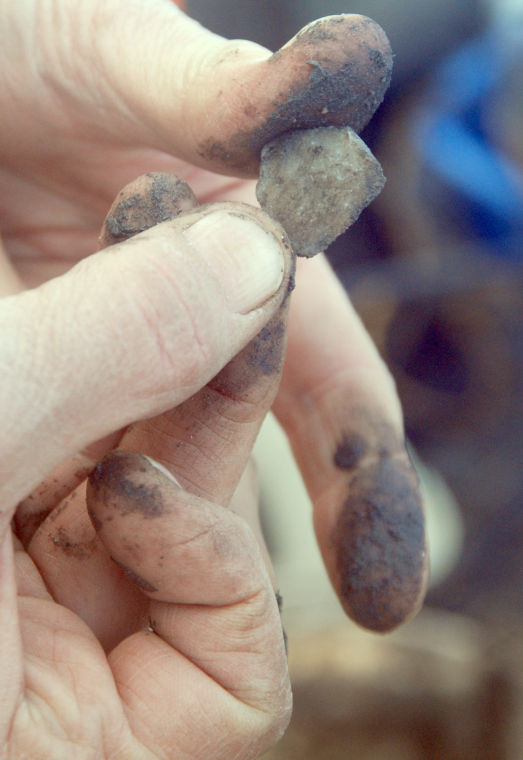 Archaeologist Kent Bakken holds a stone chip that came from the making of tools. 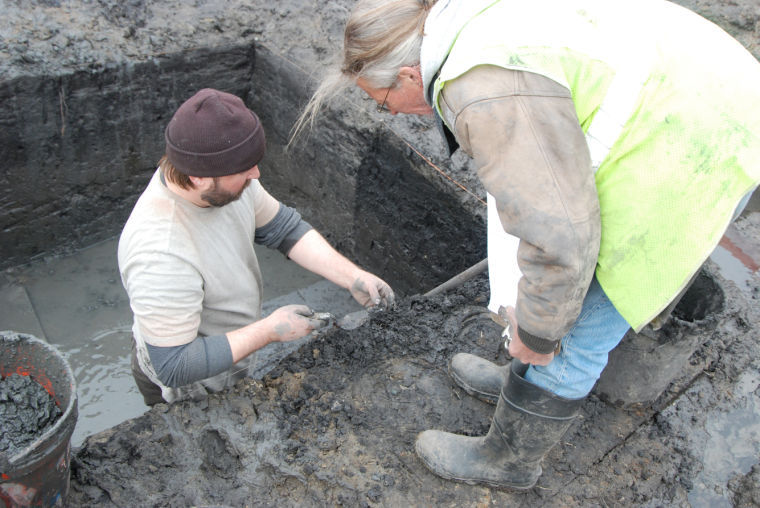 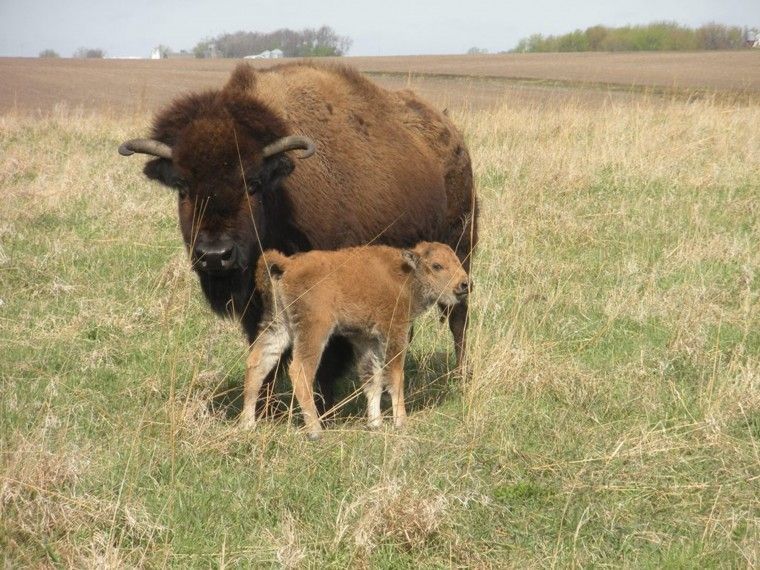 Bison bones were found during an archaeological dig in Chanhassen.

Archaeologists search for artifacts at a Chanhassen site in December 2013.

Archaeologist Kent Bakken holds the base of a dart, discovered in 2014.

Archaeologist Kent Bakken holds a stone chip that came from the making of tools.

Bison bones were found during an archaeological dig in Chanhassen.

The archaeologists labored for months in muddy, flooding pits, often in sub-zero weather. Fragment by fragment, they carefully unearthed and catalogued thousands of artifacts.

Now, almost two years after completing fieldwork in Chanhassen near the new Minnesota River bridge, their hard work is bringing the past to life.

Researchers are discovering new clues to how residents of the Minnesota River Valley lived, what they ate and how they networked about 7,000 years ago.

“I hope that people can appreciate how you can take some pretty ordinary, not very impressive-looking remains and coax all sorts of information out of them,” said Kent Bakken, field director of the archaeology project.

The researchers, with Florin Cultural Resource Services, LLC, have spent months cleaning, organizing and analyzing about 4,000 artifacts. They’ve taken soil samples, conducted radiocarbon dating of burned bone, studied the origins of the stone tools and sent bones to the University of Wisconsin-La Crosse for animal identification.

Bakken will describe some of the findings at a presentation at 1 p.m. Saturday, Jan. 23, at the Chaska Library.

The archaeological work preceded construction of the massive $54 million County Road 101 bridge that connects Chanhassen and Shakopee and was completed late last year.

As part of a federally mandated process, from 2012 to 2014, researchers identified, then excavated, a handful of archaeological sites, before they were covered or destroyed by road construction.

Researchers discovered bones, stone tools and evidence of a hearth that indicated the remains of an ancient campsite.

Following months of research, archaeologists have determined the age of their findings. The artifacts came from these periods and times: Late Woodland, 500 years ago; Late Archaic, 3,000 years ago; and Early Plains Archaic, 6,100 years ago and 7,100 years ago (two artifact deposits).

The Early Plains Archaic site from 7,100 years ago has provided the most artifacts, including stone tools or stone chips originating from various areas of the Upper Midwest. Stones were carried as far as 400 miles to the site, from central North Dakota.

“Now, think about all of these groups of people scattered across the northern Plains, from the mountains in the west to the edge of the great forests in the east. They are moving around, they run into each other on a regular basis, and probably have standing plans to meet up in larger groups at some point in the year. (Think family reunion, trade fair, opportunity for the young adults to meet and court.) There are probably also people moving between groups, or sometimes groups splitting up, forming new groups with different members, and so on,” Bakken said.

“In all of this moving around and running into each other, there’s probably a lot of gifting and exchange: ‘We just killed a bunch of bison, here take some meat.’ ‘Can you spare a cup of pemmican?’ ‘If my son who can’t get along with his cousin can stay with you for a year, we’ll send him with a few buffalo hides.’ ‘I just ran into a guy who had a friend who has a cousin in North Dakota and he gave me these dart points with the good Knife River Flint tips. Have you ever seen such nice stone?’”

“It tells you that they’re well-connected, not just living in their little corner of the Minnesota River Valley, unaware of the bigger world around them,” Bakken said.

Early Plains Archaic artifacts point to the area as a location for short-term camps, Bakken said. “These groups were coming to the site from time to time, staying a little while, leaving a few artifacts and some broken bone, then moving on,” he said. The 101 site would have provided shelter, fresh water and forests.

“Each time they camped there they would set up in a little different location, so there gets to be a broad artifact scatter with no clear focal point, and with light to moderate artifact density,” Bakken said.

“To help clarify this, it helps to think about what this site isn’t. If we were looking at a wild ricing camp in northern Minnesota, for example, we’d see that a lot of people showed up and stayed for several weeks. They’d leave a lot of artifacts, and we’d see internal structure in the site. For example, in one part of the site they’d set up shelters, in another part they’d dig holes to use in threshing the rice, in another there would be fires for parching the rice, and so on. But that’s not what we see at the 101 site,” Bakken said.

In fact, he said, putting down roots wasn’t in the cards for the Early Plains Archaic humans.

“These were highly mobile populations. It seems they didn’t settle down at any one place for long, and just about all of their sites seem to relate to hunting bison, butchering bison, processing bison meat and bones — and so on.”

Bison remains are a key discovery in the 101 dig.

Archaeologists didn’t find whole bones, Bakken said. They found mostly small and large fragments. This, in itself, is a clue.

“When bone is this broken up, it suggests that the bone was intensively processed. The most sensible explanation for this is that they were extracting bone marrow and maybe even bone grease,” Bakken said. “Marrow is nutritious, high energy food (not to mention really tasty), and bone grease is one of the main ingredients of pemmican. Pemmican is made from dried meat, berries and bone grease. It is also nutritious and high in energy, it keeps well, and it’s easy to transport. Very valuable for a mobile group.”

The 101 dig adds to a growing amount of research pertaining to the Early Plains Archaic period.

However, for Bakken it also adds more questions, like how the culture spread rapidly across a vast area.

There’s more evidence to be found. “(Researchers are) only starting to figure out, there’s an awful lot of archaeology buried in the Minnesota River Valley. We missed it before. We weren’t looking deep enough,” Bakken said. “You have to work pretty hard to find it.”

From 2012 to 2014, archaeologists worked to uncover a handful of archaeological sites near the Minnesota River bridge in Chanhassen. This phot…

Archaeologists recovered more than 4,000 artifacts including:

Kent Bakken, field director of the Chanhassen archaeological dig, will recap the challenge of digging 11 feet into a swamp in the middle of a Minnesota winter. With visuals, he’ll discuss the recovered artifacts that shed light on life in the Minnesota River Valley and on the Plains during the past 7,000 years.