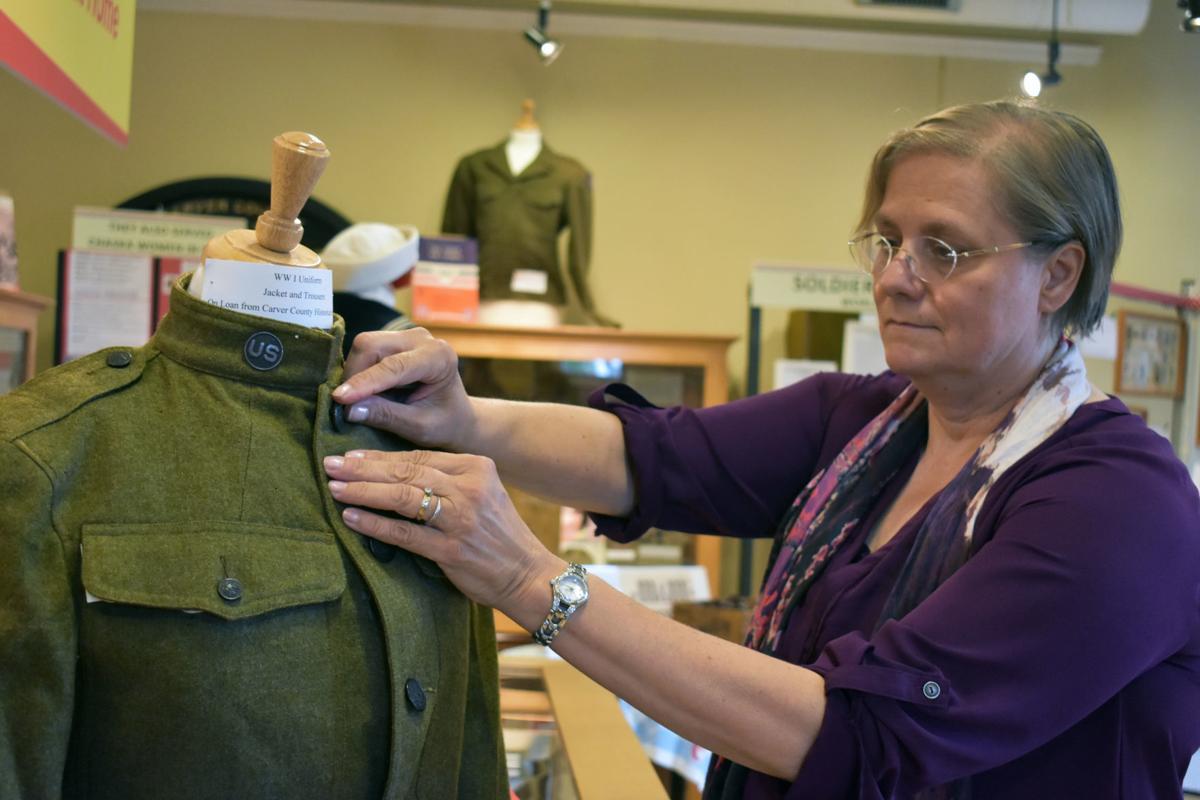 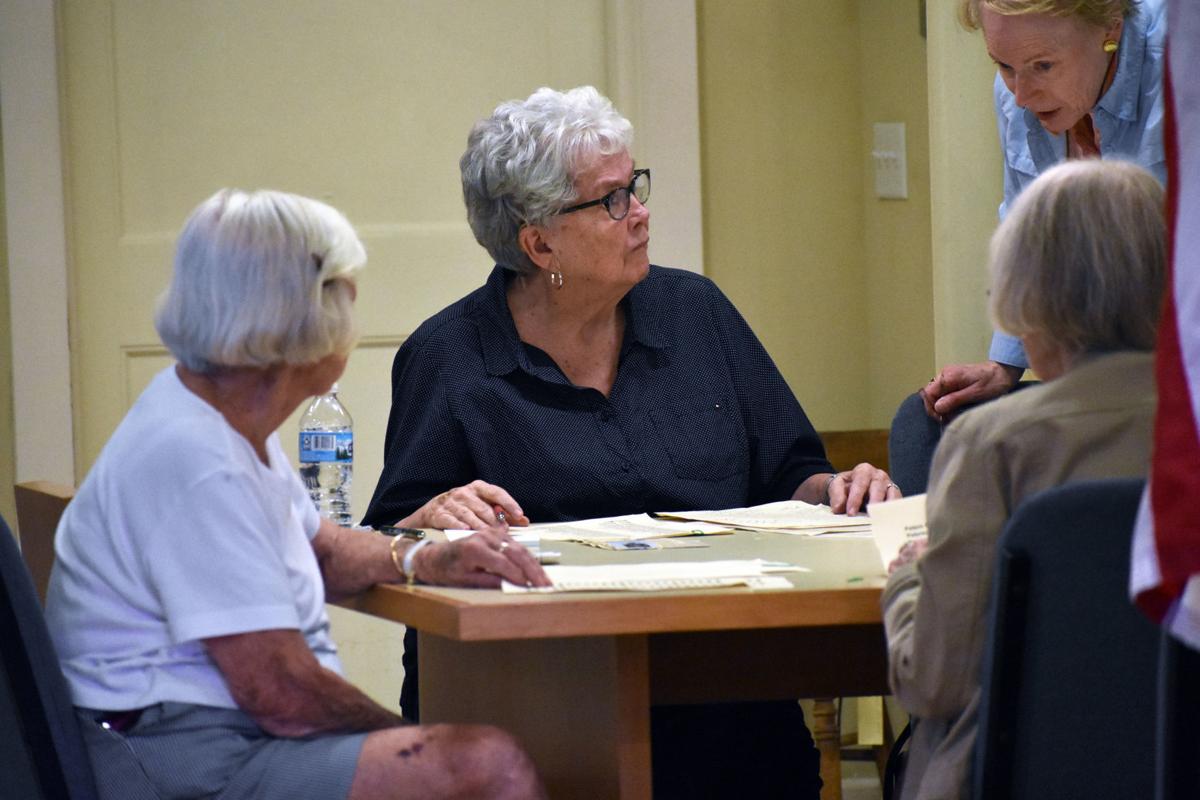 Chaska History Center volunteers are still finding names to add to a list of those who served during WWI and II. At center is Tracy Swanson speaking to Jeanette McGillicuddy, top right. 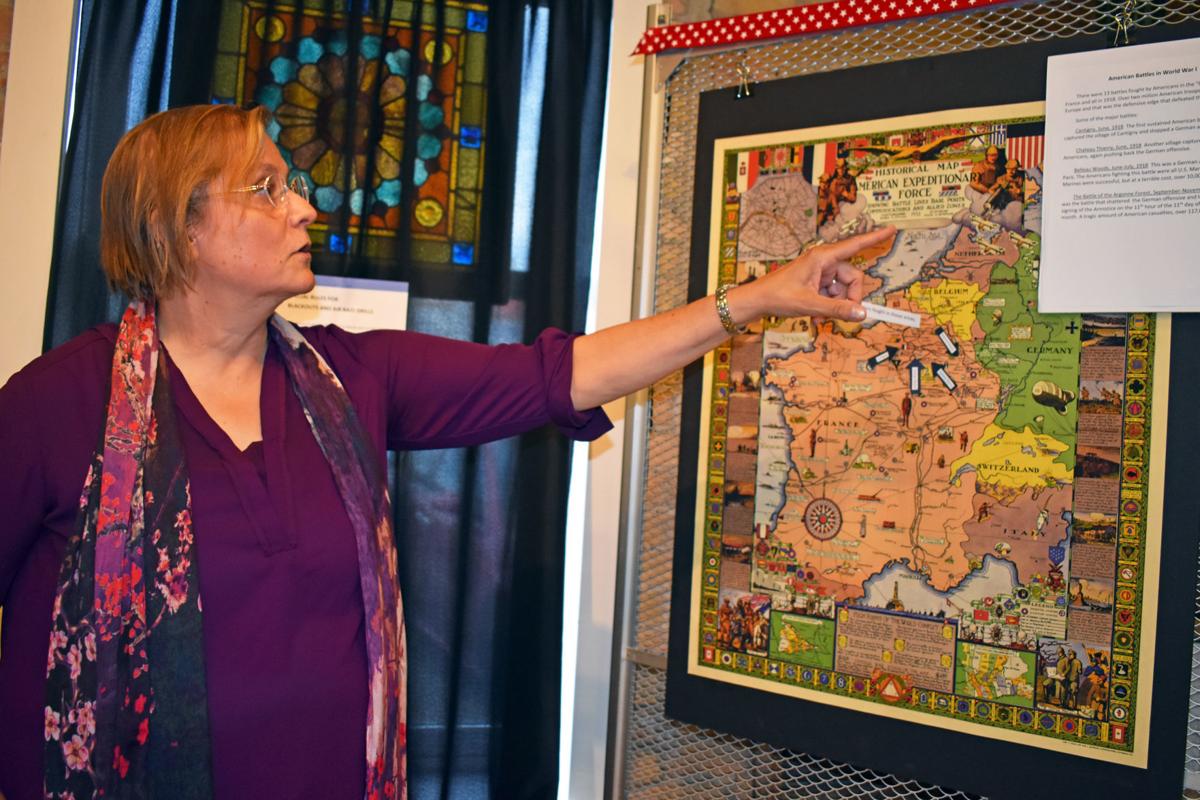 Volunteers composed a map of where people served during WWI, said head of research Jayne Odden. 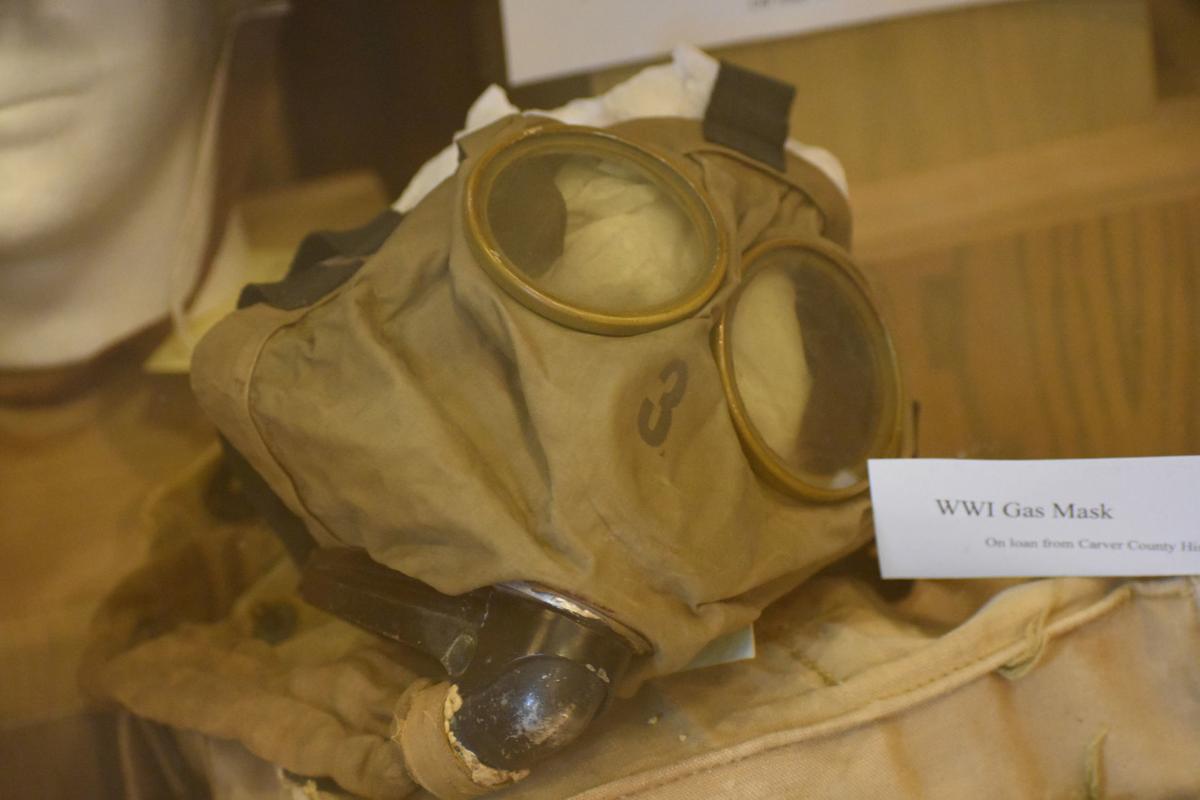 An old gas mask from WWI is on display at the Chaska History Center. 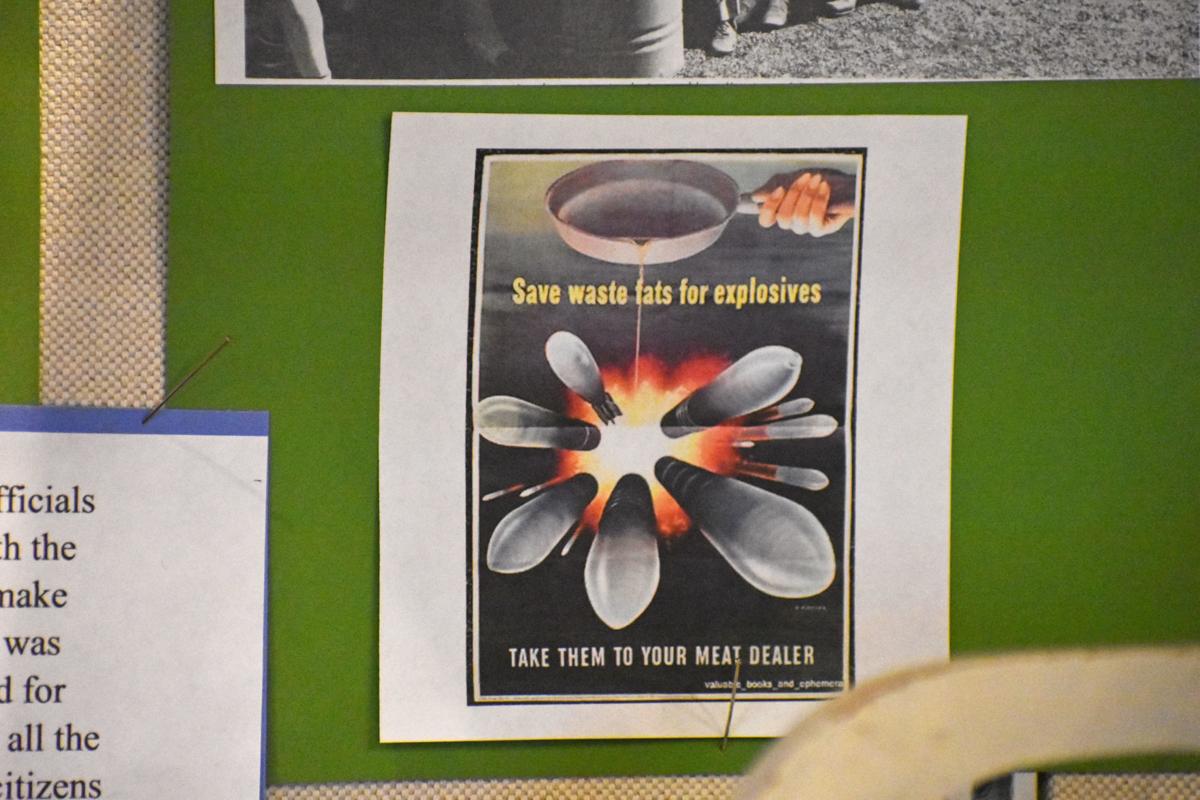 Food and sugar were rationed and old metal scraps and cooking oil were collected to produce weapons, during the world wars. 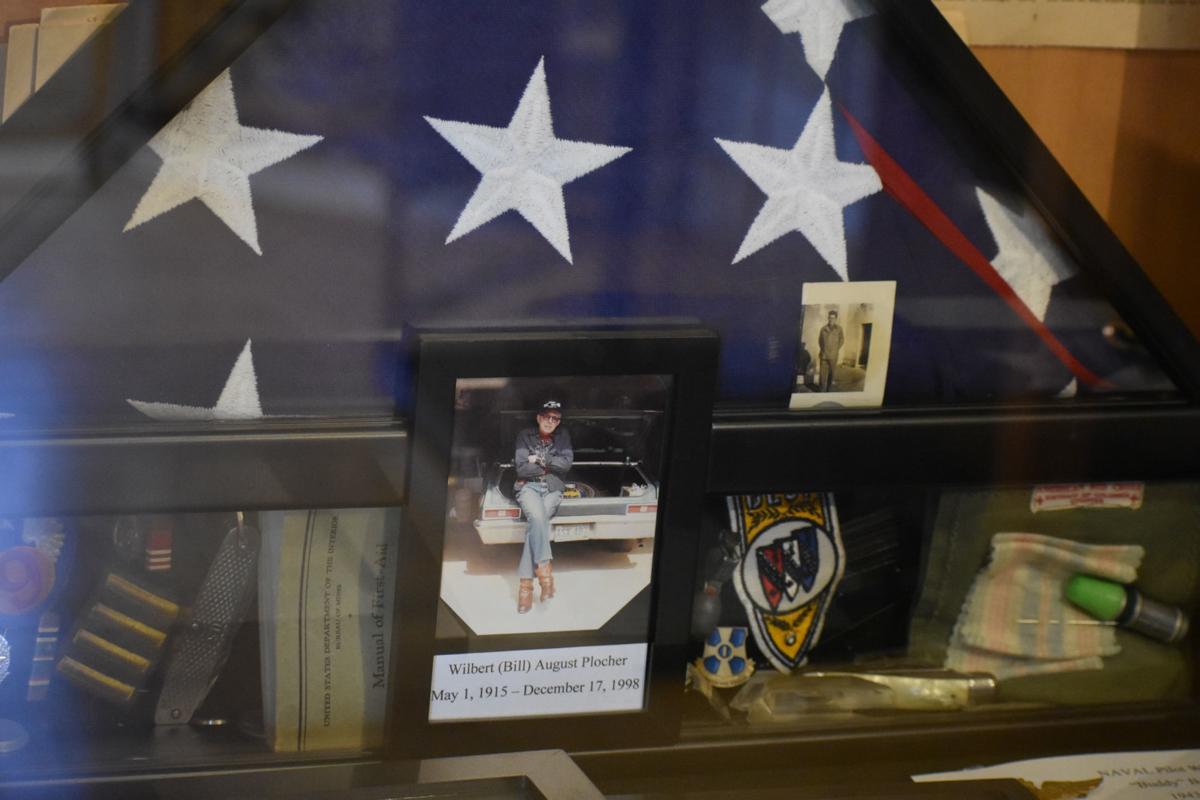 There are tributes to soldiers who served during the world wars. 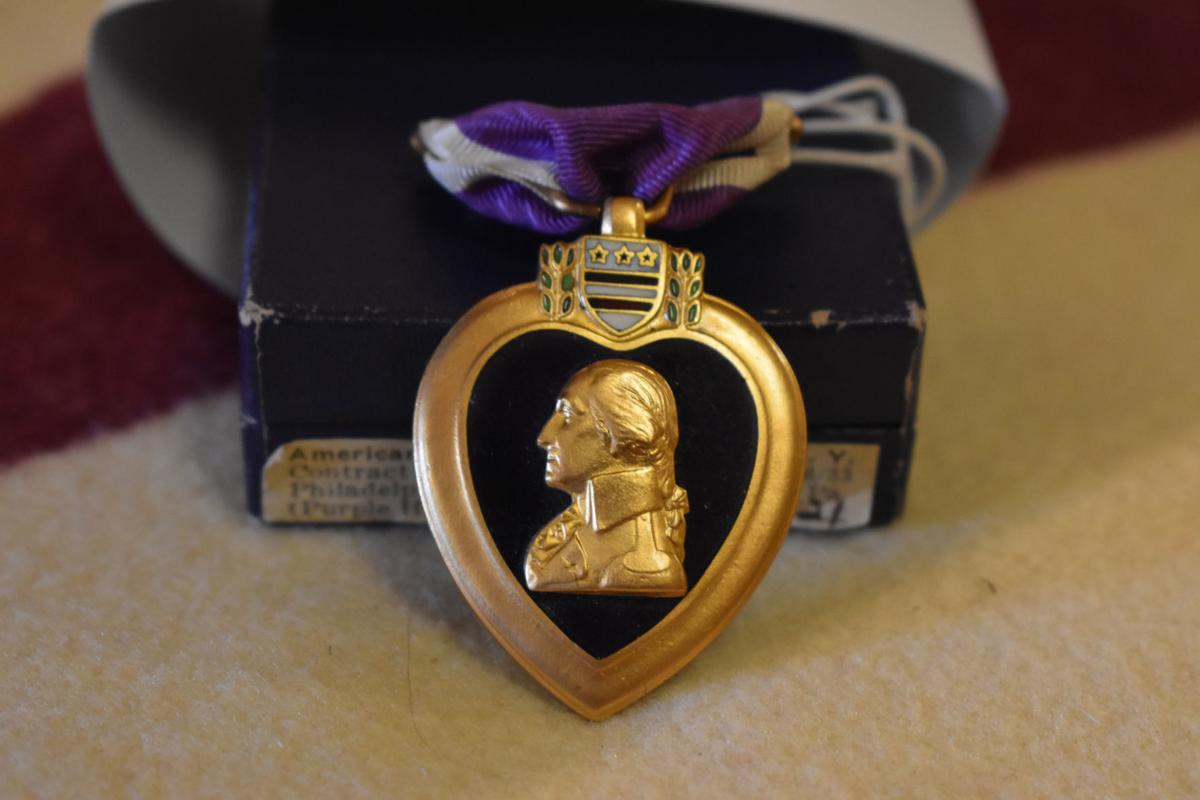 A Purple Heart is on display at the Chaska History Center.

Chaska History Center volunteers are still finding names to add to a list of those who served during WWI and II. At center is Tracy Swanson speaking to Jeanette McGillicuddy, top right.

Volunteers composed a map of where people served during WWI, said head of research Jayne Odden.

An old gas mask from WWI is on display at the Chaska History Center.

Food and sugar were rationed and old metal scraps and cooking oil were collected to produce weapons, during the world wars.

There are tributes to soldiers who served during the world wars.

A Purple Heart is on display at the Chaska History Center.

Chaska was just a small town with a few thousand people during World War I and II, but even tiny towns were doing all they could to help the United States win the fight abroad.

While dozens of Chaska men were deployed overseas to Europe and Asia, food was rationed for those at home, and scrap metals were collected to create military supplies, according to Jayne Odden, head of research for the Chaska History Center’s latest exhibit.

“People don’t realize what people at home had to give up — eggs, sugar and even gas was rationed,” Odden said.

It was all hands on deck and an important time that should not be forgotten in Chaska’s history, so Odden and a group of volunteers gathered all they could about local involvement for the Chaska Historical Society’s latest exhibit: “Chaska During WWI and WWII: The Fight Overseas and the Support at Home.”

It will be open during River City Days, 10 a.m. to 6 p.m. Friday and Saturday, at the Chaska History Center, 112 West Fourth Street. The exhibit features a number of artifacts, including nurse and soldier uniforms used during World War I and II; letters written to families; a Purple Heart medal; and even an old gas mask.

The exhibit took months to put together and features items collected from Chaska families, and on loan from the Carver County Historical Society in Waconia and the Minnesota Military Museum at Camp Ripley.

“People were really willing to share their information for it … it was a community effort,” Odden said. “It was a lot of good connections.”

Though it took months to put the exhibit together, the work isn’t over.

When the Chaska History Center is open, volunteers are still combing through the list on file for those who served during World War I and II. Verifying they did indeed serve and that the spelling is correct.

It’s not complete yet, as people come in and give the names of their relatives who served.

Much of that list was compiled by volunteer Jeanette McGillicuddy, who was tasked with flipping through and reading every page of the Chaska Herald newspaper from 1914-1918 and 1939-1945, looking for reports of those who enlisted or died in battle.

It took her from January to May to read through all the issues.

There were no official lists kept of people who volunteered for the wars by the U.S. government at the time, and with only a physical version of some of the newspaper’s oldest editions, McGillicuddy had to gather the information by hand, Odden said.

“The amount of information was amazing,” McGillicuddy said, noting that there would be a solid page dedicated to letters to the editor about World War II, each week.

Now, the list of Chaska men who served during WWI and II spans dozens of names at the entryway of the Chaska History Center, but it gets updated every so often when someone walks through their doors and finds their relative’s name missing from the list.

“We wanted to show who served during WWI and II,” Odden said. “After we got it together, we found out we were missing names.”

“We’re hoping to get the names in the next month, not just for WWII, but for all the wars,” she added. Also on display is a description of the duties women who volunteered during the war effort, performed abroad along with a list of Chaska women who had served.

“I was surprised with how many women served from Chaska,” said Odden. “I’m impressed with the number of people who served, overall.”

The exhibit is not only interesting to visit and read up on, she added.

“It’s going to be incredible for research in the future,” Odden said.

Time: 10 a.m.-6 p.m. Friday, July 26 and Saturday, July 27. The exhibit will remain up through the year during the Historical Society's regular hours.

During wartime, sugar and eggs were rationed, so many started making up their own recipes to make sweet goods.

Orange Drop Cookies were made during the war, according to volunteer Chaska History Center volunteer Jeanette McGillicuddy.

Here's the recipe for the eggless and sugarless cookies, provided by Mcgillicuddy, from lovefoodies.com. It takes approximately 15 minutes to prepare, 10 minutes to cook and serves four people.

Juice from half an orange