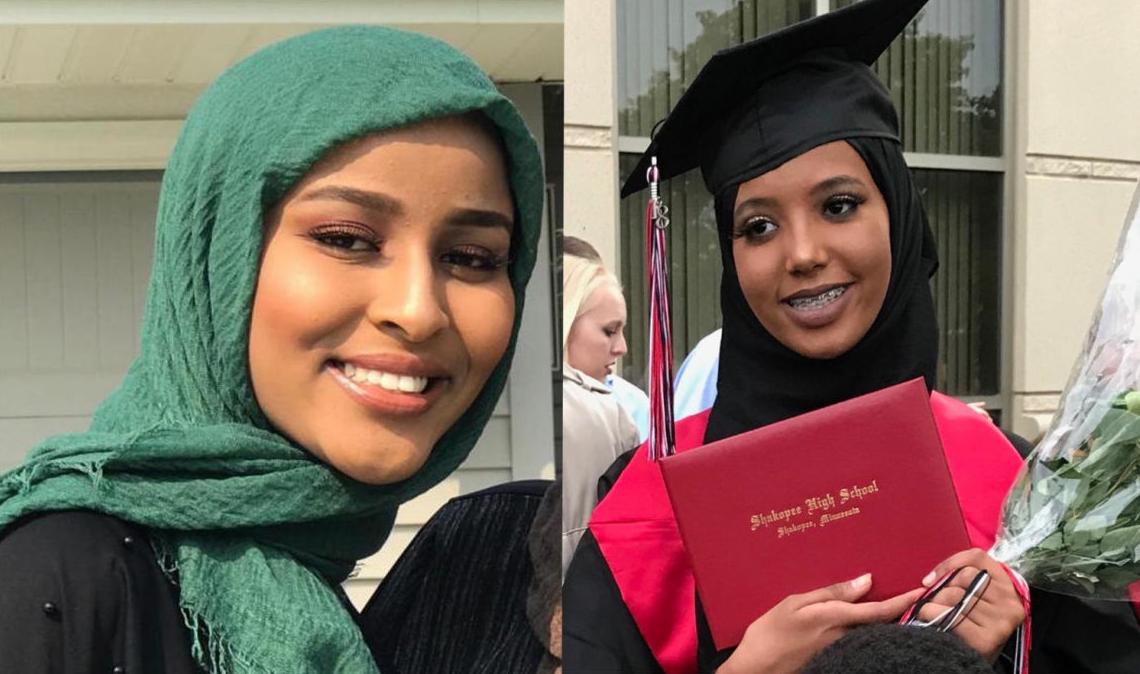 Bushra Abdi, left, and Zeynab Abdalla made a desperate 911 call for help from the same area of Chaska where their bodies were found in a pond a day-and-a-half later. 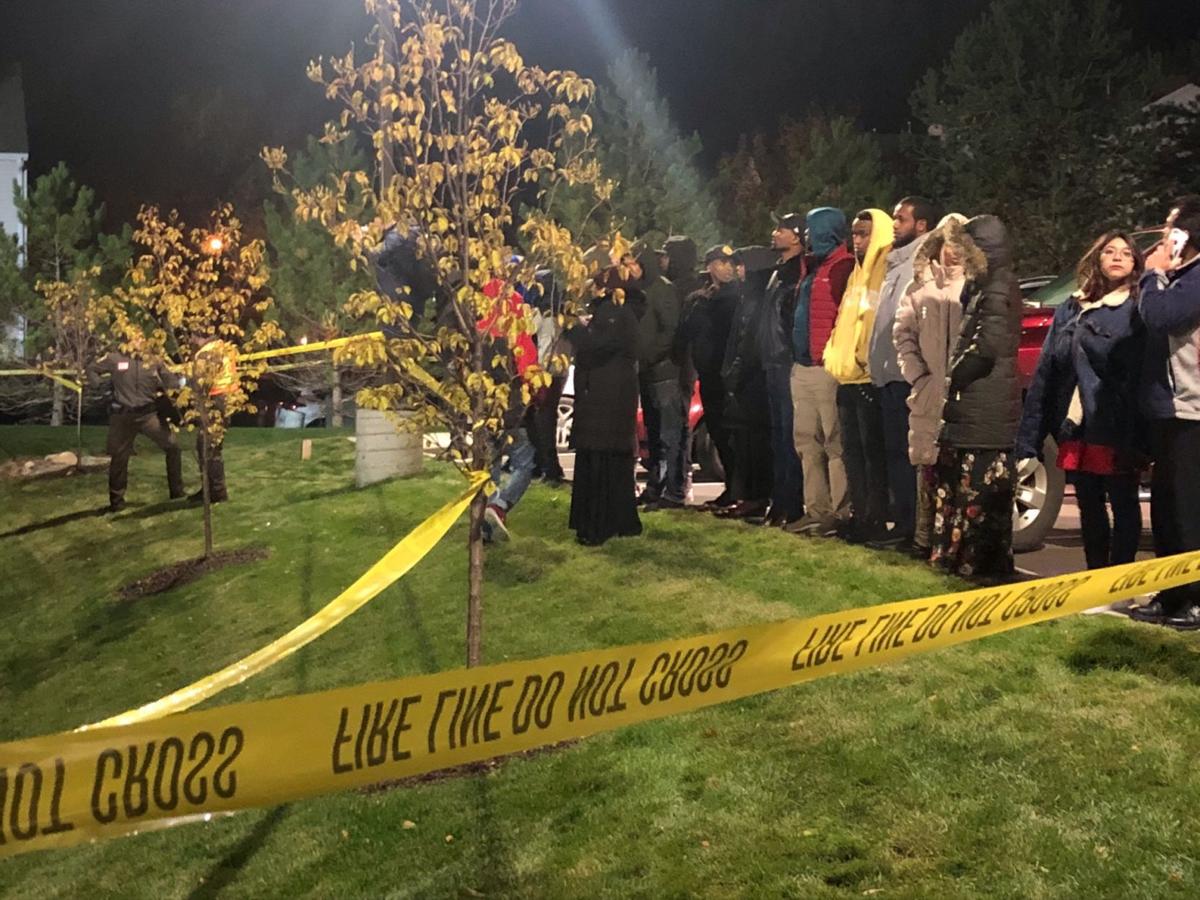 Bushra Abdi, left, and Zeynab Abdalla made a desperate 911 call for help from the same area of Chaska where their bodies were found in a pond a day-and-a-half later.

The Carver County Sheriff's Office dispatch received a desperate call for help from the two 19-year-old Shakopee women who drowned in Chaska on Oct. 13.

Authorities knew the approximate location of the call immediately, according to 911 audio and transcripts turned over to the Chaska Herald Friday pursuant to an open records request, nearly three weeks after the incident, which remains under investigation.

According to the transcript and audio, Chaska police were dispatched to White Oak Drive and Highway 41 within three minutes of the 911 call, but didn't find anything. A day-and-a-half later, the bodies of Bushra Abdi and Zeynab (Hapsa) Abdalla were found with their car in a water detention pond at the southwest corner of Highway 41 and White Oak Drive.

Transcripts of police dispatches indicate authorities thought someone was yelling "get off!" on the 911 call. But subsequent audio analysis of the muddled, screaming call determined she was saying they were in water and drowning.

The Carver County Sheriff’s dispatcher received the 911 call at 3:07 a.m. on Oct. 13, and although the call is difficult to decipher, it’s clear someone is screaming.

According to a transcript completed after audio analysis in the weeks following the drownings, the caller was screaming “Help we are drowning!” After several pleas for help in less than 55 seconds, the call went silent and the dispatcher was unable to get an answer after calling the number back repeatedly.

Later, it's not clear what time because the time is not specified on the transcript, an officer told the dispatcher that “407 (a squad) and I are out at Walnut Place. If you haven’t already you can clear everyone from the, ah, call for now.” According to the police blotter, officers responded to a Walnut Place address at 4:02 p.m.

At 3:10 a.m., the dispatcher called the Holiday gas station in that area to see if they had any idea what was going on. A worker said he didn’t hear or see anything and went outside to check, and then returned to say no and that an officer outside “just waved his light around to look and then he didn’t see anything either,” according to the transcript.

At 3:13 a.m., the dispatcher called AT&T to try to figure out where the cell phone was located and who it belonged to. He was told by AT&T the phone belonged to Zeynab Abdalla of Shakopee.

They tried to use AT&T pings to zero in on the cell phone location, but a Carver County dispatcher told an officer the pings were “not the greatest,” and “they’re putting her off of 35W and Hazelwood Avenue.”

“They’re way out there,” he said of the pings. “They’re not… they’re not great but they’ll be sending them for the next four hours.”

At 3:46 a.m., a Carver County dispatcher called Scott County dispatch and said they got a 911 call “where we heard a woman screaming ‘Get off, get off’ and screaming for help and then she hung up.”

Later the Carver County dispatcher says “or maybe it was two guys fighting and she was screaming ‘Get off, get off help’ because you know, (redacted) is getting beat up. I, you know, we don’t know.”

And in another dispatch call at 3:49 a.m., a Carver dispatcher tells an officer “at the end you can hear like some… it’s just like tussling almost like a phone is being tossed.”

Dispatch also attempted to track down a Shakopee resident with another phone number connected to Abdalla's phone, the records show.

Saturday passed and by Sunday, Oct. 14, the community had organized a search of Chaska. Eventually, hundreds of people, many of them Somali-American, ended up at Highway 41 and White Oak Drive, where the car was discovered submerged and the women were found that evening. Shakopee Police Chief Jeff Tate has previously said an officer checked the area again and found the car.

Ibrahim Mohamed is a cultural liaison for Shakopee Public Schools and worked with both women in school from the time they were young girls, but they were also his nieces. Abdi and Abdalla were both kind, welcoming and helpful, he said, especially with new students.

"Both of them like to welcome and feel comfortable with the new students," Mohamed said. "They were very caring."

The two women were like sisters, he said, and they loved their families deeply. They enjoyed shopping together, which was a fitting hobby for Abdi and Abdalla, a pair that someday hoped to be a fashion designer and a cosmetologist, respectively.

"When she started work, she used to help the other kids financially," Mohamed said. "She was very generous."

When the family first learned the two women were missing, word spread quickly among the Somali-American community. Mohamed said the whole community was "in shock" and didn't know how to react.

"We know what to do when someone gets shot," he said. "But when we had them missing, the whole community was shocked. There was a lot of speculation, kidnapped, or another thing was they called 911 and then it didn't go through and they were crying for help. It was very painful. I have seen a lot of things, but this was the worst. Worst."

In Somali culture, the funeral is three days and the whole community comes together to comfort the family and offer support. So many people came to the funeral ceremony, they were overflowing out into hallways and Mohamed couldn't even get inside the main room.

"I have never seen the turnout like that," he said. "They closed the road. It was intense. The crowds — thousands. A steady crowd like when the Vikings are playing."

Prior to the 911 call transcript being released Friday, Mohamed said he still had questions about the night the women died and why police weren't able to locate them faster.

"I have questions about the death. I don't know why it took so long (to find them)," he said. "I want to wait, since it's an investigation, but I have questions."

Chaska authorities have released little information about the incident, saying, “This case remains an open and active investigation. Additional information will be made available, at the appropriate time(s), going forward, as allowed by Minnesota State Statutes,” in a press release by Chaska Police Chief Scott Knight the day after the bodies were found.