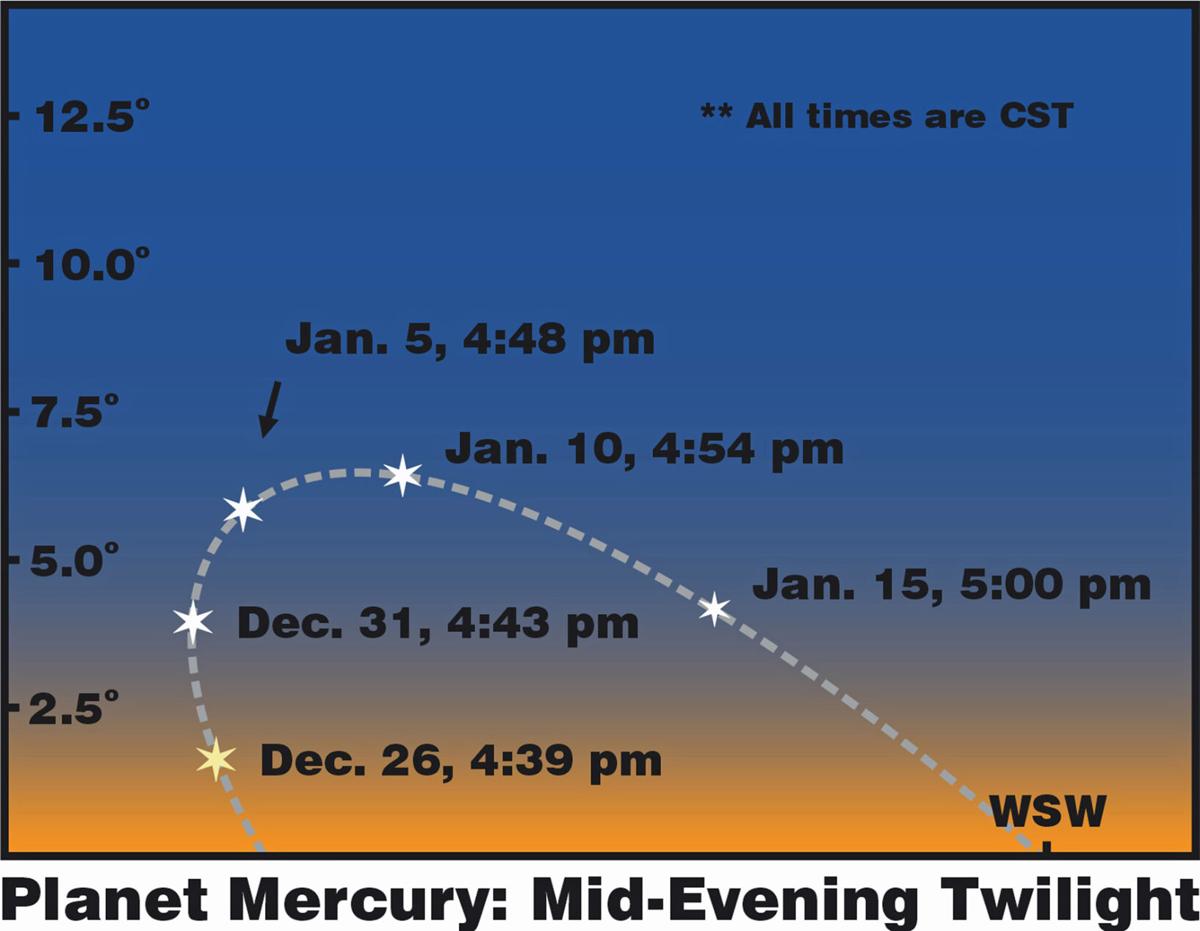 Planet Mercury makes an appearance in the evening sky this month. Look for it 45 minutes after sunset during the first two weeks of January. The planet can be found five to seven degrees above the horizon halfway between southwest and west-southwest then. Five degrees is half the width of a clenched fist held at arm’s length. 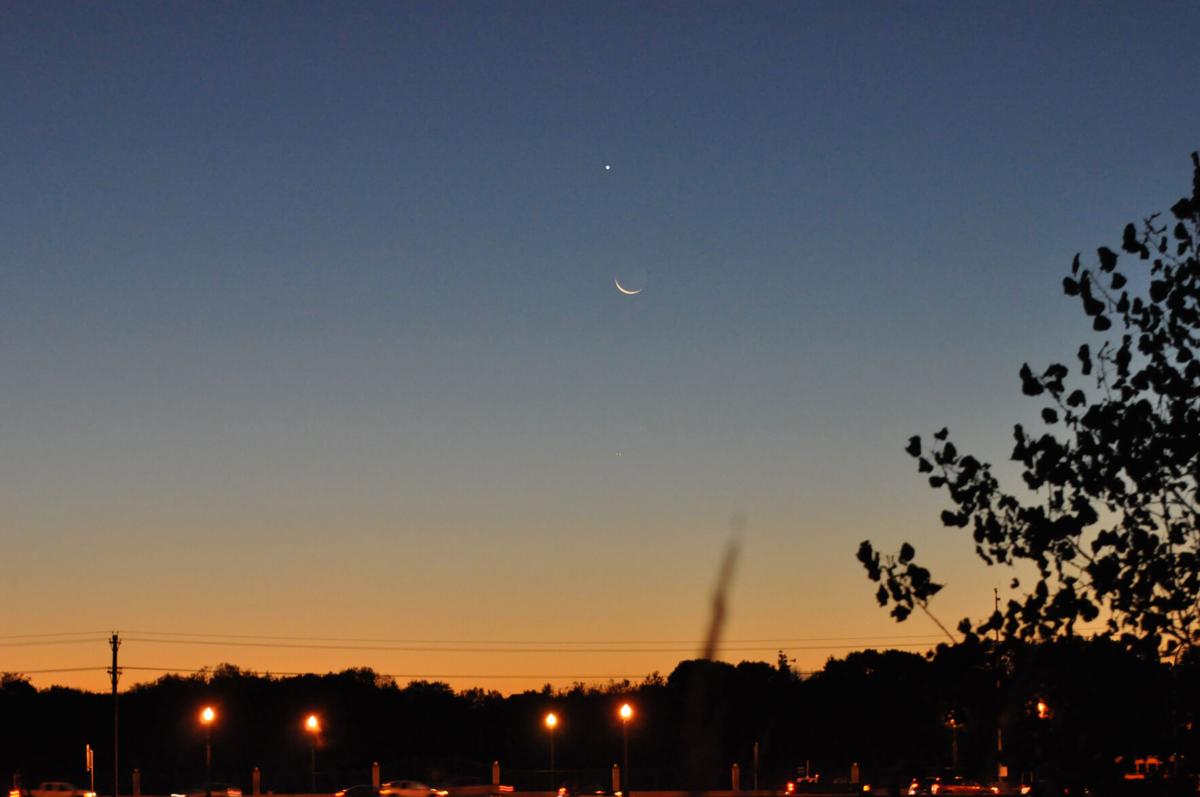 Mercury is easy to locate if observed at times when the angle between it and the Sun is greatest. This image was taken on such an occasion during mid-morning twilight Sept. 29, 2016. Coincidentally, the waning crescent moon appears below Mercury.

Planet Mercury makes an appearance in the evening sky this month. Look for it 45 minutes after sunset during the first two weeks of January. The planet can be found five to seven degrees above the horizon halfway between southwest and west-southwest then. Five degrees is half the width of a clenched fist held at arm’s length.

Mercury is easy to locate if observed at times when the angle between it and the Sun is greatest. This image was taken on such an occasion during mid-morning twilight Sept. 29, 2016. Coincidentally, the waning crescent moon appears below Mercury.

Mention the word “mercury” and one of two things comes to mind: the silvery metal that is liquid at normal temperatures, or the planet closest to the Sun in our solar system. Both versions suggest things whose behavior is lively and swift. We will be concerned with the planet Mercury.

The earliest record of planet Mercury dates from 14th century B.C.E. An Assyrian stargazer referred to it as the “jumping planet,” likely because of rapid changes in the planet’s position. Later skywatchers, similarly inspired by the planet’s quicksilver behavior, associated it with “messenger” deities. The Roman name, Mercury, was the one that stuck.

Most of the planets in the solar system travel in orbits that are nearly circular and also lie in the same plane. (The planets behave like marbles orbiting a central ball on the surface of an enormous tabletop.) Mercury’s orbit deviates considerably from this behavior, however. Its path around the Sun is tilted seven degrees with respect to the orbital plane of the other planets and the shape of Mercury’s orbit is distinctly oval.

Mercury is a small planet, being just over one-third the diameter of Earth. It zips around the Sun in 88 days (a Mercury year is one-fourth as long as an earthly one). So, Mercury moves quickly in the sky. Being close to the Sun, Mercury never appears very far from the Sun (the maximum angular distance is a measly 28 degrees — less than one-third the number of degrees in a right angle). As a result, Mercury can never be seen more than two hours after sunset or before sunrise.

Given these facts, it might seem that Mercury is a difficult planet to observe, and to a degree, this is true. In any given year, there are just six or seven, short viewing opportunities. They occur when the angle between Mercury and the Sun is greatest. Astronomers refer to the time when the Mercury-Sun angle is greatest, as an “elongation.” Elongations alternate between morning and evening, providing two- or three-week long windows to spot Mercury on each such occasion.

The first opportunity to see the innermost planet this year will take place shortly after sunset during the first two weeks in January (see the accompanying sky chart). The illustration reveals that Mercury will appear about five to seven degrees above the horizon 45 minutes after sunset. During this elongation, Mercury will be located about halfway between due southwest and due west-southwest (the location of due southwest is not shown on the sky chart). Mercury will not look like the symbol chosen to represent the planet in the illustration. Mercury will look like a star.

Eyes alone are the only tools needed to see Mercury. It will be quite bright. Because the planet will be quite close to the horizon, it is essential that an observing site unobstructed by foreground objects such as trees, buildings, hills, etc. be used. Inclement weather may also hinder seeing, although the sky chart provides a range of dates and times when viewing will be possible.

A great many things about Mercury make it a challenge to view, but having a few insights about its nature and behavior can guarantee success when looking for this elusive planet. Now, go outside and look for Mercury, but be quick about it!

Rod Nerdahl’s interest in astronomy began in the early 1960s, during the formative years of space exploration. In 1974 he earned a bachelor’s degree in earth science education from the University of Minnesota. The following year he joined the staff of the Minneapolis Planetarium, serving as one of its astronomy educators for 27 years. He also created all of the astronomical illustrations, articles and data published annually in the Minnesota Weatherguide Calendars for 28 years. He and his wife Peggy live in Chaska.