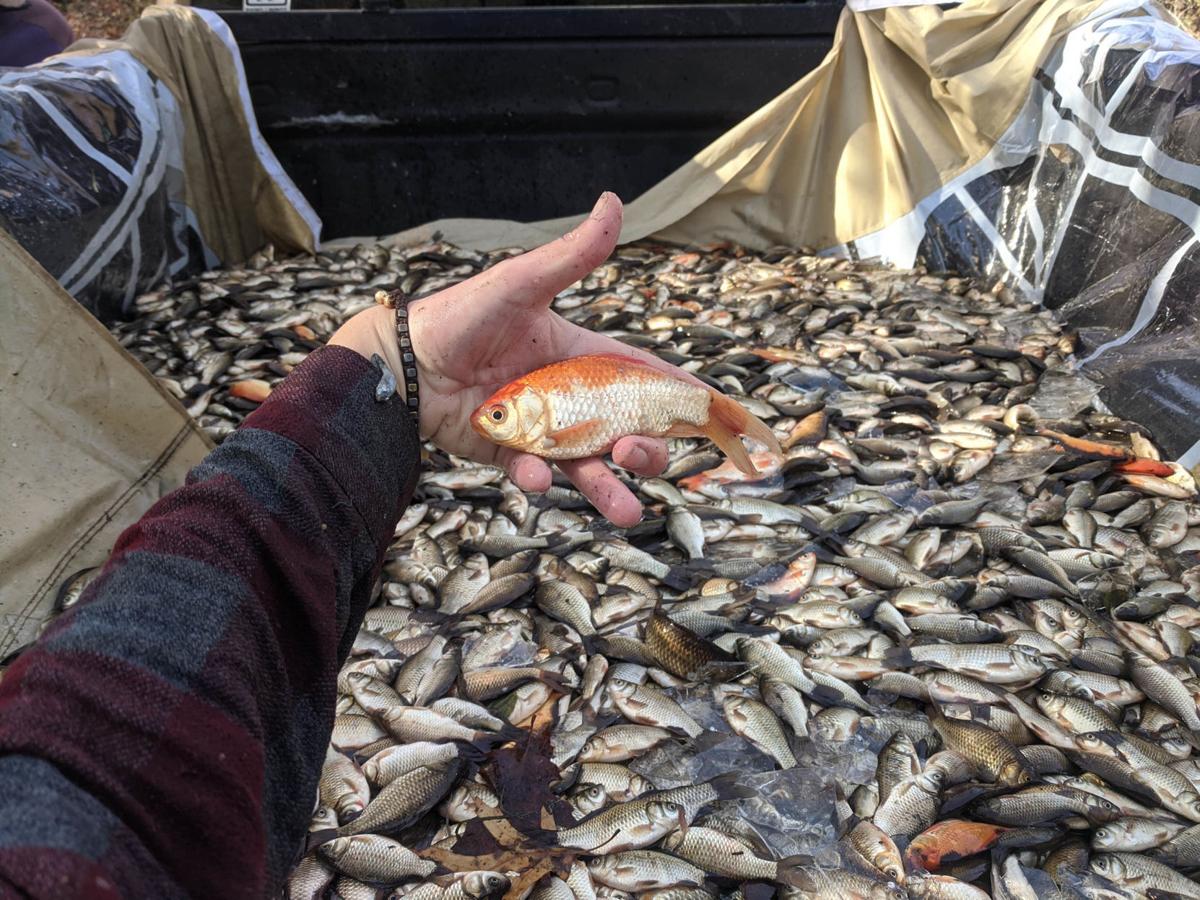 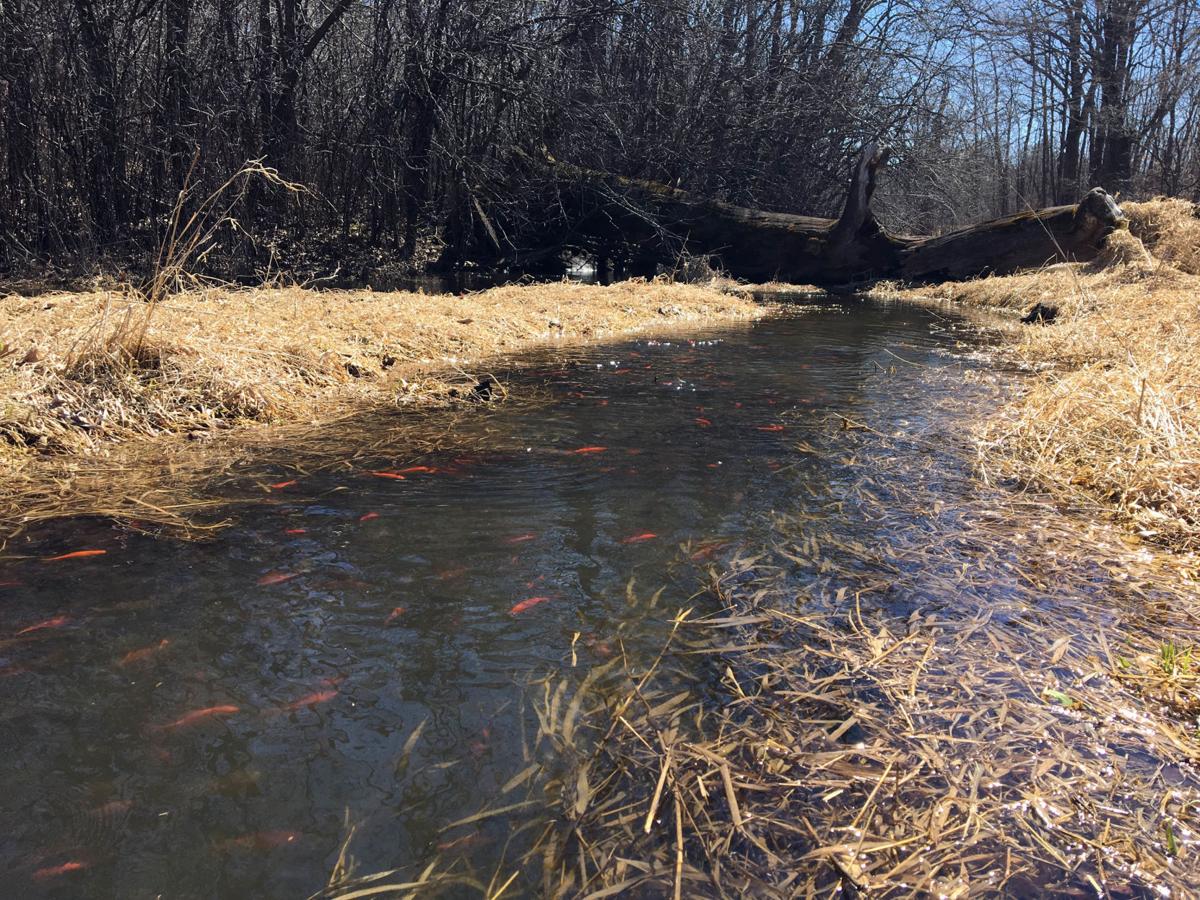 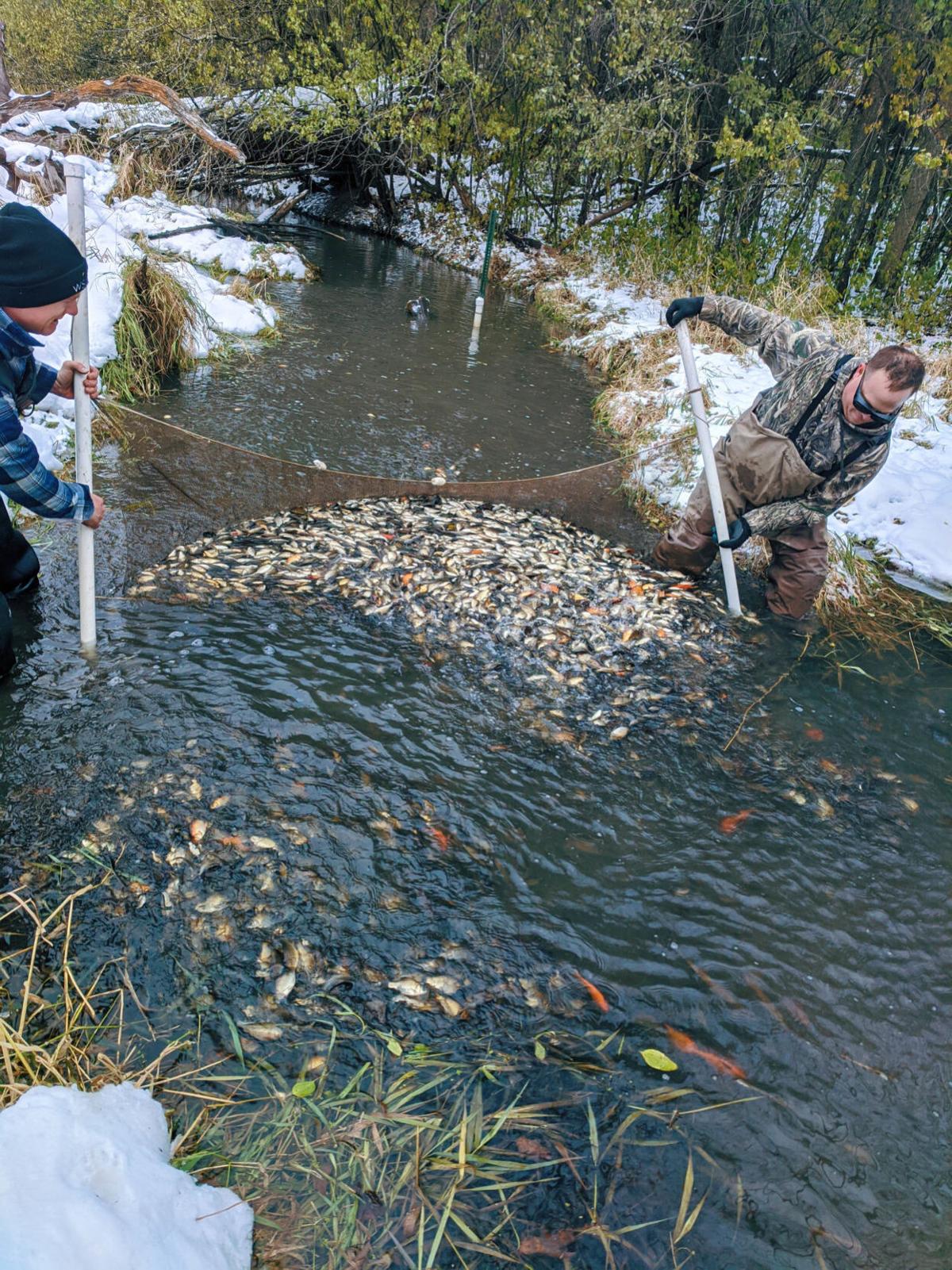 Despite their popularity as childhood pets, there’s still a lot we don’t know about them.

That’s why the Carver County Water Management Organization is teaming up with WSB & Associates, Inc. for a three-year study to track the invasive species movement, breeding patterns and population to get a better handle on their impact. The group now has a Board of Water and Soil Resources grant for $80,000 to manage population in Big Woods and Hazeltine lakes in north Chaska.

Two years ago, Carver County Water Management Organization staff found thousands of goldfish in Chaska’s Big Woods Lake inlet. Numbers now hover between 100,000 and a million in both lakes — as a best guess.

Answering that will take at least another year of tracking, removals and data collection.

Goldfish, an aquarium pet not native to Minnesota, are much like common carp in many ways.

Goldfish, likely introduced to the water after pet owners illegally dumped them, breed prolifically and can live to be 25 years old even in low-oxygen water.

Not only that, but they can be damaging.

When they bottom-feed, the movement results in high phosphorus levels, leading to to algae blooms, which lessens oxygen in the water. With too much buildup, the algae can block sunlight from plants below. While eating, goldfish can also uproot native plants, which keep lakes healthy and hold soil in place, Seveland said.

“Then when fish rip them up, it further exacerbates phosphorus,” she said.

Invasive species also create competition for food and shelter among native fish. All of these are reasons why staff are, like the fish, trying to get to the bottom of things.

Similar regional studies have been done on common carp. But goldfish are a different breed and might require different removal tactics.

“Nobody’s really done a good study on goldfish in this area,” Sundby said. “Our understanding is, well, they’re so closely related they share a lot of the same characteristics, but we don’t know 100% for sure that’s the case.”

Without fully knowing how goldfish breed, travel and affect the lakes, staff can’t be sure if the moves they make are the right ones.

GETTING TO THE BOTTOM OF THINGS

By late summer 2019, each lake in the Grace Chain of Lakes (Big Woods Lake, Lake Grace, Lake Jonathan, McKnight Lake, and Lake Hazeltine) was surveyed for fish. Staff would capture goldfish with nets, identify them, and release them. Goldfish between 3.5 and 10 inches long were found.

In October 2020, thousands of goldfish were removed from the chain — anywhere between 30,000 and 50,000 during their migration throughout the chain of lakes that month.

All that work served as a prep for this grant. Now, five staff members are actively involved with the study.

Sundby said this summer, the crew will take a boat to the two lakes a few times a month, taking samples and tracking goldfish movements with radio locators and antennas. They work similarly to microchips.

When not in the field, researchers will try to determine fish age by looking at their ear bones.

“They kind of grow similar to a tree. They grow rings and they count those on the bone and they get an idea of how old the fish are,” Sundby said.

Then, the team will figure out how many fish need to be removed and composted.

It’s important to do all this research before removal, Sundby said.

“If we just go in and try to scoop out as much as we can, we don’t know how much is left,” he said. There is a “magic number” of goldfish that can remain in order to sustain a natural ecosystem.

This study should help researchers find that number.

What the crew does know is goldfish tend to congregate in certain areas when the water warms up. Hikers will often call the organization when they spot goldfish off Chaska walking paths.

“It’s very easy for us to net them and remove them at that point. After that, they kind of disperse and that’s where we don’t know where they go,” Sundby said. “During the summertime it’s like, where do they go?”

The study was recommended by the Lower Minnesota Collaborative watershed group, which includes the city of Chanhassen, the Carver Soil and Water Conservation District, and the Riley Purgatory Bluff Creek Watershed District.

WHAT CAN I DO?

The biggest request from water management staff is for people not to release their unwanted pets in the lakes.

Best options include donating the goldfish, surrendering them to the Minnesota Aquarium Society, or checking with local veterinarians and pet stores for next steps.

In addition, staff ask people to not move the goldfish. If they’re relocated, they could find a new home in another lake or river.

It’s risky because the chain of lakes flows into the Minnesota River — somewhere fish could potentially already be swimming to.

“Can they migrate? Yes, they can migrate. But can they survive and would it be a suitable habitat?” Seveland said.

Researchers just don’t know — not yet.