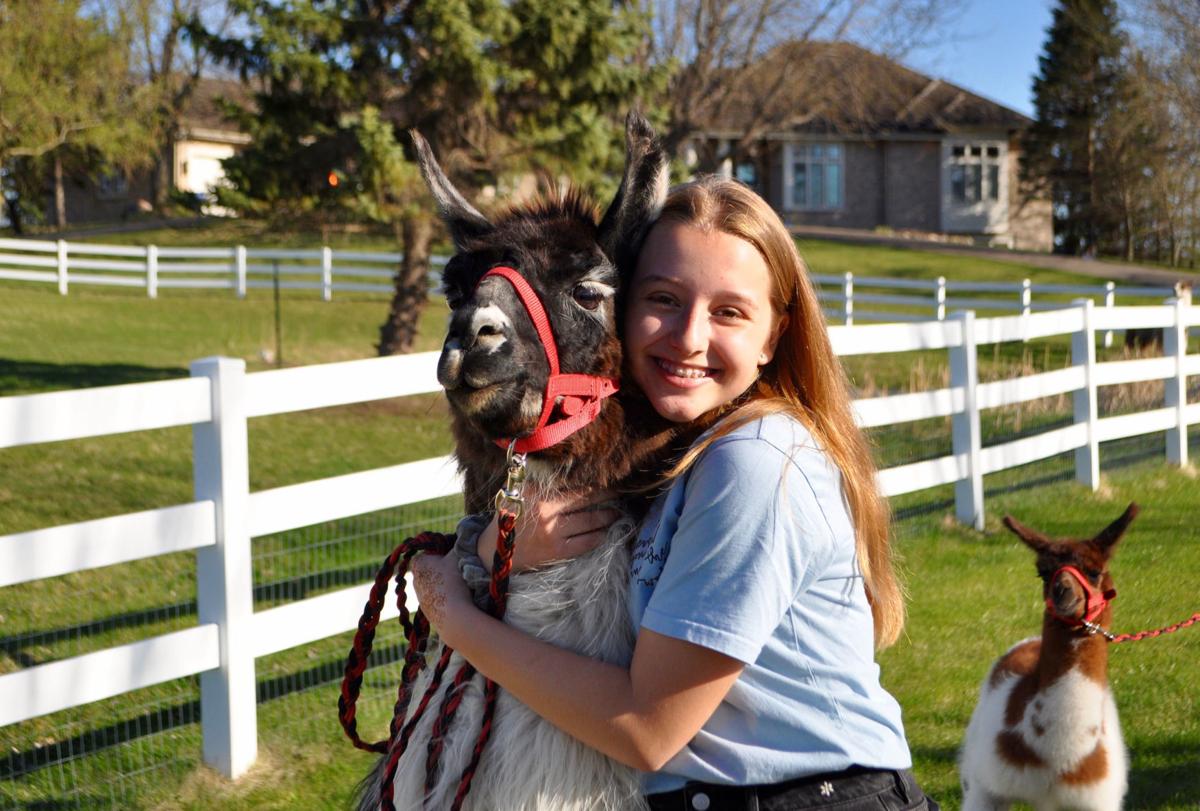 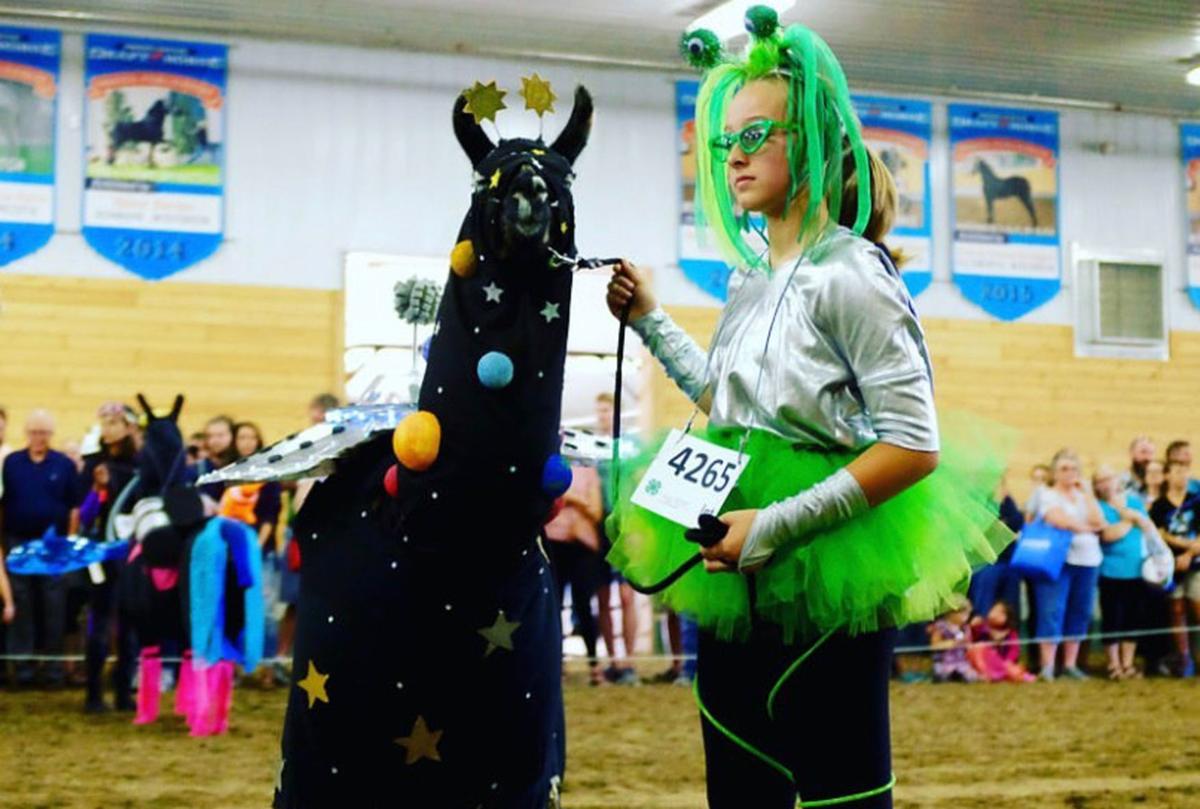 Maren Kerfeld debuts her handmade llama-handler costume: She’s an alien, the llama is a spaceship. She used cardboard and LED lights. Past costumes include Dorothy and the Tin Man from the Wizard of Oz and Paul Bunyan and Babe the Blue Ox. 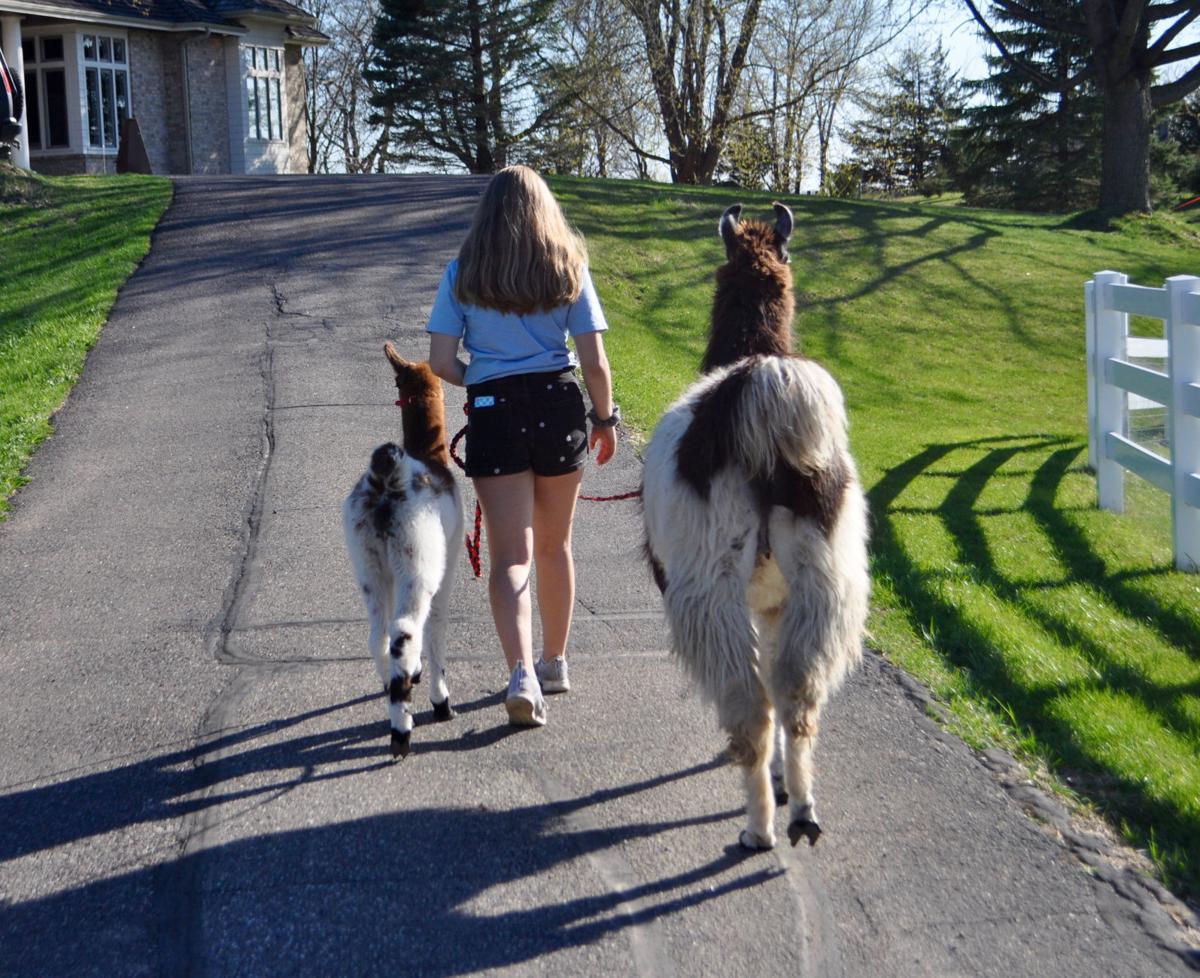 Maren Kerfeld walks llamas Holden, left, and Holly-Cow at the Minnetrista farm where she boards them.

Maren Kerfeld debuts her handmade llama-handler costume: She’s an alien, the llama is a spaceship. She used cardboard and LED lights. Past costumes include Dorothy and the Tin Man from the Wizard of Oz and Paul Bunyan and Babe the Blue Ox.

Maren Kerfeld walks llamas Holden, left, and Holly-Cow at the Minnetrista farm where she boards them.

A year ago, Maren Kerfeld learned to sew.

First came hand sewing, next was the machine. Before she knew it, she’d made not your typical pillow case or stocking cap — but a llama costume.

It’s one of the 13-year-old Chaskan’s favorite 4-H activities, along with llama obstacle courses and showmanship competitions.

This year, all of that’s looking a bit different.

“Our Zoom calls last anywhere from 30 minutes to an hour,” she said. “They just kind of make slideshows and quiz us on our knowledge of llamas.”

Before the COVID-19 pandemic, the llama-focused 4-H students would meet every other Sunday in person at Carlson’s Llovable Llamas in Waconia.

Now, every Sunday, Kerfeld and her friends pop open a laptop or connect on a phone in an effort to keep learning. It’s the new normal.

Vatter helps run those meetings from home. She said it’s the start of 4-H’s decision to hopefully move to online contests, instead of preparing for the Carver County Fair or Minnesota State Fair, which are both canceled.

It begs the question: “If we can't meet in person for fairs what are we going to do?” Vatter said.

4-H, which has participants across the U.S., is based on a premise of learning new skills in, say, agriculture or the arts. State and county fairs can be a pinnacle for members, who start as early as age 5 and finish at 18.

After the Minnesota State Fair announced its cancellation over a month ago, Vatter saw the Carver County Fair follow suit. It’s a big deal for a lot of 4-H children.

“Youth will have their opportunity to showcase their project learning,” said Vatter, who was in 4-H herself and has children involved. “It just so happens that August is when they get to show off a little bit.”

But since 4-H itself can’t host any events until at least Sept. 1, that “showing off” won’t be typical. The county and state fairgrounds simply aren’t an option for in-person judging this summer. Exactly what those competitions will look like is still up in the air.

“Whatever virtual judging we do, there still is a pathway if there’s a state event that will happen. We’ll make sure that there's a way for them to get there. This year is just upside down for everything and in every piece of your life,” Vatter said.

The state came up with some guidelines to do virtual showcases, and Vatter said she has protocol and a “whole long list of things” if the state decides to do an in-person event. It would just need to be at a facility other than the fairgrounds.

'IT'S A LOT DIFFERENT'

Incoming Chaska High School sophomore Riley Jacobsen is good friends with Kerfeld. His first two years in 4-H led him to the county fair with a llama named Jupiter, before buying his own llama, Myya, in October.

Jacobsen participated at the state fair level for two years after doing well at county showmanship events. He describes it as a “showing off” of the animal.

“Showmanship in llamas is more about how the handler shows off the animal and kind of the handler's knowledge and things like that. It's kind of like a llama fashion show almost. You are trying to look your best,” he said.

But without a fair to prepare for, Jacobsen said he and Myya aren’t preparing to the “extreme.” He’ll attend the virtual Sunday meetings, yes, and visit his llama, but the involvement is significantly less.

“It’s a lot different,” he said of the online get-togethers. “We kind of just go over a PowerPoint and do the best we can and whatnot.”

He’ll still get together with the handful of friends who share a boarding farm, going for two- and four-legged walks. But last year around this time, the pace was more intense.

Toward the end of July in 2019, Jacobsen was out nearly every day for hours at a time training and making sure the llamas looked their best.

“We work from, I’d say, the end of March, start of April until August, grooming and working with the animal. This year it's a lot different not having a fair and not having the ultimate goal of getting them ready for,” Jacobsen said. “We’re still doing stuff, of course, but it’s not as extreme.”

He also does photography and veterinary science for 4-H, but hasn’t started preparing for either yet.

A few weeks ago, Kerfeld remembers the day she heard about the county fair’s cancellation. She and some friends met up at a farm.

“We all just kind of were standing around, seeing if we could get an update,” she remembered.

At the time, she’d added a baby llama to her care in addition to Holly-Cow, her spotted llama. She was excited to show baby Holden off at the fair, to have everyone see him.

“They released it the next day,” Kerfeld said of the county fair’s decision to cancel. “It was a big bummer for all of us.”

She still goes out a few times a week to the llama boarding house. Holly-Cow gets brushed and guided through a practice obstacle course. They go for walks. But it feels off.

For a friend of hers, it’s the first time she’s eligible to compete at the state fair. She also knows people who are finishing up their last year in 4-H.

“They don’t get that experience either,” she said.

That lost experience could be extra detrimental to some people.

“The prob with the virtual event that you’re (likely) going to have is camera quality,” Jacobsen said. “You have a lot of people who don’t have the greatest WiFi or don’t have WiFi, and uploading it all into some sort of database where they can judge them? If it’s poor camera quality then how are they going to be able to see it well? It unfortunately is like throwing us all into a hat and just kind of picking one.”

For people who show cattle, sheep, goats or poultry, it’s a whole other story. Jacobsen said sometimes their livelihoods can depend on those fairs for income.

Still, regardless of 4-H category, everyone needs to adjust to the unknown this year.

“It’s just so different when everyone is doing something different and we’re not all together,” Jacobsen said.

Vatter said other 4-H categories like food reviews and performing arts competitions are using a virtual platform called Flipgrid. But the game changes with animals.

“Llama is pretty unique in that one of their main categories for competition or for showcasing is around obstacles,” Vatter said. “Can you see that the llama is listening and paying attention and they’re able to work with that animal and get through that little obstacle course? That is hard to show virtually.”

With physical obstacles come, well, financial obstacles too. County 4-H groups own the equipment, but since they can’t have a singular event, that might leave some families with no tools.

That aside, the emotional aspect of it all is hitting a lot of 4-H members no matter the county or access to equipment.

“It’s sad for them too, but I think everyone knows, you know,” Vatter said.

“School is different. Church is different. Going to the grocery store is different. So 4-H is going to be a little different, too," she said. "We’re going to do what we can to make it memorable and to support all our members and have a great 4-H experience this year.”