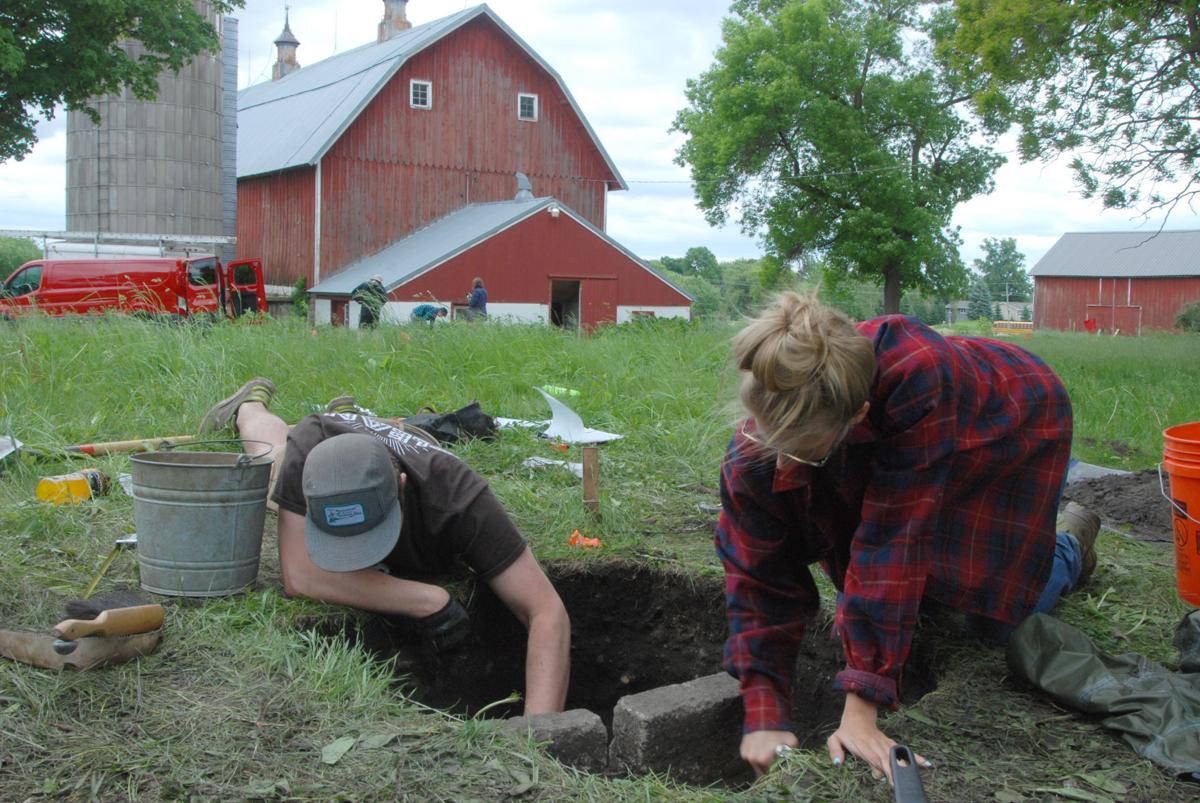 Earlier this summer, Nick Stilson and Mary Spencer investigate a foundation of a long-gone building at the historic Andrew Peterson Farmstead near Waconia. 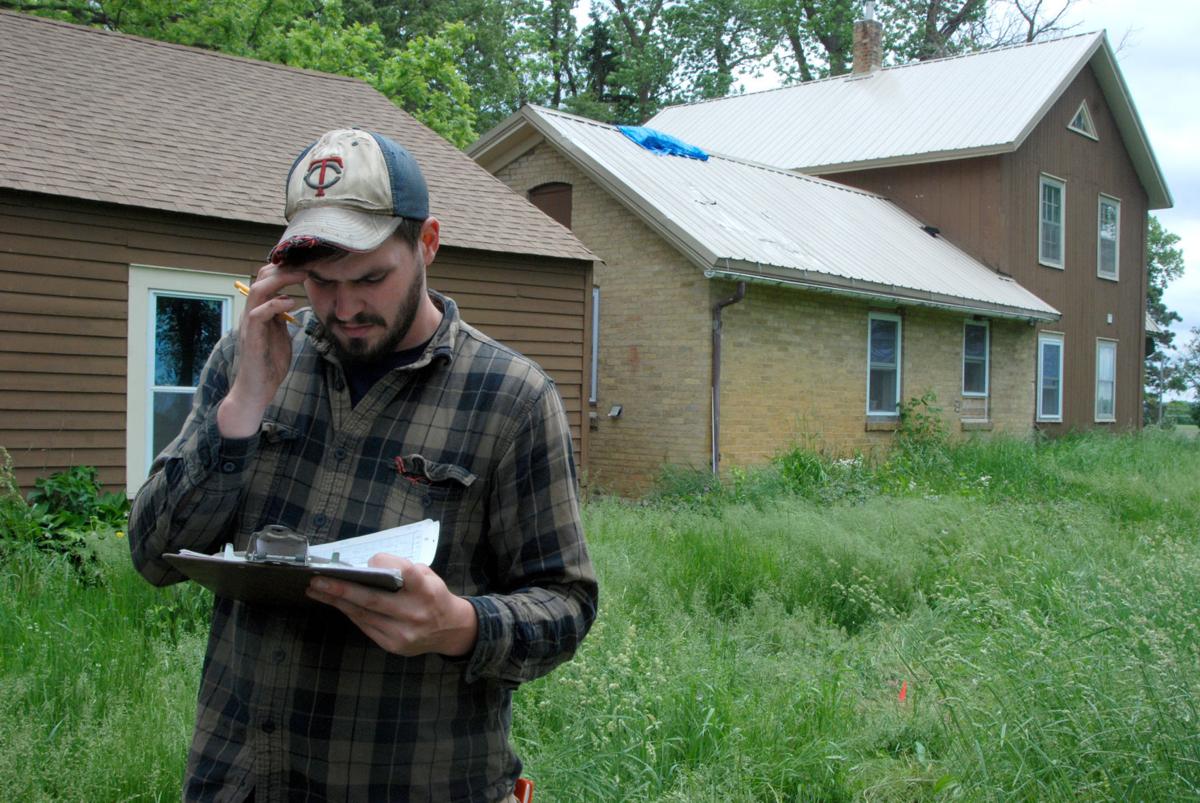 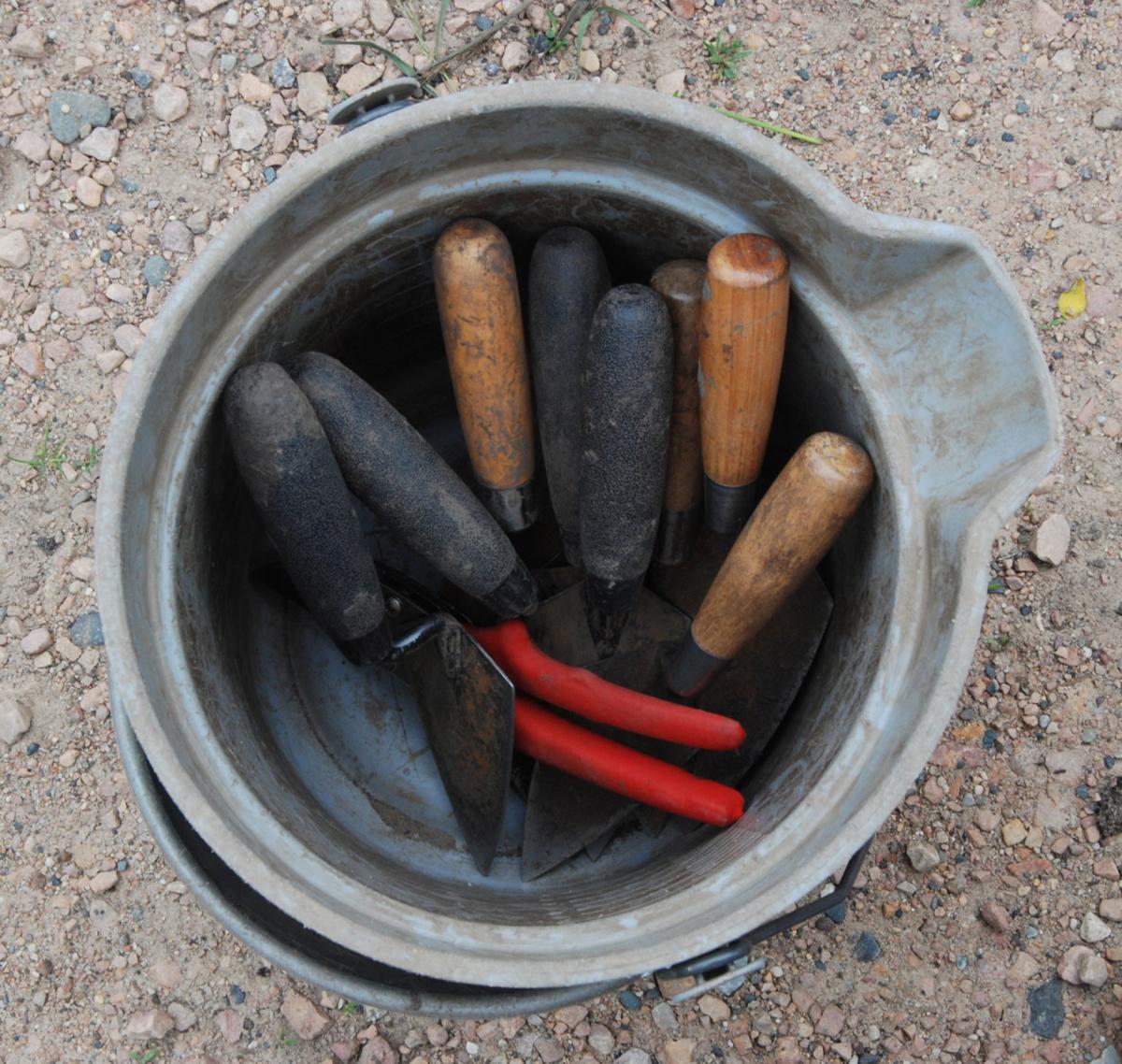 Archaeology tools – a bucket of trowels. 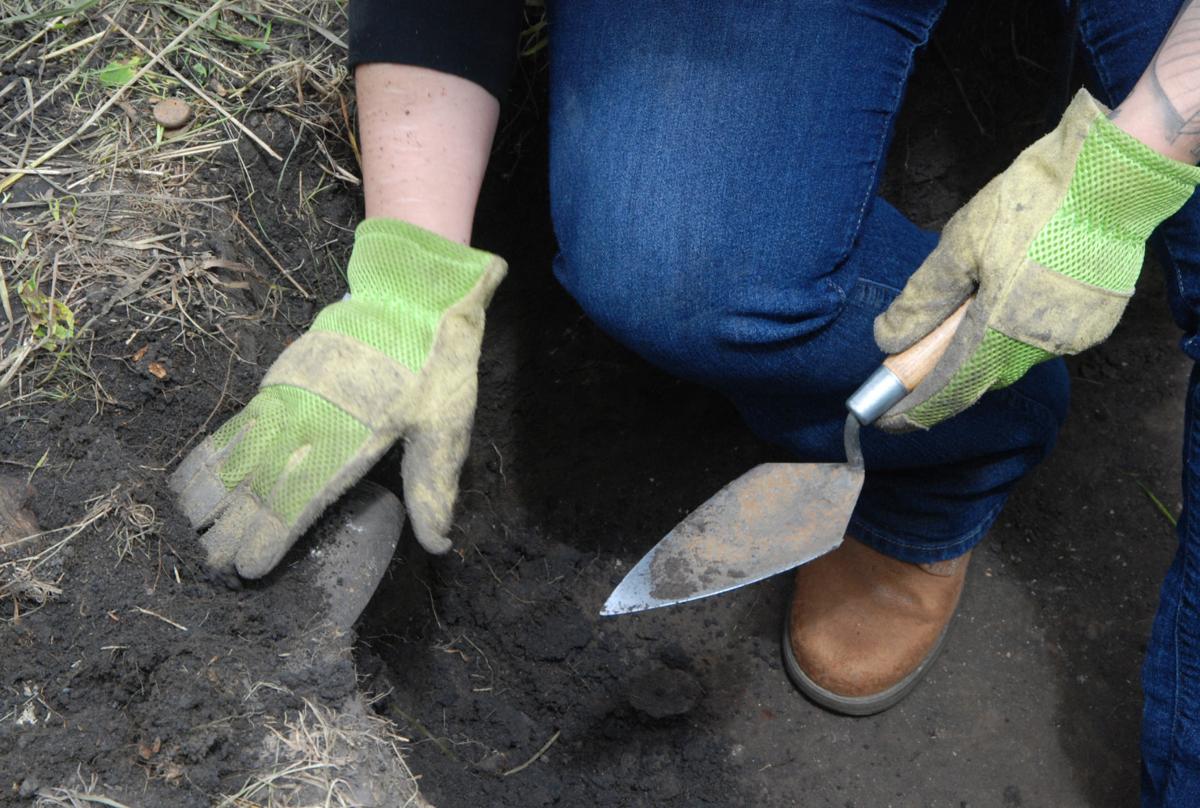 Brittney Shilson uncovers an artifact at the Andrew Peterson farm. 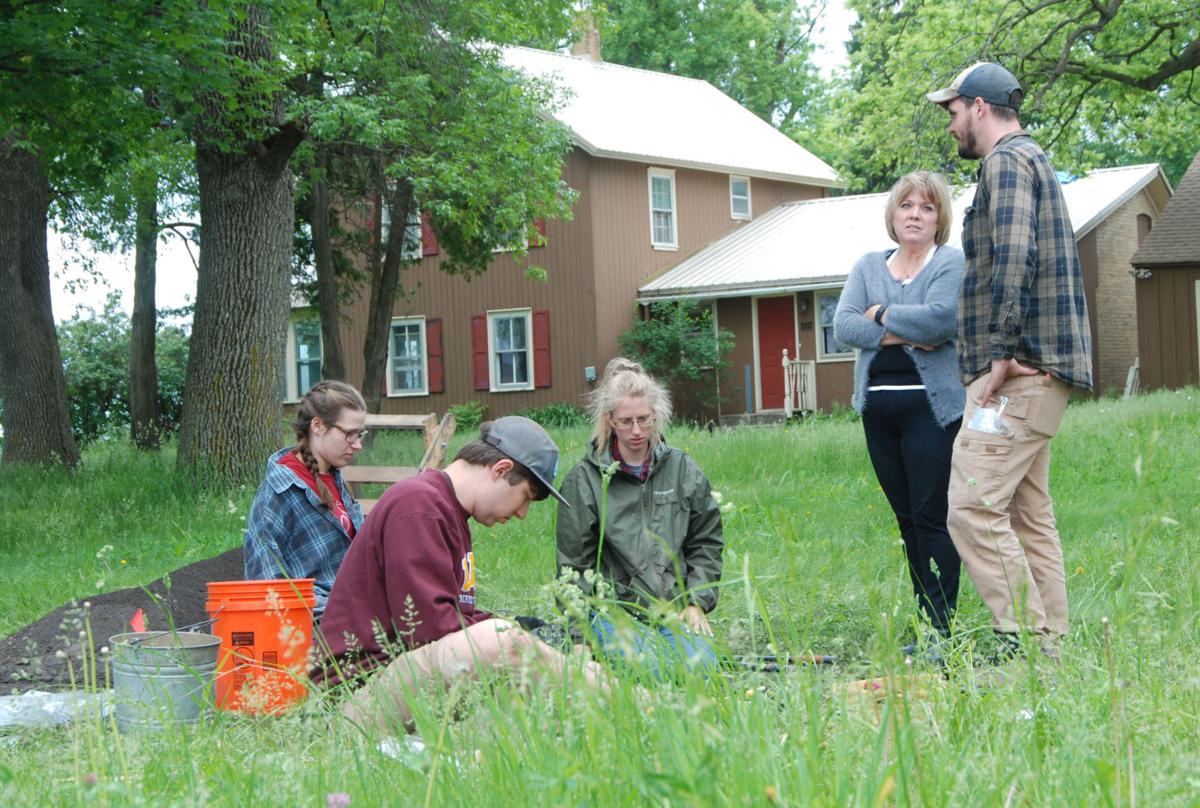 Earlier this summer, Nick Stilson and Mary Spencer investigate a foundation of a long-gone building at the historic Andrew Peterson Farmstead near Waconia.

Archaeology tools – a bucket of trowels.

Brittney Shilson uncovers an artifact at the Andrew Peterson farm.

Peterson penned daily journals of his farm life. Historians have written about him. A famed Swedish novelist used his life story as fodder for a series of books.

University of Minnesota students recently conducted archaeological digs to learn more about Peterson and the farm he homesteaded near Waconia in 1855.

“With historic resources such as the Peterson farm, archaeology gives us a perspective of the aspects of life and culture that were not necessarily recorded, giving us a more complete picture of a time period or event,” said archaeologist Joe Pnewski, who is overseeing the work.

Pnewski, enrolled in the Cultural Heritage Management program at the University of Minnesota, is tackling the project as his master’s thesis. He oversaw the team of eight undergraduate students and a few volunteers, who conducted excavations on the farm from May 23-June 1.

“I am interested in archaeology because it offers a unique perspective and lens of the past and human culture,” Pnewski said.

The Carver County Historical Society recently acquired the 12-acre farmsite, which includes several of the original 1800s structures hand-built by Peterson. The society is now involved in various efforts to preserve the farmstead.

Archaeology adds a whole new dimension to the research. “During the Peterson farm’s 150-year existence, the landscape has continuously changed and fluctuated to better suit the use and purpose of the farm,” Pnewski notes. Buildings have been modified, moved or torn down. Meanwhile, farming technology has changed.

“The earliest elements represent the era (of) pioneering and settlement in mid-19th century Minnesota and the beginnings of agriculture and horticulture in the region, while later elements show the evolution and innovation of farming and farmsteads in Minnesota during the turn of the 20th century and forward,” Pnewski said.

There’s also a more practical aspect to the project. “This is something that’s going to save us tens of thousands of dollars,” said Carver County Historical Society Executive Director Wendy Petersen Biorn. The work is part of a the Resilient Communities Project, a partnership between Carver County and the University of Minnesota. “We were really lucky,” she said, of the assistance.

In order to add infrastructure to the property, such as a new septic tank, the Minnesota State Historic Preservation Office required archaeological work to ensure that historical artifacts weren’t destroyed, Petersen Biorn said. “As we begin to develop the property, we just can’t go digging into the ground,” she said.

Before sinking in the first shovel, Pnewski extensively researched the farm at the Minnesota and Carver County historical societies. He pored over the entire Andrew Peterson journal and studied historic photographs and maps. The information gave him clues as to where buildings once stood and how farmers used the site throughout the decades.

The large amount of documents about the Peterson farm doesn’t necessarily make the job easier. It actually contributed to “one of the largest challenges,” Pnewski said. “I am used to having very little information about a site before beginning work, but the high amount of information about the Peterson site could be a little overwhelming, contradictory, and confusing at times.”

Once on the site, the archaeologists used ground-penetrating radar to discover where soil had been disturbed and determine the sites of long-gone structures. Then they dug 70 small shovel test pits throughout the farmstead. Finally, in a “pedestrian survey,” they walked over the site to look for anything on the surface, depressions in the earth or different vegetation.

When completed, the archaeologists excavated four one-meter-square areas on the farmstead.

Among the items found were farm-related artifacts such a hoe head, tool fragments, nails, shingles and window glass, Pnewski said. The archaeologists also discovered household items such as buttons, ceramics, a pair of matching cuff links and a glass bottle. There were also “surface artifacts” recovered, including jars and cans, he said. Petersen Biorn was also happy about the apparent discovery of an old fence line dating to the Peterson era.

Now archaeologists will take the artifacts back to the University of Minnesota for cleaning, analyzing and cataloging, Pnewski said. “This will give me a much better idea of the collection we recovered from the site ... I will also be doing research on different aspects of 19th century farmsteads including maple sugaring practices, material use and reuse, as well as general layout and land use.”

Pnewski said he still needs to analyze the artifacts to put them into context. “But preliminary observation of the artifacts shows interesting use patterns of both self-produced and re-purposed materials as well as purchased or non-local materials and how they appear in the archaeological record of a mid-19th century through 20th century farm,” he said.

A smaller archaeological crew may return later in the summer and fall to investigate certain locations. Among the areas still being researched is a mysterious ruin, located in brush next to the farmstead. It may possibly be a fire pit once used to make maple sugar.

Perhaps the best thing Pnewski discovered was historical enthusiasm. “The amount of interest from both local and regional parties in the site, as well as what archaeological investigations can contribute to the interpretations, have been the most exciting part of the entire project,” he said.

“The enthusiasm of all the students in the field school has also been extremely beneficial to the work environment and amount of excavations we were able to complete at the site.”

Archaeology at the Andrew Peterson farm

Student archaeologists from the University of Minnesota search the farm of famed pioneer Andrew Peterson farm for artifacts.

Who was Andrew Peterson?

Want to learn more about archaeology in Carver County? Visit www.chaskaherald.com to learn about a 7,000-year-old campsite in Chanhassen -- “Archaeological site continues to reveal its secrets.”