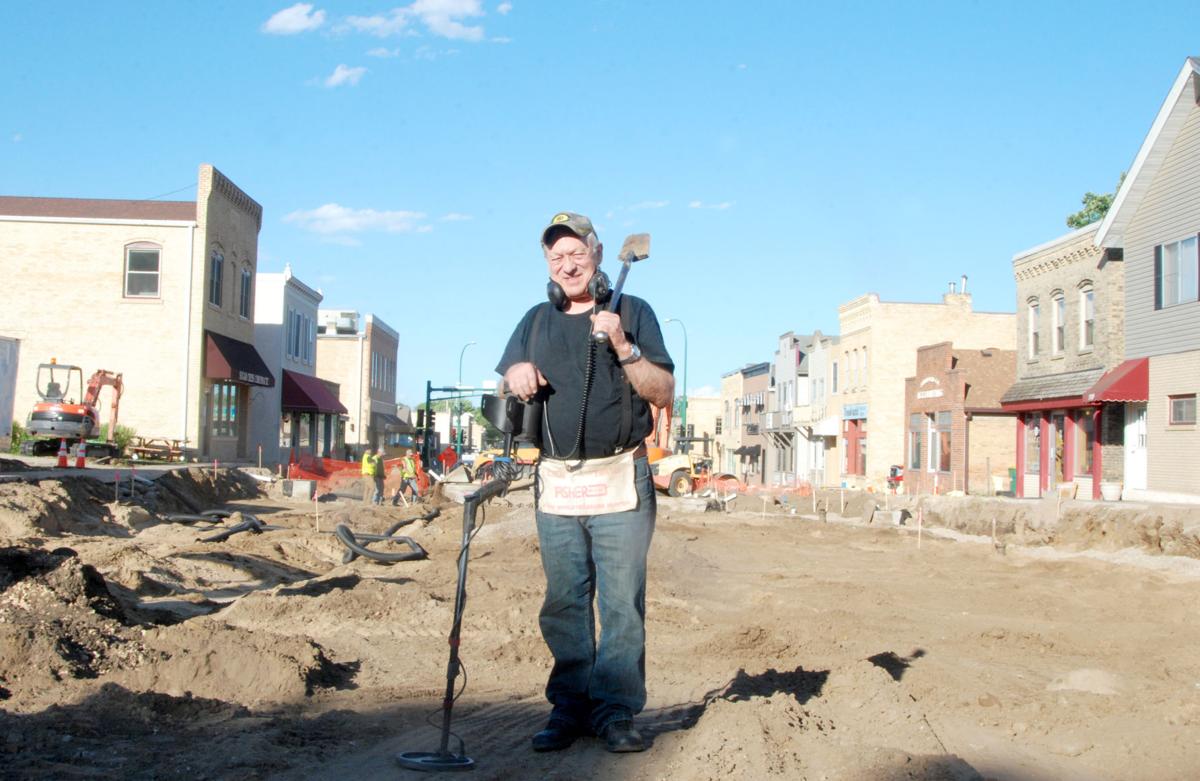 Bruce Langbein, of Bloomington, has been scouring the Second Street construction site in downtown Chaska with his metal detector over the past few weeks. He’s found over 30 old coins and a number of tokens and other artifacts. 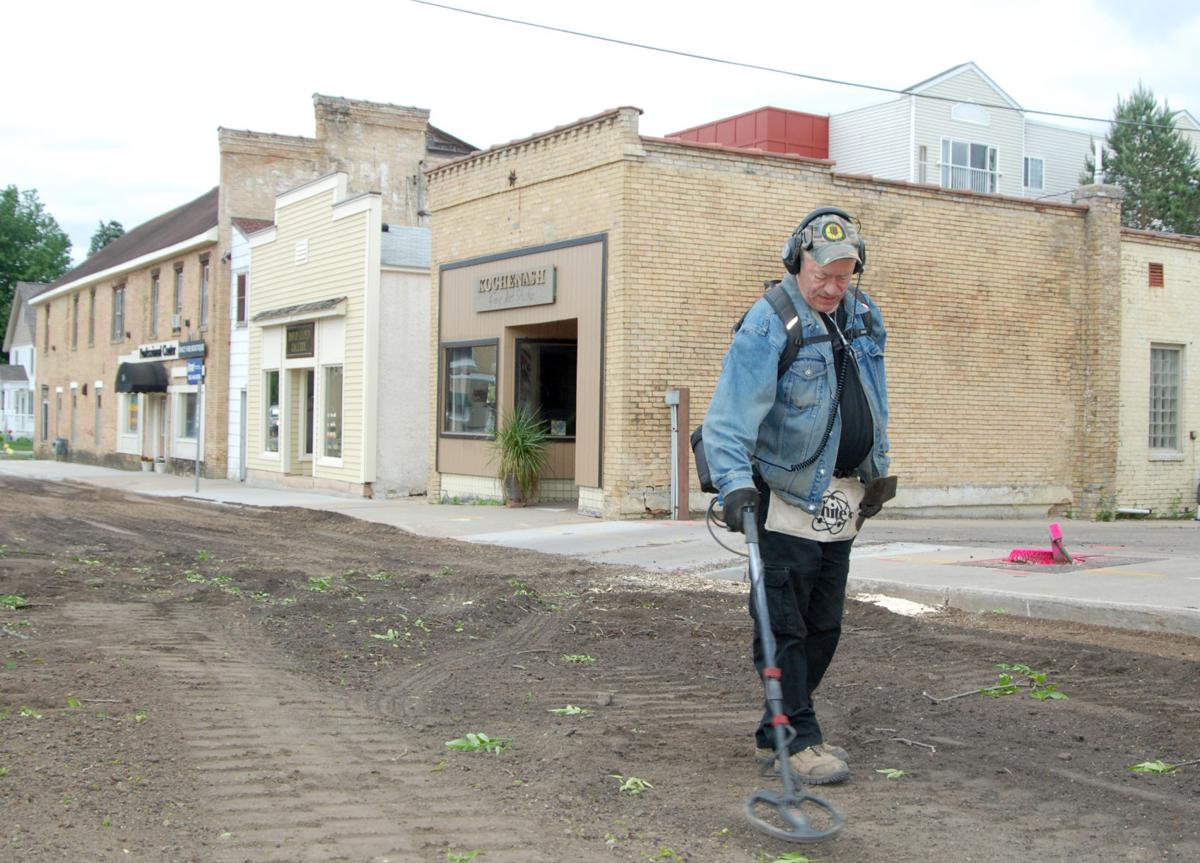 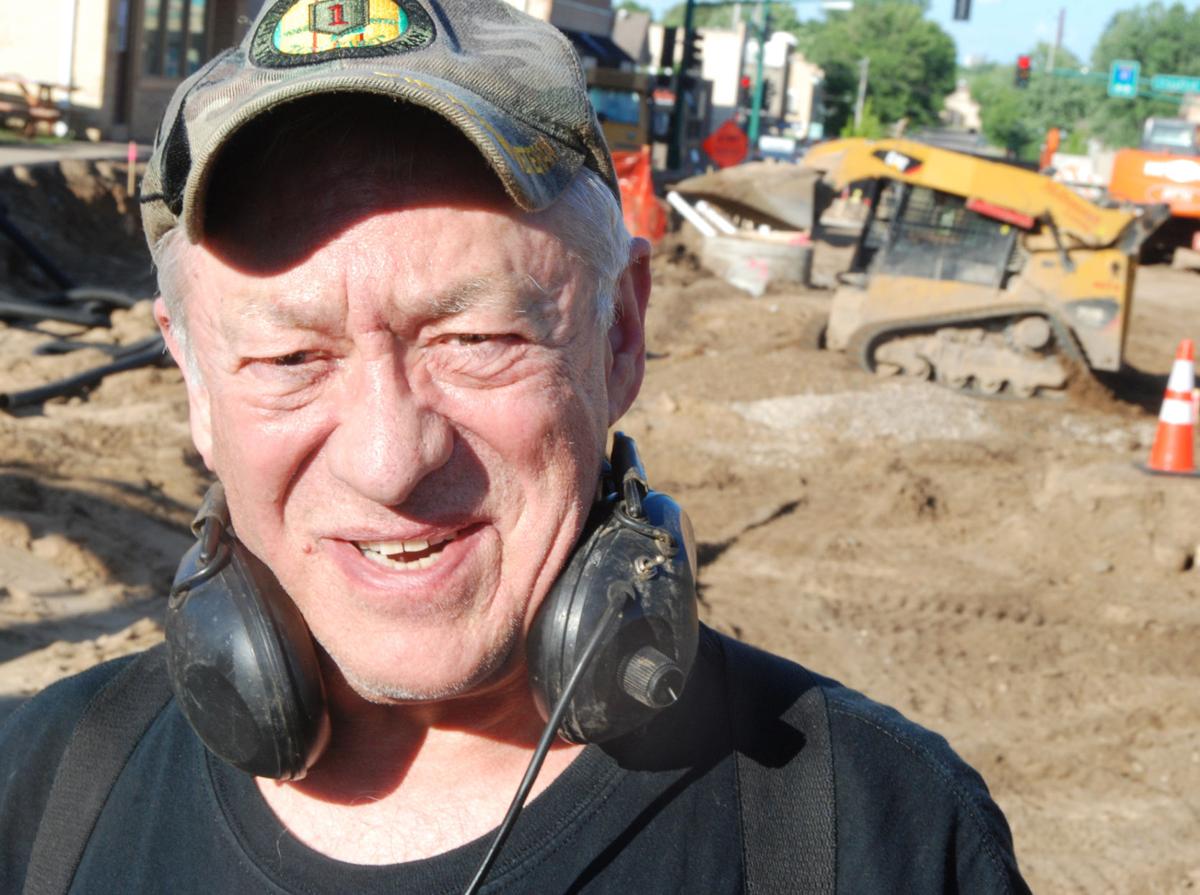 Bruce Langbein has been a metal detector enthusiast for over 30 years. 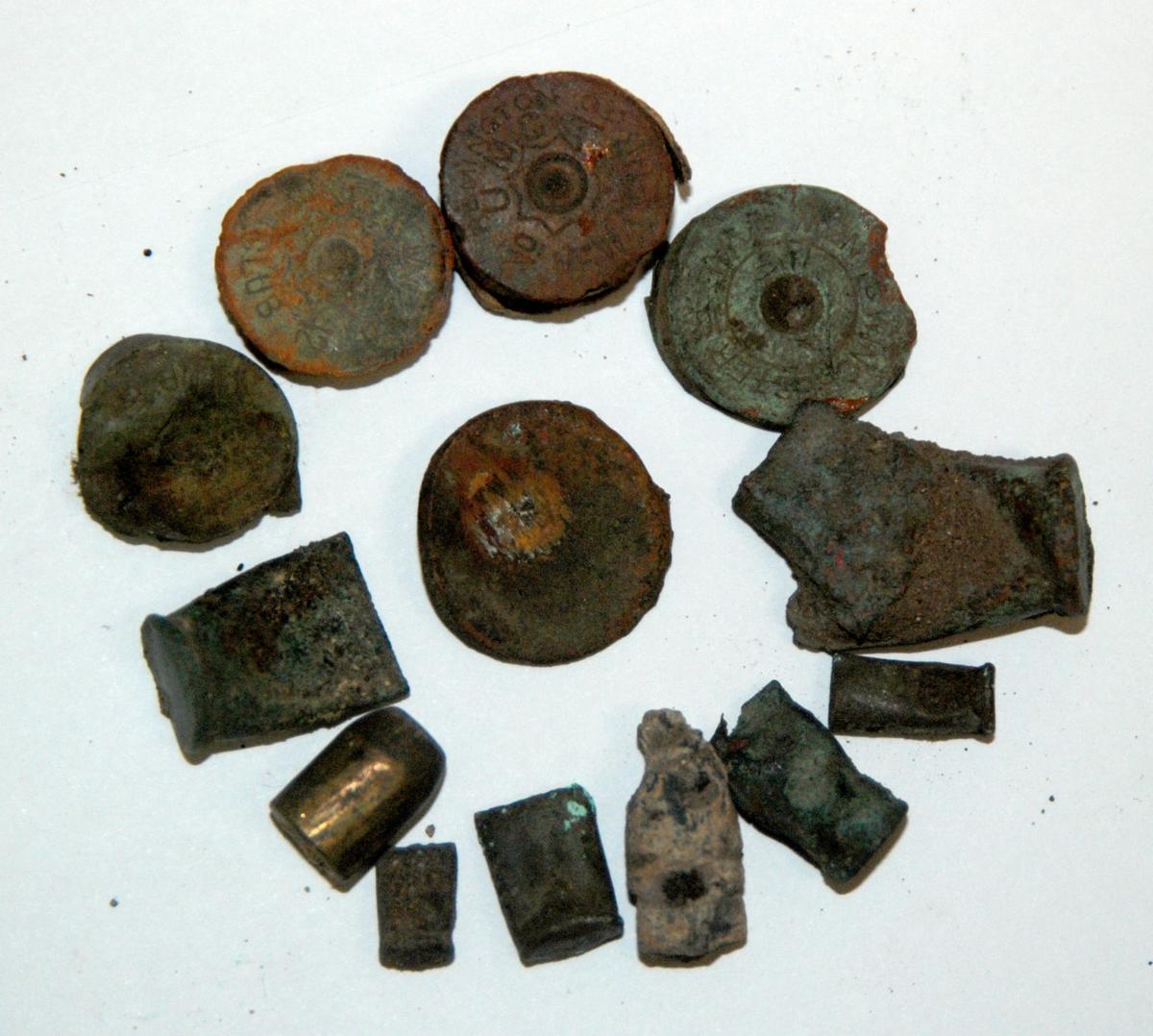 Gun slugs and cartridges — dating back to Civil War era — found by Bruce Langbein on Second Street, Chaska. The center item is a slug apparently hit by a bullet. 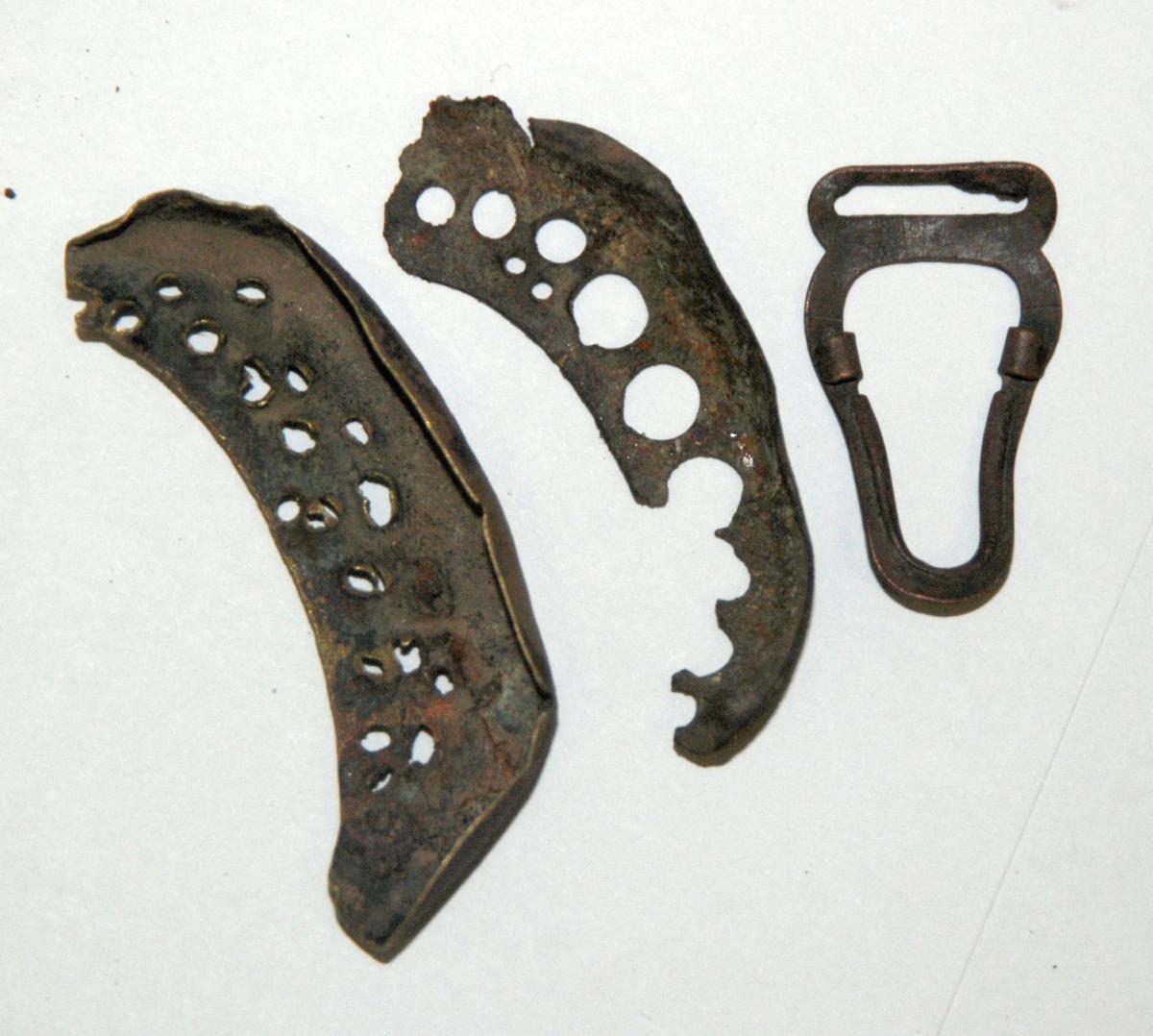 Brass shoe cleats and a garter belt latch and other miscellaneous items were found on Second Street. 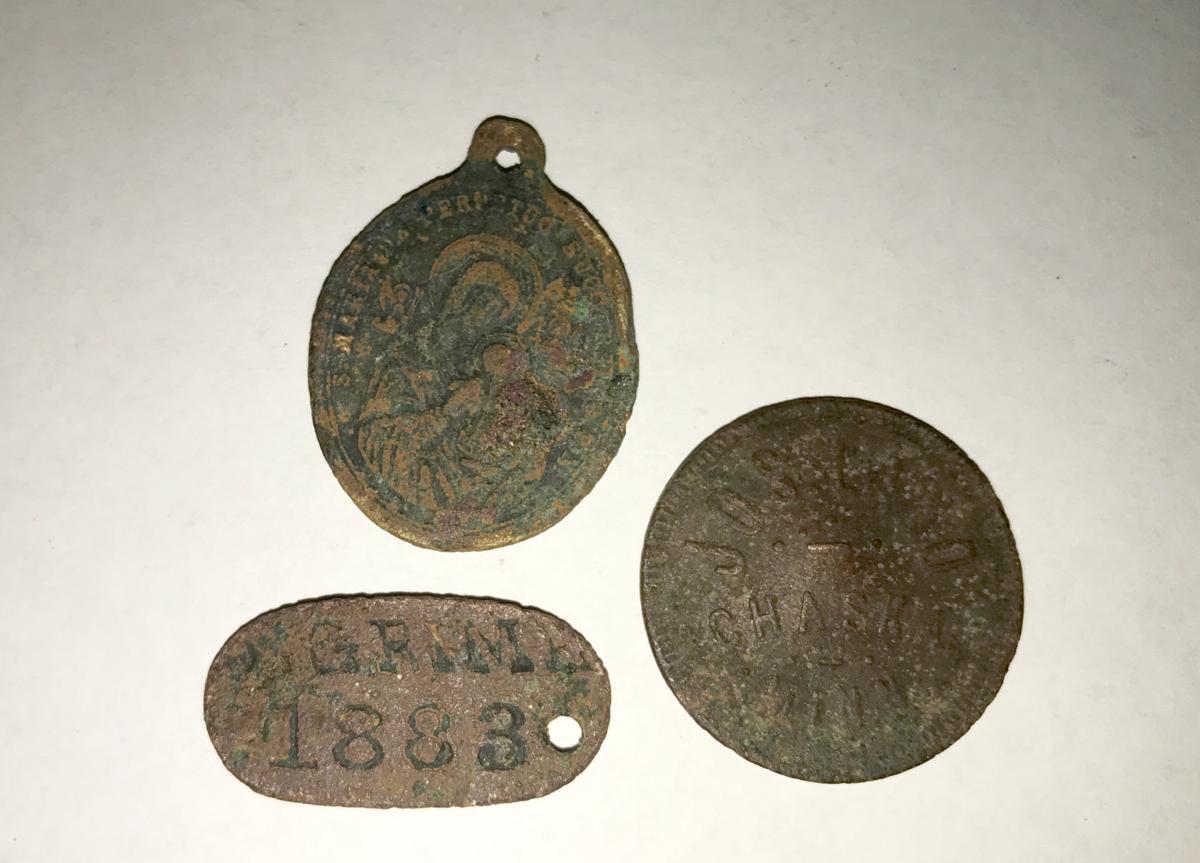 Bruce Langbein’s Second Street finds include (clockwise from top): a religious medallion; a token for one quart of milk from Joseph Lano; and a metal tag from 1883. 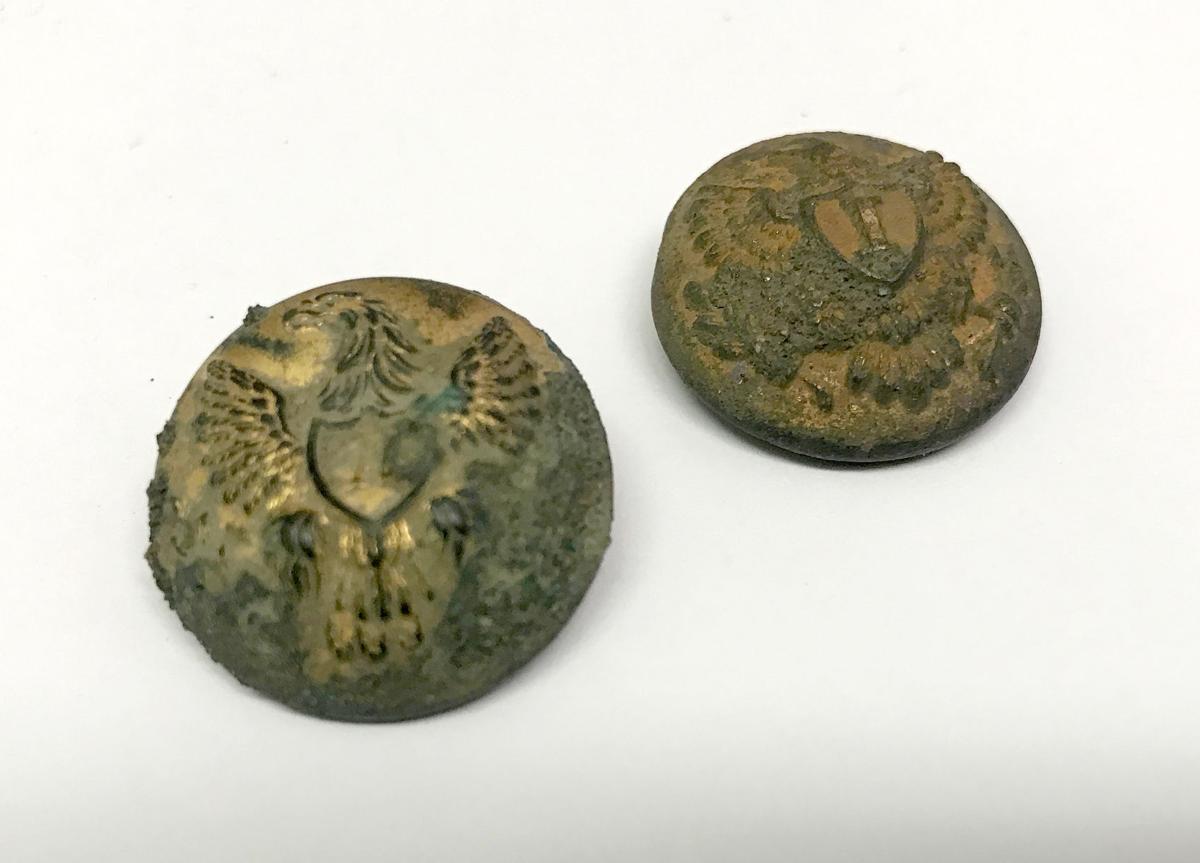 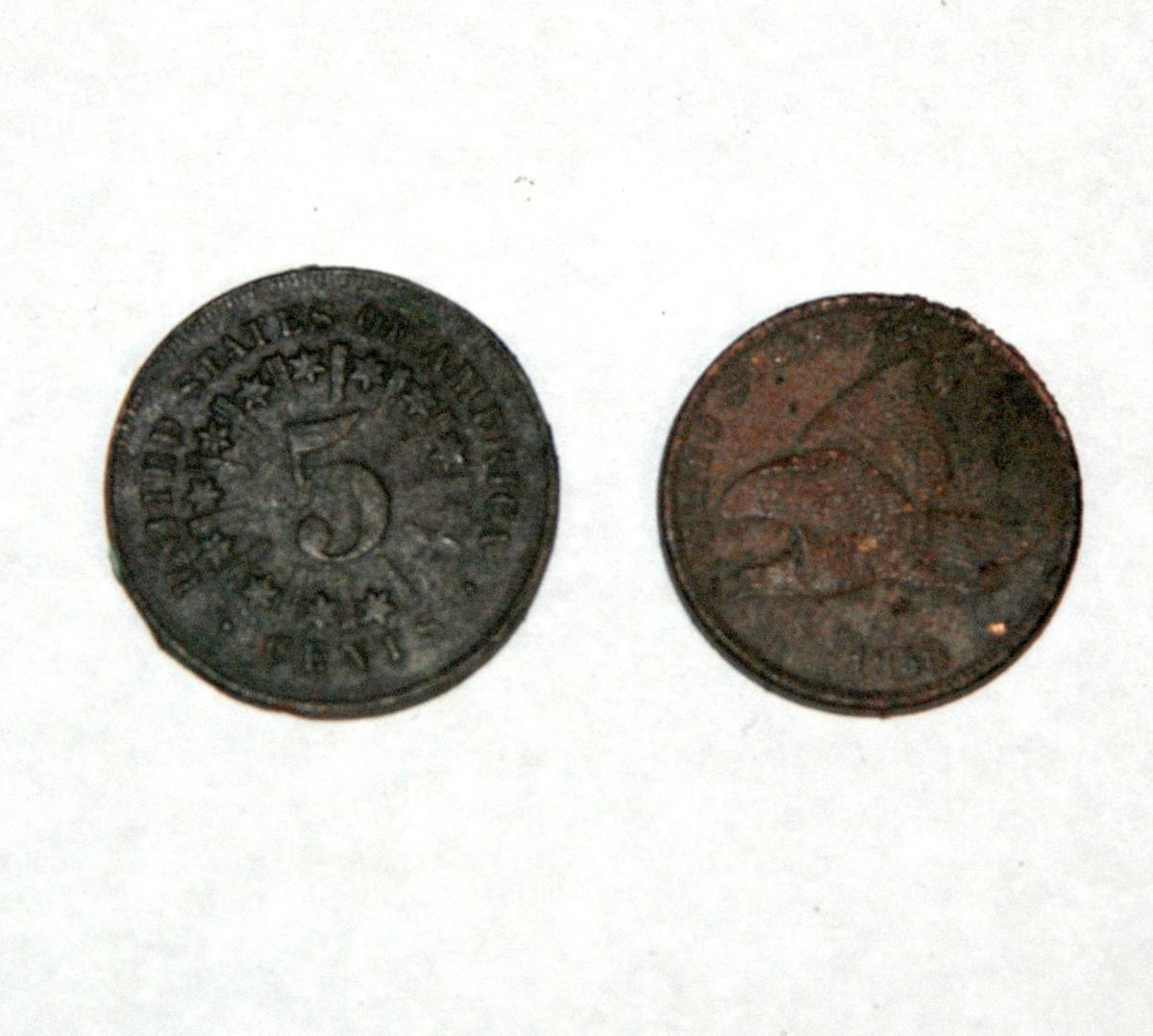 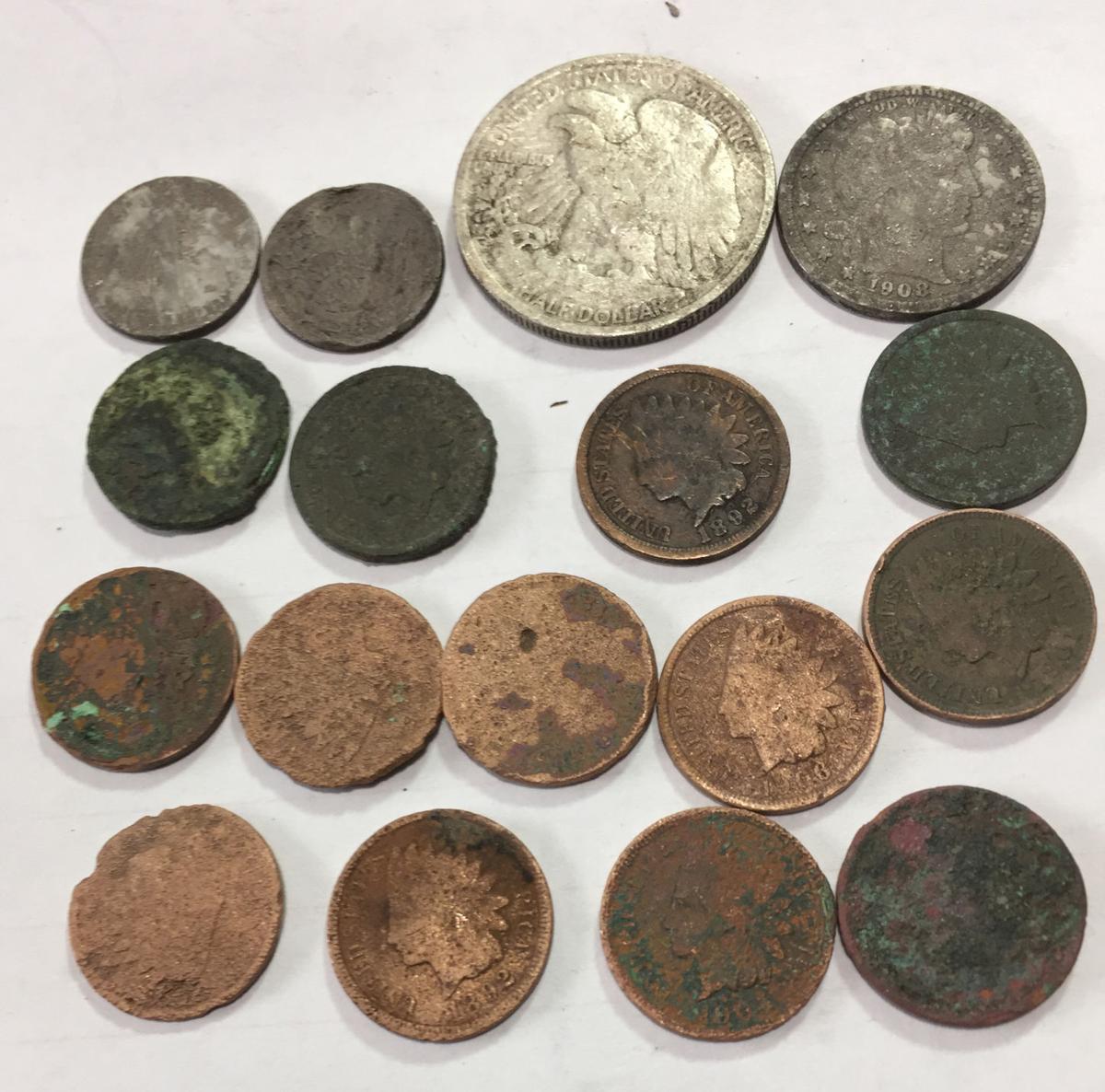 A few of the old coins found on Second Street by Bruce Langbein.

Bruce Langbein, of Bloomington, has been scouring the Second Street construction site in downtown Chaska with his metal detector over the past few weeks. He’s found over 30 old coins and a number of tokens and other artifacts.

Bruce Langbein has been a metal detector enthusiast for over 30 years.

Gun slugs and cartridges — dating back to Civil War era — found by Bruce Langbein on Second Street, Chaska. The center item is a slug apparently hit by a bullet.

Brass shoe cleats and a garter belt latch and other miscellaneous items were found on Second Street.

Bruce Langbein’s Second Street finds include (clockwise from top): a religious medallion; a token for one quart of milk from Joseph Lano; and a metal tag from 1883.

A few of the old coins found on Second Street by Bruce Langbein.

During the day, Second Street in downtown Chaska is a cacophony of construction and a ballad of beeps.

However, once the din dies down and workers leave, hard hats in hand, a solitary man walks the dusty road.

He’s a prospector of history.

Bruce Langbein, a 66-year-old Bloomington resident, is a detectorist. You know — those guys most picture walking the Florida coastline, metal detector in hand, looking for tiny treasures.

However, Langbein plies the streets of the metro.

“Other than finding old stuff that people lost a long time ago, or discarded, it’s historically interesting,” Langbein said. “I’ve been doing it for so long it’s become kind of more of a habit than anything else.”

Most people go about their business oblivious to what lies beneath their feet. But Langbein knows.

Nowadays, roads are engineered with several feet of gravel and sand, before the final layer of pavement. However old roads and sidewalks, like those in downtown Chaska, are mostly just pavement on top of dirt roads that were used for over 70 years.

Perhaps a hapless drunk lost a few coins staggering out of a Second Street bar. Maybe a button popped off a uniform during a local parade. These items may have fallen through a boardwalk, or were covered up by a passing team of horses.

Then, in the 1930s, asphalt was laid, creating sort of a de facto street-long time capsule, until road construction began this summer.

So, before the original dirt from the original Second Street is hauled away to landfills and replaced, Langbein searches for artifacts.

What Langbein has found paints a picture of the town’s history, which dates back to the 1850s. (See detailed list of some of the finds.)

The Second Street discoveries include 32 old coins dating back to an 1858 penny. They also include an old token; lead type, presumably used to print the Herald newspaper; and bullet cartridges and slugs of various calibers leading one to believe Chaska once had the peace and tranquility of a Quentin Tarantino movie.

The bullet cartridges date back to the Civil War. He even found a brass slug that appears to have been shot by a bullet. (A show of gun prowess on Second Street? A visiting Wild West show?)

At other Chaska sites, he’s found a number of different items — a William Jennings Bryan lapel pin from 1896; a watch fob with the Minnesota state seal; a token for a drink at a local bar; two quarters from 1861 and 1862.

The artifacts “say a lot about the culture in which they were created,” said Chaska Historical Society President Lisa Oberski. She notes that history is all around us — whether it’s the small brickyard tunnels discovered last year at Firemen’s Park, or a horseshoe found in her own backyard garden in downtown Chaska.

“History doesn’t stray from its roots as far as we think it does,” she said.

Langbein is a single, soft-spoken Vietnam veteran. He served in the infantry in the 1st Cavalry Division. He was injured by a landmine, which damaged his shoulder, elbow, liver and spleen, and left him in the hospital for four months.

After the military, he attended the University of Minnesota, graduating as an English major.

At some point, a friend rented a metal detector for a weekend, and Langbein joined him. He found a 1973 penny — a coin he has always kept.

In 1982, he began working for the Post Office. That’s the same year he bought a Garrett Groundhog metal detector. “Talk about an aggravating machine. It had a mind of it’s own,” Langbein said. “You’d want to bend it over your knee. It would need to constantly be retuned.”

A couple years later, technology improved and modern detectors are much quieter, he said.

It’s not a hobby to get rich quick.

But those finds are the exception to to the rule.

“The odds are stacked against you,” Langbein said, of discovering valuable items. “You really got to be into it, and I’m overly into it,” he said.

He finds a large number of pennies, keys and pull-tabs (which haven’t been used on beer or soda cans for decades).

His favorite find has a bit of history behind it — an aluminum token sold by a character named “Sailor Jean.” “Sailor Jean” was actually John Albert Krohn, who was walking across America pushing a wheelbarrow at the turn of the century.

In a few rare cases, he has identified the original owner, allowing him to return a soldier’s dog tag to his son, and a charm bracelet to an owner who lost it 50 or 60 years ago.

Many of the items Langbein finds are corroded, and he uses a rock tumbler to clear off decades of deposits. Then, he takes his favorite finds and files them away 2x2-inch holders, placed in binders, noting the location and date found.

He keeps most of the coins, and sells some of the tokens, which can be highly sought after. Langbein recycles much of the rest of the metals — brass, lead, aluminum, copper, even zinc.

Perhaps the real treasure Langbein has found is health.

Langbein has emphysema, and usually detects assisted by an oxygen tank. The hobby ties into his doctor’s orders for regular exercise, and Langbein detects 1-3 hours every day. “It gives me a reason to get out and keep going,” he said.

There’s also some gamesmanship involved. Langbein belongs to Gopher State Treasure Hunters, a Minnesota metal detectorist group. It has a contest for the best coin or artifact found that month. Langbein plans to submit the 1858 penny he found on Second Street.

And Langbein has joined international detectorists on trips to England, where he’s visited about 13 times.

This March, in a town on the coast of the North Sea, he found a cast bronze Viking strap end for a belt with figures of two animals, dating 800-900 AD. “You can just picture a Viking raiding party coming up the hill and raiding the Saxons,” muses Langbein. He’s also found a gold Henry VIII coin on his journeys.

While Langbein relishes his 1800s finds in Minnesota, he notes that English detectorists throw away artifacts from the late 1600s and up.

For Langbein, the only bummer of the hobby is that it’s seasonal. “When construction season’s done, I’m done,” he said.

And he does take a little grief from relatives, who call the hobby “mental defecting.”

However, Langbein said, “It’s just a different way of life, that’s all. Everyone’s got a different thing, and this is mine.”

And this season, Langbein has months of detecting work ahead of him.

A few of the items Bruce Langbein has found with his metal detector during Second Street reconstruction.