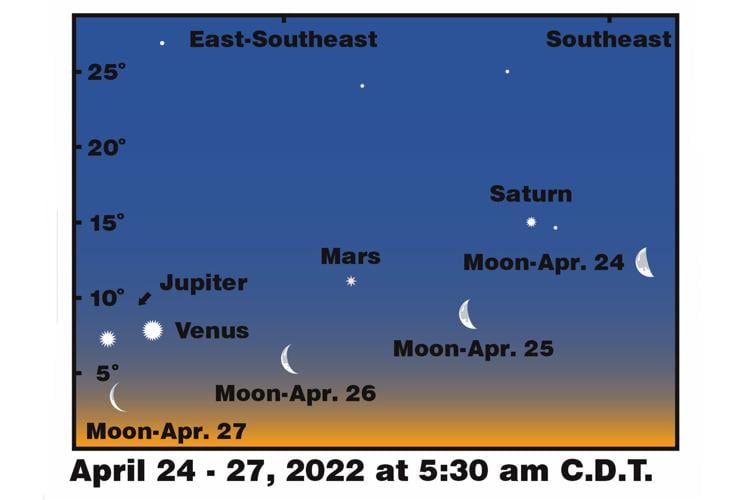 Look between east-southeast and southeast, 45 minutes before sunrise, to see a rare, spectacular planet foursome this week. Use the waning crescent moon to identify Saturn, Mars, Venus and Jupiter as it passes each of these planets one-by-one. The planets are shown as symbols with points in this illustration (to distinguish them from the stars). When viewed in the real sky, the planets look like bright points of light. 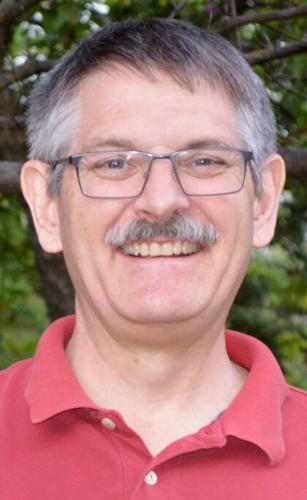 Opportunities to see four or more naked-eye planets confined in a small piece of the night sky are rare events. The last chance we had to see four planets in a compact bunch happened six years ago. The next opportunity to see such array of planets is literally on the horizon.

During the last week of April, early risers will be able to see Venus, Mars, Jupiter and Saturn hanging just above the horizon within a piece of sky covering 33 degrees. Although this may seem like a large angle (since it is close to one-tenth the circumference of a circle), it is actually a very small slice of the sky.

The opportunity to view this quartet of planets will take place during morning twilight from Sunday, April 24 through Wednesday, April 27. Coincidently, the waning crescent moon will pass each of these planets before it disappears into the Sun’s glare. The timing of the moon’s passage by each planet will make locating and identifying them a cinch!

No special equipment will be needed to observe this remarkable “parade of planets” — eyes alone will provide very satisfying views. The accompanying illustration provides an accurate preview. Take note of the time — 5:30 a.m. will be the prime time for observation. This is 45 minutes before sunrise, so the horizon will already be lit by the glow that precedes the Sun’s appearance.

Notice also, that the four planets and moon will be close to the horizon in the east-southeastern to southeastern sky. Be sure to choose an observing site that is free of trees, buildings, hills and other obstructions in this direction. A few of the brightest stars visible in the portion of the sky occupied by the planets and moon have been plotted on the illustration. These stars belong to the constellations Capricornus, Aquarius and Pegasus, but they are not particularly bright ones and may be difficult or impossible to spot.

The four planets and moon will be easy to find. Venus and Jupiter will be dazzling; Mars and Saturn will be less prominent, but still be readily visible. Use the waning crescent moon to help locate Saturn and Mars on April 24 and 25 (notice the planet’s positions in relation to the moon as shown on the illustration).

Hopefully, the morning sky will be relatively cloud-free between April 24 and 27, giving everyone who rises early, a fine opportunity to enjoy the sight of this compact planetary foursome.

Having spent time describing this month’s eye-catching gathering of planets, it is important to remind ourselves that the apparent close proximity of the planets and moon is just that — a juxtaposition as viewed from Earth. If we could fly to a place well above or below our solar system, we would quickly discover that the four planets lie tens or hundreds of millions of miles apart. Thus, we are bound by perspective on the surface of Earth, to view these four worlds appearing to occupy a small expanse of sky, when in reality they are very, very far apart. Such sights are wondrous to behold, but they are also examples of the amazing illusions provided by the heavens.

One more grand celestial delight awaits early risers during the final days in April. Venus will close the gap between itself and Jupiter and on Saturday, April 30, these two dazzling planets will appear side-by-side, with half a degree separating them.

This angle is equal to the apparent size of the full moon. The next time these two worlds will “appear” this close before sunrise, will be Feb. 7, 2032. Whatever else may or may not take place in April 2022, this is the perfect time to check out an awesome “parade of planets!”

Rod Nerdahl has taught and written about astronomy and space exploration for nearly 50 years. He worked as one of the astronomy educators at the Minneapolis Planetarium for 27 years. He was also prepared all of the astronomical material published in the Minnesota Weatherguide Calendars for 28 years. He and his wife Peggy live in Chaska.