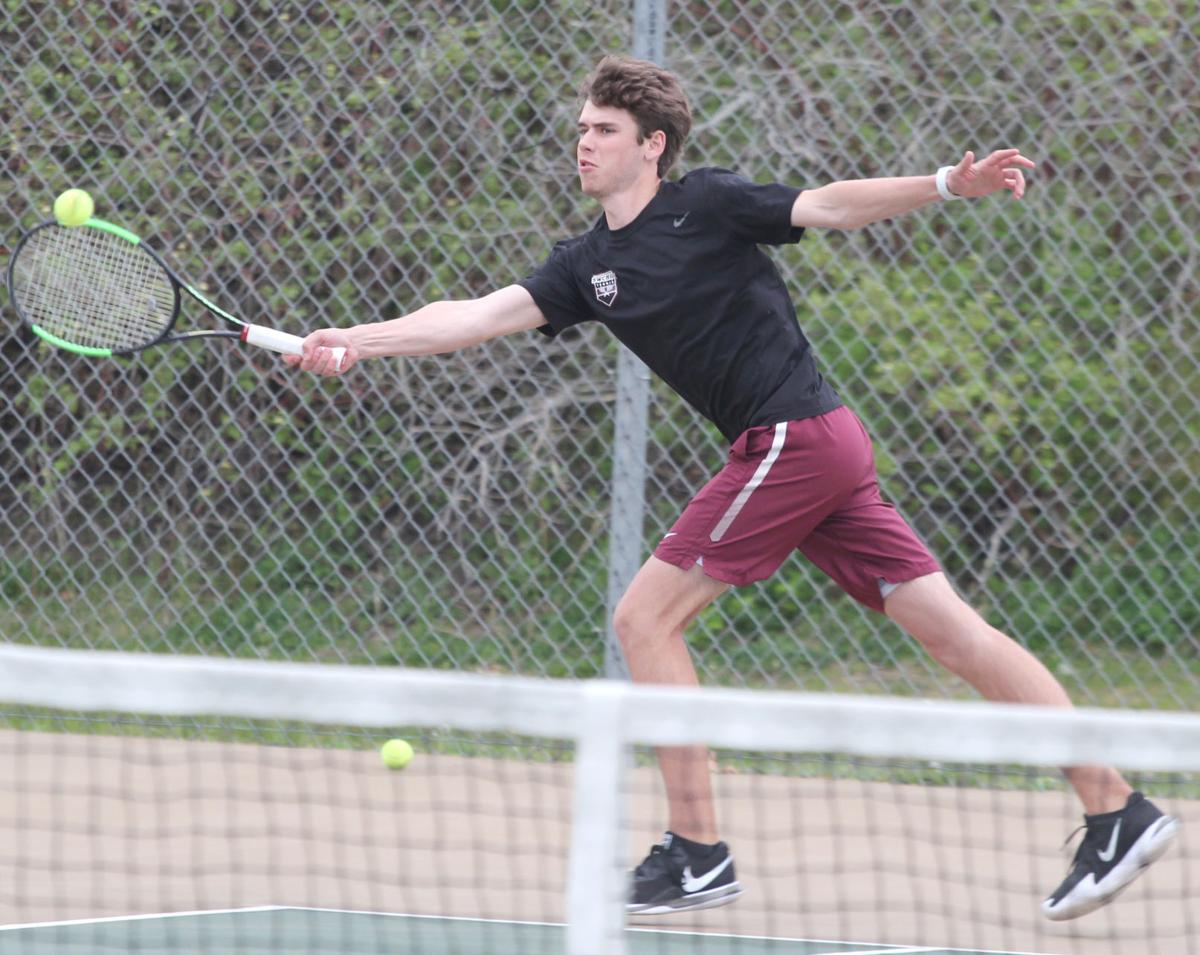 Southwest Christian senior CJ Velgersdyk, the team’s No. 1 singles player since his sophomore season in 2019, owns a 20-4 record in that position. 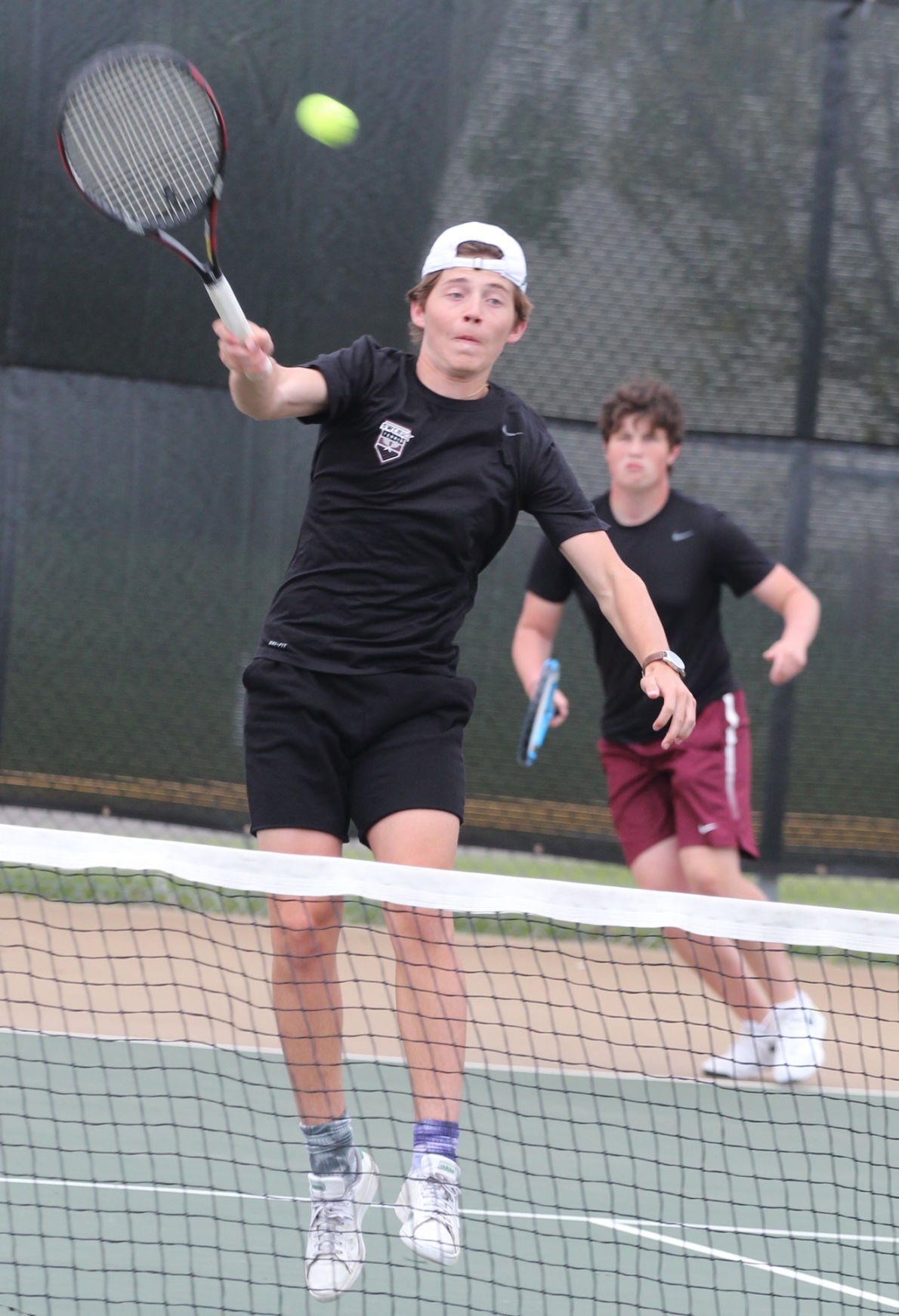 Southwest Christian senior Caleb Vick finishes a point at the net in a match with Holy Family Catholic on May 14. Vick and teammate Luke Schwen won 6-0, 6-2. 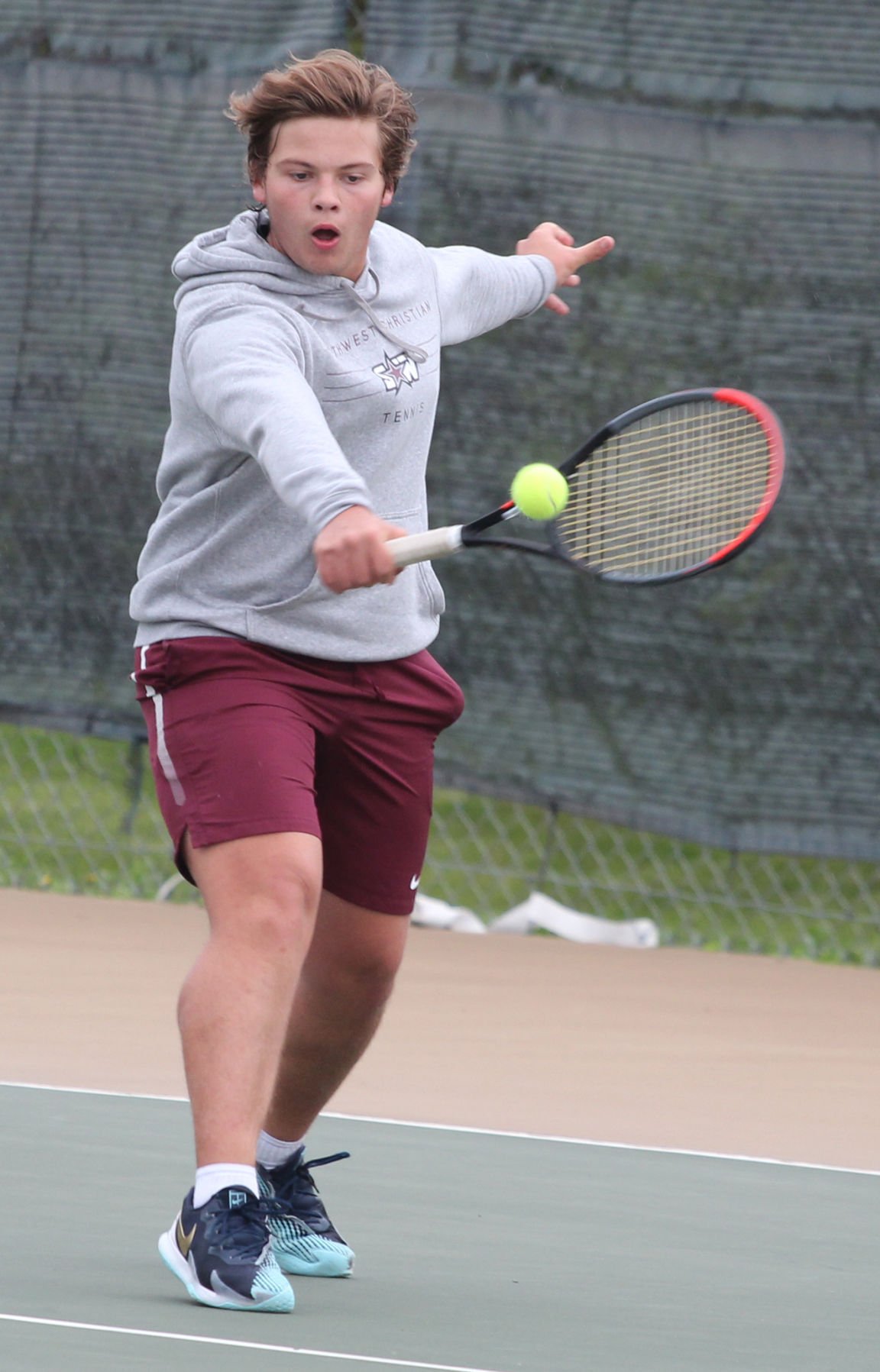 Connor Galloway, playing between No. 2 and 3 singles this season, has given Southwest Christian solid results, leading to a 9-3 team record. 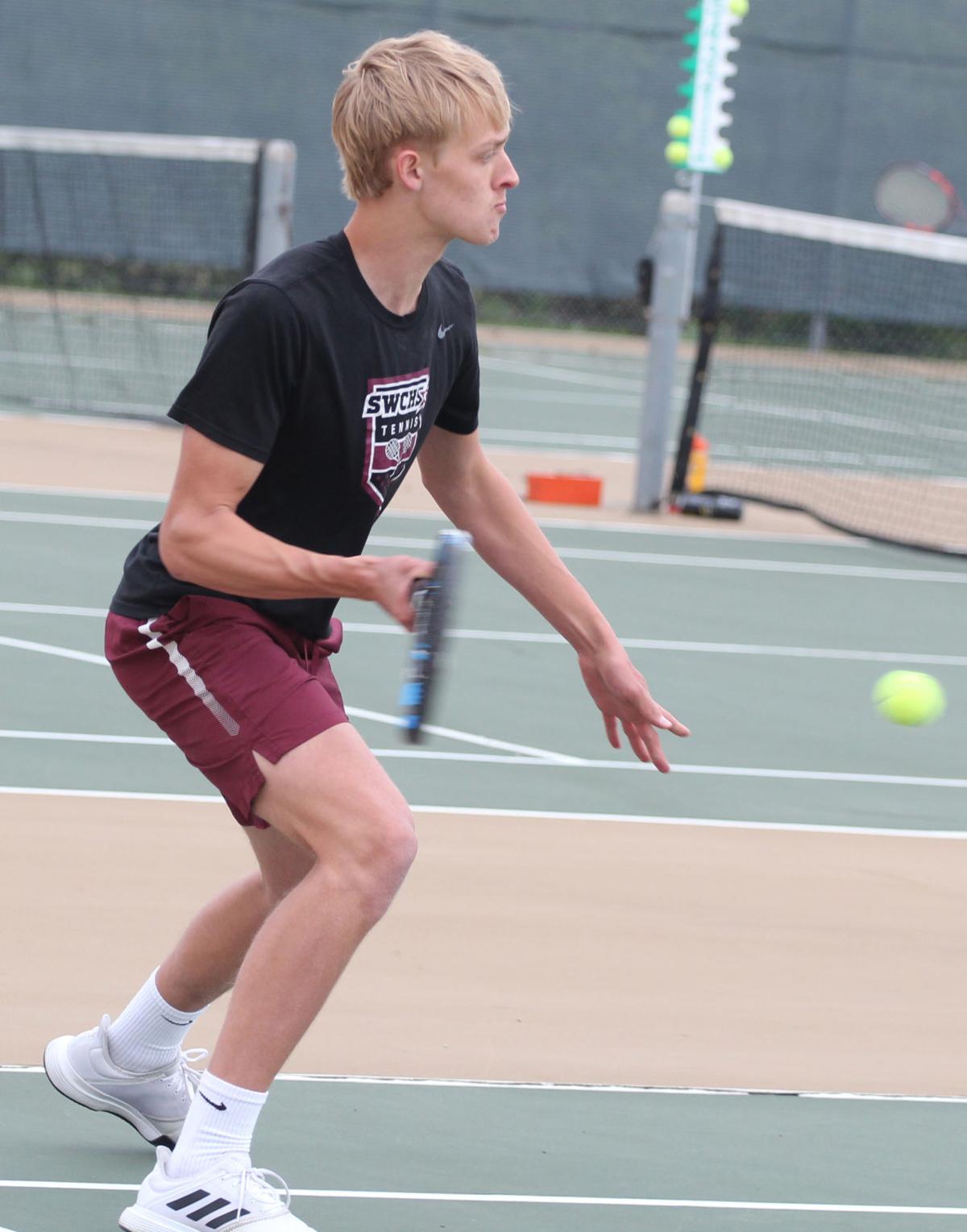 Bergen Rosdahl's wingspan made him dominant at the net for the Southwest Christian top doubles team with Caleb Denney.

Southwest Christian senior CJ Velgersdyk, the team’s No. 1 singles player since his sophomore season in 2019, owns a 20-4 record in that position.

Southwest Christian senior Caleb Vick finishes a point at the net in a match with Holy Family Catholic on May 14. Vick and teammate Luke Schwen won 6-0, 6-2.

Connor Galloway, playing between No. 2 and 3 singles this season, has given Southwest Christian solid results, leading to a 9-3 team record.

Bergen Rosdahl's wingspan made him dominant at the net for the Southwest Christian top doubles team with Caleb Denney.

CJ Velgersdyk had never picked up a tennis racket until older brother Isaac was introduced to the sport as a freshman at Southwest Christian High School. Brothers, you know, if one does something the other has to as well.

"It's the competitive brother thing. You always want to do better than your brother," CJ said.

Both have done it well for the Stars boys tennis team. The Velgersdyks have held the No. 1 singles spot in the line-up from 2016 to this spring. Isaac, in his second year in the sport raised his game quickly, playing three years at No. 1.

CJ, or Caleb, was slated to do the same, taking over for his graduated brother in 2019, posting a 10-2 record. After the 2020 season was cancelled, Velgersdyk is back doing big things as a senior. He's again 10-2 overall with a few matches remaining.

He said no two matches are the same, the fun challenge of playing in the top spot against the other team's best.

"At the one spot throughout the season I have seen so many different styles. There was a guy like (Pierre O'Driscoll of Schaeffer Academy) that is more of a push player. And then there are guys who play with pure power. You have like 15 minutes of warm-ups to really see what you're going up against. To find their strengths and weaknesses, and then adapting to your opponent," Velgersdyk said.

On varsity tennis since seventh grade, Velgersdyk has seen a transformation in the program. Southwest Christian, with a 9-3 record, is having its best season to-date. They have won eight matches in a row, topping programs like Hutchinson, Delano, Providence Academy, St. Peter, Chaska, Minnehaha Academy and Holy Angels that have beat them in the past.

The Stars even avenged one of their three losses this season, beating Class A top-10 Schaeffer Academy the second time around.

"It's kind of hard to believe. It's really amazing. Looking back, if you said our team would be 9-3 at this point of the season I would have been shock," Velgersdyk said.

Not because of a lack of talent, he said, but rather because of so many unknowns after losing a season on the court together in 2020.

"I have had such a fun season with the guys. It always helps to get a few wins, but the community of guys we have, being around each other has been so great. I wish I had a couple more years with these guys," Velgersdyk said.

WHAT'S BEEN THE DIFFERENCE?

Velgersdyk said it's been the dedication of each and every player.

"All of the hard work put into it. Each individual puts in their time. Connor (Galloway) and I came up with captain's practices, but each and every guy has invested their time and energy this season," he said.

While the 2020 season was cancelled, Southwest Christian was able to run captains' practices up through the shutdown. Individuals were able to meet up from time to time during the summer as well.

Captain's practices were well attended from January to March this season as well.

"It really helped that the guys showed up, they hit, and got a head start on the season. I really feel like we have invested a lot of time on the younger guys. Coach (Gary Schmidt) and I have held camps for the younger players and we've been able to teach them a lot. I really feel it has led to a strong deep line-up," Velgersdyk said.

Southwest Christian has won at all seven positions four times this season with two wins decided by 4-3 scores. Velgersdyk's win over Pierre O'Driscoll in three sets, 2-6, 6-2, 6-2, clinched the decision over Schaeffer Academy.

"We really are stepping up with the encouragements to the courts next to us. Telling our teammates great job. Those words help get us back focused in the match, or it keeps the momentum going," Velgersdyk said.

Other players have come up clutch as well including seniors Caleb Denney, Bergen Rosdahl and Caleb Vick in doubles and Galloway in singles.

"My hope for the program is we continue to keep growing, investing in our young players. I hope the next leaders of this team keep it going with captains' practices. I hope the close knit atmosphere continues. I've had just so many fun times with the guys," Velgersdyk said.

The journey is just beginning for the Stars. Velgersdyk is heading to Big Sky country at Montana State University. He's looking forward to the new experiences, meeting new connections.

That's what six years ago was for Velgersdyk. Here's a racket, here's a tennis ball, go play. And what was developed was something great.

Eight in a row

* Caleb Vick and TJ Ringer won a first-set tie-breaker before scoring a 6-4 decision in the second set for the clinching point at No. 2 doubles.

* TJ Ringer and Sean Johnson were the first ones off the court, a 6-0, 6-1 win. Caleb Vick and Luke Schwen were just minutes behind with a 6-0, 6-2 decision in the second doubles spot.

* Won all seven matches in straight sets to improve to 9-3 overall.