Mandy Matula’s jersey No. 14 from her days at Eden Prairie High School and the University of Minnesota-Duluth dons the scoreboard at field four at Miller Park. Lisa Matula, her mother, has been a part of the Eden Prairie Fastpitch Association for 19 years; this year her last.

A purple bench adorning the number 14 sits at Miller Park, in honor of former Eden Prairie and University of Minnesota-Duluth star Mandy Matula. Her mother, Lisa, is in her 19th year as a tournament director for Eden Prairie Fastpitch Association. 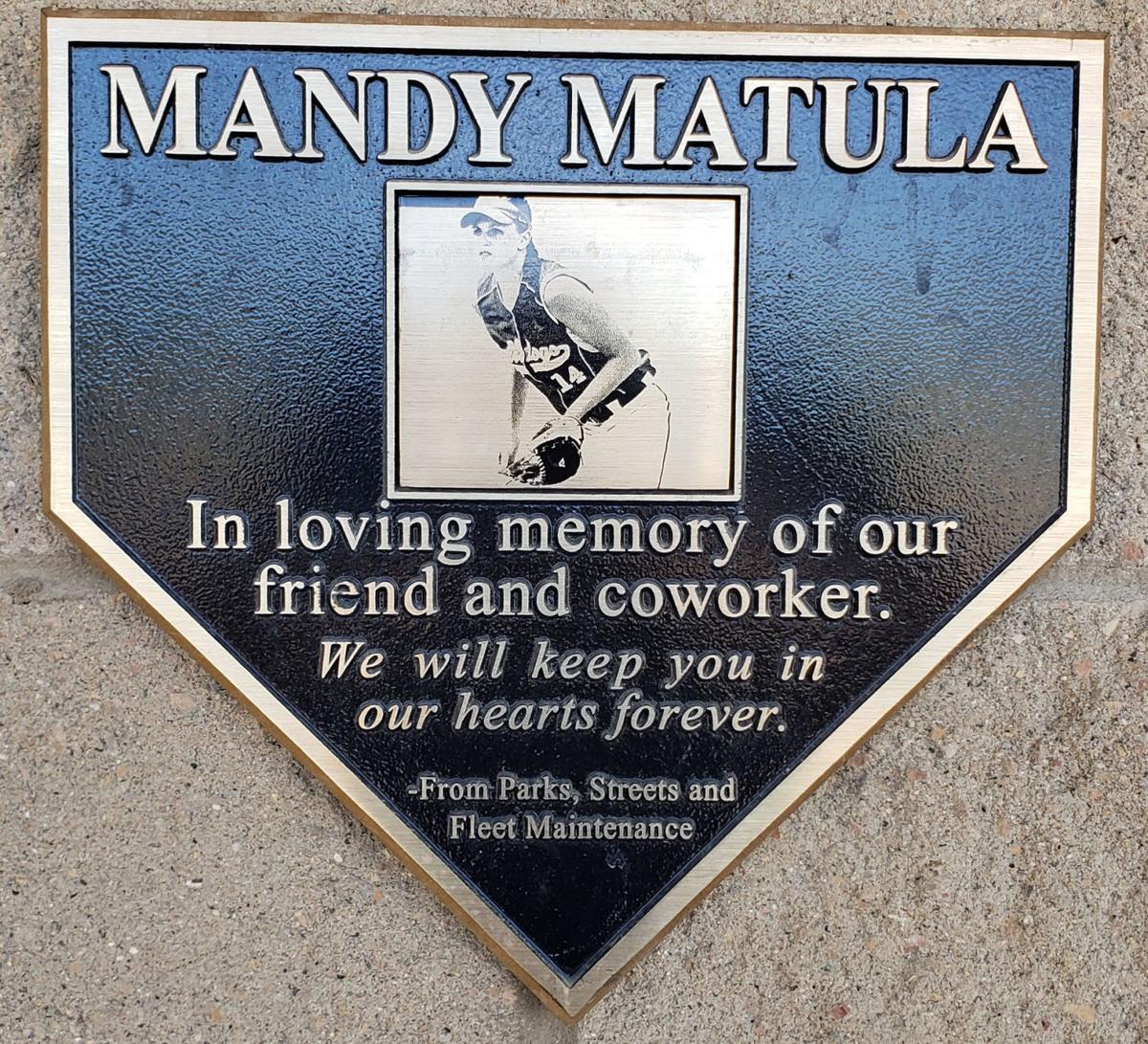 The City of Eden Prairie dedicated a plaque in honor of Mandy Matula at Miller Park. "In loving memory of our friend and co-worker. We will keep you in our hearts forever."

Mandy Matula’s jersey No. 14 from her days at Eden Prairie High School and the University of Minnesota-Duluth dons the scoreboard at field four at Miller Park. Lisa Matula, her mother, has been a part of the Eden Prairie Fastpitch Association for 19 years; this year her last.

A purple bench adorning the number 14 sits at Miller Park, in honor of former Eden Prairie and University of Minnesota-Duluth star Mandy Matula. Her mother, Lisa, is in her 19th year as a tournament director for Eden Prairie Fastpitch Association.

The City of Eden Prairie dedicated a plaque in honor of Mandy Matula at Miller Park. "In loving memory of our friend and co-worker. We will keep you in our hearts forever."

Miller Park is like home to Lisa Matula. It's where she watched her daughter, Mandy, play softball most summer nights. It's where for 19 years, she's been tournament director for Eden Prairie Fastpitch Association.

July 26-29, four days of softball, 84 teams coming together from all across the Upper Midwest and Canada for the 2018 NAFA Northern Nationals 14s Tournament, is the end of the line for Matula.

Retirement from the position awaits.

"It's home," said Matula of Miller Park. "It's one of the most beautiful parks around. I love being around the fields, the game."

Miller Park will always hold a special place in the heart of Matula. A look up at the scoreboard on Field 4 is a reminder of her daughter; jersey number No. 14 is displayed.

Mandy, a standout on the softball team at the University of Minnesota-Duluth, was murdered in May 2013. Softball was a passion of hers, whether playing or coaching.

For Lisa, seeing the joy the game brings to girls of all ages at Miller Park, the NAFA tournament each year, reminds her of the memories with her daughter.

"My daughter, that's one of the reasons I've stayed on and run the tournaments. That place is my memories. If they'd let me, I'd put a one in front of that four on that field," Matula said, referring to Mandy's jersey number.

"She absolutely loved softball. And so did I. You watch them grow up from when they are so little and it really turns into a game. The competitiveness is so much fun to watch," she added.

Eden Prairie has been host to the 14s tournament for roughly seven years. NAFA (North American Fastpitch Association) has been running regional championships in Minnesota for 20-plus years.

The event started at the 10- and 12-year-old divisions in Eagan and has branched out to five local tournaments spread out across the Twin Cities. The 10s play at Lamar Park in Cottage Grove (previously at Dred Scott Fields in Bloomington); the 12s reside at Northview Park and Lexington-Diffley Fields in Eagan; the 14s at Miller Park in Eden Prairie and Legacy Fields at Minnetonka High School; the 16s play at Rice Creek Fields in Shoreview; with the 18s at Community Park in Chaska.

More than 300 teams from Minnesota, Iowa, Wisconsin, Nebraska, Illinois, Michigan, North and South Dakota, and Canada, are registered for the tournaments over the last two weekends in July.

A parade of teams for opening ceremonies, exchange of gift bags, team pin trade, and skills competitions are also a part of the tournament fun.

"There is some good ball. These girls are in high school. They know how to play. They travel from all over. It's exciting to watch," Matula said.

Jason Karrmann, co-traveling league director for the Chaska Youth Fastball Association, has been a part of the NAFA tournaments for a handful of years. Hosting the 18-year-old division, Chaska's fields have been home to future and current collegiate athletes for around a decade.

"We try and get our girls to come and watch," Karrmann said of the local Chaska association. "We've got college girls. We've got top high school players. It's really a treat to watch. It's something we all circle our calendars for."

Of the 45 teams registered for the Chaska tournament, 32 are from out-of-state, a boost to the local hotels, restaurants and the overall economy.

In Eden Prairie, 37 teams are from out-of-state with an additional nine teams from greater Minnesota. With around 12 players per softball team, expect to see plenty of minivans with painted windows supporting the teams in the area July 26-29.

"This is going to be the biggest group of teams we've had. We've been around 30 or 32 teams most years and this year we're at 45. It's been really exciting for our association to host. It's a high level of softball," Karrmann said.

One of NAFA's core values is building up girls, giving them a place of opportunity in softball. For local Minnesota softball organizations, embracing those beliefs is much more rewarding than the final score.

"I think it teaches a lot of good life lessons. We're building friendships, relationships between kids that last into high school and hopefully beyond. They learn how to win and lose. How to be good leaders. How to face adversity. All things that go beyond the softball diamond," Karrmann said.

Softball is something near and dear to my heart as well. Since moving to Eagan in 2011, our daughter, now a sophomore at Eagan High School, has participated in fastpitch.

I was named Minnesota State Director this past January and have worked to keep the opportunities NAFA provides available to our local associations. So often, I hear from people who played in the national events years ago. From people who watched their daughters compete against teams from across the region.

I think back to the eighth and final day of a two-weekend run as a tournament director last summer. We always ask during medal ceremonies for the coaches' daughters to present medals to their dad or mom. More than a handshake was needed for one girl, as she jumped into her dad's arms. Tears flowing from both (and certainly I).

These moments truly impact our lives for years and years. I'm excited to again be a part of this the next two weeks.