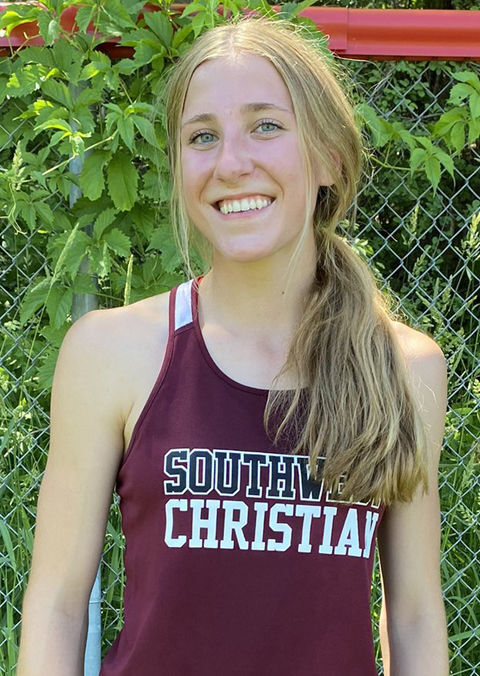 Southwest Christian freshman Mehlayna Straub will compete at state track in three events — the 100 and 200 meters, and triple jump. 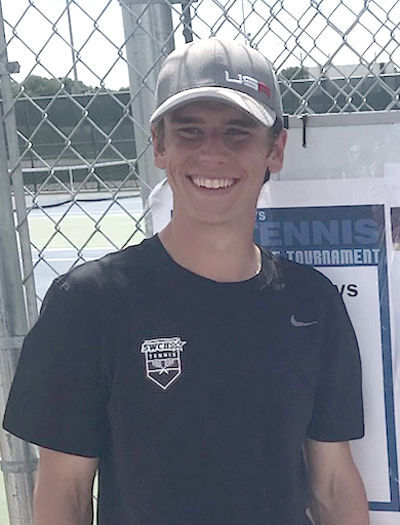 CJ Velgersdyk, the first Southwest Christian tennis player to advance to state, went 1-1 in the Class A singles tournament June 10.

Southwest Christian freshman Mehlayna Straub will compete at state track in three events — the 100 and 200 meters, and triple jump.

CJ Velgersdyk, the first Southwest Christian tennis player to advance to state, went 1-1 in the Class A singles tournament June 10.

Mehlayna Straub has been a standout on and off the track for Southwest Christian as a freshman. She backed up her season performances with three state-qualifying efforts at the Section 2 Meet in Mankato on June 12.

Straub was second overall in three events -- the 100 and 200 meters, and triple jump. Her jump of 34 feet, 7 1/2 inches, was a school record. Her best distance came in her fourth and final attempt, moving the tape two feet farther.

Straub started the day with a runner-up finish in the 100 meters, a time of 13 seconds flat. She was also second in a personal-best time of 26.21 seconds in the 200 meters.

Southwest Christian freshman Kaitlyn Wercinski added a 10th-place time of 1:05.91 in the 400 meters with the 4x400 relay team of Straub, Wercinski, Lillian Rediger and Taylor Scott coming up one spot short of state, placing third in 4:20.47.

Southwest Christian was eighth overall with 30 points in the girls standings.

Junior Brandon Mosley had the Stars' top individual finish with a 13th-place running in the 400 meters in 56.10 seconds. Southwest Christian was also eighth in the 4x200 relay in 1:41.72.

Southwest Christian won the most matches in boys tennis program history. They won their first playoff match, and then another, placing second to eventual Class A state champion Breck School.

The Stars also qualified their first state participant, senior CJ Velgersdyk, and on June 10, the program picked up its first state win.

Velgersdyk defeated Jared Delich of Virginia in the opening round at St. Cloud Tech High School by a 6-3, 6-4 decision.

In the quarterfinals, down 5-4 in the second set, Velgersdyk broke serve, winning 7-5 to force a third set with second overall seed Marjan Veldic of Rochester Lourdes.

Velgersdyk leaves the Southwest Christian program with the most singles wins.

State champions were Clayton Haberman in singles, and Ishan Nadkarni and Zack Piehl in doubles for Breck School.

Six outs from its first state tournament, one inning proved to be Southwest Christian's undoing, as top-seeded Glencoe-Silver Lake seized the momentum and never let go in the Section 5AA championship series June 10 at Saints Field in Dassel.

The Panthers, the No. 1 seed in the Class AA State Tournament, won 9-2 and 8-2 to clinch the section title.

In game one, the Stars took a 2-0 lead on a Koby McBroome RBI-single in the third inning with a second run crossing home plate on an error in the fifth inning.

Glencoe-Silver Lake strung together nine runs, aided by five walks in the sixth inning, to rally to force a second game.

Lucas Anderson was 2-for-3 with two runs scored, while Brayden Zimmerman collected two hits. Cade Wiegert threw five innings of shutout baseball before running into trouble in the sixth inning. He finished with five strikeouts.

Wiegert hit a home run in the first inning of game two, but Glencoe-Silver Lake plated multiple runs in the second, third and fourth innings to establish control.

McBroome was 2-for-4 with Adam Tebbs adding a double for the Stars. Ollie Yuhas pitched 2 2/3 innings of relief, allowing no earned runs with four strikeouts.