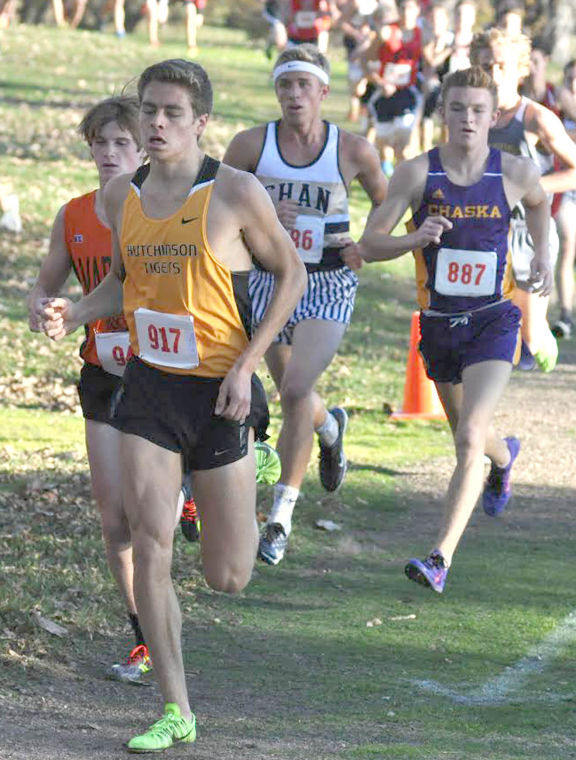 Alec Anderson, far right, runs right behind former teammate Chandler Klawitter of Hutchinson early on in the Section 2AA Meet at Lake Marion near Hutchinson. Anderson ends up in 10th place in his first race since last August. 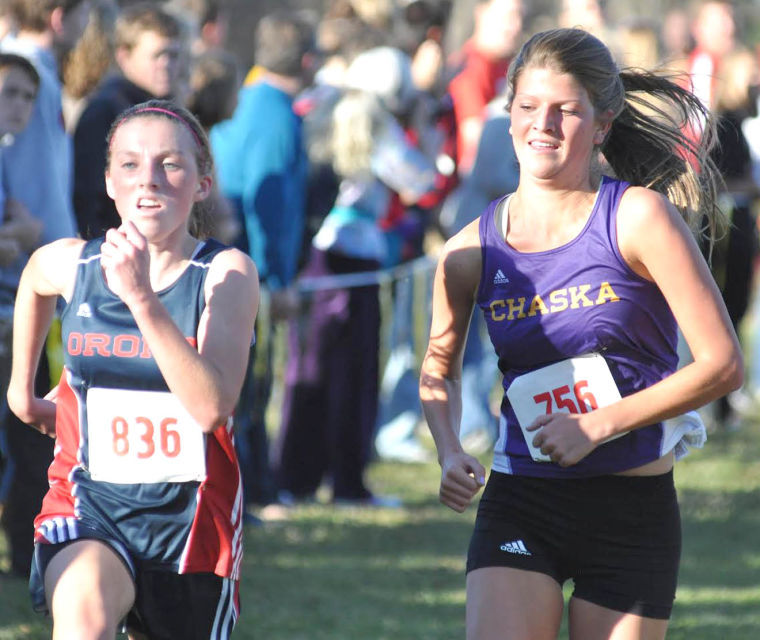 Chaska senior Anna Perrill takes a peek as she passes Orono's Grace Leslie over the final meters, moving into seventh place - the top finisher for the Hawks. 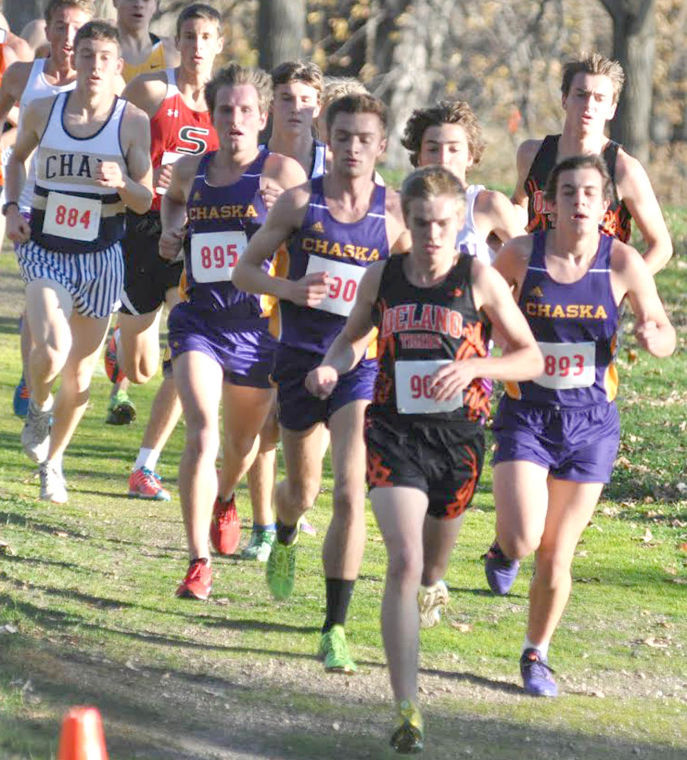 Alec Anderson, far right, runs right behind former teammate Chandler Klawitter of Hutchinson early on in the Section 2AA Meet at Lake Marion near Hutchinson. Anderson ends up in 10th place in his first race since last August.

Chaska senior Anna Perrill takes a peek as she passes Orono's Grace Leslie over the final meters, moving into seventh place - the top finisher for the Hawks.

Alec Anderson and Chandler Klawitter met on the hockey rink, but it was on the cross country course, first as Park Elementary students racing in the South Park Classic in Hutchinson, that their friendship grew.

They, along with Isaiah Barlow, brought the Hutchinson cross country and track program back to the top of Section 2AA, winning titles in each sport in the 2013-14 school year.

Anderson and Klawitter were fourth and fifth, respectively, separated by just more than a second, in last year’s section cross country meet. They joined forces in winning the 4x800 section relay title.

They had plans to return to the St. Olaf College course for their senior years; that was until Anderson found out his family was moving to Chaska after the school year. Suddenly, the two friends who chased around each other at first for 600 meters as second and third-graders, were now chasing that goal on different teams.

“It’s been tough without him,” said Klawitter before the section meet. “(Alec) was my running partner. He was someone I could talk to about running at practice. ... We were on the same middle school cross country and track teams, and again in high school, so you become good friends. You push each other. It was a bummer to hear the news. I was definitely sad that we wouldn’t have our senior years together.”

“It was a little different. It’s hard to think about where I’d be if I was still with those guys. It was a bit weird not to be,” Anderson said about being back with his old teammates, in a different uniform.

For Anderson, the move was tough. Having burst onto the varsity scene in eighth grade, the first Tiger runner across the finish line at the 2010 Section 2AA Meet, he had a new home, but with some familiar faces.

“It was a challenge, but it helped knowing Joey (Duerr). I knew him pretty well so I was able to find out about captains’ practices and go to those, and I was able to find friends quickly. It’s been really smooth and good so far,” said Anderson.

The addition of Anderson to the Chaska line-up brought great excitement to the coaching staff and team. With another state-meet qualifier — twice in his career — the Hawks started the season ranked and the favorite in Section 2AA.

One meet in and Anderson was on the shelf with a quad injury. He returned in time to win a meet on the state meet course in Northfield, but it was the last he would run until the section meet due to a stress fracture in his femur, or his thigh bone.

“For the longest time, my thought was I wanted to help out the team and do what I could. I just really didn’t know if it was going to be good enough to run. I really didn’t run before. I went out on a warm-up and it felt okay, and I decided I was going to go for it and do my best,” Anderson said.

All along his plan was to return for sections, even if his physical therapist didn’t know.

“It was frustrating not being able to compete, but I had to stay as positive as I could and do what I could to stay in somewhat shape in the pool, without running. To have the season start so well and it looked like it was going to be a good one, it was discouraging,” Anderson added.

Even up until the final days last week, Anderson was still cautious. Not having run a race in seven weeks, he wondered how he would fare. Arriving on the Lake Marion course, miles away from where he grew up in Hutchinson, he felt good to run.

He was back home, and standing on the starting line with him was his good friend Klawitter. It didn’t matter the uniform color. They had a goal to achieve.

Klawitter fell back throughout the race, affected by the warmer-than-usual temperatures for late October, placing 31st overall.

Anderson, who said the familiarity of the course helped play a role in his success, made sure to talk with his friend post-race.

“It helped me a lot mentally that I knew every part of the course and how much of the race was left. Knowing everything made me feel better. ... I was glad I was able to run at sections and help the team go to state,” Anderson said.

“He definitely deserves to be going to state. He’s a great runner,” Klawitter said in a pre-race interview.

Three runners in the top-10, led by individual champion Joey Duerr, lifted Chaska to a 15-point victory with a score of 63.

Shakopee nabbed its first boys state qualification since 1994 with 78 points to Chanhassen’s 81.

“Certainly, I was satisfied with my finish, even a bit surprised,” Anderson said of his time. “I hadn’t ran. That was the farthest I had run since August. I was pleased with it. It helped my team go to state.”

The Class AA State Meet begins with the boys at 1 p.m. Saturday at St. Olaf College. The girls race at 2 p.m.

Chaska assistant coach Kyle Zygarlicke wrote on his personal blog about his anxiousness for the Section 2AA Meet. Despite the fact that the Hawks were one of two favorites with Marshall to advance to state, on section day it comes down to performance.

The Chaska girls team performed beautifully, scoring 70 points, nine off the pace of section champion Marshall, but well ahead by 12 of third-place Shakopee. It is the third state qualification in three years for the Hawks.

Four runners in the top-16 helped Chaska advance led by a seventh-place finish from Anna Perrill, a four-year section runner who was the first runner across the line for the Hawks as a freshman on the same Lake Marion course.

Haley Rasmussen, sixth on the Chaska team in the 2013 section meet, was 10th overall in 15:02.5 with Olivia Anderson in 11th at 15:05.5. Anderson is the younger sister of Alec, competing in her second section meet.