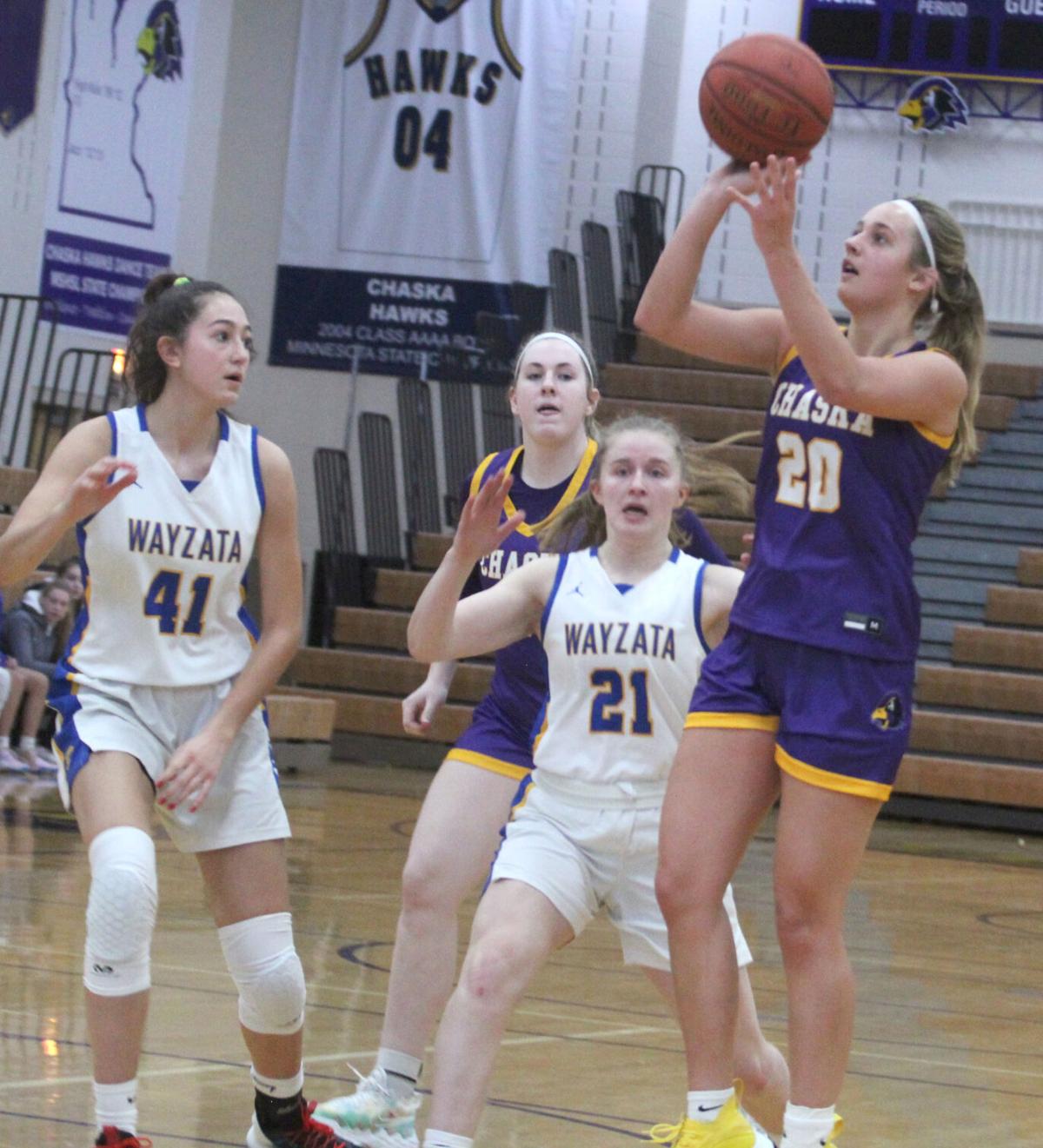 Chaska's Ashley Schuelke with the running floater, part of a season-high 14 points for the Hawks guard in a 10-point win over previously undefeated Wayzata on Dec. 14. 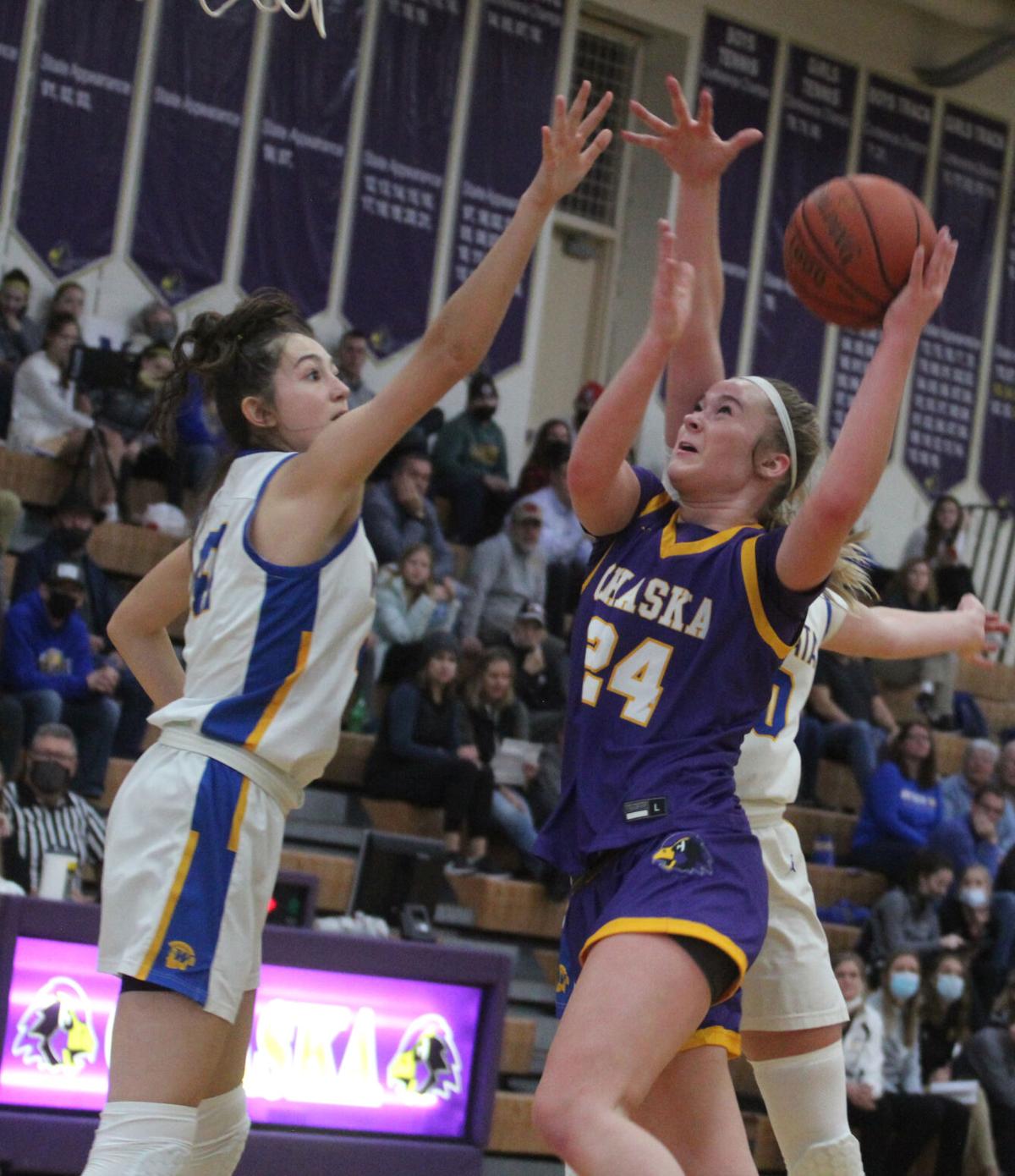 CHaska's Mallory Heyer finds two Wayzata defenders blocking her path to the hoop. Heyer had a game-high 20 points for the Hawks.

Chaska's Ashley Schuelke with the running floater, part of a season-high 14 points for the Hawks guard in a 10-point win over previously undefeated Wayzata on Dec. 14.

CHaska's Mallory Heyer finds two Wayzata defenders blocking her path to the hoop. Heyer had a game-high 20 points for the Hawks.

A first half marred by turnovers and missed lay-ups, the second half was the complete opposite.

Chaska, behind 12 second-half points from Kennedy Sanders, and a season-high 14 points from Ashley Schuelke, outscored No. 5-ranked Wayzata 32-19 in the second half in a 61-51 win on Dec. 14.

The Hawks, No. 4 in Class AAAA, 3-1 overall, held the Trojans to seven field goals in the second half. Wayzata, undefeated into the contest, was without top scorer and Minnesota Gopher commit Mara Braun, who has a torn PCL and could miss the entire season.

Schulke was 4-of-5 shooting in the second half, including a 3-pointer from the corner that spun around the rim and fell in as well as a floater from just outside the paint.

Sanders took every opportunity she could to get to the hoop, converting six baskets in the second half. Mallory Heyer finished with a game-high 20 points for Chaska with Kendall Karrmann adding eight points.

Wayzata's Brynn Senden scored 11 of her 14 points in the first half, held without a field goal over the final 18 minutes. Outside shooter Sophie Hawkinson was just 2-of-10 on 3-point shots, finishing with nine points.

Chaska plays in the She Got Game Classic at Hopkins High School on Saturday, Dec. 18, against Minnehaha Academy.

An up-and-down the court game, Chanhassen won its fourth game in five contests, getting double-digit efforts from four different players in an 80-61 home win over Waconia in Metro West Conference play on Dec. 14.

Callin Hake came close to a triple-double, finishing with 24 points on six 3-pointers with nine assists and eight rebounds for the Storm.

Macy Sweetser had a season-high 15 points with Lauren Arnold and Madi Hicks with 14 each.

Audrey Swanson scored a game-high 28 points for Waconia, which owns losses to Chaska and Chanhassen in conference play to start the season.

Chanhassen is at Robbinsdale Cooper at 7 p.m. on Friday, Dec. 17.

The Skippers outscored the Knights 40-24 in the second half.

Grace Hamdorf also added a pair of 3-pointers, as a team Minnetonka making 12 outside shots, nine in the second half. Aaliyah Crump finished with 13 points for the Skippers as well.

Tessa Johnson, after missing last season with a broken leg, is playing strong for St. Michael-Albertville, keeping the Knights in the contest with a team-high 25 points.

Minnetonka (6-0), ranked No. 2, plays Friday night at Hopkins High School in the She Got Game Classic, taking on IMG Academy from Florida.

Holy Family Catholic had three players reach the 20-point mark in a blowout win at Minneapolis North on Dec. 14, an 84-29 decision. The Fire led by 30 points at halftime.

Nicole Bowlin finished with a game-high 23 points with seven steals, five rebounds, and five assists for the Fire.

Lucy Hertel added 10 points and five assists for Holy Family Catholic, which had 25 assists and 18 steals as a team.

State contender Mayer Lutheran outscored Southwest Christian 43-15 in the first half, winning the non-conference match-up 67-45 on Dec. 14 in Chaska.

Emma Lade netted a game-high 25 points for the Crusaders, which are 6-0.

Aubrey Burkhart, who hit a buzzer-beater 3-pointer off the glass to end the first half, led the Stars with 12 points. Southwest Christian scored 30 points in the second half.

The loss snapped a three-game win streak for Southwest Christian (3-2), which is at Belle Plaine on Thursday, Dec. 16.

An eight-point deficit at halftime, despite 40 second-half points, Holy Family Catholic was unable to make up ground in a 76-66 loss to visiting Glencoe-Silver Lake on Dec. 14.

Holy Family Catholic, which had won two straight games, is now 2-3 overall into a Saturday, Dec. 18 contest with Holy Angels at 3 p.m.

A one-point lead at halftime, Southwest Christian extended its advantage to double digits, improving to 3-1 overall with a 71-61 win over Mayer Lutheran on Dec. 14.

Southwest Christian came up large in critical spots with its defense.

Abram Jopp and Conner Olson were leading scorers for the Crusaders (0-3) with 13 and 11 points.