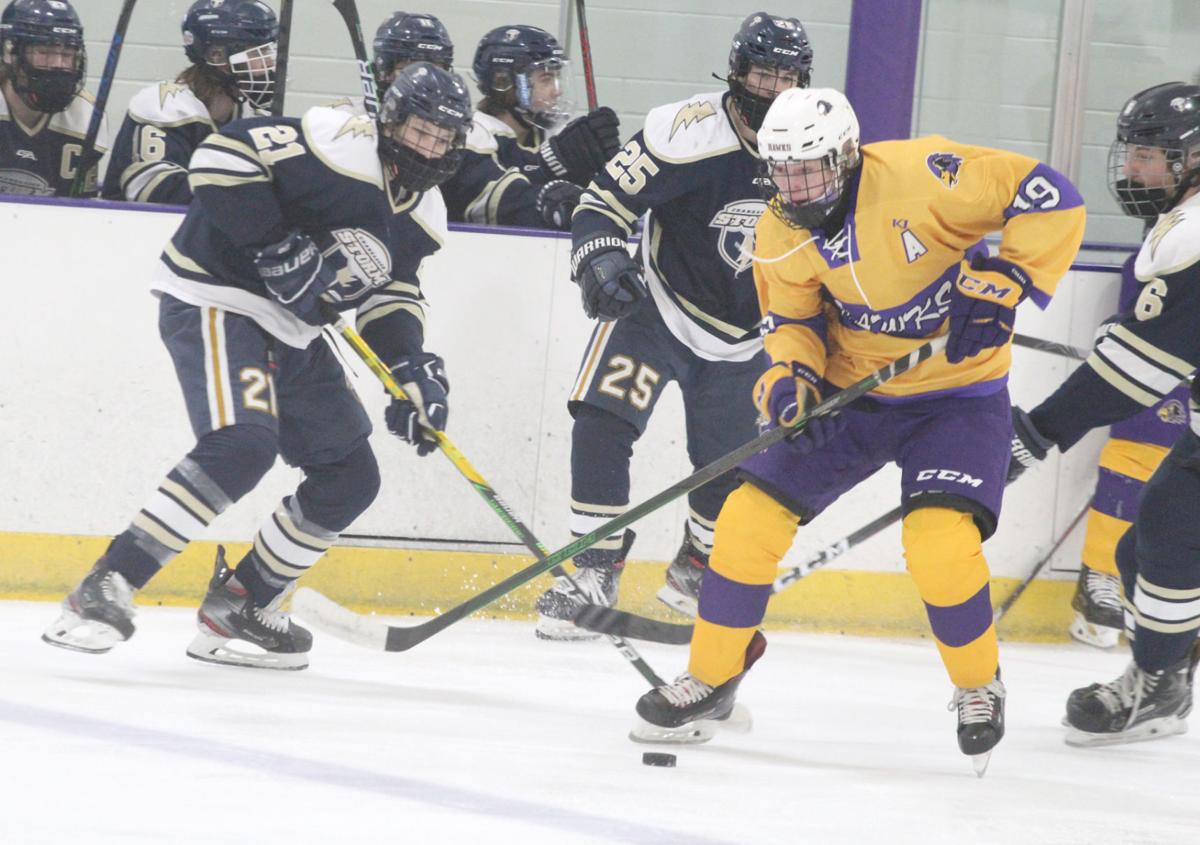 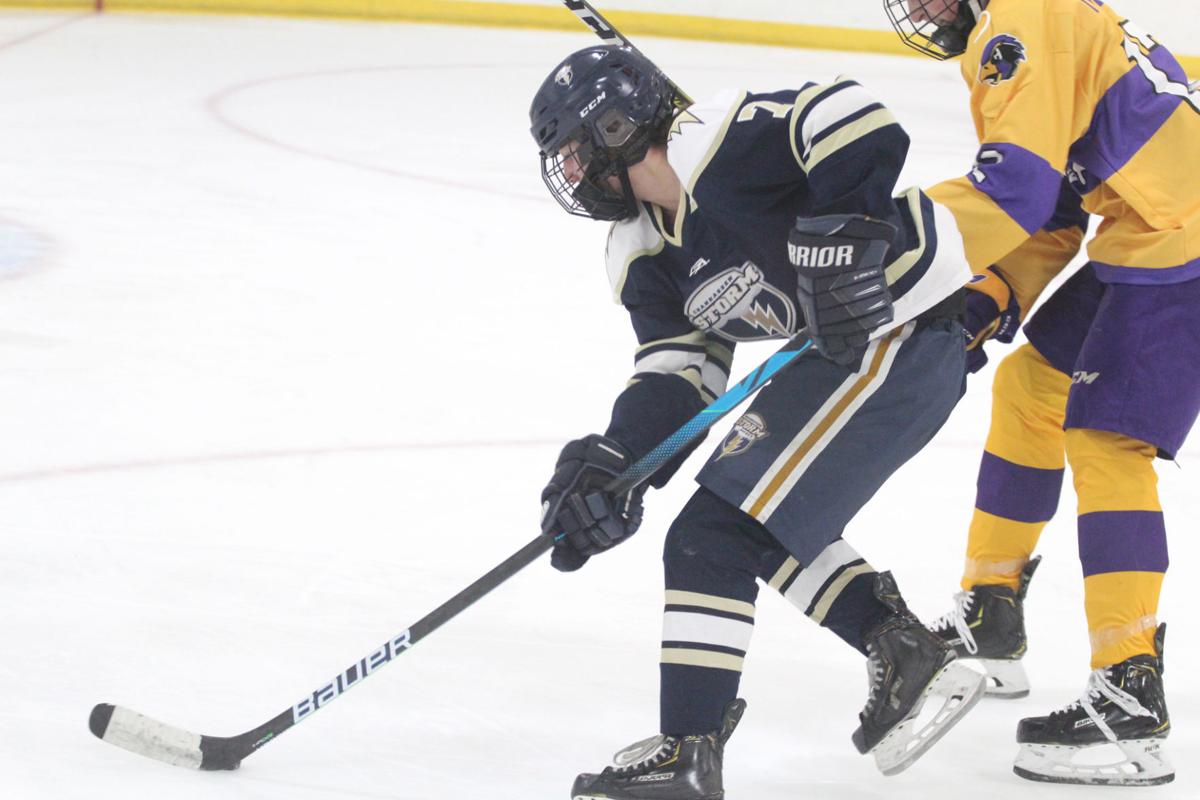 Chanhassen sophomore Joey Parker turns the corner around Chaska defenseman Luke Iverson for a scoring chance in the second period on Jan. 30. 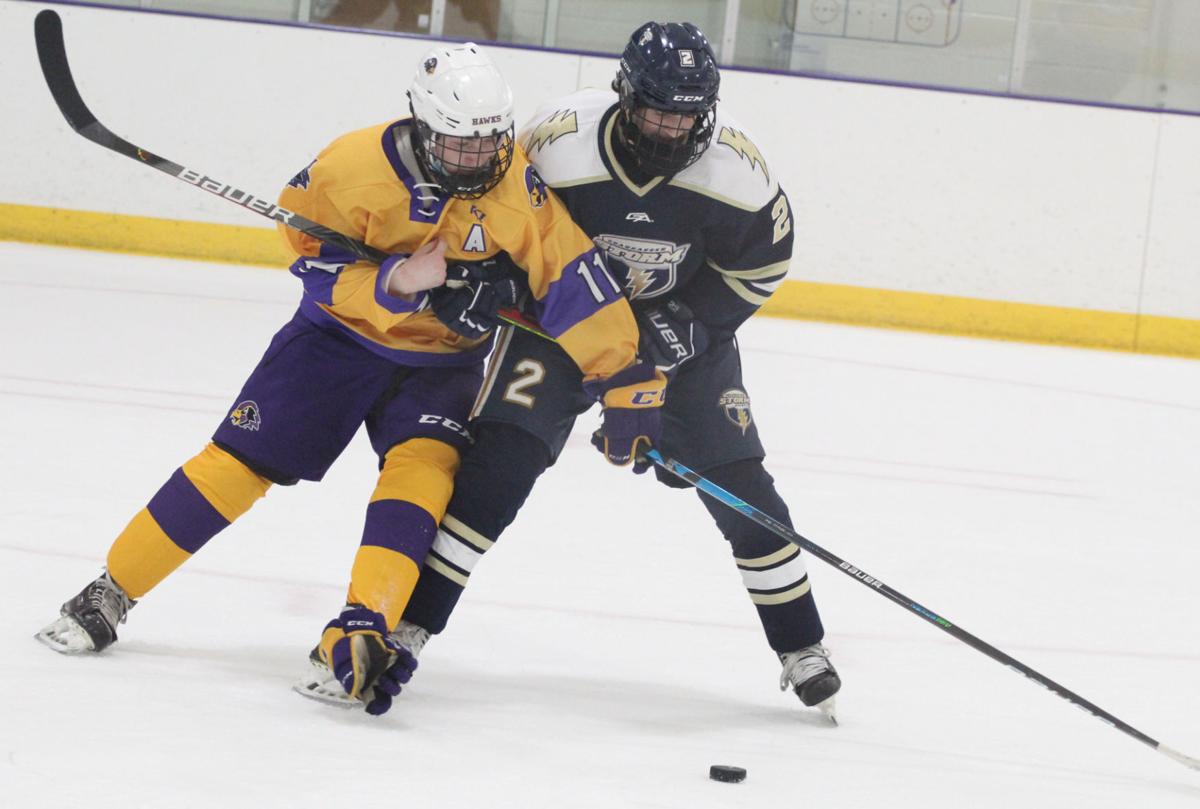 Chaska junior assistant captain Zach Seltun loses a glove as he reaches for the puck with Chanhassen freshman defenseman Billy McNeely draped over him. 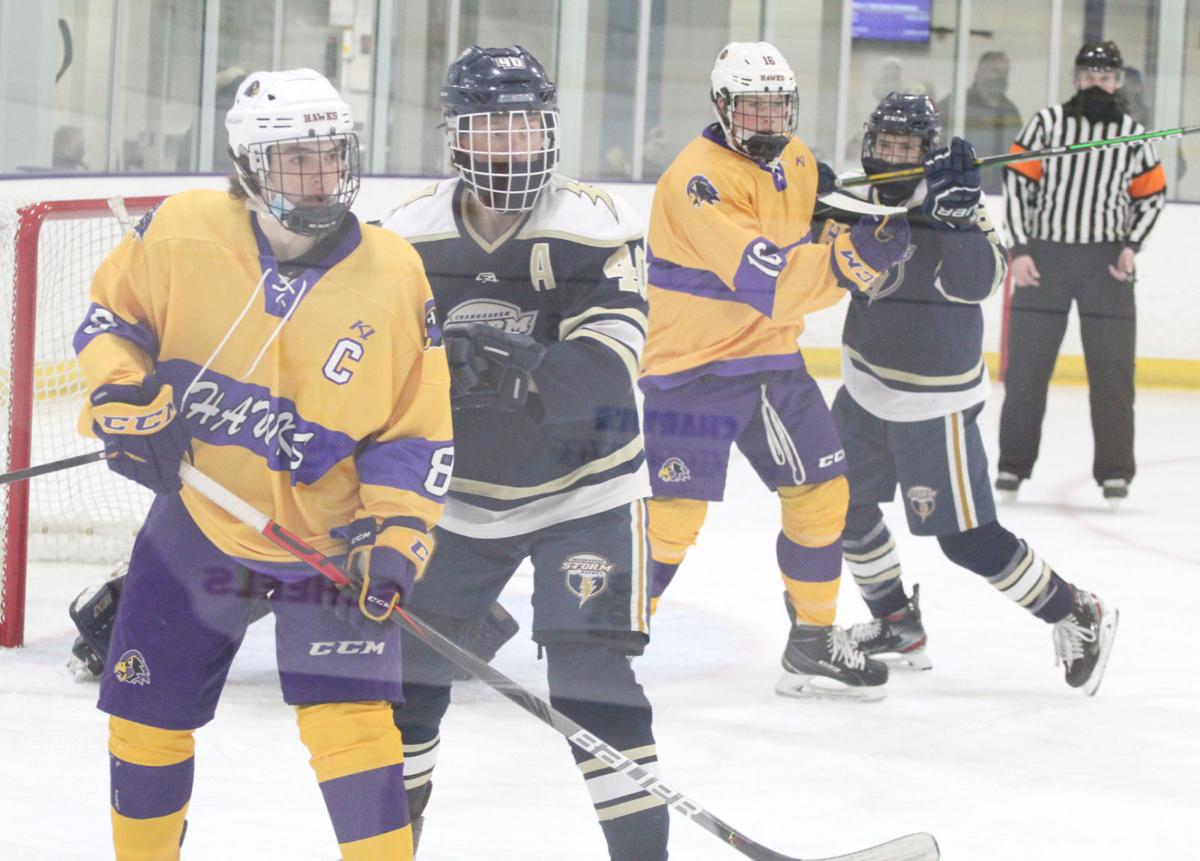 Chanhassen sophomore Joey Parker turns the corner around Chaska defenseman Luke Iverson for a scoring chance in the second period on Jan. 30.

Chaska junior assistant captain Zach Seltun loses a glove as he reaches for the puck with Chanhassen freshman defenseman Billy McNeely draped over him.

Two years later, now at Bantam AA, much of that same group met up with Osseo Maple Grove again, in the state championship. And while the result was not the same, the Storm Hawks placing second, it was clear if these players stuck together they could have a real chance on the high school team.

That chance for some began last season. Carter Wishart was the starting goaltender. Jimmy Snuggerud was the team's leading scorer. Max Burkholder and Sam Rinzel commanded the blueline as underclassmen. Seltun, Seaverson and Bennett Jax saw action at forward.

That chance for all begins this season, though Snuggerud is with the U.S. National Development Program in Ann Arbor, Michigan, and Burkholder remains in Dubuque in the United States Junior Hockey League.

Sean Gates is the back-up goaltender at Chanhassen, while Gracyn Sawchyn shifted to the Shattuck-St. Mary's program, and last year was the first-ever pick of the Red Deer Rebels in the Western Hockey League's U.S. Prospects Draft.

"Our group became very close. We played together in the summer and when winter came around it just clicked. A lot of our guys did live in Chaska, so it made sense," Seaverson, a junior captain, said.

Seltun was one of them that open-enrolled to Chaska to stay with friends. He played with Snuggerud on a line much of last season. Nick Olmscheid, a neighbor, was a teammate last season.

"A lot of the older guys like (Mike) Koster, (Blaine) Warnert, and all of them. I really wanted to be a Hawk like them," Seltun, also a captain, said.

Sophomore Joey Parker was a member of the state-qualifying CCHA Bantam AA team in 2020 with Alex Lunski. A year before, though, on the A team, he played alongside of a number of current Chanhassen teammates.

Lunski and Gavin Uhlenkamp, freshmen, helped the PeeWee AA team to state, ranked No. 1, in 2019. Billy McNeely, Henry Muench, Ben Curtis, and Jake Risch were district champions in Bantam A in 2020.

Like Chaska's group, Chanhassen's group is sticking together, looking to build the Storm into a winner.

"It definitely helps knowing guys from since childhood. When you're playing these more experienced teams that have been together for a couple of years in high school, the time we spent in youth hockey, it has helped us come together more quickly I'd say and understand the tempo of the game," Parker said.

Chaska, with nine seniors in the varsity line-up, won 16 games in 2019-20, reaching the section championship with an upset of top seed Prior Lake.

Seltun (14 goals, 16 assists) and Seaverson (three goals, two assists) are part of a group of around six players returning that played in a main rotation on that team last season.

"Honestly, watching the players last year and how they held themselves to a certain standard, and how they worked in practice, now that they are gone, that really stuck with us younger guys, and we just have to carry it on to the younger guys now on our team. If we can do that, it's going to lead to success down the road," Seaverson said.

"Our captains last year had a lot of influence on us. We're trying to do the same with our new teammates," Seltun said.

Chaska, six games into the 2021 season, is beginning to figure themselves out a bit more, evidenced in wins over Bloomington Jefferson, Bloomington Kennedy and Chanhassen. The Hawks are 4-2, playing defending state champion Hill-Murray to a 3-1 defeat.

"It's a lot different. Everyone has different roles this season. For me and Jack, our role is definitely bigger than it was last year. Bennett and Sully, too. I think we're coming along. Doing a good job handling it, and continuing to play our game," Seltun said.

Chaska, up 1-0 on Chanhassen through two periods, pulled away over the final 17 minutes on Jan. 30, getting a pair of goals from Jax. Scholle and Broten added scores, while senior Ryan Kleber opened the scoring just 46 seconds into the contest from classmate Bryce Hansen.

Dominant last 17 for Chaska (2 PP goals in final 2:00) after Chanhassen skated with them for the first two periods.

Future bright for both programs pic.twitter.com/AAm90mETtL

Chaska will see tough challenges this week, playing twice at St. Louis Park Rec Center. First in a rematch of a 3-2 defeat with the Orioles on Tuesday, Feb. 2, before a meeting with defending Metro West Conference champion Benilde-St. Margaret on Saturday afternoon.

"Our group has had a lot of success since younger ages, so now that we're on the high school team, I don't think that needs to change," Seaverson said. "Ever since squirts there's been this expectation. We went to two state tournaments as youth. Obviously the goal is to get back there two more times."

Landon Oldenkamp, one of two seniors on the Chanhassen varsity roster along with goaltender Will Anderson, is one of just eight skaters returning this season.

With just eight total goals returning from the varsity level, finding offense early on was always going to be a challenge. But the younger skaters have shown great promise. They skated with Chaska for two periods. The final score not indicative of the contest.

"It's definitely a lot faster, the kids are lot bigger," said Parker of the difference from bantams to high school varsity. "When you're used to playing with kids in your age group, or one year younger or older, to now where kids can be two or three years older, it's a big difference. But it's fun to compete against them."

Through five games, Parker, Lunski, Risch, and Lee each have two goals. Landon Oldenkamp also scored his first varsity goal in a 7-1 win over Bloomington Kennedy to open the season.

Chanhassen has found themselves with an opportunity to win others, leading 2-0 over Jefferson after one period. It was 2-2 into the third period with St. Louis Park and a 2-0 deficit with Southwest Christian/Richfield into the final 17 minutes.

"We can skate with teams it seems for two periods, and then all of those hits, it really starts to add up and we've had a hard time closing games out. I think just with every game, every practice, this team will grow up, and be able to finish off more games for wins," Oldenkamp said.

Chanhassen head coach Jessie Willis, who coached many of the current Storm players in youth with his son, Brayden, has paired Parker with Lunski and Uhlenkamp, an all-underclassmen line.

"You don't have to think about it. You just know where each other is going to be. The chemistry is definitely growing with these guys," Parker said.

"I'd like to win some games, but I also see my last season as trying to teach these guys the right way to do things. I'd enjoy coming back, watching them in the next couple of years, playing at state. That would be awesome for this program," Oldenkamp said.