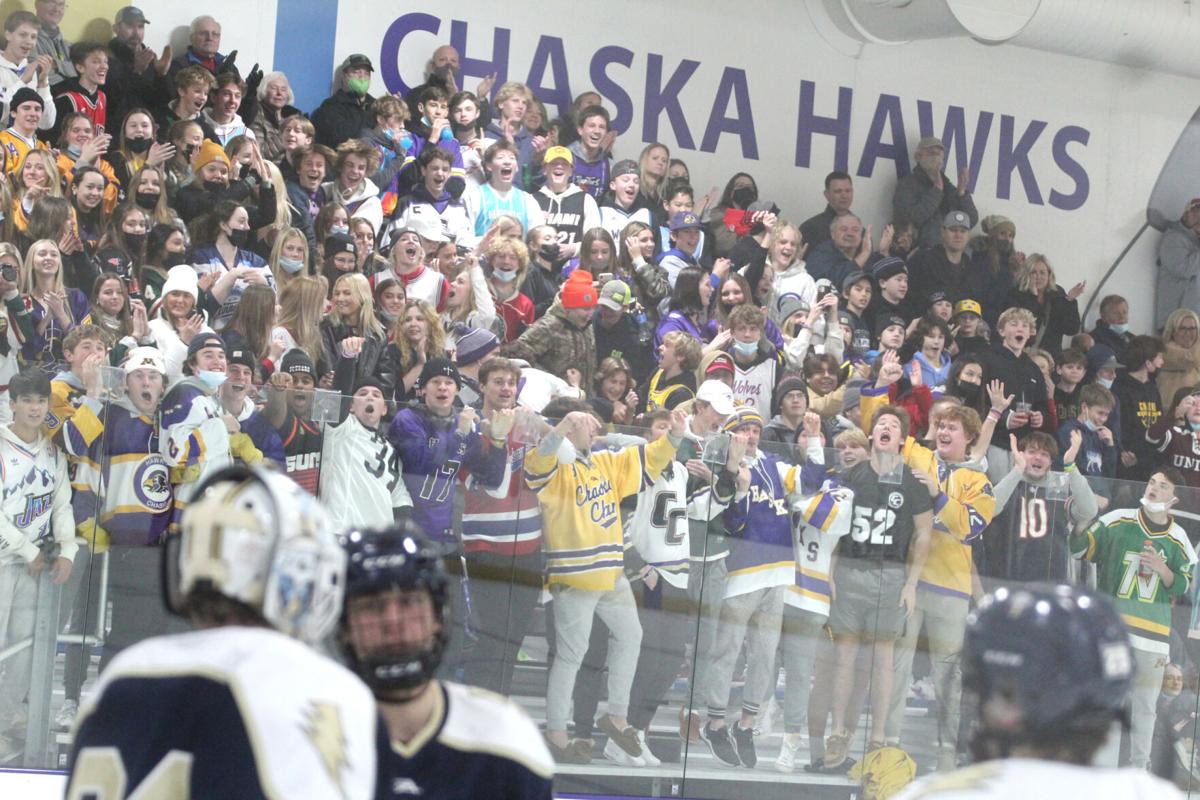 Chaska students react to a second goal in 15 seconds, the Hawks quickly extending the lead to 3-0 against Chanhassen in the middle period on Nov. 30 at Chaska Community Center. 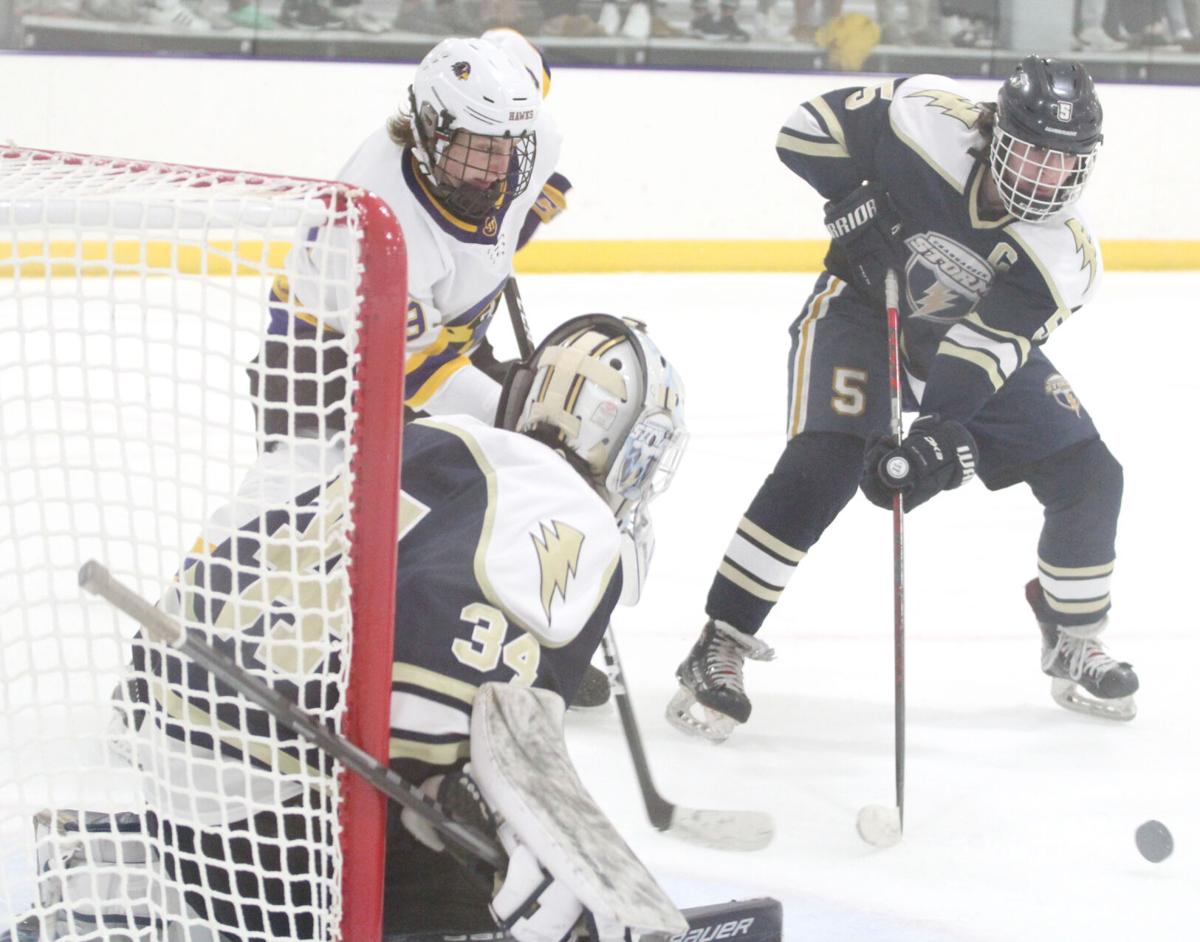 Chanhassen defenseman Joe Gerebi clears a blocked shot from out of the slot as Chaska’s Jack Seaverson looks for the puck with Storm goaltender Sean Gates ready for an attempt. 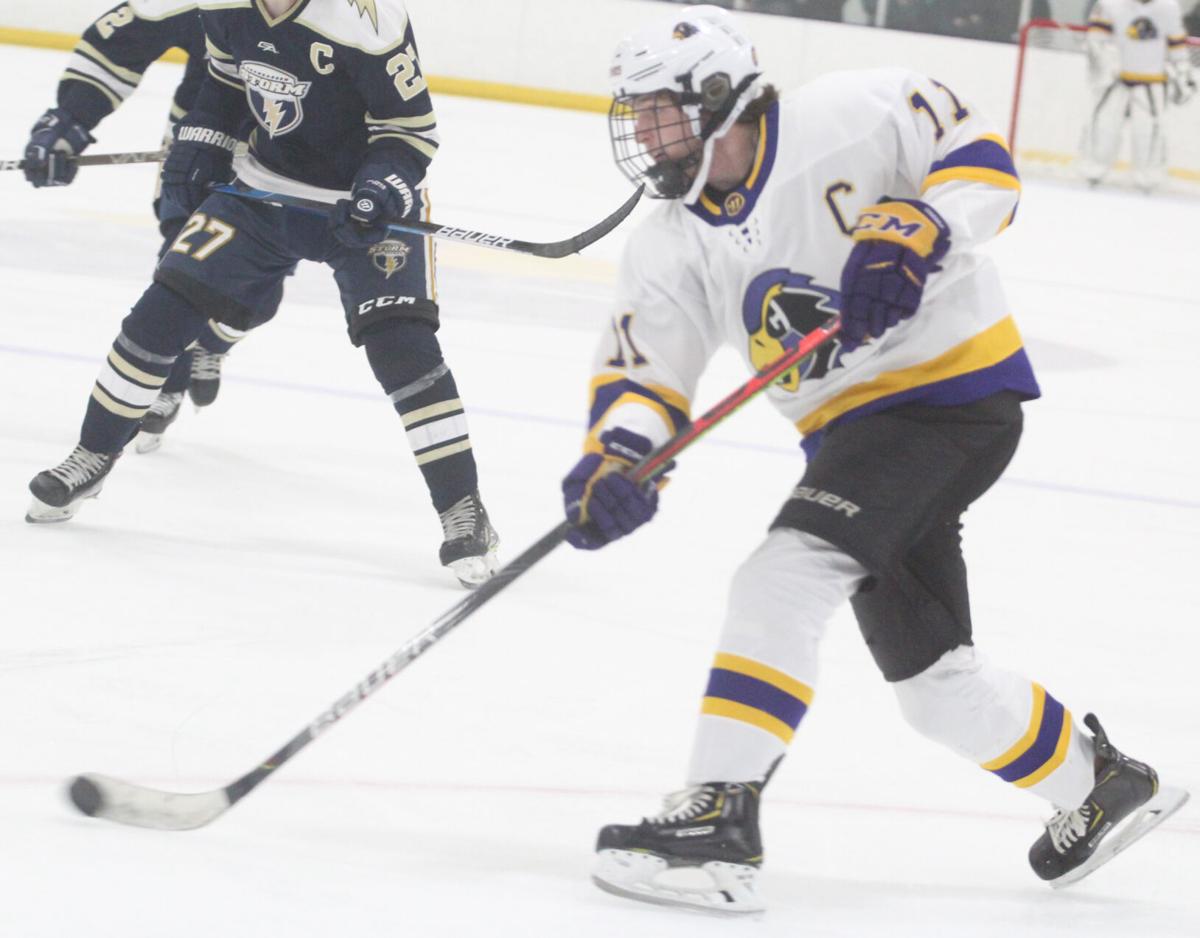 Zach Seltun scored twice in Chaska’s 3-2 win over Chanhassen on Nov. 30. In three games this season, the senior captain has three goals, matching his junior season output in 19 games. 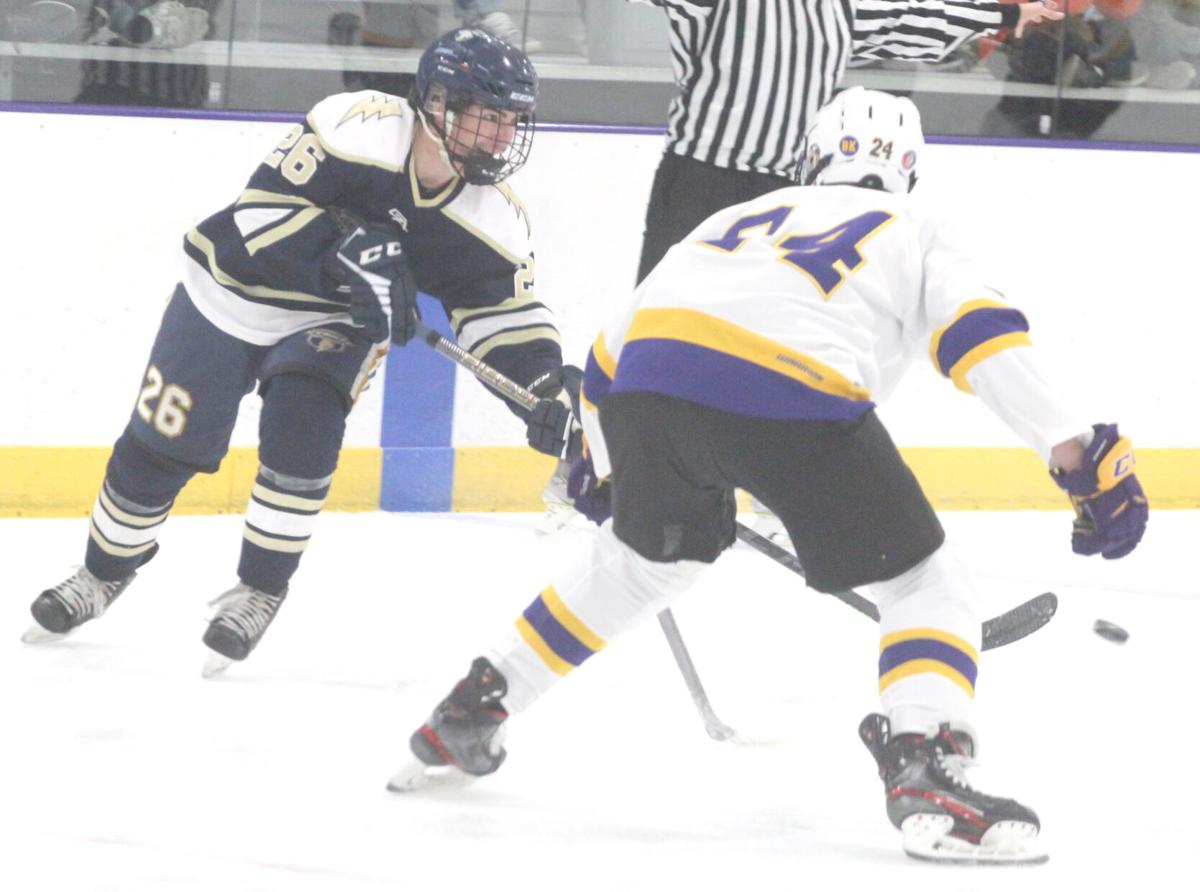 JT Montang, one of four seniors on the ice for Chanhassen, throws a saucer pass to a teammate on a 2-on-1 opportunity in the first period. 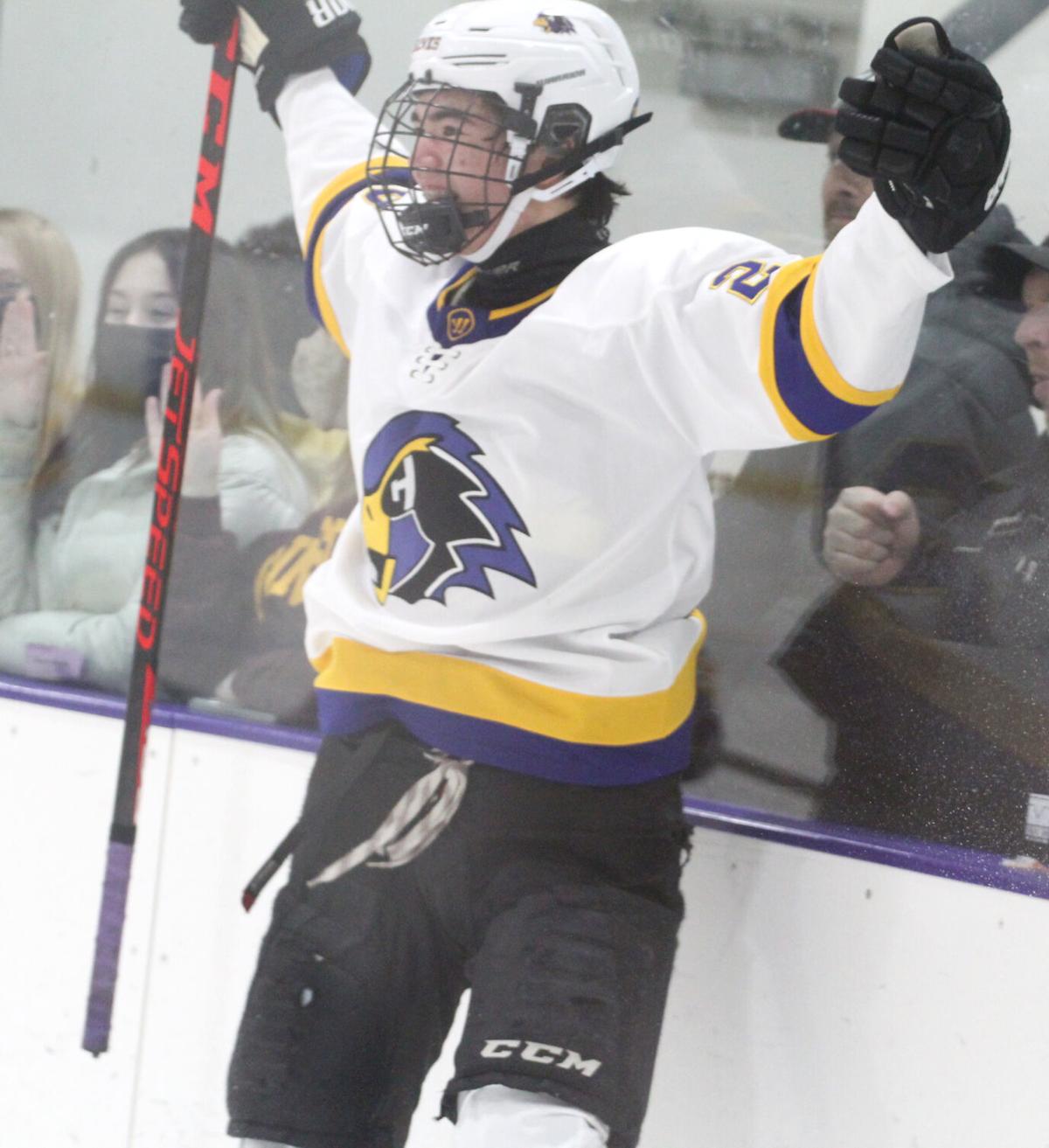 Chaska sophomore Tanner Bruender waits for teammates to celebrate with after scoring on a breakaway, giving the Hawks a 3-0 lead with his first varsity goal. 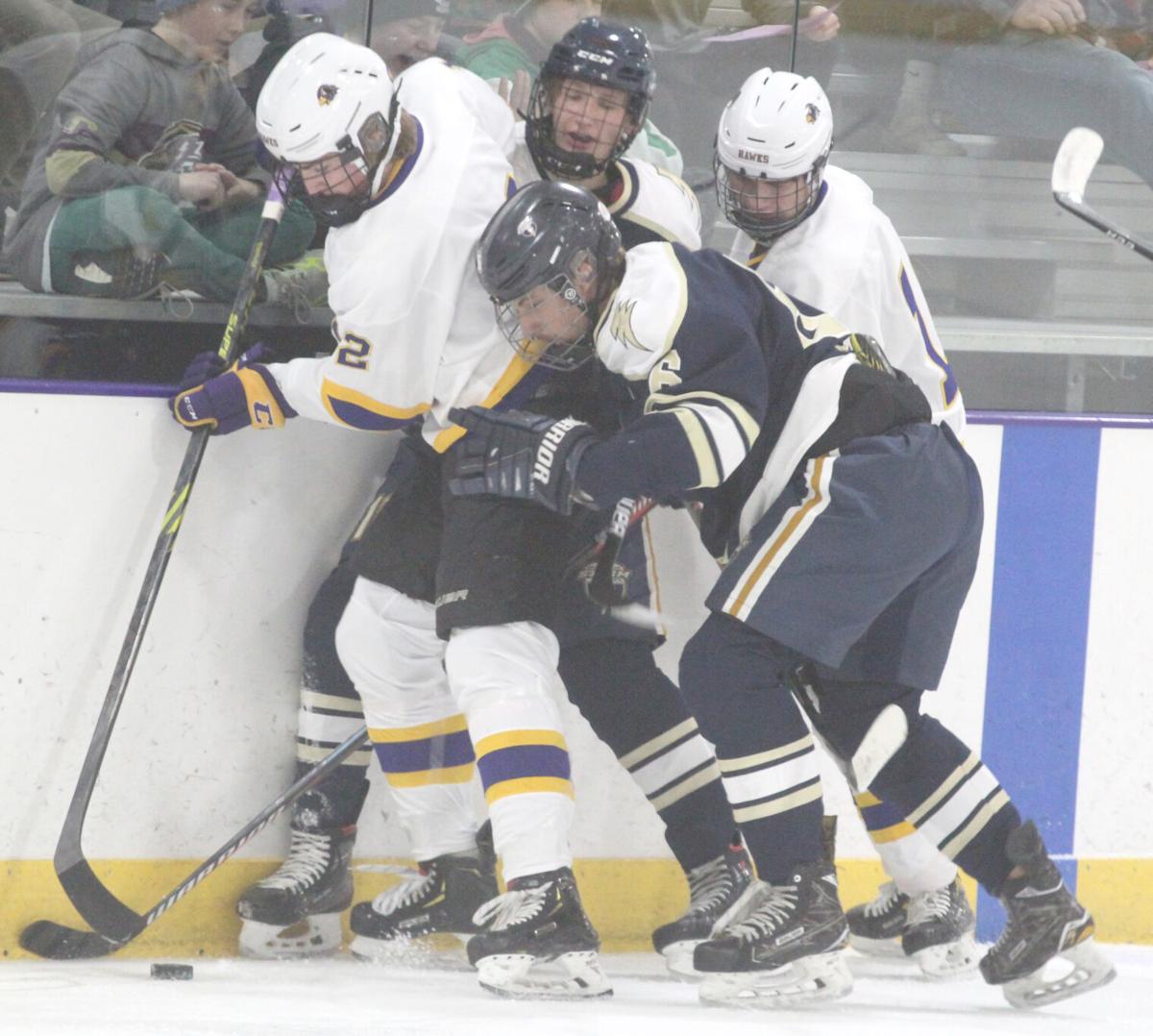 Four players, including Luke Iverson of Chaska and Tyler Hanson of Chanhassen, battle for the puck along the boards in the opening period Nov. 30 at Chaska Community Center. 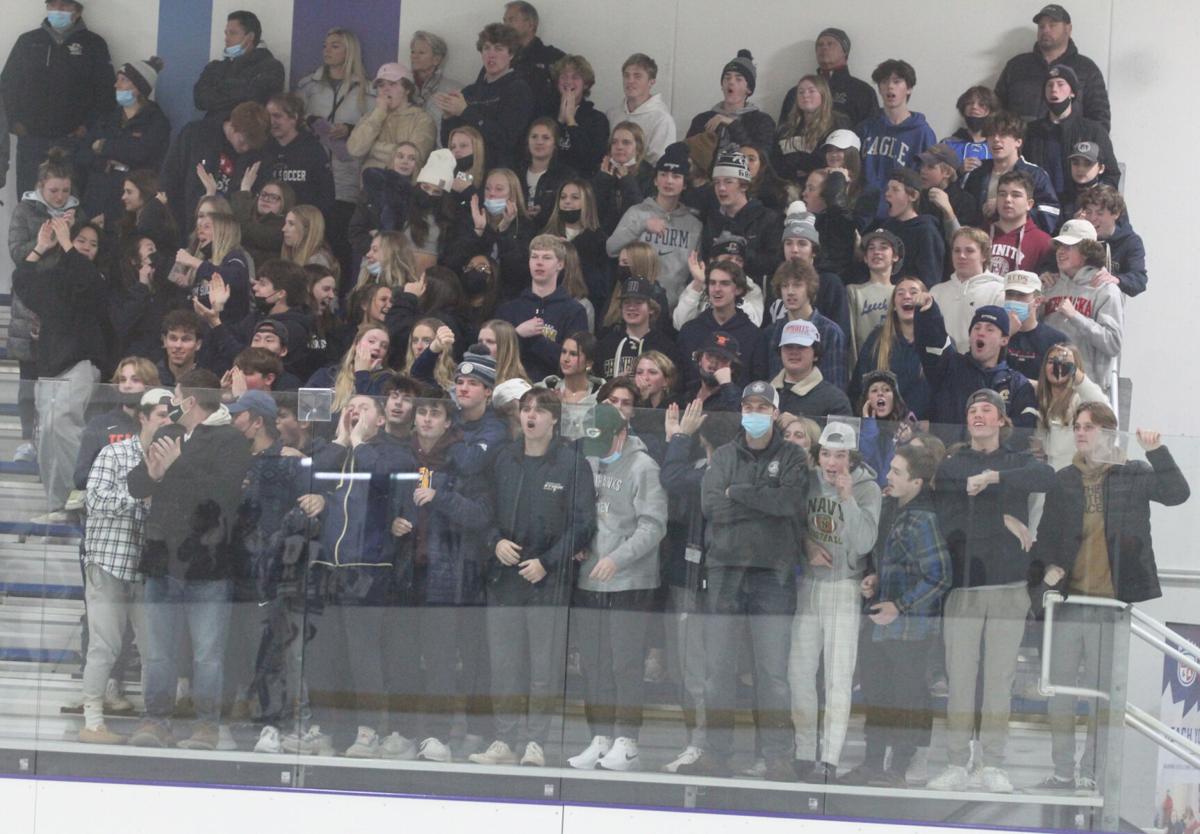 Chanhassen's student section roared at every hit, every scoring chance, and definitely back-to-back Joe Parker goals in the third period.

The Chaska-Chanhassen hockey rivalry has been lopsided of late, the Hawks winning 10 straight into the first of two meetings in the 2021-22 season. Four of the last six games ending in a shutout.

After two periods Nov. 30, Chaska leading 3-0, it looked like that trend may continue. The Storm were outplayed over the final 17 minutes a season ago in both meetings, outscored 5-0, allowing four goals in the third period in one game.

Behind a pair of Joe Parker goals on a single shift, 49 seconds apart, Chanhassen never went away. The final decision, 3-2 in favor of Chaska, was in doubt until the final horn as the Hawks had to kill off a late Storm power play.

"We're a team that is going to have to have that grit, that tenacity to get the puck, to win these type of games. We're still a young team. Last year we were young, and really that is still true. I like that we have our entire defense back. When you're playing a good team like this, you have to be really strong in your D zone," Chanhassen senior captain defenseman Joe Gerebi said.

Chaska, now 3-0 on the season, wins over top-10 St. Thomas Academy and Duluth East as well, is getting it done across three lines of skaters.

The opening weekend saw Sam Scheetz, Jack Seaverson and Sam Spehar tally six of the Hawks' seven goals. On Tuesday in the home opener at Chaska Community Center, the scoring came from the other two lines.

Zach Seltun, who two years ago was third on the team with 14 goals and 30 points as a sophomore, already match his 2021 shortened season output with his second and third goals in the win over Chanhassen.

"This is fun. Our senior class is really starting to take over, provide that great leadership for the younger kids. I'm excited for the potential this team has," Seltun said.

Seltun opened the scoring at 4:41 of the first period, a rebound goal off a Bennett Jax shot. After enjoying much success playing with Jimmy Snuggerud two years ago, Seltun is finding that complimentary play with Jax, now in year two together on a line.

"He's a good skater, can grind in the corners, so that allows me the chance to hang out up top, and be ready for a feed from him. The way he finds me, he's a great linemate to have," said Seltun of Jax.

A defining stretch of the game came midway through the second period. A Col Baker shot attempt from the point was tipped out in front, the puck finding space between Chaska goaltender Carter Wishart's pads for what looked like the tying goal.

The near official, though, waved off the goal, ruling the puck was played with a high stick.

In a blink of an eye it felt, it went from potentially a 1-1 game to 3-0 in favor of Chaska. Two Hawk goals, separated by just 15 seconds, had the arena buzzing. A standing-room capacity crowd that surrounded just about every inch of the glass.

"Having a packed crowd really made it fun. It felt like more normal like my sophomore year. It made for an amazing atmosphere tonight," Seltun said.

Seltun tucked his second goal of the game between the pipe and Chanhassen goaltender Zach Seltun for the 2-0 lead before sophomore Tanner Bruender was sprung on a breakaway on a pass from Timmy LeRoy for the three-goal lead.

The Storm were shell-shocked.

"I think the timeout Coach (Sean) Bloomfield called saved us. An expert move by him in my opinion. It allowed us to reset, get our minds back on track. When you think you've tied it, and then the other team scores boom-boom, it messes with you. Even if you don't try to let it. Having that quick minute to take a breath, regroup, was huge," Gerebi said.

Chanhassen, a young squad with just two seniors last season, still remains young. Seven sophomores hit the ice in the season opener compared to just four seniors. Like Gerebi, now in his fourth varsity year, added growth and maturity has taken his and his teammates' game a step forward each season.

That was evident throughout, but most noticeably in the third period where Chanhassen had the better of play, Chaska clinging to a one-goal advantage after Parker redirected a Tyler Hanson shot past Wishart and then on the same shift buried a rebound on a Hanson attempt.

"We had an excellent third period. There's no other way to put it. Even the first half of the second period I thought we were the better team. If you can hold on in the first period, play strong the second and third periods you're going to win a lot of games. I think that really shined through today and I hope it continues," Gerebi said.

While Wishart has started all but two games for Chaska over the last two-plus seasons, Gates was making his fourth career start.

The Storm senior made 10 saves in the third period, including a breakaway stop, to keep Chanhassen within striking distance.

"Gates played really well the entire game. He made some amazing saves. They had a lot of tips, redirections, and he did a great job of limiting bad rebounds. He really stuck in there in the third period, gave us a chance to get back into it," Gerebi said.

When Sean Bloomfield received the Metro West Conference schedule, seeing Chanhassen and Chaska in an early-season meeting, the then co-head coach of the Hawks went out and added two post-Thanksgiving games.

When he was named head coach of Chanhassen, the schedule already complete, the District 112 rivalry was once again the season opener.

Bloomfield's debut with the Storm was in the community center arena he helped build Chaska into a perennial winner with Dave Snuggerud and staff. This time he was on the road team bench, and in the visiting locker room.

Bloomfield, after the game, was encouraged by what he saw. The compete level from the Chanhassen squad. He said the Storm were eager for a second chance with Chaska later this season on a Saturday evening in January.

Chaska is off until Tuesday, Dec. 7, a road game with Bloomington Kennedy at the Bloomington Ice Garden, an arena the Hawks are already 2-0 on the season.

Chanhassen is next up on Saturday, Dec. 4, against pre-season top-5 ranked Prior Lake in the home opener at 7 p.m. in Victoria.