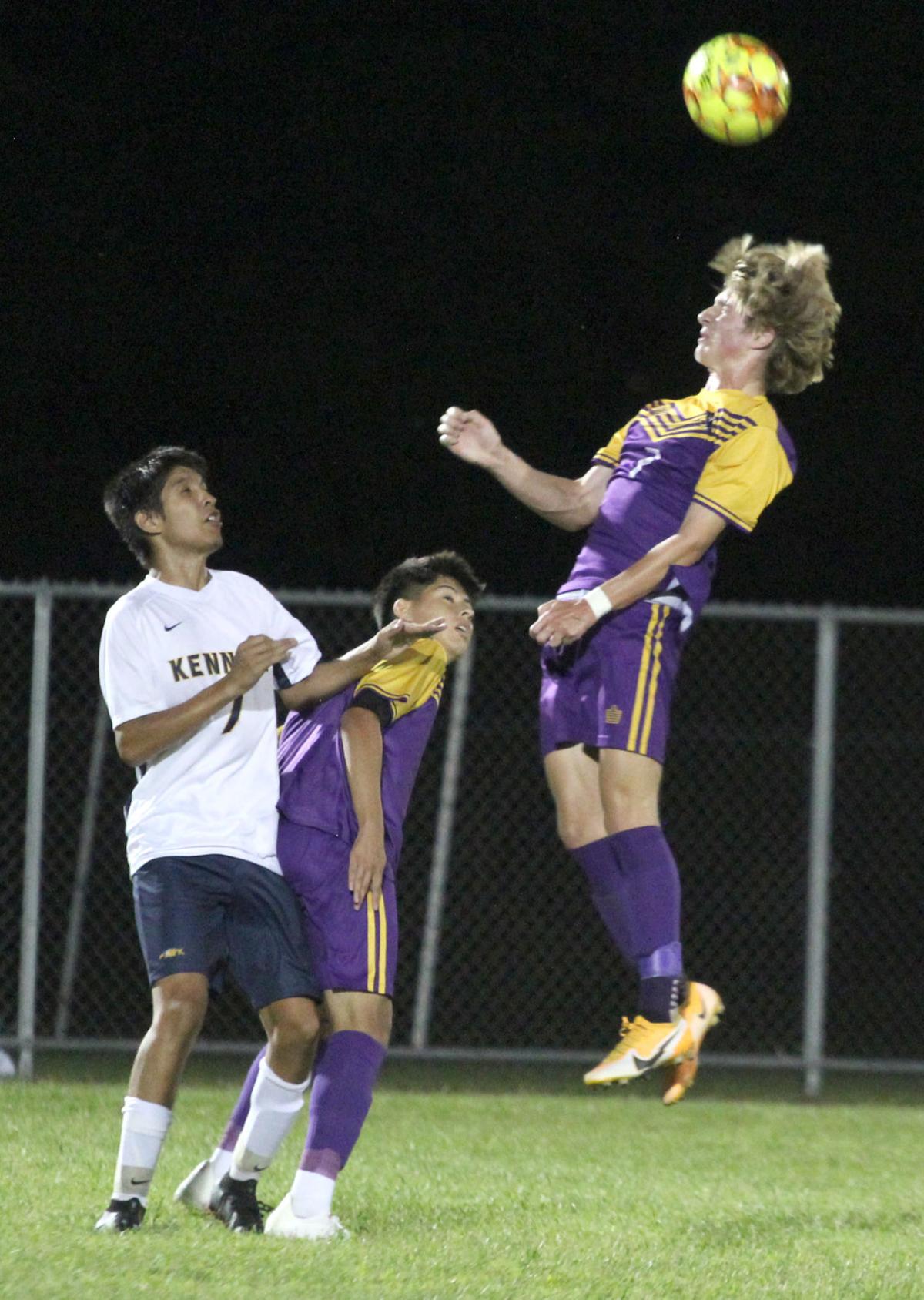 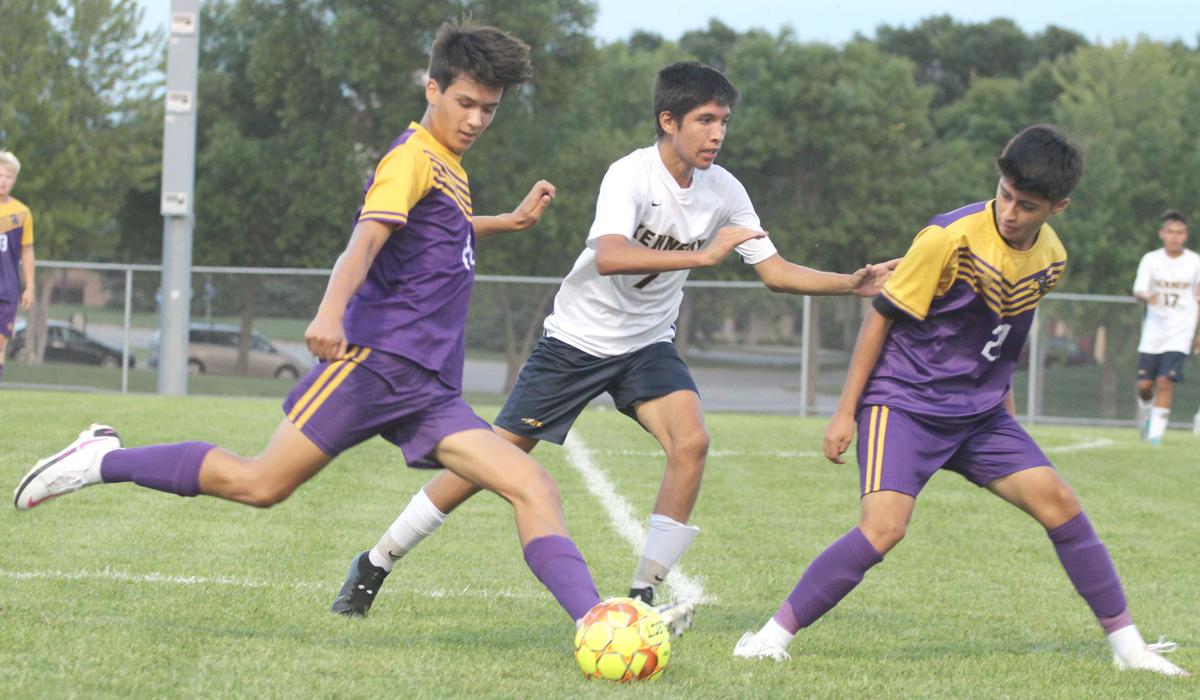 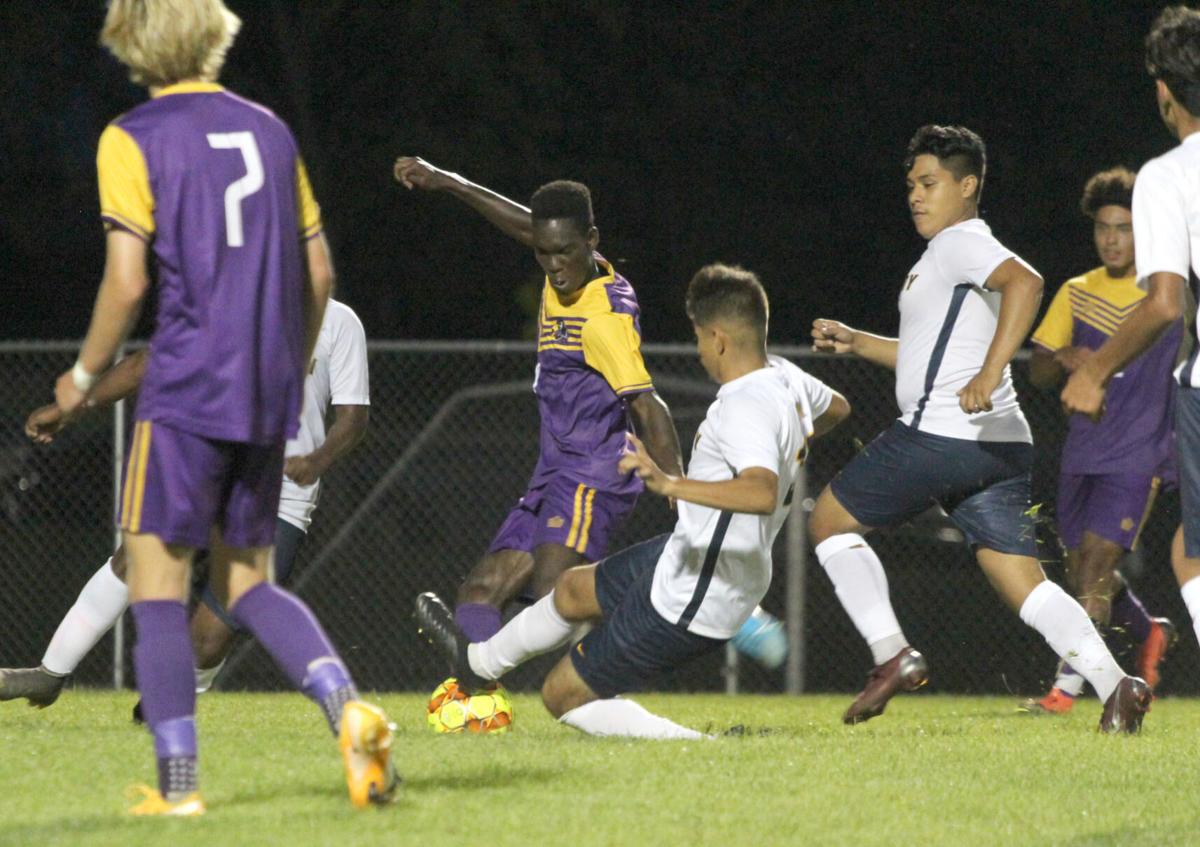 Danny Zewou's shot in the penalty box is thwarted by a Bloomington Kennedy defender in the second half of Chaska's 3-2 win on Aug. 28.

Danny Zewou's shot in the penalty box is thwarted by a Bloomington Kennedy defender in the second half of Chaska's 3-2 win on Aug. 28.

With 12 seniors on the roster, the expectations are high this season for the Chaska boys soccer team. They want to contend in the Metro West Conference.

Opening with Bloomington Kennedy and Bloomington Jefferson, the Hawks will learn quickly where they stack up against traditional top-half programs in the league.

One game in, Chaska showed they'll score with the best of them.

Ethan Ducklow netted a pair of goals, aiding in the scoring of a third, in a 3-2 win over Kennedy in the season opener Aug. 27.

Ducklow's second tally, with 16 minutes remaining, proved to be the game-winner at 3-1.

A one-goal lead at halftime, Chaska quickly doubled the advantage, Danny Zewou finishing a header pass to the front of the box from David Garcia. Ducklow started the 42nd minute goal on a corner kick to the back post.

Our @ChaskaBoySoccer takes a 2-0 lead early in 2nd half, Danny Zewou knocks in a header from David Garcia off corner ball from Ethan Ducklow. pic.twitter.com/XV19MRc38C

Ducklow found space in the box in the 26th minute, taking a pass from Zewou, spinning and shooting into the net at 1-0.

Bloomington Kennedy drew within 2-1 in the 50th minute on an Omar Artola goal off a corner kick.

Chaska returns to the home field at 1 p.m. on Saturday versus Bloomington Jefferson.

Jon Brain scored a team-high 14 goals in a 12-win season for Southwest Christian in 2019. The junior midfielder started the 2020 season right where he left off.

Brain netted four goals, leading the Stars to a 6-1 road win at Providence Academy in Plymouth on Aug. 27.

Southwest Christian opened the scoring off a free kick from Jackson Olimb, the ball finding the head of Cam Mellema.

Olimb to Cam Mellema for the goal.

Tallies from Brain on a free kick, Jack Boike off a corner from Jake Bettin, and Brain on a header gave the Stars a 4-0 lead at halftime.

Brain for the header to bring to put the Stars up 4-0 at half. pic.twitter.com/IYmaivRAyG

Minnetonka and Buffalo were scoreless 35 minutes into the season opener Aug. 27. Five minutes later at halftime, it was 3-0 Skippers.

Minnetonka got four goals from returning leading scorer Dylan Olson in a 7-0 win over the Bison. Olson's second score came on a penalty kick with 1:40 remaining.

Hunter Kemnitz in the first half, Torin Firehammer and Parker Flynn also netted tallies for the Skippers.

Aaron Dodge, Mason Drazan and Ben Giles all scored in the second half for the Storm.

Christian Lange opening the scoring for Chanhassen with a penalty kick goal.

The Storm host Bloomington Kennedy at 1 p.m. on Saturday, Aug. 29.