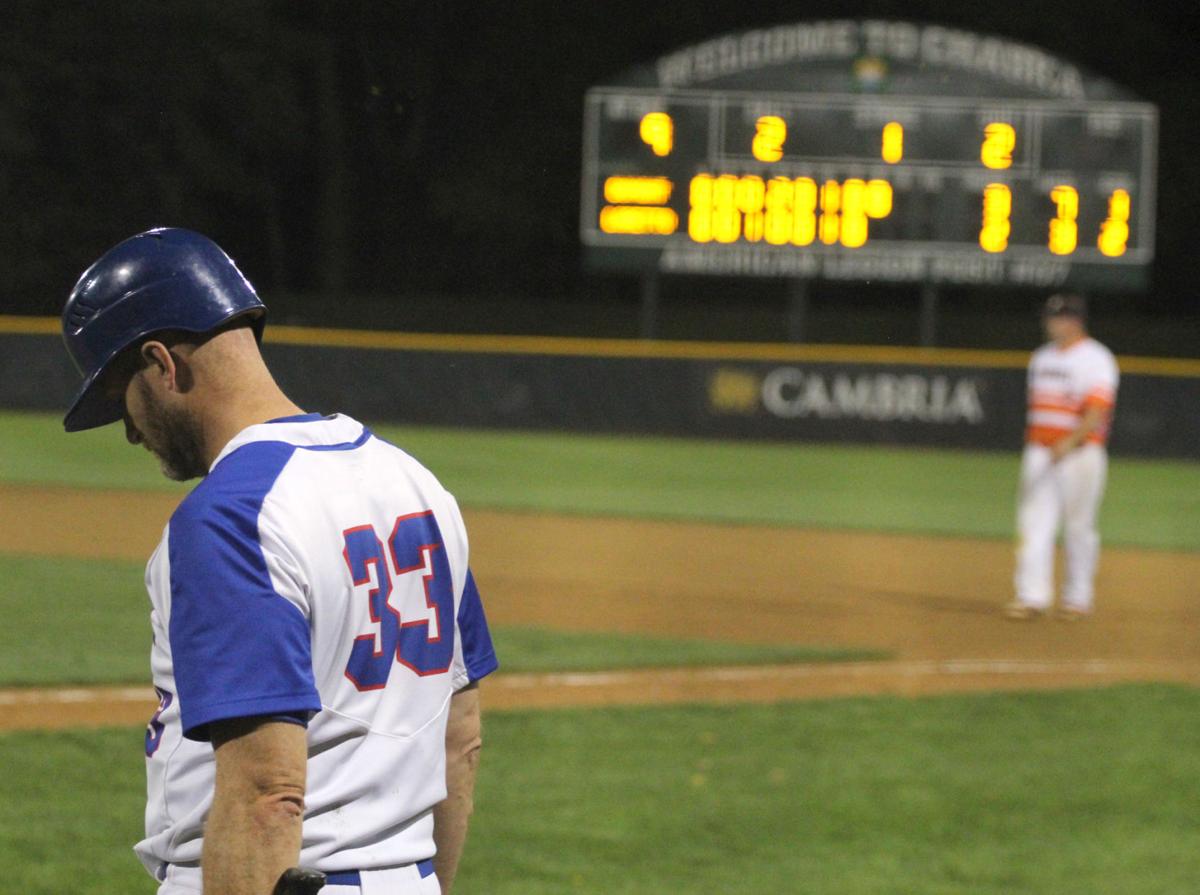 At the age of 48, Corey Koskie, former Minnesota Twins third baseman, came back to baseball, suiting up for the Loretto Larks with sons Bradley and Joshua. “These guys take it seriously. This isn’t beer league baseball. Guys take it really seriously and they compete,” Koskie told Kip Kovar of the Herald Journal. Koskie, pictured in the eighth inning on Aug. 27, Loretto down 3-2 at the time. 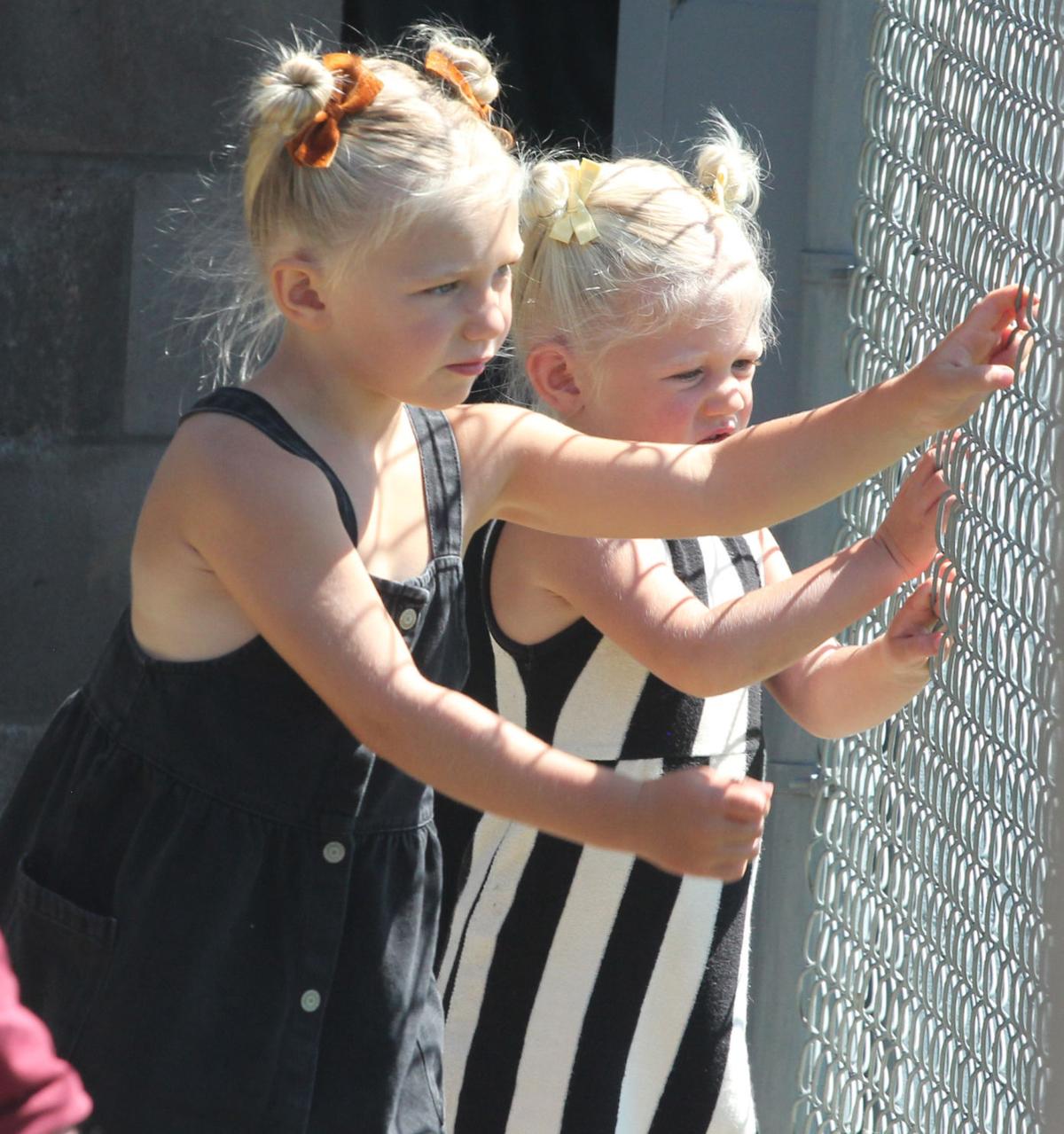 Hadley and Teigan Straka wind their arms in circles, a before the inning starts ritual with their dad, John Straka of the Chanhassen Red Birds, during an Aug. 29 state tournament game in Hamburg. 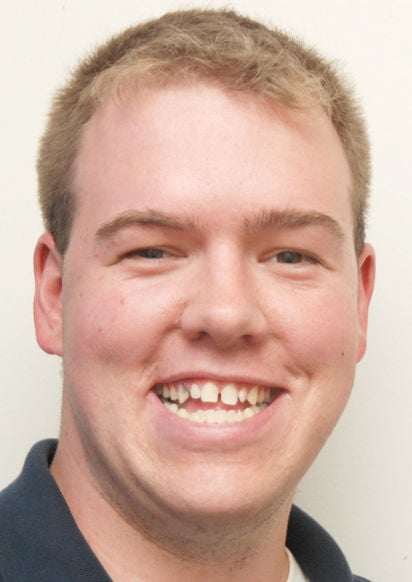 At the age of 48, Corey Koskie, former Minnesota Twins third baseman, came back to baseball, suiting up for the Loretto Larks with sons Bradley and Joshua. “These guys take it seriously. This isn’t beer league baseball. Guys take it really seriously and they compete,” Koskie told Kip Kovar of the Herald Journal. Koskie, pictured in the eighth inning on Aug. 27, Loretto down 3-2 at the time.

Hadley and Teigan Straka wind their arms in circles, a before the inning starts ritual with their dad, John Straka of the Chanhassen Red Birds, during an Aug. 29 state tournament game in Hamburg.

Sunday, Aug. 29, 2021, had just about everything great about town team baseball in Minnesota. Eighty-two degrees and blue skies.

If you're like me, there's nothing like a low-scoring pitcher's duel. As a former pitcher now -- 25 years ago thanks to a torn rotator cuff -- pitching was a game within itself. Remembering the sequence of pitches that were thrown for each batter.

What pitch to throw to get a batter out.

Chanhassen's John Straka and Rochester's Matt Meyer, two guys that pitched up through the minor leagues and ended their professional careers with the St. Paul Saints, showed everyone at Hawk Park in Hamburg how to be a pitcher.

Lead-off hit? No problem. Just bare down and get the next three batters.

Need a strikeout? No problem. Make the batter hit my pitches.

Chanhassen had three hits off Meyer the first time through the order. Over the next six innings they had just three hits total.

Rochester had nine singles and two doubles off Straka. They seemed to have a base runner or two on every inning. Multiple times relief pitchers went to the bullpen. Every time they returned to find Straka having worked out of a jam.

Straka, a pitching instructor at HTP Academy, had the same demenor whether there were runners on first and second and no outs, or if the bases were loaded. Trust in your stuff, trust in your defense, make pitches.

Straka could often times be found chatting in between innings on the bench with Ben Livorsi, a collegiate catcher at Minnesota State University-Mankato, during the 2020 summer. Livorsi soaking in everything Straka had to tell them.

With Livorsi spending the summer playing in the Northwoods League, returning just in time for the state tournament with the Chanhassen Red Birds, the chemistry picked up right where it left off.

Straka and Livorsi were on the same page against Rochester.

First-pitch curve. High fastball for a swinging strike three. Inside, outside.

The result was familiar; a Straka win, his seventh in eight state starts between 2019 and 2021. A total 20 strikeouts, one earned run allowed, in 16 innings of work in two state wins this year.

The thing is, Meyer was just as tough. The last six innings, Chanhassen had just one runner reach third base. The 35-year-old lefty did everything he could to give Rochester a chance to win.

To me, that's the best baseball.

Sunday was spectacular for many reasons. It's the off-the-field stuff like Hadley and Teigan Straka warming up their arms every inning with their dad that gets me.

John starts with windmills. Hadley, 4, and Teigan, 2, follow suit behind the fence. Then it's wrist snaps. The two girls snap right back. Warm-up pitches weren't to commence until the pitcher's lucky ladies had passed on their charm.

John waving to his daughters. Teigan in return saying "that's my daddy."

Or the scene behind the third-base bleachers at Athletic Park, minutes after the Carver Black Sox were eliminated by the Bluffton Braves. The realization of careers coming to a close.

Carver, after a 33-year hiatus from the state tournament, have now been there five years in a row. The Black Sox have reached the third weekend twice, winning a total of five games.

The heart and soul of this team were guys like Bryce Tuma, Mark Ulrich, David Dolan, and Adam Fredericks. Former Minnetonka teammates looking for a place to play. A former coach of theirs, Brian Tichy, coming along for the ride.

Tichy, a second father according to Tuma, stepped over equipment bags to put his arm around No. 8 -- allergens were horrible around 4:30 p.m. in the Athletic Park area -- telling the team there was no greater teammate than Tuma. A guy Tichy said he'd never coach a team without.

After spending my 39th birthday in Milroy covering Carver defeat Delano, there's no place I would have rather been on my 40th Sunday, at Athletic Park, among friends.

That's what town team baseball is all about. Camaraderie. Hanging with the guys after the game in the parking lot. Diving for a ball and getting dirty. Legging out a double and feeling it for days to come. Being there for one another, enjoying a game we all love so much.

In late 2020, Chaska, Waconia and Hamburg well on their way to preparing for the 2021 Minnesota State Amateur Baseball Tournament, I threw out an attendance number goal.

After 17,349 fans attended the 2018 state tournament in Shakopee, New Prague and Jordan, and more than 16,000 in Delano, Maple Lake and Dassel, even restricted attendance and COVID couldn't slow down momentum in 2020, 14,349 fans driving to Springfield and Milroy for Class C, and Shakopee for Class B.

With larger population areas in Chaska and Waconia, and a tradition-rich baseball area in Carver and Scott counties within 30 minutes, the 2021 tournament was ripe for a record-setting attendance.

Chaska, after lagging behind through the first three days with 1,795 fans, had the largest weekend yet, drawing 2,735 fans in the second weekend. Waconia has had two solid weekends with 2,302 and 2,396 fans.

Find a game and attend this weekend. Yeah, you!

Five dollars on Friday will you get into Hamburg for the top two teams in Class B in Chanhassen and Miesville, who have combined for the last five state titles.

It will also get you into Chaska for one of the tournament favorites Waconia against Luxemburg. Over in Waconia two of the tournament's premier pitchers, Jake Dykhoff of Bluffton and David Deminsky of Sartell, will square off.

Ten dollars will get you up to four games on Saturday.

St. Martin and Watkins open up Athletic Park at 11 a.m. with Maple Lake and Alexandria up second at 1:30 p.m. The game of the third round, 2020 runner-up St. Patrick and local favorite Young America hit the field around 4:30 p.m. in a game that could reach 1,000-plus fans.

Athletic Park has a full slate of games on Sunday with quarterfinals and a semifinal before the Class B championship under the stars after 7:30 p.m.

Come and experience what town team baseball is all about! You'll be a fan for life!

Sure, the baseball is fantastic, but the secondary draw is certainly trying out the different foods at every park. While I still have some work to do this weekend, I give you my preliminary rankings:

1. Big Pig Burger -- Hamburg. On a scale of 1 to 10, this cheeseburger with fried onions (optional) and topped with pulled pork is a 12. Waconia has their version, the Naughty Burger, but what set this apart was the local mouth-watering burger meat.

2. Squeaky Cow -- onion rings and cheese curds in Chaska. If you're a Crow River Valley League fan, or have ever been to The Shack at Cologne's Fritz Field, no doubt you've had Craig Pexa's award-winning cheese curds. Why are they the best? The batter. So light, so consistent. It's why the onion rings from the food truck at Athletic Park were just top-notch. If you do go curds, ask for the delicious dipping sauce for a little kick.

3. Naughty Burger -- Waconia. It felt like a meal within itself. And then I ordered fries to make it a basket.

4. Athletic Park burger -- Chaska. Maybe it's the flat-iron grill, maybe it's the fried onions on top of a beautiful patty from Heger Dairy. It's the burger I keep coming back to time in and time again.