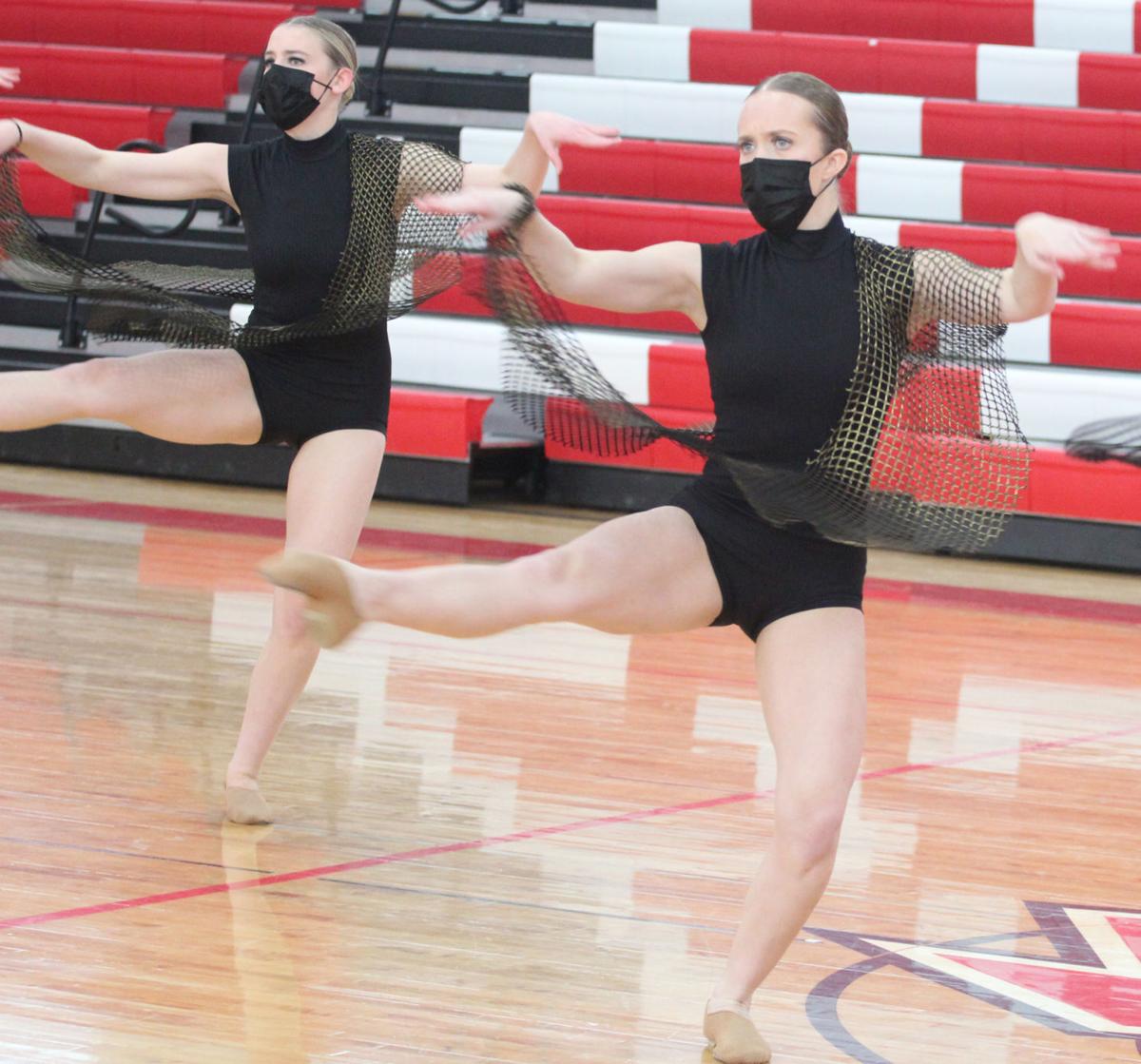 Chaska captains Sophie Fronius and Madison Daly with a turn during a varsity jazz performance at the Metro West Conference Championships Feb. 6 at Benilde-St. Margaret. The Hawks were crowded champs in both jazz and kick. 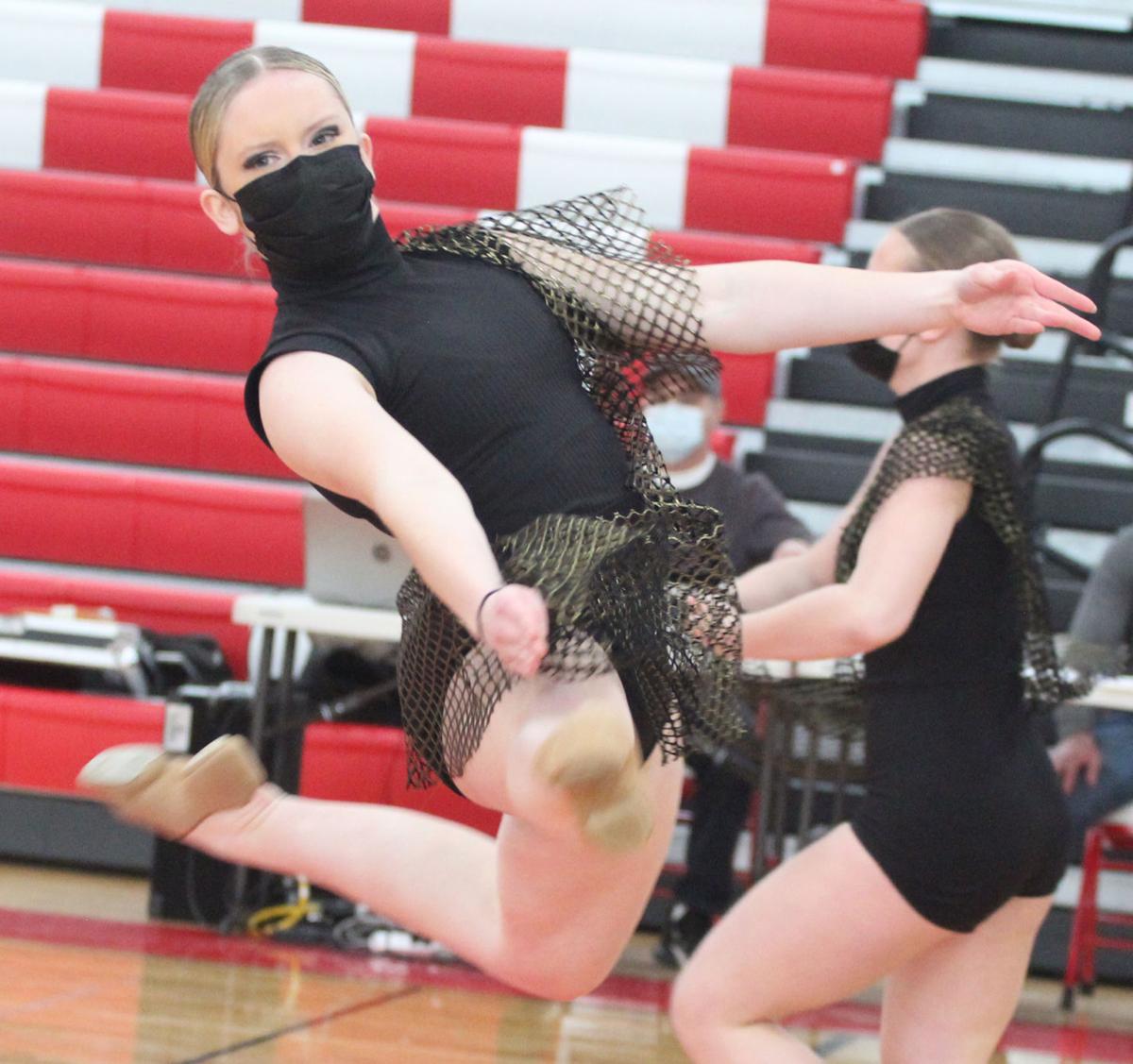 Freshman Addison Heroux soars through the air for Chaska varsity jazz at the Metro West Conference Championships on Feb. 6. 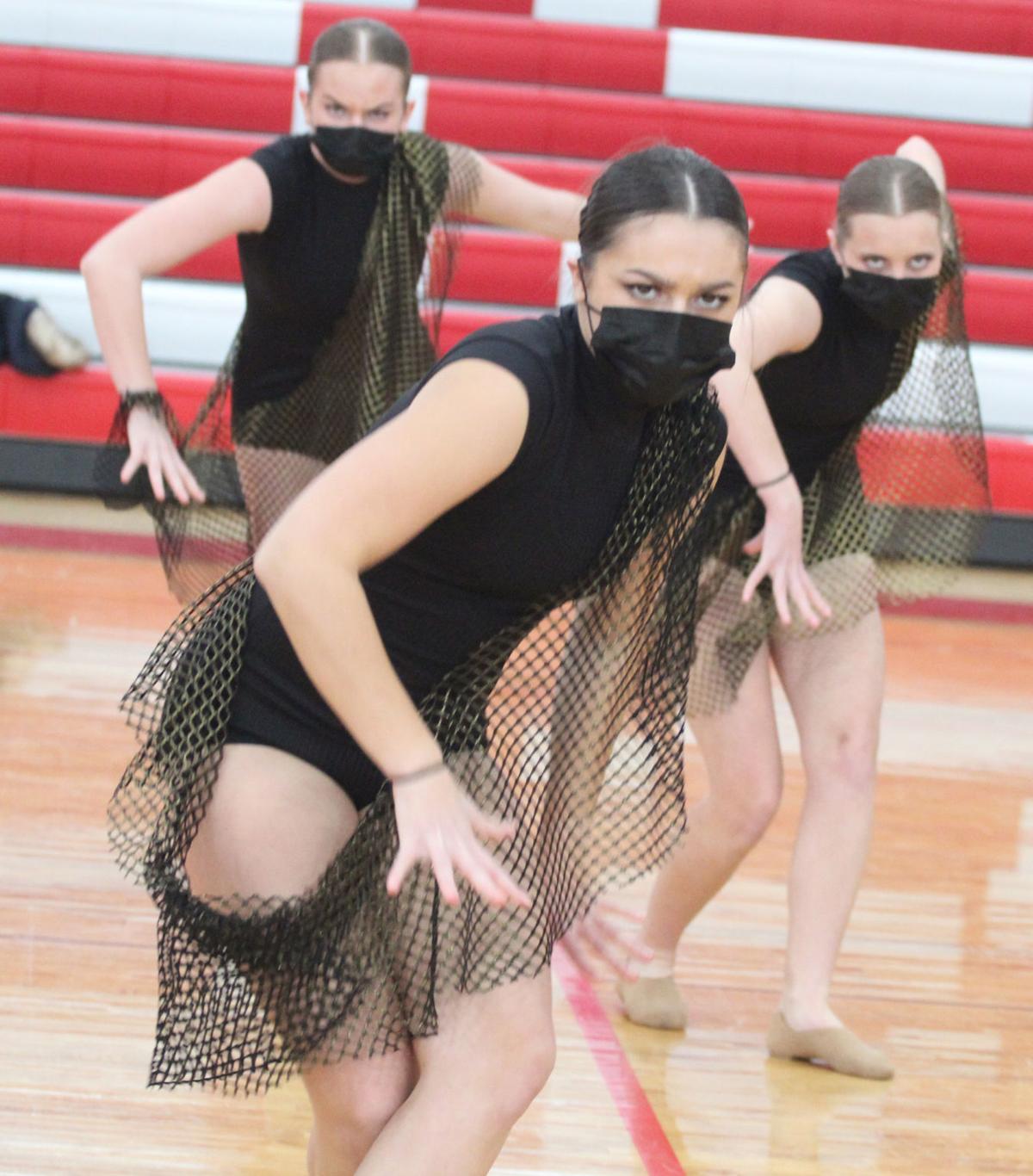 If judges can’t see your mouths, show them intensity through your eyes. Junior Lucy Engebretson and seniors Elsa Lillegard-Bouton and Elise Wilson nailed it for Chaska on Feb. 6. 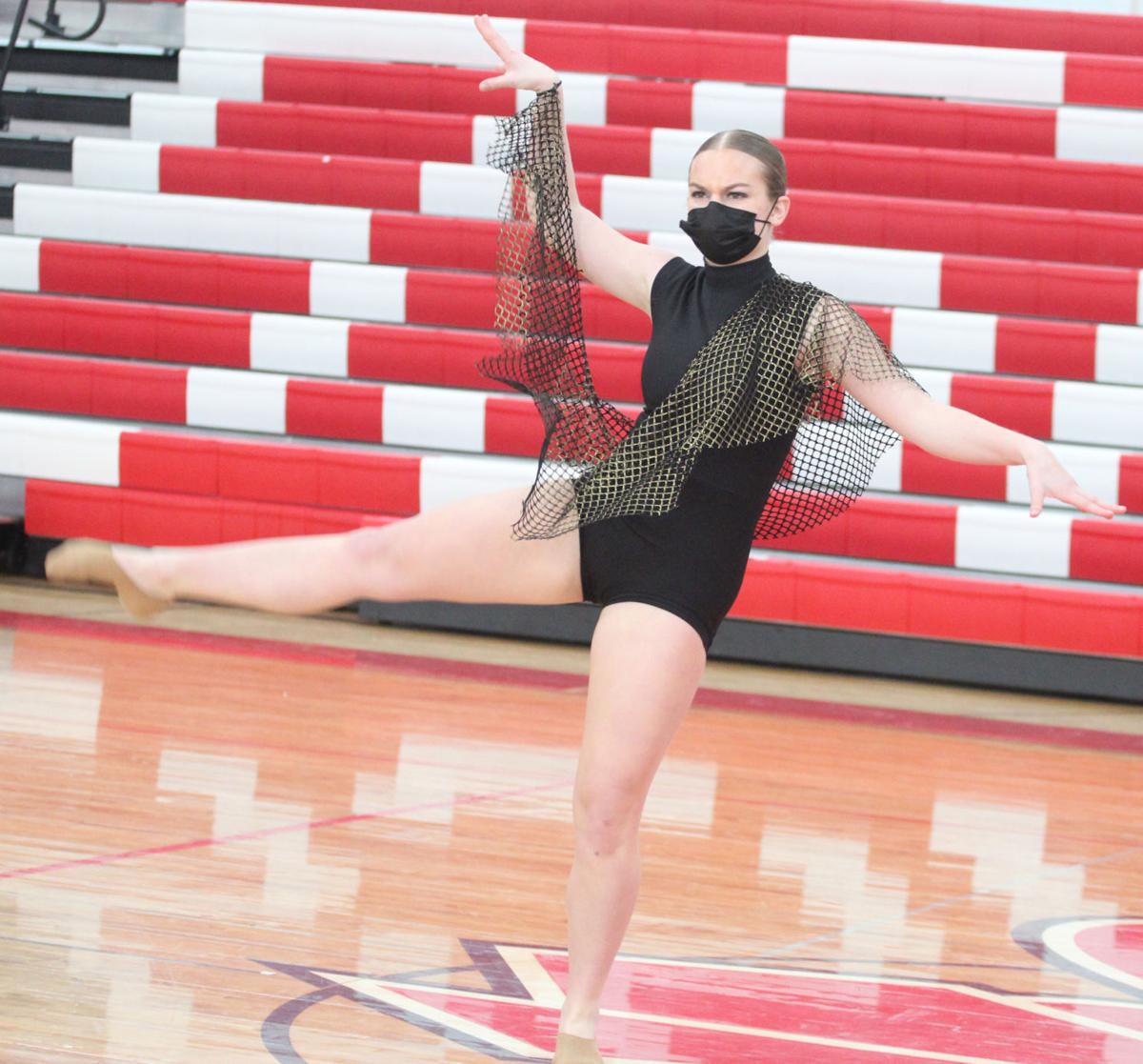 Chaska captains Sophie Fronius and Madison Daly with a turn during a varsity jazz performance at the Metro West Conference Championships Feb. 6 at Benilde-St. Margaret. The Hawks were crowded champs in both jazz and kick.

Freshman Addison Heroux soars through the air for Chaska varsity jazz at the Metro West Conference Championships on Feb. 6.

If judges can’t see your mouths, show them intensity through your eyes. Junior Lucy Engebretson and seniors Elsa Lillegard-Bouton and Elise Wilson nailed it for Chaska on Feb. 6.

When Carmen Fix talked about a legacy left behind in the Chaska Dance program following a third-place state kick finish last season, she made sure to mention that pride, that drive, that appreciation, was not ending with the Class of 2020 seniors.

The two-year captain knew she was leaving the program in good hands with more than capable juniors.

It is why senior captains Madison Daly, a varsity dancer since eighth grade, and Elsa Lillegard-Bouton, on varsity since her freshman year, draw back to what they have watched. What they were taught. So they can pass on the Chaska dance team legacy to future classes.

"We really enjoyed our captains the last couple of years. They created such a great team culture for us. As captains, all four of us have really inspired to keep on going," said Daly of Lillegard-Bouton, Sophie Fronius and Lucy Wentink. "We're always putting the team first. What is best for the team."

On Saturday, in the Metro West Conference Championships at Benilde-St. Margaret, Chaska was the clear winner, finishing with a judges' average of 85 with two scores of 87 in kick. The average score was 83 for the Chaska jazz team.

Champions in both dances ahead of runner-up Benilde-St. Margaret, third-place Chanhassen, Bloomington and Robbinsdale Cooper.

"Our coach always talks about how it's a gift that we get to have this season. It feels rewarding, especially as seniors, to be on the floor. You wait for your senior year for a long time and that wait even got extended. The competitions aren't what we're used to, but we're adjusting to this year's norms and what we're able to do to compete," Lillegard-Bouton said.

THE SAME, BUT DIFFERENT

Saturday's conference championships were confirmed after dancers had left the building. By the time Chaska had taken the floor with its first performance, B-squad, JV and varsity jazz, three schools had already completed their routines and were out the door.

With enhanced COVID protocols, only fans from each school's cheer section were allowed in the gymnasium during their performances. Gathering spaces such as a library were used for spectators to be staged.

Parent volunteers sprayed and wiped down the bleachers and chairs after each school's dances.

"Our energy needs to come from us since we don't have the spectators that fill the gym like we're used to," Lillegard-Bouton said.

"It starts at practice for us every year. The way we cheer for each other there really comes out when we're in competition, too. It's just even more important now with just our home fans watching," Daly said.

Then again, not much has been like before. Competitions have been broken into pods. Award ceremonies are conducted through email and over the phone.

Even the costumes look different with dancers required to wear matching masks over their mouth and nose. Makes showing off those facial expressions to judges a bit tougher.

"It was definitely hard when we came back from the pause and we were first running through the dances. We weren't in the kind of shape we would normally be. As we got stronger, I feel like it's gotten easier. Your body gets used to it. It's hard being judged with how your performance, with your face, when a lot of that is taken away by the mask. We talk a lot about bringing intensity out through your eyes so the judges see that with your routine effectiveness," Lillegard-Bouton said.

Unlike other winter sports that began in January after the pandemic shutdown restrictions were softened, dance team was underway in November when COVID cases spiked, causing a pause in the season.

Chaska and other teams around the state were two weeks into the season, the first week dedicated to choreography. That meant learning routines went virtual.

"We had virtual practices over Goggle Meet a few days a week, and then the other days as captains we made a schedule to work on things that we could do as individuals. We're doing everything we could to keep up with the season over the pause," Lillegard-Bouton said.

"We were able to learn our choreography for both of our dances during the pause. It was definitely an interesting experience teaching, picking up things over a screen instead of having someone right next to you," Daly added.

When the season resumed, competitions began just days later. Chaska competed in events at Wayzata and Eastview as well as conference meets in the home gym and at Chanhassen High School.

For Daly, there's extra special meaning. Her twin sister, Taylor, is on varsity kick again with her.

"It's really nice to experience this with her. We both have our own jazz teams, with her on JV and me on varsity, and both coming together for kick. We're both honest about giving each other feedback," Daly said.

In a normal year, Chaska would be preparing for the state meet this weekend. Instead, the regular season continues, competitions at Edina on Saturday and at Hopkins for a jazz event on Feb. 19.

Section 2AAA returns to Edina High School on Saturday, Feb. 27. The Hornets' gym will be the 2021 state host, shifting from the Target Center, on March 12-13.

"It was very exciting to hear the news that we're going to hopefully have a state meet. Now that conference championships are done, really, sections and then state, hearing our names called, is our biggest goal. It's great to hear that we'll have that opportunity this year," Lillegard-Bouton said.