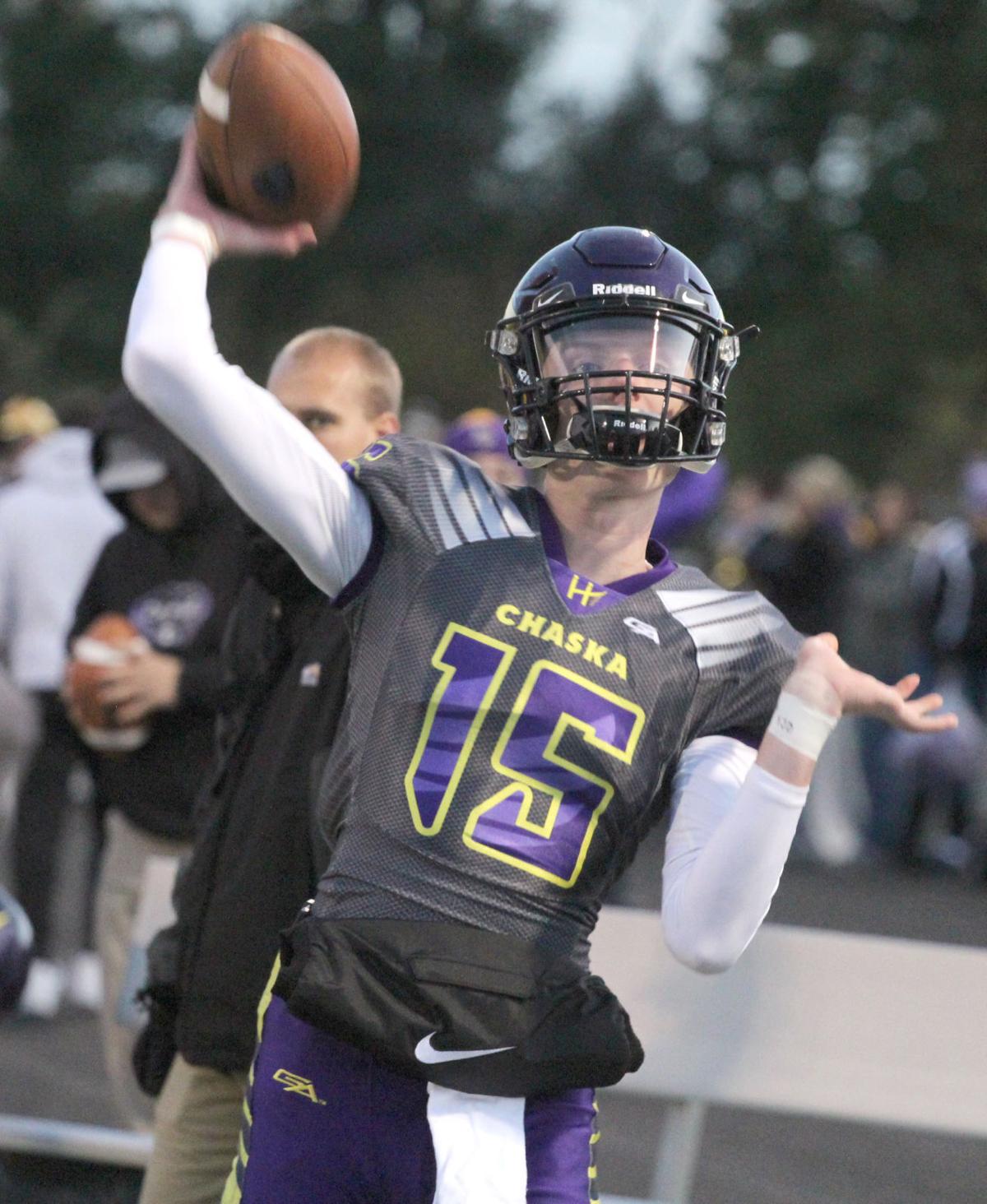 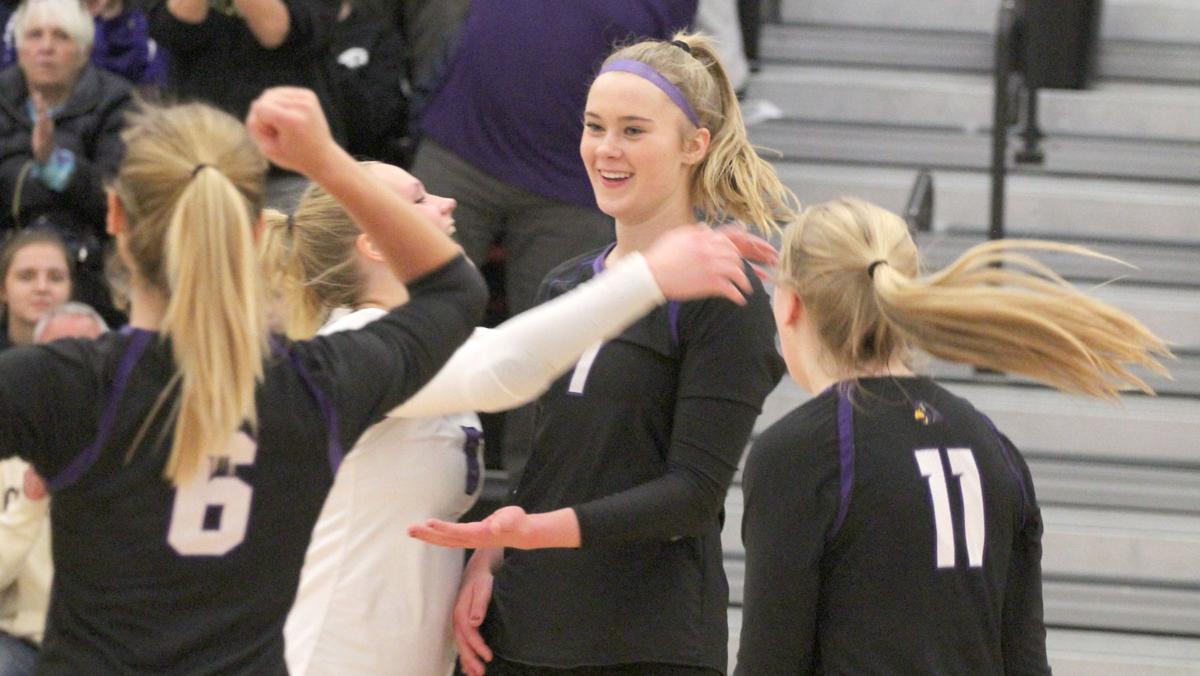 The reaction of teammates tells it all. Mallory Heyer smashed a ball for a kill in a playoff win at Eden Prairie last October for Chaska Volleyball.

The reaction of teammates tells it all. Mallory Heyer smashed a ball for a kill in a playoff win at Eden Prairie last October for Chaska Volleyball.

Matthew Paul stood on the sidelines at U.S. Bank Stadium last December. He watched as quarterback Grif Wurtz led Chaska down the field, scoring a late touchdown to secure a state championship title.

Paul, a back-up quarterback the past two seasons for the Hawks, running the scout team, was looking forward to being Chaska's guy this fall. It was going to be his turn to lead the Hawks on the field.

Instead, Paul, along with teammates, and football and volleyball athletes across the state of Minnesota, must wait, with hopes of having a 2020 season begin in March 2021. A new hybrid third season developed by the Minnesota State High School League announced Aug. 4.

"I was hanging out with Ethan (Bachmann). We kept refreshing his Twitter feed, waiting to see the news. It's something we sort of expecting, but at the same time it's definitely disappointing. My senior year, playing on Fridays, it's something I've looked forward to since third grade," Paul said.

Instead of dwelling on the decision made, Paul is looking at it differently.

"If we played it in the fall, we would have to be really cautious and I know things would have looked different. We might have had any fans. No one knows what will happen in the spring, but hopefully we can get a full season, or at least part of a seasn, have fans, and all of this starts to go away and we can play football again," Paul said.

For Paul, who sat out his junior basketball season recovering from knee surgery, said after a lot of physical therapy, he definitely feels himself again. He spent many hours in the weight room. While organized practices weren't allowed, Paul and teammates got together, matching up 1-on-1, sometimes more of a 7-on-7 passing scrimmage.

"I want to throw a lot more this year. That will be more of a focus of our offense this season. Having guys like Nic (Snuggerud), Ethan, Spencer (Goetz), I'm excited to get going with them. The big thing right now is keeping healthy, getting in the weight room, staying positive through of all this," Paul said.

Paul and Chaska felt good about their chances this fall. A large offensive line, weapons throughout the offense, now it's waiting for March to show all of that.

"These last couple of weeks, I felt really good about where we were. I think we showed ourselves how good we really could be. Running scout team the last two years, getting as many reps as I did, it seems pretty easy for me right now. I'm excited. We just need to stay loose and keep improving for next spring," said Paul, who said he grew 10 inches over two years and stands near 6'5".

While football is classified as a high-risk sport, volleyball is in that medium category along with soccer. So when Mallory Heyer, junior at Chaska High School, found out the news of no fall volleyball she was blind-sighted.

"I was super surprised. I thought we'd have a fall season. Maybe it would be shortened, but I thought we would play. I think my teammates and coaches were expecting to play, too," Heyer said.

Even as it has sunk in that the volleyball season won't start for another six months, Heyer said it still is disappointing.

"Fall sports are so much fun. There's just so much energy that comes out of them. To start a school year without them feels weird. Especially how we left off last year, how we came together in the playoffs, we were all really excited to get going again this month," Heyer said.

After months of playing AAU basketball -- Heyer's team placed third at state on Aug. 9 -- the usual switch to volleyball is a welcome change both physically and mentally.

Heyer wonders how high school volleyball, club volleyball and AAU basketball next spring will coexist. That is a question for many, in multiple sports.

With volleyball not playing, the Chaska junior plans to hit the road with her family and visit college campuses as she looks to narrow potential basketball programs to 10 or so in the next month.

"People ask me all the time if I have any favorites yet. The list is pretty long still. I really want to get out of the Midwest and check out places I've never visited. Really find the best place for me," Heyer said.

While there will be no games in 2020 for Minnesota high school football teams, the MSHSL has developed an optional fall training season for volleyball, football, and MSHSL-sanctioned spring sports.

Football and volleyball programs can have 12 daily sessions between Sept. 14 and Oct. 3. Each sport will have the opportunity to have an organizational meeting and distribute equipment on a date to be selected prior to their fall training season.

At the discretion of school administration, students may participate simultaneously in approved fall sports and fall training seasons.

Tryouts, scrimmages versus other programs, jamborees, competitions, and captain’s practices are not allowed this fall for football and volleyball or spring sport training sessions.

Heyer said most of her high school volleyball teammates play in the Chaska Juniors program. Because of this, those club teams are looking to schedule fall leagues outside of the control of the MSHSL.

Heyer, though, is out of luck with that scenario. That means she will have more time for basketball this fall. Something that is usually put on hold.

"I for sure will focus more on basketball this fall. I think our AAU season will be extended. We'll likely run some practices, maybe play in a few tournaments. It's a great chance to keep working on my game," Heyer said.

While football and volleyball have been moved to a March start date, other fall sports remain, with first practices slated for Aug. 17.

Dual Meets only (no invites or tournaments)

Dual Meets only (no invites)

Maximum number of contests: 7; Per week: 2

Dual or Tri meets only (no invites)