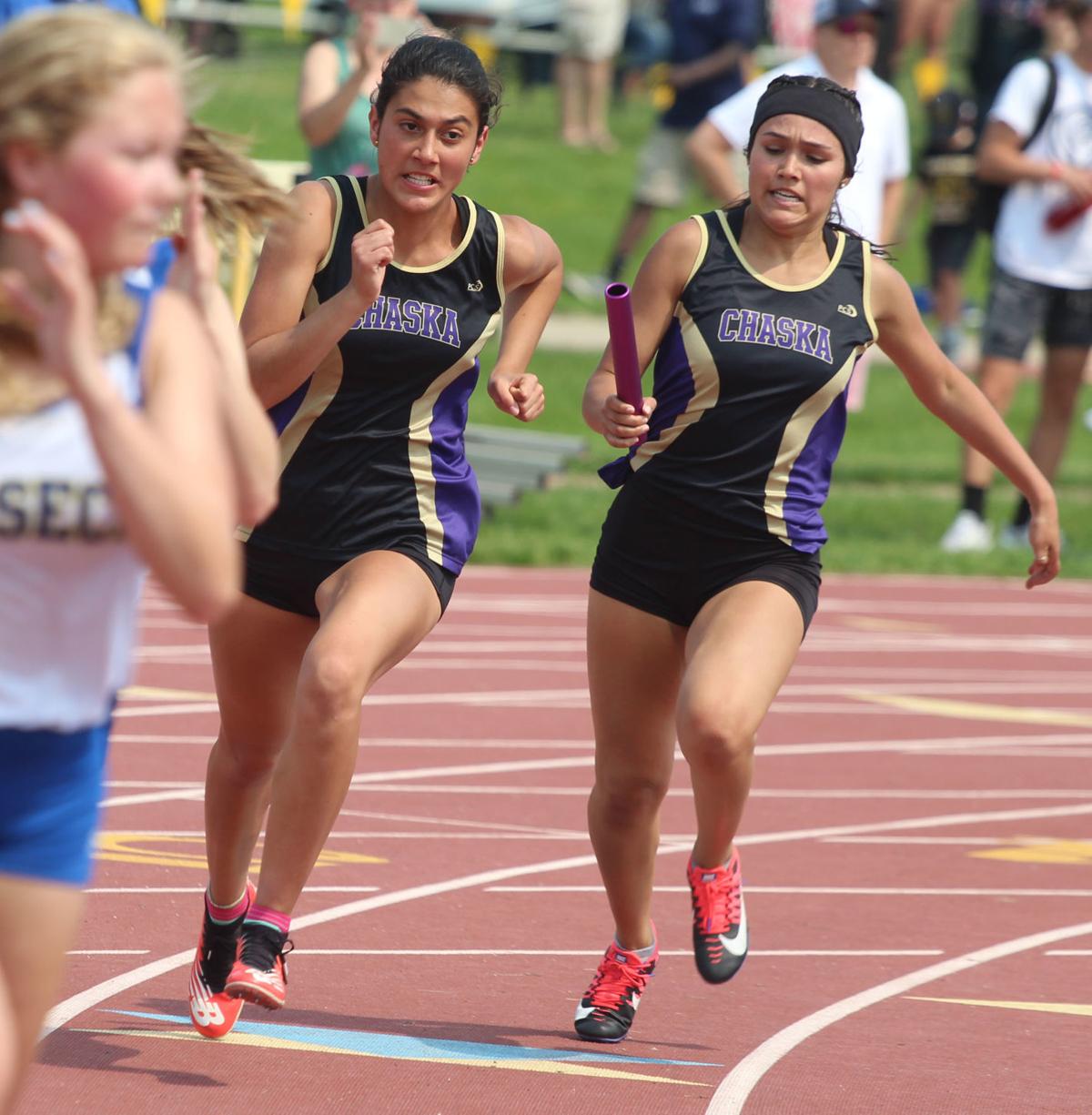 Judea Montoya takes off on the second leg of the 4x200 relay, reaching back for the baton from her sister, Keilah, in Chaska’s school-record performance at the Section 2AA Meet in 2019. 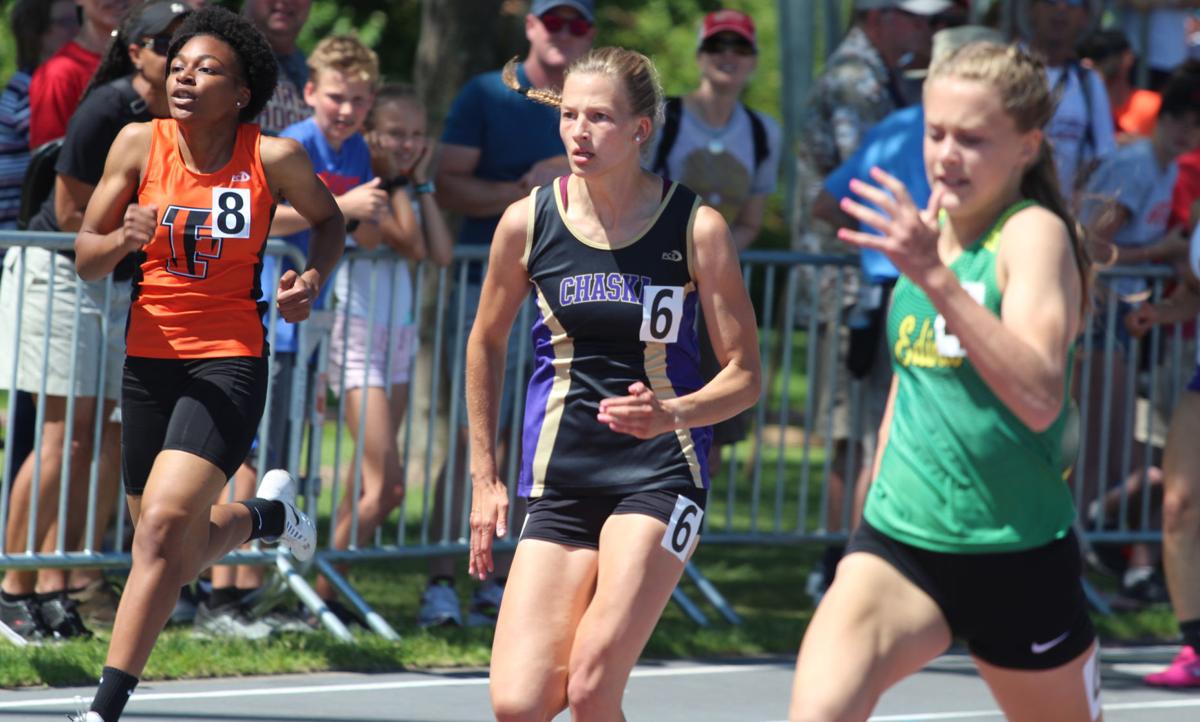 Chaska’s Lilly Halvorson, middle, charges hard down the backstretch of the 400-meter finals for sixth place in a school-record 57.09 seconds at the 2019 state meet.

Judea Montoya takes off on the second leg of the 4x200 relay, reaching back for the baton from her sister, Keilah, in Chaska’s school-record performance at the Section 2AA Meet in 2019.

Chaska’s Lilly Halvorson, middle, charges hard down the backstretch of the 400-meter finals for sixth place in a school-record 57.09 seconds at the 2019 state meet.

Lilly Halvorson was familiar with classmate Judea Montoya, but it wasn’t until their sophomore season on the track in 2018 that she discovered she was going to have a training partner in her.

Montoya, in her first year in the Chaska program, quickly made an impression with coaches and teammates.

“She started out in short sprints like I think all runners do before coaches drag you into longer sprints. I just remember seeing her run and think ‘Wow, she has so much potential,’” Halvorson said.

“People always told me to do track. I knew I was faster than the girls in basketball, but for some reason I never thought that would mean I’d be one of the fastest kids on the track,” Montoya said.

By the end of the 2018 season, Montoya and Halvorson were Metro West Conference 4x200 champions and meet record holders, school record holders and all-state finalists.

It was only the beginning.

“Personally running with my sister,” said Montoya of her most memorable moment. “That was plan the whole time. Keilah was going to be that fourth runner on the relay after we lost a teammate (Mara Halvorson) to graduation that first year. We kept basically the same 4x2 relay. Relays are about building chemistry, and staying with the same group really develops that. By the end of last season, our hand-offs were really good.”

“I was also lucky to get to run with my sister Mara. After she graduated, it was about developing a new relationship with Keilah. We had such a good bond on and off the track. The girls made it so fun to run together. If we didn’t get the time we were looking for, we were always there for each other,” Halvorson said.

Most times they did get the time.

Halvorson broke a Chaska school record from 1987 in the 400 meters, a state time of 57.08 seconds. She was sixth in the event after winning a section championship.

“I had a different mindset going into season. I got third as a sophomore and being so close to state, I knew I had it in me, so I made goals for myself. That really motivated me last year. I had this determination to push myself to be at that state podium,” Halvorson said.

Montoya, also a 400 specialist, never set a timed goal, she just went out and tried to improve each day.

“For me it was important to (earn a personal record). I didn’t PR until conference, and when I had did it was by two seconds, so it was a big relief. It was important for me to stay consistent and do my best. I wanted to be proud of myself at the end of the season. That was what I was looking for,” Montoya said.

Montoya remembers running into Chaska coaches at her after-school job as time passed this spring, the likelihood of a track season disappearing each visit.

“At first it was kind of nice, I was getting an extra week off as I was just coming out of basketball. And then things started to look like they weren’t going to happen and it got really hard to stay positive,” Montoya said. “For me, the sad part is I didn’t get the opportunity to be a captain. That was something I was excited for.”

For Halvorson, she echoed the captain’s role loss. Also involved in soccer and Nordic ski, it was upsetting to miss her favorite sport.

“It was an emotional rollercoaster. Some days I would be super motivated to stay active. As the window got smaller and smaller for the season, it sure was tough. When we heard the season was canceled, for some reason I got more motivated again to go to the middle school track; to train like I would be doing if we were competing. It was almost like closure for me,” said Halvorson, who will compete in track at Wisconsin-La Crosse next season.

Montoya, the lone senior on the girls basketball team, which were section runners-up, is headed to North Dakota State University for a major in Mechanical Engineering. While her running career is over with now, she still plans to check in with how the Hawks are doing in the future.

“The relationships I made in my short time in the program, so many of these kids that are coming back next year are so motivated to get better. It doesn’t matter if they’re the fastest runner, or the slowest runner, they all work to make each other better. They are all so positive for each other. Everyone talks to each other. It’s a special team,” Montoya said.

“This program has a great couple of years ahead where they are going to grow. The kids behind us are going to be great leaders. Couple that with the environment around Chaska track, the positive nature of the coaching staff, the sense of community within the team, and great things are going to continue to happen,” Halvorson said.

Rebekah Scott: "I feel like track has taught me so many lessons. I have learned what hard work means and what dedication means, and overall what responsibility means. It has turned me into more of a leader to lead other runners and lead other people."

Captain Jack Bury: "Thank you to Coach (Nate) Foss for all the help over in the sand pits and your commitment to the program. I will never forget when you came over to me and Jonathan (Paynter) at the meeting after my sophomore year and asked me what we were planning to do in track that year. After that moment I knew I was in the spot I needed to be."

Captain Jonathan Paynter: "Thank you to the coaches. You made me the best I could be, both physically and mentally. The takeaway people should have about track is it is physically challenging, but in my opinion that isn't the part I value the most. It's the mental part. It's pushing yourself. Seeing these limits you didn't think were possible before. I think that's empowering. It's important for everyone to know we're capable of doing more than we think we are."

Brianna Loosbrock: "I want to thank everyone who has contributed to my four years at Chaska Track. It's been a great experience and I am so grateful for the amazing friends and teammates I've gotten to know in this program."