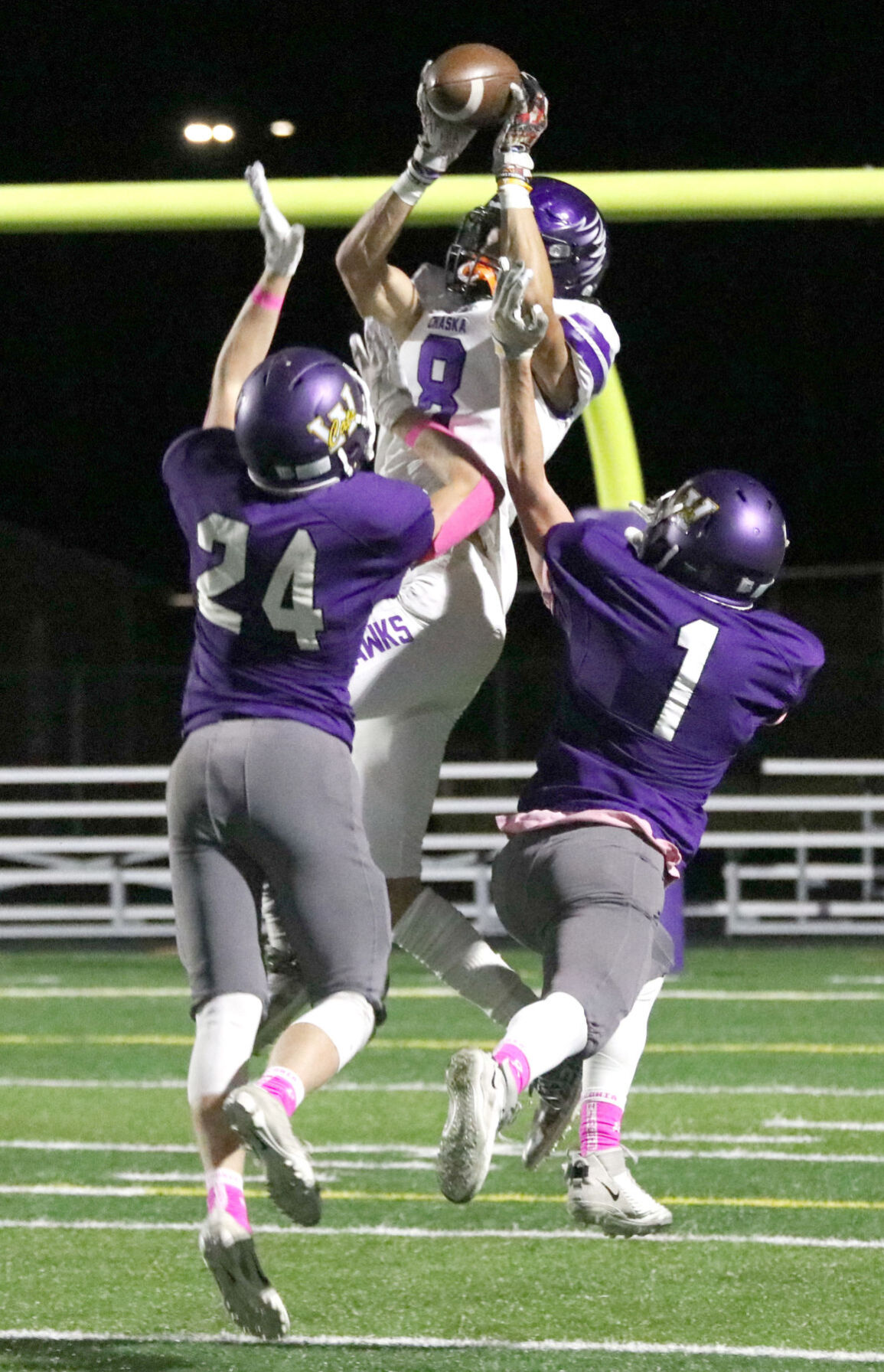 Chaska receiver Colin Dussault makes a catch over two Waconia defenders at the 10-yard line on the final drive, setting up the winning score in a 7-0 win over the Wildcats. 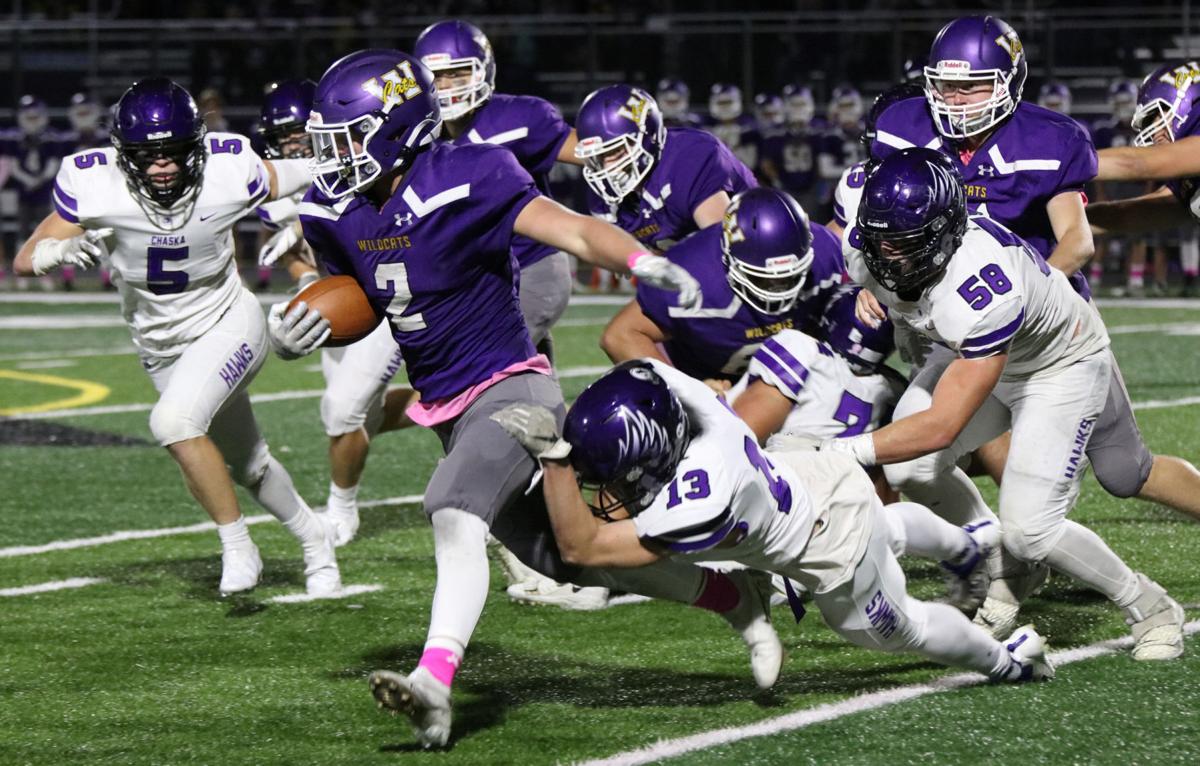 Chaska linebacker Max Hatfield makes a tackle behind the line of scrimmage on Waconia running back Max McEnelly.

Chaska receiver Colin Dussault makes a catch over two Waconia defenders at the 10-yard line on the final drive, setting up the winning score in a 7-0 win over the Wildcats.

Chaska linebacker Max Hatfield makes a tackle behind the line of scrimmage on Waconia running back Max McEnelly.

Scoreless into the fourth quarter, Chaska, taking over possession with 3:38 remaining, drove 57 yards, the final eight on a catch-and-throw from Brayden Sanders to Colin Dussault for the 7-0 win over Waconia Sept. 24.

After converting a fourth down at midfield, Sanders and Dussault hooked up for a 35-yard gain, the catch made over the top of two Wildcat defenders at the 10-yard line.

Following a short run, Sanders lofted a ball to the back of the end zone where Dussault made an acrobatic catch, stretching his leg out with a foot tap inbounds for the go-ahead touchdown with 21 seconds left.

Game Winner! Sanders to Dussault for a Chaska TD!#Soar pic.twitter.com/WoWSxXqMzv

Waconia, after two incomplete passes, attempted a flea-flicker on the final play, unsuccessfully to end the game.

Wildcat star running back Max McEnelly was held to 61 yards on 17 rushes with Waconia quarterback Aaron Young completing 7-of-16 passes for 56 yards.

Waconia twice reached the red zone in the first half, a sack on fourth down ending one drive, while an incomplete pass from the 20-yard line halted another scoring opportunity.

The Wildcats recorded just one first down in five second-half drives.

Jack Boyle recorded his second 100-yard game of the season on 27 carries for Chaska. Sanders was 10-of-16 passing for 120 yards, completing four passes to Dussault for 62 yards.

The game was delayed in the second half after Hawks senior Colton Rada was taken off the field on a stretcher. Chaska coach Bryan Dahl confirmed Saturday that following an MRI, Rada was released Friday night. While sore, he was up and moving around to begin the day.

Chaska, 4-0, ranked No. 7 in Class 5A, hosts Cretin-Derham Hall for Homecoming at 7 p.m. on Friday, Oct. 1. The Raiders, beaten by three ranked opponents to start the season, won in week four over Apple Valley.

Outscored 89-7 in the first two weeks, Holy Family Catholic, on their home field, have stuck with New London-Spicer and Glencoe-Silver Lake ever since, falling a touchdown short in a 22-14 loss on Sept. 24 in Victoria.

Gavin Frye's 53-yard pass and run from Kieran Paidosh followed by an extra point pulled the Fire within 16-14 in the third quarter.

Paidosh, who kicked both point-after tries, opened the scoring for Holy Family Catholic with a 57-yard rush in the second quarter.

Glencoe-Silver Lake jumped out to a 9-0 lead in the first quarter on a touchdown and safety, extending the advantage to 16-7 at halftime.

Alex Beer and Ethan Livermore each had a fumble recovery for the Fire with Michael Richelsen leading Holy Family Catholic with 17 tackles. Nick Charpentier and Bennett Russo also had double-digit tackle efforts with 13 and 11.

Holy Family Catholic (0-4) is at undefeated Dassel-Cokato on Oct. 1.

Jacob McCalla and Bret Worley combined for 221 yards and three touchdowns as Minnetonka rebounded from its first loss in a 22-6 road win at Champlin Park on Sept. 23.

Worley's 9-yard rushing score with 3:10 left in the second quarter broke a 6-all tie for the Skippers.

Keagan Zabilla added to the lead at 16-6 with a 33-yard field goal in the third quarter. Worley's 53-yard rush and score sealed the win in the final quarter.

Ashton Hoffman and Evan Swenson recorded second-half interceptions for the Skippers on defense.