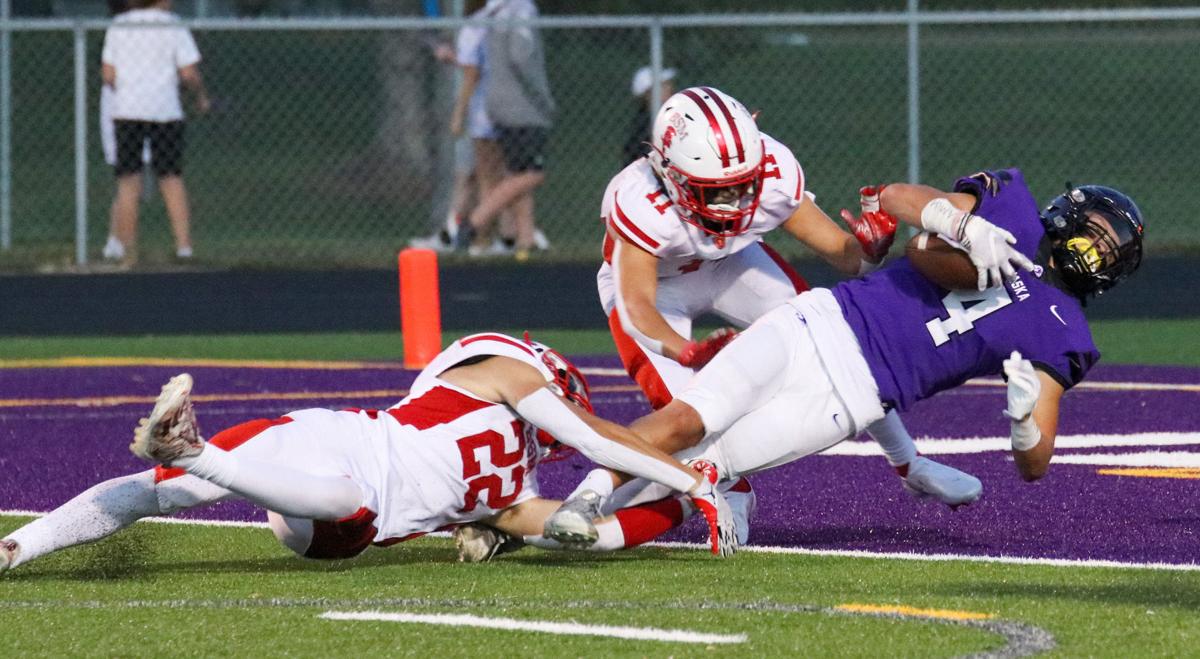 Chaska's Karver Miller crosses the plane of the goal line for a second quarter touchdown, the first of two in the game for the senior receiver. 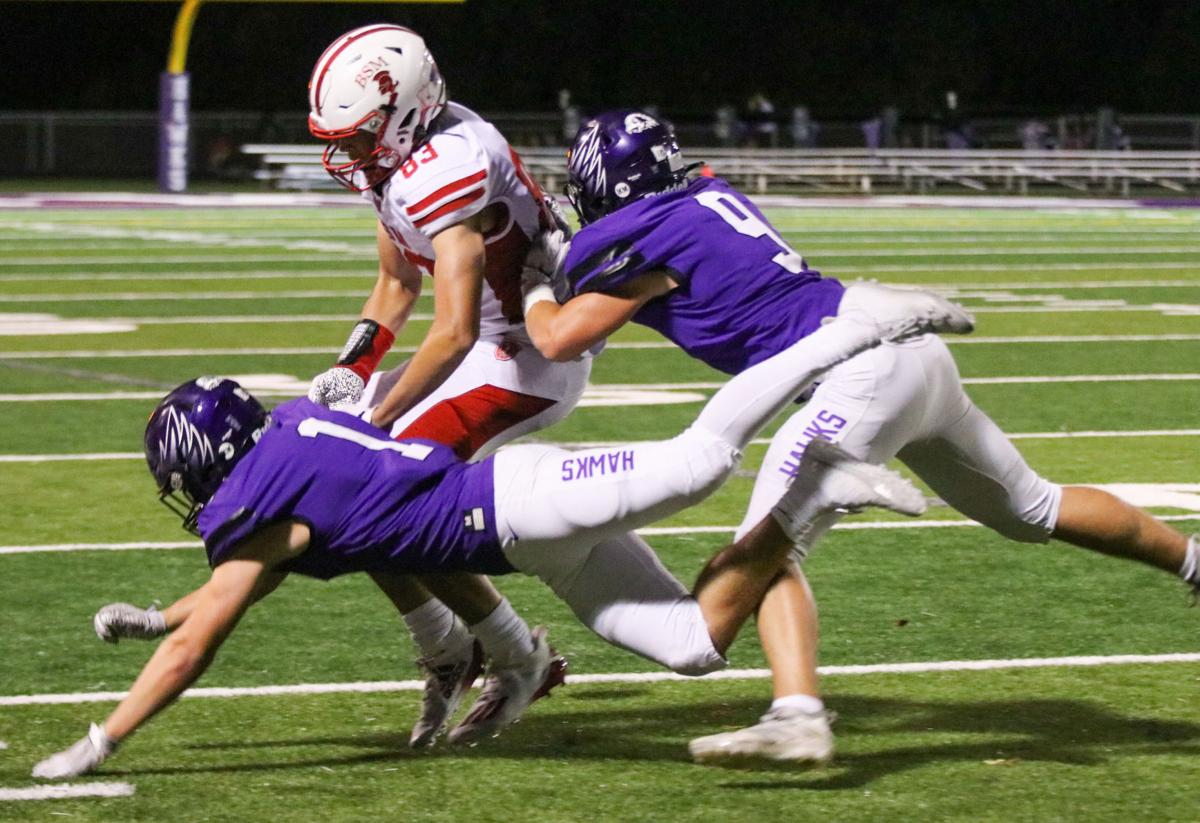 Nolan Kemp (1) and Ben Bowe (9) converge on a Benilde-St. Margaret receiver, forcing a drop in the second half on Sept. 17. 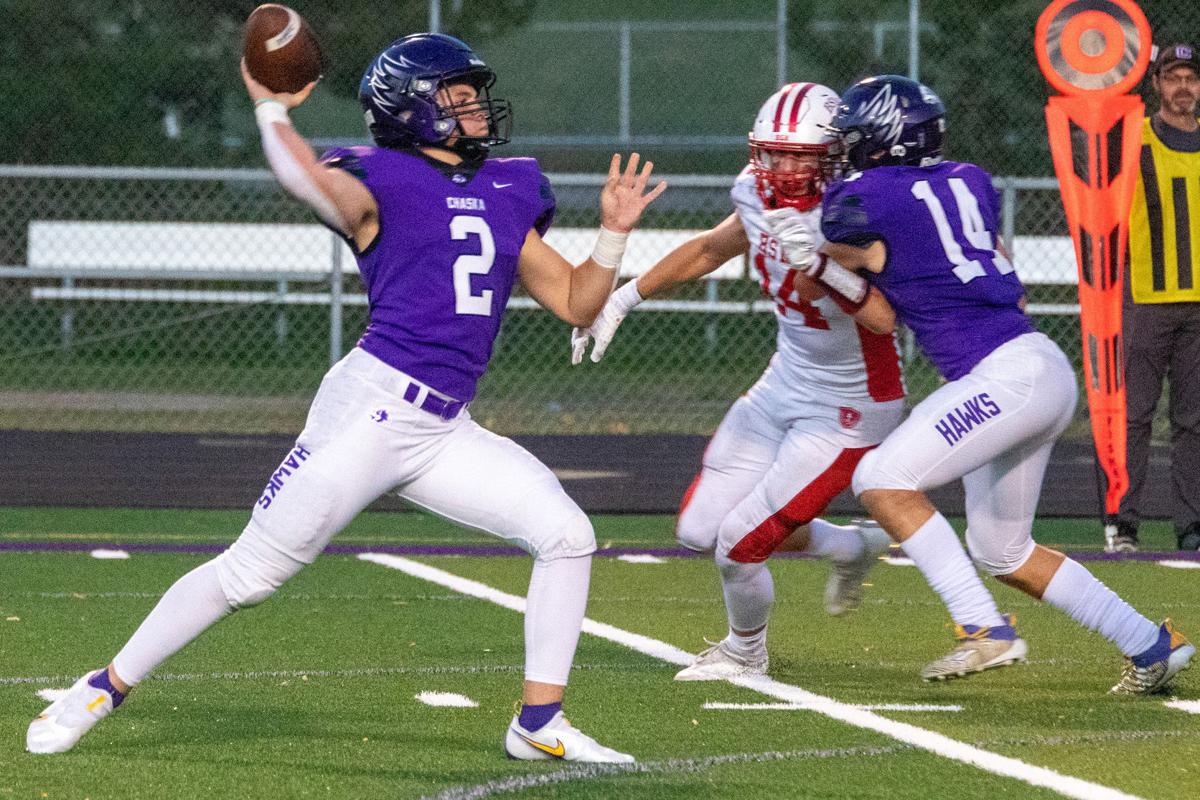 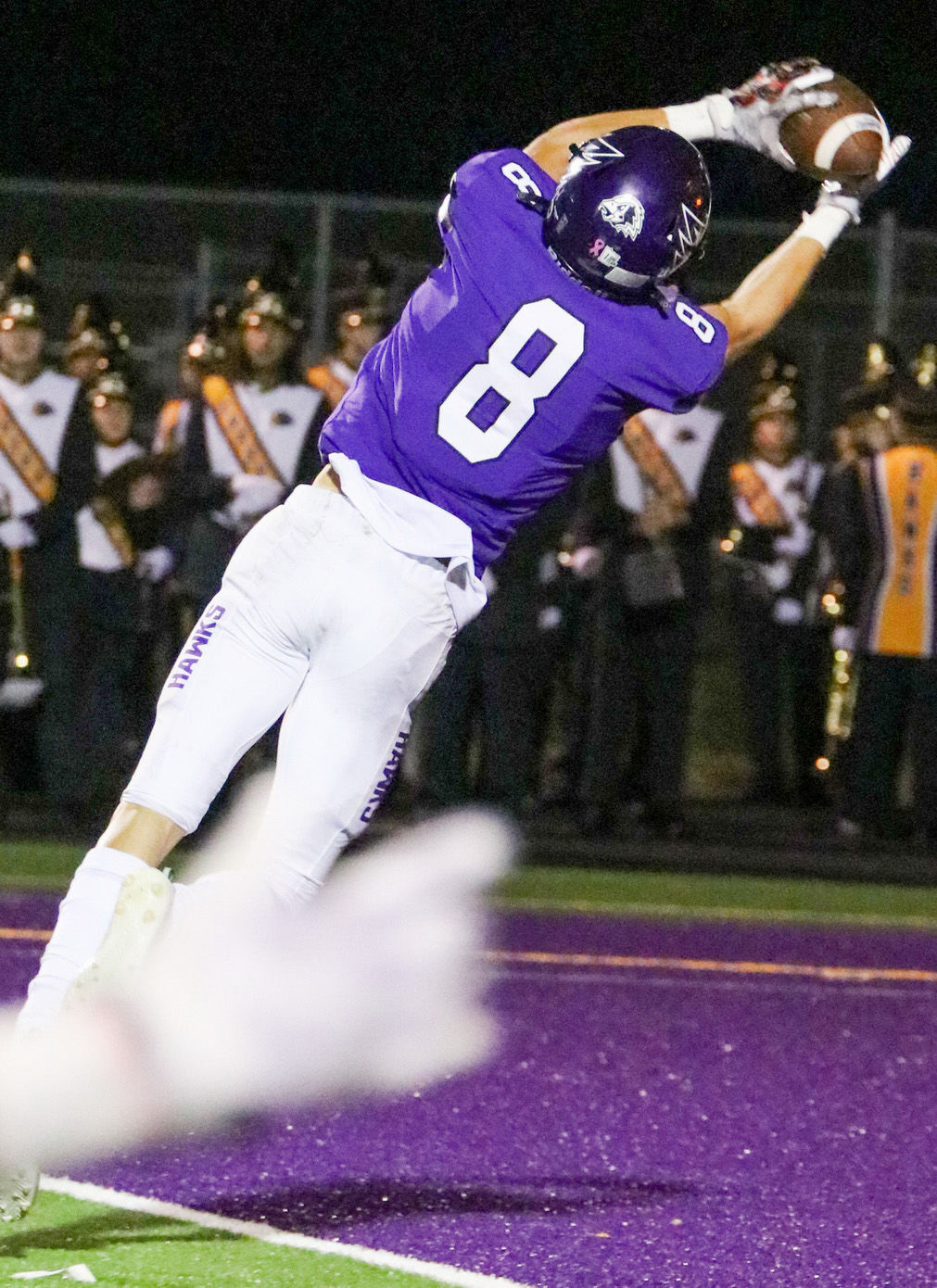 Chaska's Karver Miller crosses the plane of the goal line for a second quarter touchdown, the first of two in the game for the senior receiver.

Nolan Kemp (1) and Ben Bowe (9) converge on a Benilde-St. Margaret receiver, forcing a drop in the second half on Sept. 17.

In week three, Chaska showed it has an evolving passing game, three touchdown receptions, two from Karver Miller, in a 41-14 win over Benilde-St. Margaret.

Scoreless 12 minutes into the game, the Hawks scored on the first play of the second quarter, a Boyle 1-yard run, the start of a 27-point frame for the Hawks.

Quarterback Brayden Sanders connected with Miller and Colin Dussault, scores of 11 and 21 yards. Dussault's first touchdown catch with 11 seconds left in the first half.

Sanders and Miller hooked up for 67 yards just 58 seconds into the third quarter to extend the lead to 33-6.

As a team, Chaska totaled 299 rushing yards, getting 73 and 71 yards from Reese Turner and Boyle with Sanders leading the team with 85 yards. Sanders completed five passes for 120 yards, including three receptions to Miller for 86 yards.

Jamarrius Courtney scored twice for Benilde-St. Margaret, finding the end zone in the final minute of regulation. Courtney was 14-of-22 for 154 yards through the air, leading the team in rushing with 31 yards.

Chaska is at Waconia in week four at 7 p.m. on Friday, Sept. 24. The Wildcats are 2-1 overall coming off wins over Robbinsdale Cooper and Orono. Star back Max McEnelly is averaging 140 yards per game, scoring six of Waconia's eight touchdowns.

The Storm scored twice in the first half, holding on for a 14-7 win to improve to 2-1 overall.

Chanhassen held Spring Lake Park to 49 passing yards with a Kurt Schaefer interception, while the Panthers were able to amount just 125 rushing yards on 37 carries, averaging three yards per carry.

Linebackers Alex Carstens and Gabe Porthan led Chanhassen with 13 and 12 tackles, respectively. Carstens and Sam Macy added a sack each as well.

Chanhassen scored twice in the first half, an 11-yard catch from Will Schleicher from Grant Muffenbier for the 7-0 lead. Muffenbier was 11-of-19 for 152 yards, connecting with Josh Kirchoff and Charlie Coenen for 64 yards each.

Brady Grandstaff, who shouldered 15 of the team's 28 rushing attempts, added a 4-yard touchdown run, part of a 60-yard game for the Storm senior.

Spring Lake Park's lone score came one play after a blocked punt, a 5-yard run from Nate Litke with 10:17 left in the game.

Chanhassen hosts Orono (1-2) on Friday, Sept. 24 at 7 p.m. for Homecoming. The Spartans own losses to Robbinsdale Cooper and Waconia with a lopsided win over Holy Angels.

Playing on the home field for the first time in the 2021 season, two touchdown passes from Gavin Frye had Holy Family Catholic within a score at halftime.

New London-Spicer, though, added a pair of touchdowns in the second half, winning 35-14 on Sept. 17.

Frye connected with Bennett Russo and Michael Richelsen on throws of 10 and 65 yards in the first half. Richelsen's catch and run came with 1:49 left in the second quarter, drawing the Fire within 21-14 on a Kieran Paidosh extra point.

Frye completed nine passes in the game, throwing three interceptions, for a career-high 170 yards. Richelsen was the team leader with four receptions for 105 yards, adding 22 rushing yards as well.

Alex Beer (10), Paidosh (nine) and Richelsen (eight) were tackle leaders for the Fire with Nick Charpentier adding a sack with six tackles.

Holy Family Catholic (0-3) hosts Glencoe-Silver Lake on Friday, Sept. 24. The Panthers, week one winners over Little Falls 13-7, have been outscored 62-7 in losses to Annandale and Litchfield.

A match-up of top-10 unbeaten teams in Class 6A, Maple Grove scored three times over the final eight minutes of the first half, running away with a 35-7 over Minnetonka on Sept. 17.

Quarterback Jacob Kilzer accounted for all five touchdowns, three on the ground on runs of 25, eight and one yards, while hitting on connections with receivers on 35 and 50 yards.

All 42 points were scored in the game's first 24 minutes.

Minnetonka, playing without starting quarterback Will Martin, was unable to move the ball on the ground. Quarterback Miles Spasojevic was 14-of-21 passing for 115 yards, including a 13-yard strike for a second quarter score to Tyler Lien.

Cade Conzemius hauled in seven receptions for 39 yards as well for the Skippers, which were sacked six times, five by Maple Grove's Mason South.

Minnetonka (2-1) looks to bounce back on Friday, Sept. 24 at Champlin Park. The Rebels are 0-3, single score losses to Woodbury and Blaine as well as top-5 Wayzata 23-0.