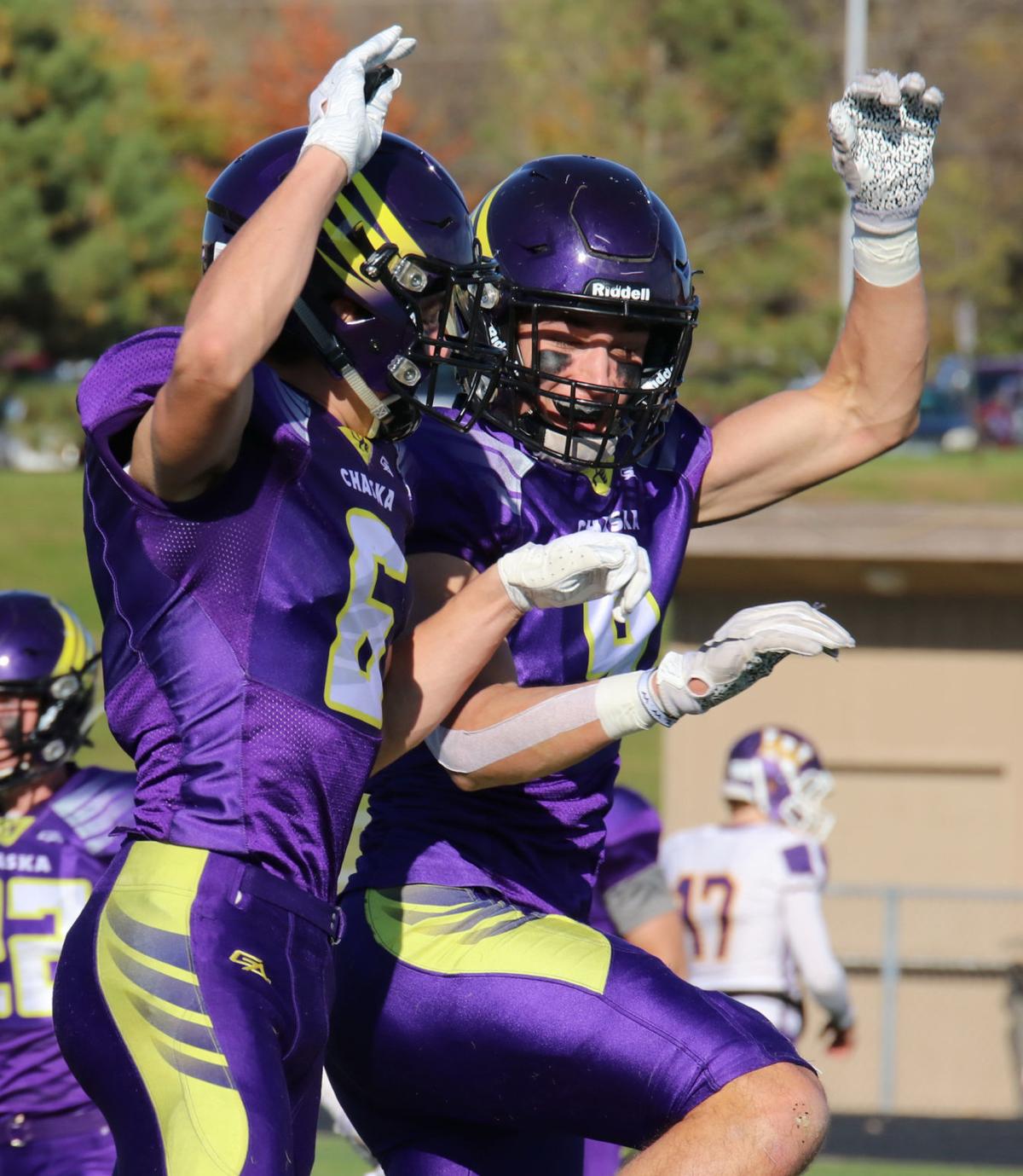 Nic Snuggerud (6) and Nick Stanger (9) celebrate a 46-yard field goal for the 10-0 lead in the first quarter for Chaska. 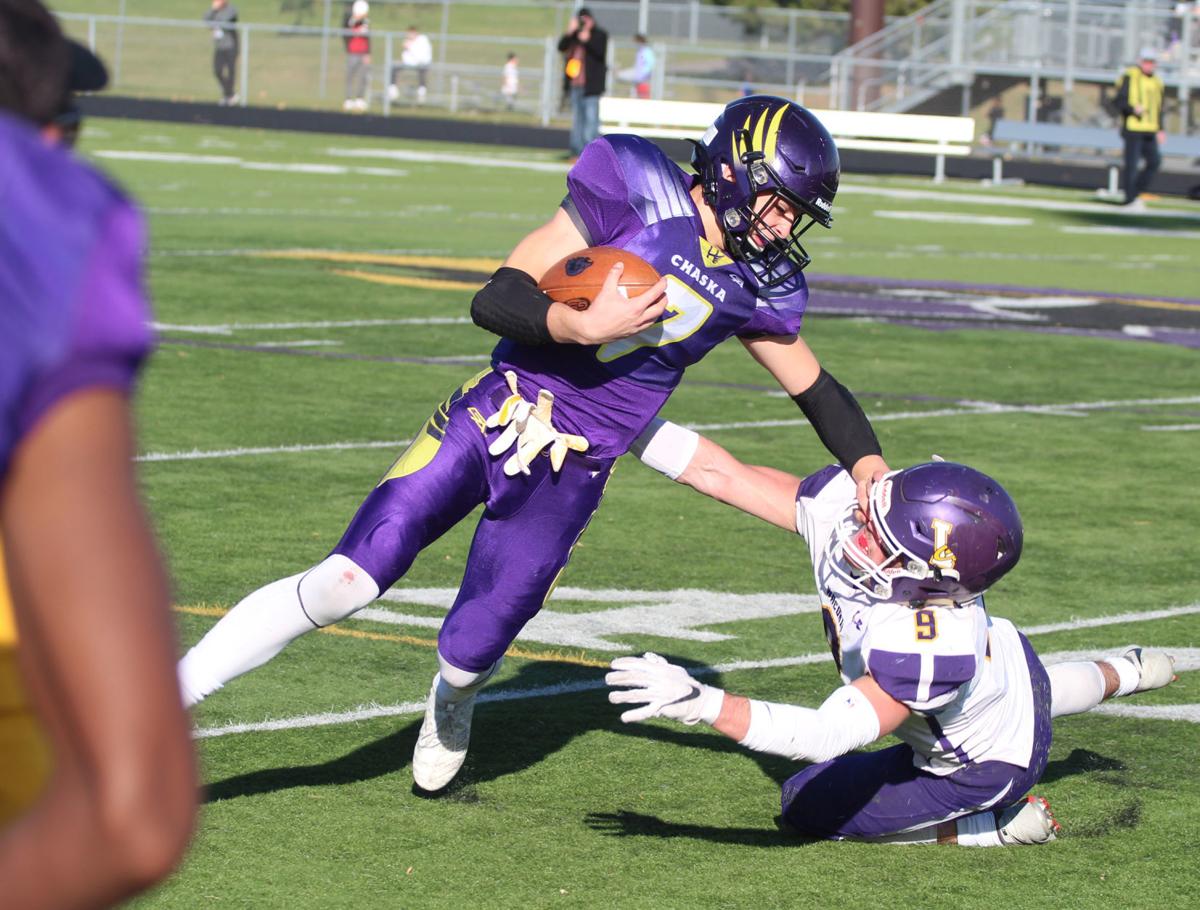 Quarterback Grif Wurtz stiff arms Waconia's Tim Stapleton to pick up a first down with his legs.

Nic Snuggerud (6) and Nick Stanger (9) celebrate a 46-yard field goal for the 10-0 lead in the first quarter for Chaska.

Quarterback Grif Wurtz stiff arms Waconia's Tim Stapleton to pick up a first down with his legs.

Mankato West posted a pair of sub-.500 seasons in 2004 and 2005, a realignment in Section 2AAAA bringing in a Hutchinson program that had made 11 consecutive trips to the state tournament.

Dan Dobson was the quarterback that ended that streak, a 35-28 Scarlet win in 2006. The start of 14 consecutive section final appearances.

When former head coach Mark Esch took over the Mankato West program in 2005, he brought a spread offense that was unique, that was unmatched.

Hutchinson turned around, handed the ball off every play. Mankato West sent three or four receivers out wide and when teams focused on the pass, the Scarlets won the battle at the line of scrimmage with the ground game.

Dobson would later play at the University of Minnesota Duluth. He was followed by Ray Teachout (MSU-Mankato), Philip Nelson (Minnesota/Rutgers), Rob Meidl, Ryan Schlichte (MSU-Mankato), Zack Annexstad (Minnesota), and now Jack Foster, a three-year starter for the Scarlets at quarterback.

When another class was added in 2012, the Scarlets moving up to 5A, despite having to forfeit four games, came away section champions in an overtime victory over Chanhassen.

The Scarlets advanced to yet another section final with a 50-21 win over Chanhassen in the semifinal round.

Mankato West meets up Friday with a familiar foe, Chaska, at 7 p.m. on the Hawks' home field.

The only other team to beat Mankato West in the section playoffs in the current streak being Waconia in 2007.

Both Chaska wins were led by defense. The Hawks jumped out to a 14-0 first half lead in 2018. Mankato West managed just six points in the 2013 final.

If Chaska returns to the state tournament, it will likely have to be a defensive stronghold again.

Chaska won four games by shutout in the regular season. Only one team, No. 2-ranked Robbinsdale Armstrong, has scored more than one touchdown against the Hawks first-team defense.

Chaska's linebacking crew of Marcus Holasek, Stevo Klotz, Nick Stanger, and Gabe Kinneman are among the best in the state. Cornerback Michael Brown has four of the team's seven interceptions.

Two-way star Wyatt Block has rushed for more than 500 yards with six touchdowns on the ground. Owen Johnson leads the Scarlets with 99 rushes, 821 yards and nine rushing scores.

While Mankato West is among Class 5A's highest scoring teams, they do allow around three touchdowns a game. Twice the Scarlets gave up 35 points; six of nine contests teams have scored 21.

An experienced Chaska offensive backfield with seniors Matthew Kuntz (786 yards, nine touchdowns) and Klotz (413 yards, seven touchdowns) is an area the Hawks will lean on.

Chaska rushed for 164 yards in the 2018 section final. Then quarterback Justin Bach scored twice on the ground, completing 9-of-12 passes for 128 yards as well.

Mankato West scored twice over the last 4:55 to make Chaska fans a little anxious in the final minute.

Chaska will look to start fast once again, having outscored teams 69-7 in the first quarter and 170-21 in the first half in nine games this season.

Tonight's winner will play the Section 4 champion (undefeated Tartan or four-win Mahtomedi) in the state quarterfinal at noon on Saturday, Nov. 9 at Shakopee's Vaughan Field.

Section 5 (Spring Lake Park/Robbinsdale Cooper) and Section 7 (Coon Rapids/Andover) are also on that side of the bracket. The likes of Owatonna/Rochester Century, Robbinsdale Armstrong/Elk River and St. Thomas Academy are on the other side of the state bracket.

Football: Chaska returns to the Section 2-5A final

A group of Chaska football players formed a circle on the sidelines, the spoken message was simple. New team, new attitude, change history.