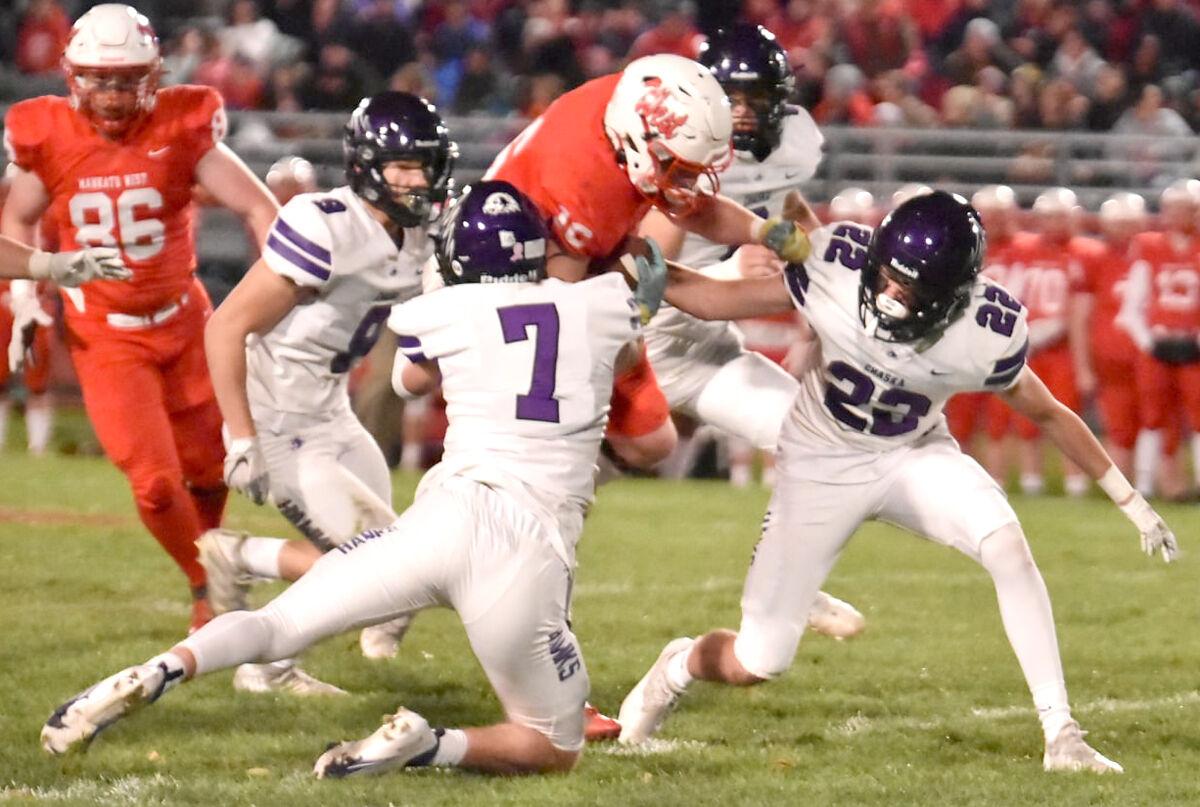 Mankato West running back Walker Britz breaks through the line, taken to the ground by Chaska safeties Trevor Oetter (7) and Kaiden Rector (22). 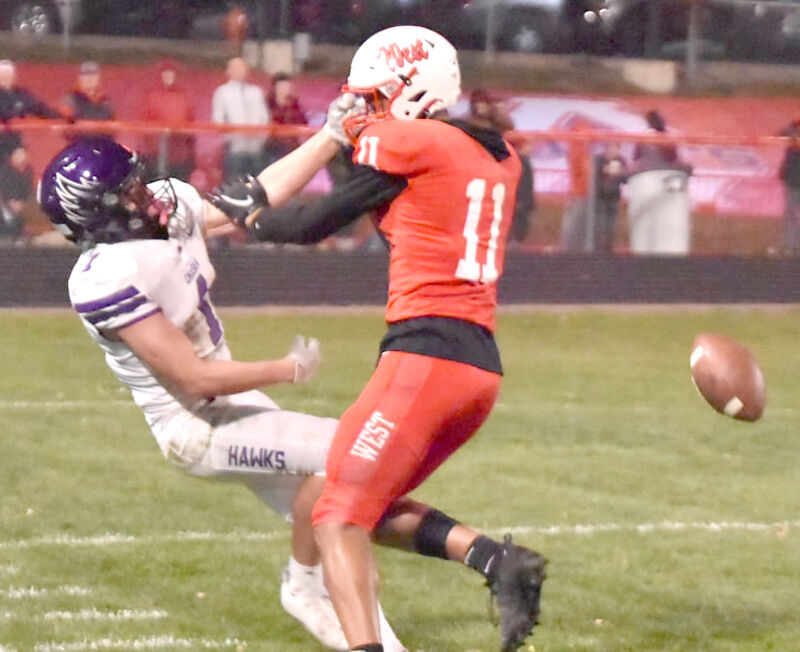 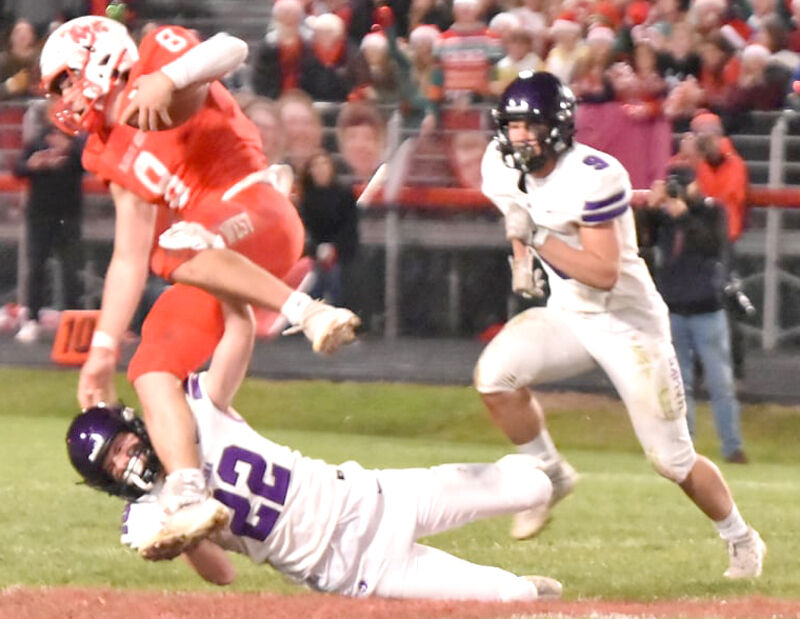 Chaska safety Kaiden Rector drags down a Mankato West receiver in the secondary. 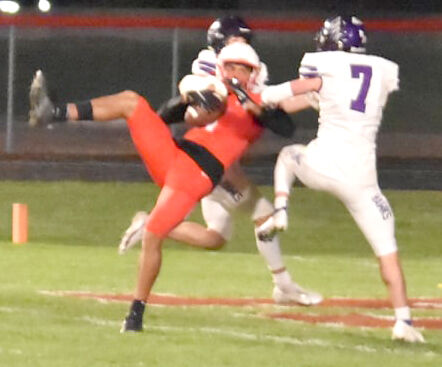 Mankato West with a touchdown catch between two Chaska defenders for a 35-0 lead in the fourth quarter. 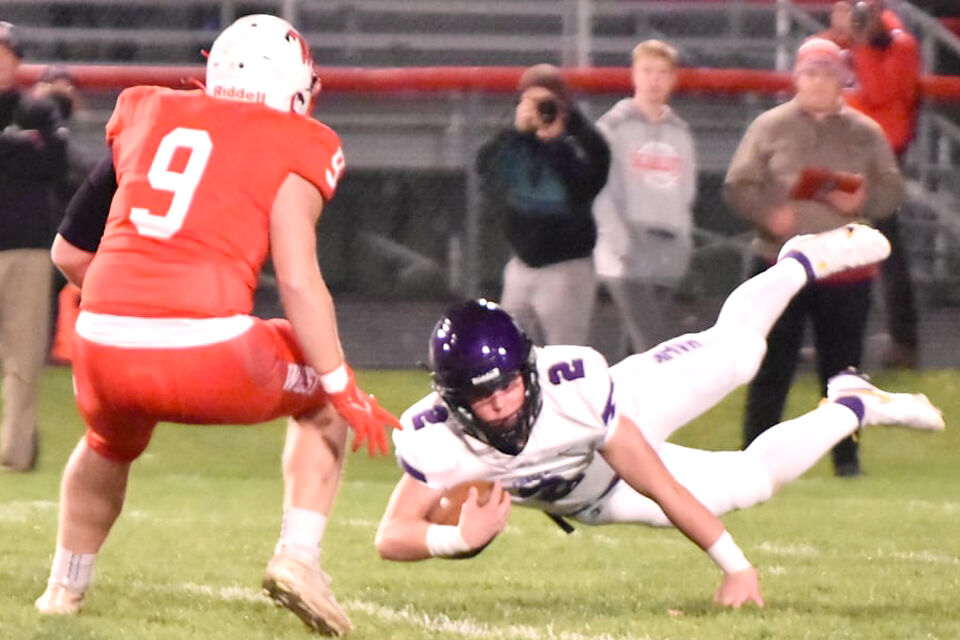 Chaska senior quarterback Brayden Sanders dives ahead for a first-down run on the opening drive of the second half.

Mankato West running back Walker Britz breaks through the line, taken to the ground by Chaska safeties Trevor Oetter (7) and Kaiden Rector (22).

Chaska safety Kaiden Rector drags down a Mankato West receiver in the secondary.

Mankato West with a touchdown catch between two Chaska defenders for a 35-0 lead in the fourth quarter.

Chaska senior quarterback Brayden Sanders dives ahead for a first-down run on the opening drive of the second half.

The question comes up around state football tournament time every year? How does Mankato West do it? How can this program, year in and year out, continue to produce a winning team?

A Scarlet squad that had played in a section championship something like 20 consecutive seasons. Won two state titles and 2008 and 2014 and other years had teams that were right there.

Their 35-0 win in the Section 2AAAAA championship on Nov. 5 one of the more dominating performances in qualifying for the state tournament for the 11th time in 16 years.

And it came against a fellow unbeaten team, Chaska, ranked No. 4 in the state; the two-time defending section champions, and technically the defending Class 5A state champions from 2019.

When Mankato West has both games going offensively, there's nobody that can beat them. Chaska turned them one-dimensional in 2018 and 2019, winning in the process.

But that complimentary football isn't just reserved to offense. It lends to defense as well.

The Scarlets deploy a disciplined defense where every player does their job. When the front four occupy the offensive line, it allows for a middle linebacker player like Ryan Haley to burst through the line for a tackle for loss, or a sack.

Mankato West came at Chaska from the ends, from up the middle, even one time down the line, making them one-dimensional. And like the Hawks' success against the Scarlets in that case, the same was had against a Chaska team unable to sustain drives by just running the ball.

Chaska had 20 yards of offense in the first half -- less if you factor in five sacks -- totaling 107 for the game.

Mankato West, which ran the ball into the heart of the Chaska defense on the opening drive, seven of the first eight plays going to running back Walker Britz, finished with 194 yards on the ground and 137 yards of passing for the game.

Britz, who after being hurt in week eight against Mankato East, missing the playoff opener, returned for the Scarlets, rushing the ball 20 times for 156 yards.

When Britz exited briefly on the opening drive, hobbled after his ninth carry, quarterback Zander Dittbenner moved the chains with his feet, and then connected with star receiver Mekhi Collins on a fade route for the 7-0 lead.

After Chaska's first drive was halted at midfield, pushed back on a sack, Mankato West went to the air again, throwing the ball over the middle to where the linebackers were pushed up forward to stop the run, and the safeties were too far back to make a play.

Dittbenner's fourth-down scramble inside the Chaska 10-yard line set-up a short rushing score for Haley at 14-0.

The Hawks' best chance at points in the first half came as a result of a high snap over the punter's head. Chaska starting its third possession at the Mankato West 36 with two timeouts and 1:32 left before halftime.

A run play was snuffed out on first down before immediate pressure knocked Sanders to the turf, moving the ball back across the 50, and ending any kind of Chaska threat.

The Hawks longest sustained drive came in the first possession out of halftime. Quarterback Brayden Sanders rushed for 11 years and a first down, while also hitting Karver Miller for 19 yards on a 3rd-and-11.

Jack Boyle, who came into the game just shy of 1,400 rushing yards this season, held to 31 in the section final, was able to pick up a key fourth-down run to keep the drive going.

Facing 4th-and-4 at the West 23, Boyle, out of the Wildcat formation, threw the ball rather than run. Mankato West linebacker Brady Haugum read it perfectly, stepping in front of the pass for the interception.

It was the last scoring threat of the game for the Hawks.

Mankato West would score three more times, Dittbenner hitting Peyton Goettlicher and Collins on throws of 35 and 37 yards, while an interception for a touchdown from Hayden Hartman amounted to the final difference.

Max Hatfield, one of nine senior starters on defense, the Hawks with 27 seniors in all, had a team-high 12 tackles. Christian Rolff and Brendan Suhr each had seven tackles with Nolan Kemp making a touchdown-saving pass break-up late in the second quarter.

Mankato West, ranked No. 1 in AAAAA, will play No. 2 St. Thomas Academy at 3 p.m. on Saturday, Nov. 13 at Prior Lake High School in the state quarterfinals. Also on the side of the bracket are No. 3 Andover and No. 5 Rogers.

Scoreless into the final minute of the first half, host Farmington scored in 24 seconds, and never looked back, a 34-0 win over Minnetonka in the second round of the Class AAAAAA Football bracket.

The Skippers finished the season with an 8-2 record.

Rod Finley rushed 23 times for 120 yards and three touchdowns, part of a Farmington running attack that piled up nearly 300 yards.

Finley gave the Tigers a 7-0 lead with 29 ticks left in the second quarter. Minnetonka did not sit on the ball into halftime, rather electing to try and march up the field. A Skipper pass was intercepted and returned 60 yards for a devastating seven points at 14-0.

The Skippers turned the ball over three times in the game, twice in the second half.

Farmington will meet Eden Prairie in the state quarterfinals at Chanhassen High School on Friday, Nov. 12.