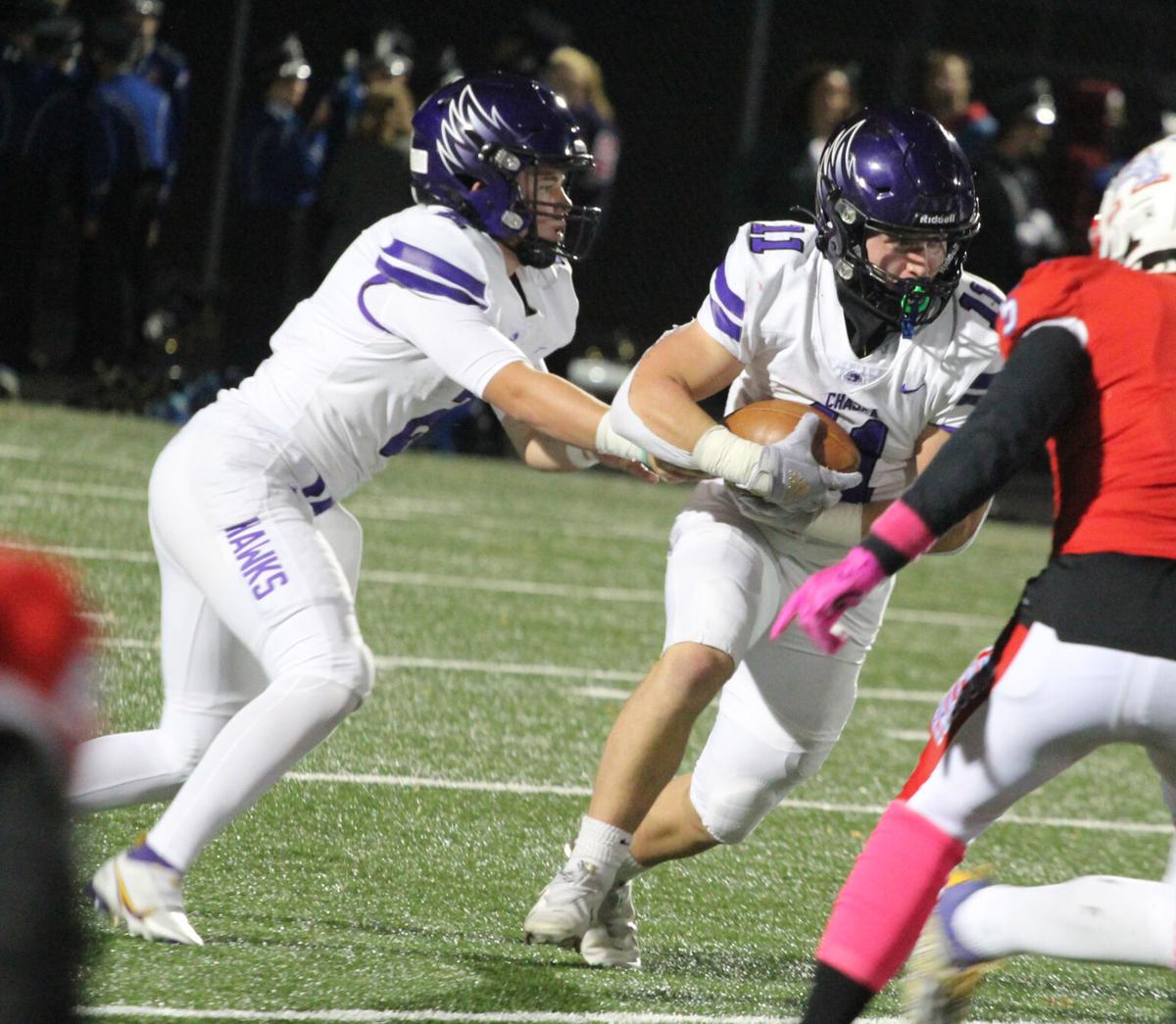 Chaska quarterback Brayden Sanders hands the ball off to running back Jack Boyle, one of 42 rushes for the senior for 166 yards. 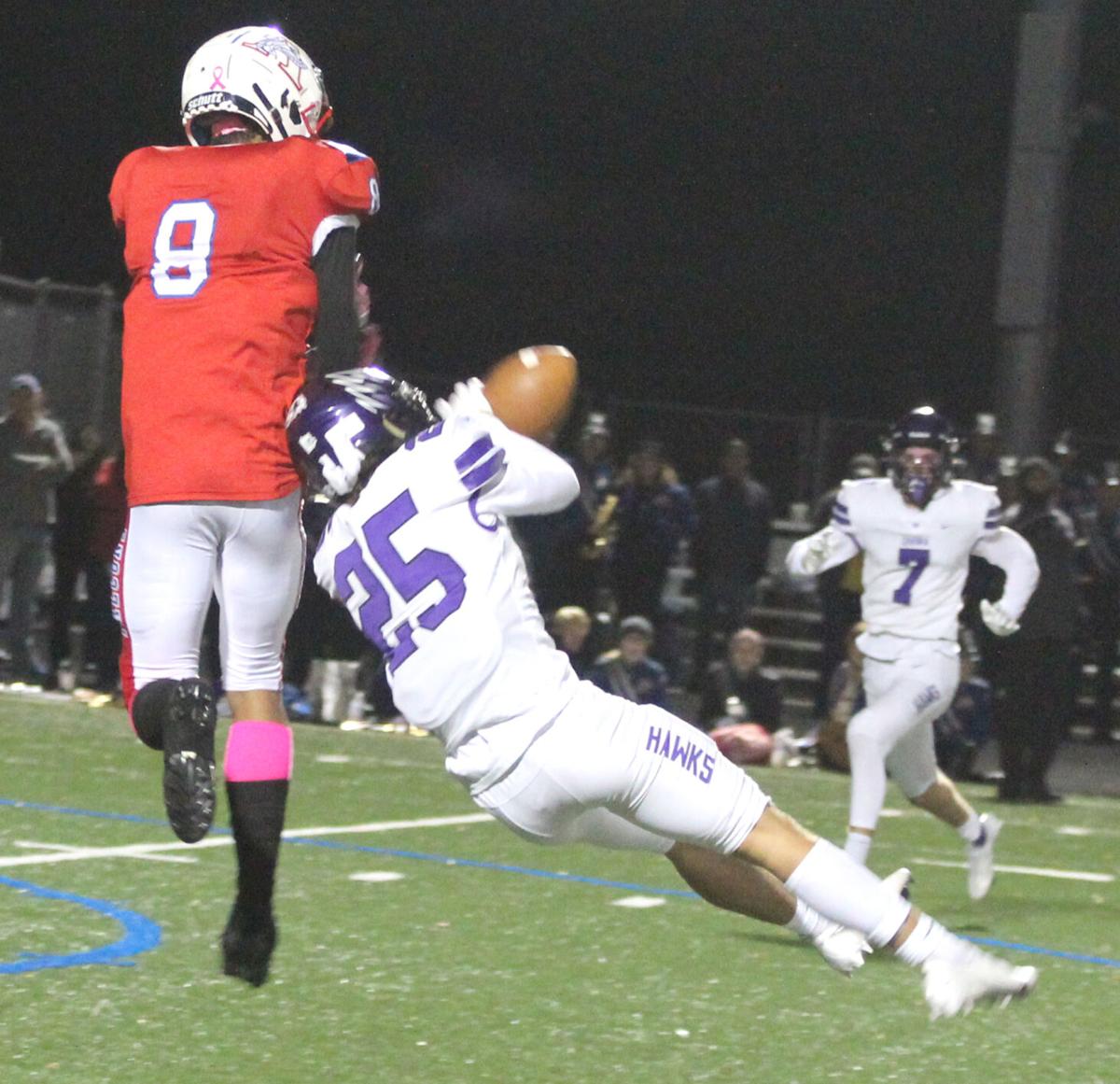 Chaska safety Myles Meiller pulls down a jump ball interception on fourth down, helping seal a 17-6 win over Robbinsdale Armstrong on Oct. 15.

Chaska quarterback Brayden Sanders hands the ball off to running back Jack Boyle, one of 42 rushes for the senior for 166 yards.

Chaska safety Myles Meiller pulls down a jump ball interception on fourth down, helping seal a 17-6 win over Robbinsdale Armstrong on Oct. 15.

In the case of Chaska's 17-6 win over No. 9-ranked Robbinsdale Armstrong on Oct. 15, the Hawks had a heavy time of possession favor, at one point in the second half it was 14:28 to 36 seconds.

Facing a Falcon squad that put up 49 points at Chanhassen and 133 points in a three-game win streak, keeping their offense on the sidelines for roughly 80 percent of the game made stopping them when they had the ball that much easier.

"I look up at the scoreboard in the third quarter and there's like four minutes left and we'd been on the field the whole time. I couldn't believe it. It went by so fast for us. We just kept powering through, chewing up yards," Chaska senior two-way lineman Ryan Mercer said.

Robbinsdale Armstrong ran 33 plays to 66 for Chaska, a 2-to-1 difference.

Up 14-0 at halftime, Chaska marched 51 yards, converting three fourth-down plays, eating up the first nine minutes of the third quarter. And while the drive stalled, it forced the Falcons to start taking chances, not knowing how many possessions they would have.

A halfback pass on just their second play -- their last play -- of the third quarter was badly underthrown, the first of two interceptions for Chaska junior safety Myles Meiller.

When Nolan Kemp kicked a 22-yard field goal through the uprights with 8:56 left, the Chaska offense had been on the field for 14 minutes, 28 seconds, of the second half.

Time of possession in 2nd half
Chaska 14:28
Robbinsdale Armstrong :36

"I know I get more tired when I'm on defense, so I can imagine their defense, being out there that long was feeling it," Mercer said.

Robbinsdale Armstrong did get on the board with 7:19 left, a 38-yard throw from Malone to Marquan Tucker to draw within 17-6 on a missed conversion.

The Falcons caught the Hawks with an onside kick -- Chaska coach Bryan Dahl after the game taking responsibility for not having the hands team on the field.

Down 11 points, momentum on the Falcons side, Chaska needed the defense to come through. And that's what they did, twice forcing Malone to throw as he was falling to the ground. And that was with just two rushers in Reese Turner and Mercer.

A fourth-down heave downfield was pulled down by Meiller with Robbinsdale Armstrong receiver Theo Foryah looking to come over the top of the defender to keep the drive alive.

Chaska was able to seal the win on a muffed punt with sophomore Caleb Schmidt racing down the field and falling on the ball.

"This group is fired up. We have a lot of will power. We just want to keep going. We were down two really good (offensive) linemen and we had guys step up and we performed well. I'm very happy with how we played," said Mercer of the line, which includes Leo Smalley and Zaki Omar as well.

Jack Boyle was battering ram running behind and through the line, most times dragging defenders for extra yards. He rushed a career-high 42 times for 166 yards.

Hot highlight alert again from Karver Miller. Brayden Sanders threw a beauty as he was taking the hit.

"He's a workhorse. He just keeps going. We open up holes for him and he just hits them hard. And when there isn't a hole, he makes one," Mercer said of Boyles.

While Boyle was the focal point of the offense, especially in the second half when Chaska did not attempt a pass, quarterback Brayden Sanders was impactful, both with his arm (5-of-9 passing, 91 yards) and legs (13 rushes, 78 yards), picking up large chunks of yards on multiple drives running the ball.

First-down passes to Andrew Schaffer set-up a 2-yard touchdown run from Sanders with 12 seconds left in the first half at 14-0.

12 seconds left in half. Great drive by Brayden Sanders, hitting Andrew Schaffer with 2 first down throws

Boyle finished off the Hawks' opening drive in the first quarter from two yards out after a diving catch from Karver Miller moved the chains inside the 10-yard line of the Falcons.

While overshadowed by the offensive effort, Chaska's defense continued to shine, holding a team to seven or fewer points for the fifth time in seven games.

The Hawks limited Malone to the pocket, a strong contain from outside backers Ben Bowe and Brendan Suhr, who had five tackles. Christian Rolff knifed through the line often, picking up a sack on the first drive of the game.

"Our defense, it's something special. I really like what we have. We've shutout Chanhassen, Waconia, so we know we had the ability to do something like this tonight. We just had to come out and perform and we certainly did," Mercer said.

Chaska (7-0) completes the regular season at 7 p.m. on Wednesday, Oct. 20 versus St. Louis Park. The Orioles scored 15 points in the final 30 seconds of regulation, including a 2-point conversion to go ahead of Waconia 29-28.