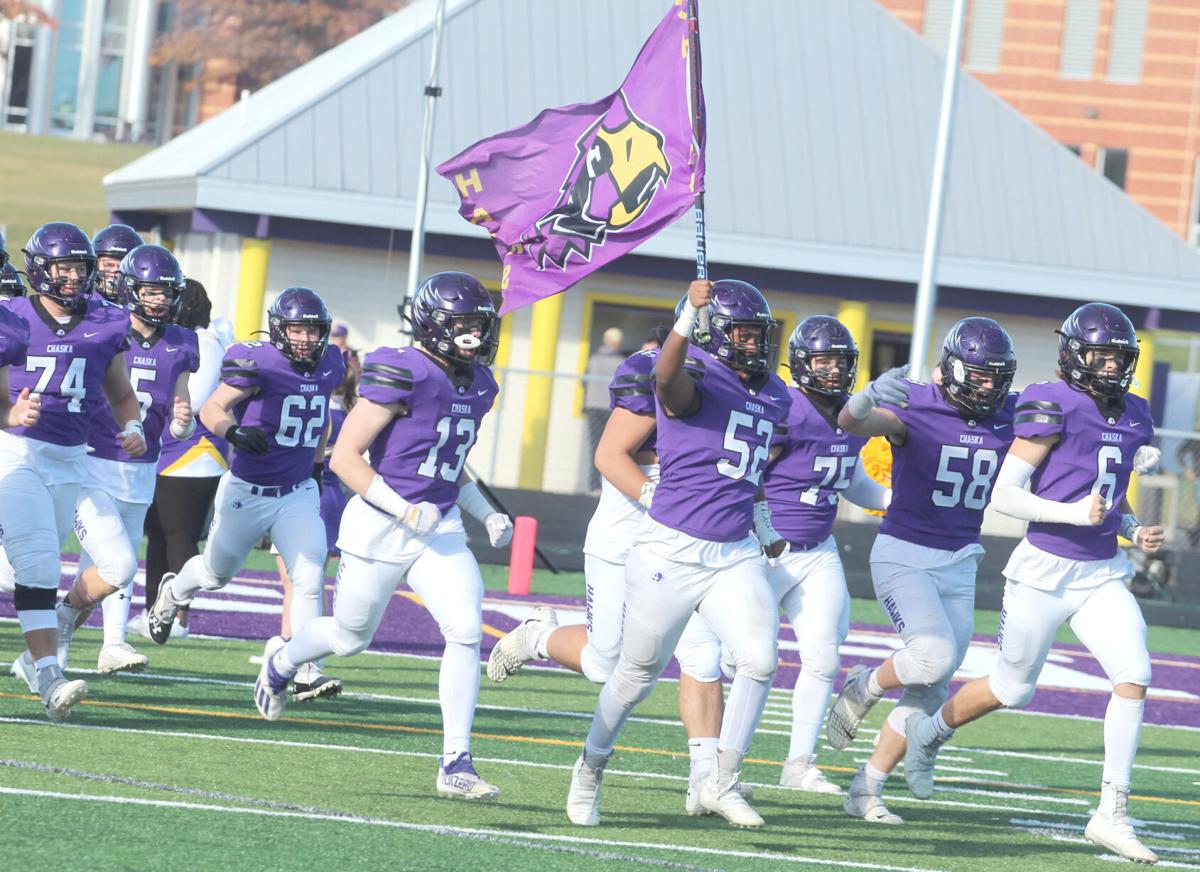 Chaska senior Zaki Omar carries the Hawks flag into the stadium in the Section 2AAAAA playoff opener on Oct. 30, a 17-0 win over Waconia. 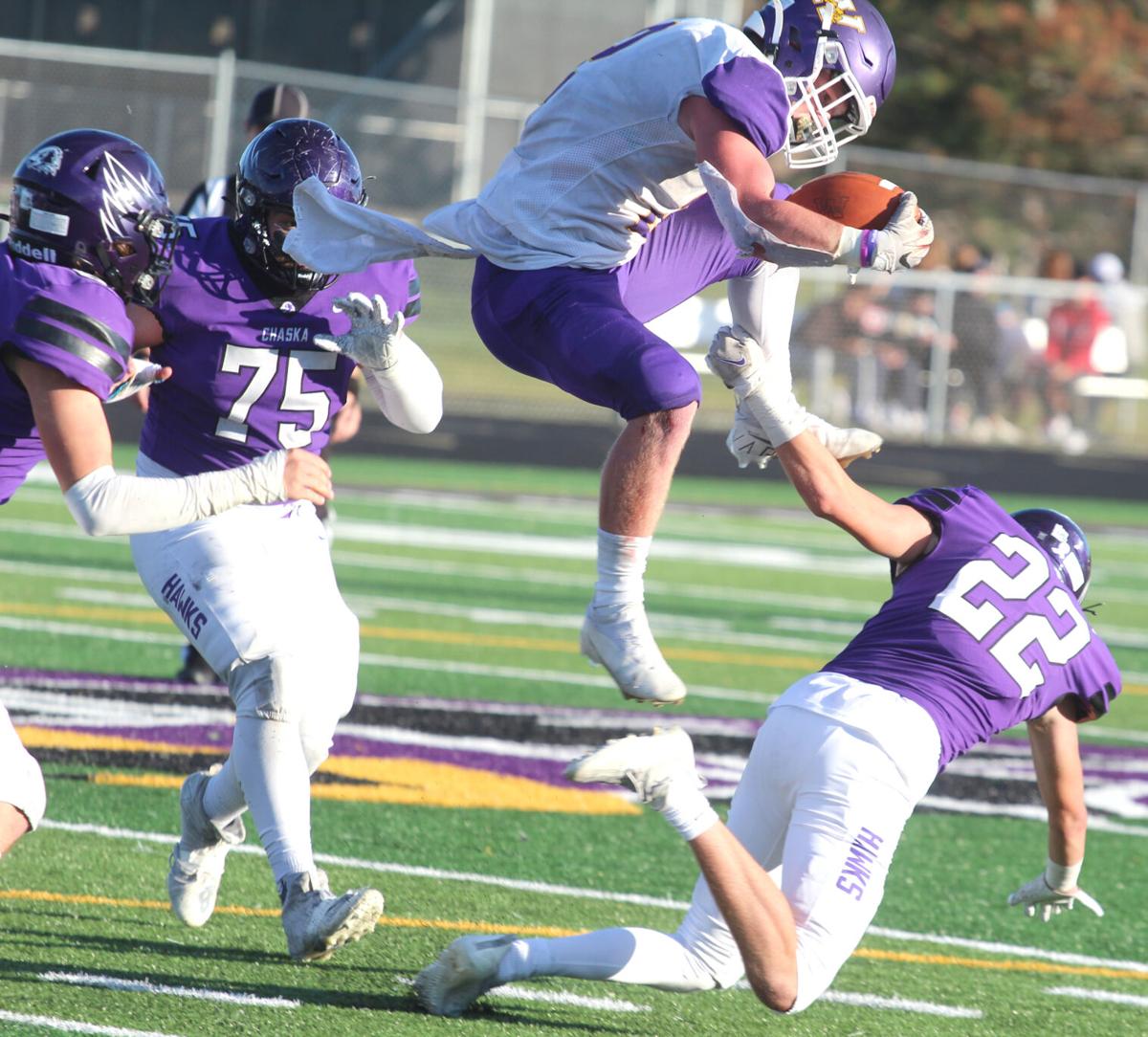 Waconia's Max McEnelly showed his incredible athleticism by hurdling over Chaska tackler Kaiden Rector. While a remarkable play, it is a penalty in high school football. 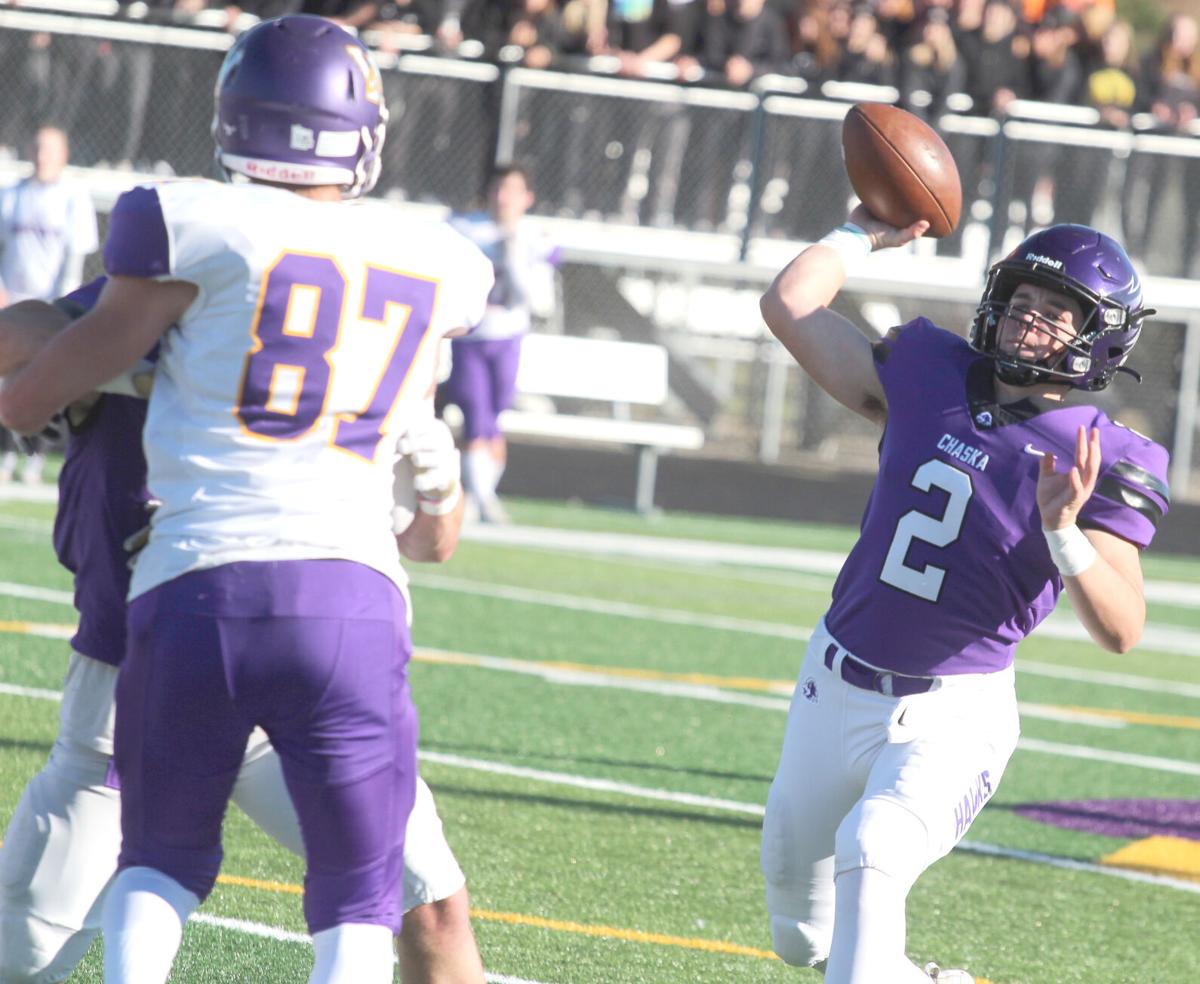 Chaska quarterback Brayden Sanders fires a first-quarter throw in the direction of receiver Colin Dussault. One play later, Sanders hit Andrew Schaffer over the middle for a 7-0 lead. 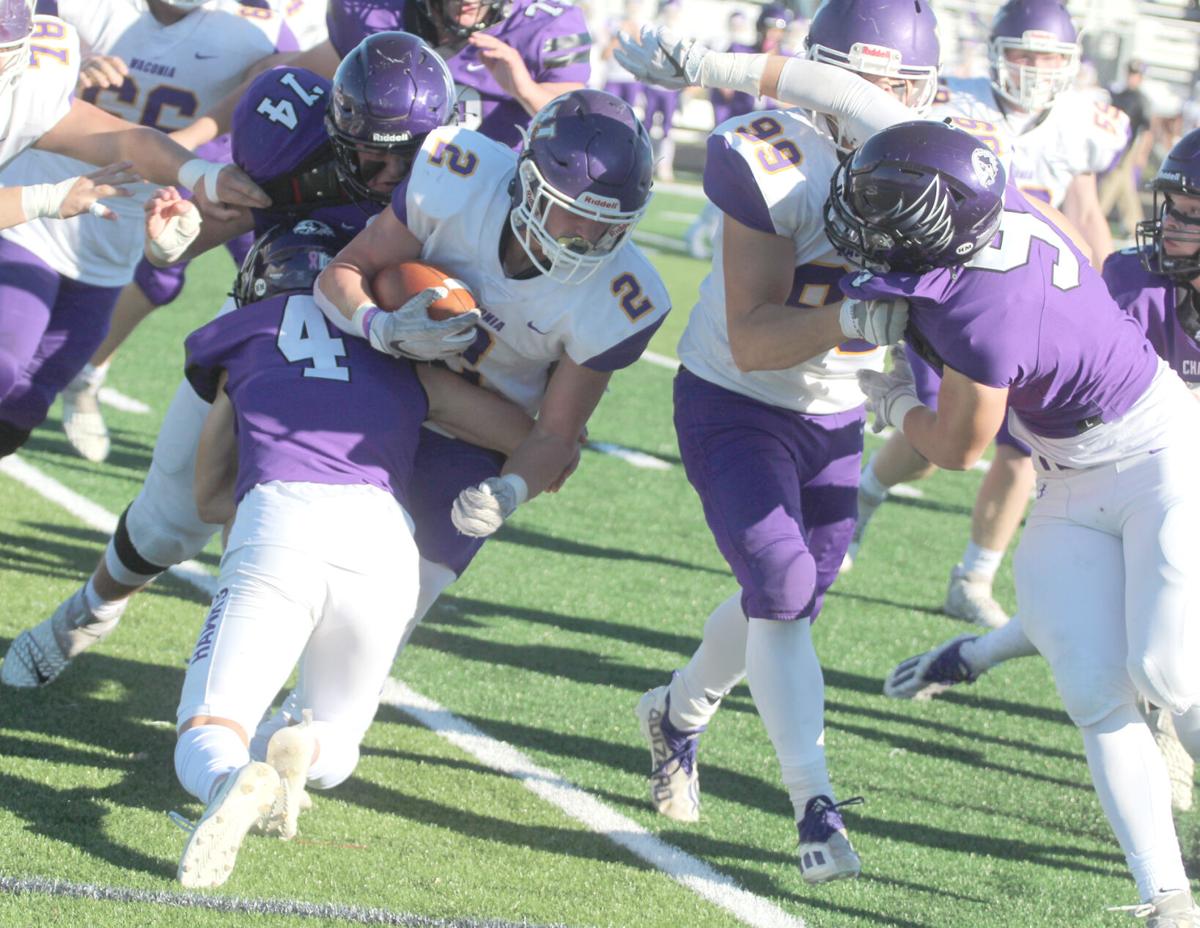 Chaska defenders Karver Miller (4) and Leo Smalley (74) combine to wrap up Waconia running back Max McEnelly for a short gain.

Chaska senior Zaki Omar carries the Hawks flag into the stadium in the Section 2AAAAA playoff opener on Oct. 30, a 17-0 win over Waconia.

Waconia's Max McEnelly showed his incredible athleticism by hurdling over Chaska tackler Kaiden Rector. While a remarkable play, it is a penalty in high school football.

Chaska quarterback Brayden Sanders fires a first-quarter throw in the direction of receiver Colin Dussault. One play later, Sanders hit Andrew Schaffer over the middle for a 7-0 lead.

Chaska defenders Karver Miller (4) and Leo Smalley (74) combine to wrap up Waconia running back Max McEnelly for a short gain.

To shutout a team over four quarters is one thing, do it twice, that's another.

Chaska, unbeaten in the regular season, ranked No. 4 in Class AAAAA, never took the win for granted on Saturday in the Section 2AAAAA semifinals, defeating Waconia 17-0.

Chaska knew what kind of team it was facing. A team that held them scoreless until the final minute of a week-four contest, a 7-0 win for Chaska.

Unlike a 2017 playoff meeting with Waconia, the Hawks also unbeaten at 8-0 into the section semifinals that year, losing 20-10, Chaska didn't sputter offensively early on. Their first two drives led to 10 points.

When the Wildcats were fighting to get back into the game, the Hawks came through with a scoring drive in the fourth quarter to secure the victory.

"I think the message was do what we did before. Shut them out. Bend, but don't break. You're going to give up some yards, but limit big plays. Our coaches had a great game plan, put us in a great position to make plays," Chaska senior outside linebacker Ben Bowe said.

Tasked at stopping, okay, slowing down Waconia running back Max McEnelly was priority No. 1 for the Chaska defense.

McEnelly came into the game with more than 1,400 yards of offense and 16 of the Wildcats' 23 touchdowns. In fact, McEnelly had taken the hand-off in roughly 60 percent of snaps on the season.

McEnelly's 148-yard fourth quarter with two touchdowns and an interception on defense helped Waconia rally from a 12-0 deficit into a 22-12 win over Chanhassen in the section quarterfinals.

And while McEnelly did finish with 116 rushing yards, Chaska never broke, keeping the junior out of the end zone.

"We knew it was going to be tough. There at the end, we were tired, but you have to keep going, because you know that kid (McEnelly) isn't ever going to stop coming at you," Suhr said.

After stopping Waconia on the first drive, a turnover on downs, Chaska marched 66 yards, capped by a 33-yard pass over the middle to tight end Andrew Schaffer from Brayden Sanders.

One play earlier, Schaffer was in the same spot, uncovered, so Chaska, on fourth down, dialed up the same play, and Sanders knew exactly where to look and throw for the 7-0 lead.

Andrew Schaffer was wide open on 3rd and 10, so Chaska runs the same play on 4th and 10.

After a short punt gave Chaska good field position, the team's second drive resulted in a 32-yard field goal from Nolan Kemp, a 10-0 lead early in the second quarter.

Waconia's best scoring chance came in the closing seconds of the first half. Quarterback Austin Randall drove the Wildcats to the 10-yard line, a pass to Sam Koppi ruled a bobble after the receiver was able to get a foot down.

The game clock reset to two seconds, Waconia's field goal attempt was tipped at the line of scrimmage by Chaska's Kaiden Rector, the kick falling short.

Both teams traded possessions in the third quarter, Chaska falling inside the Waconia 15-yard line, while a Wildcat possession was halted with a third-down sack from Hawks' Ryan Mercer.

Safety Trevor Oetter's hit over the middle jarred a fourth-down pass loose of a Waconia receiver to force a turnover on downs in the fourth quarter.

Chaska put together a drive that ate more than four minutes off the clock, totaling 58 yards, with Jack Boyle finding the end zone from two yards out for the 17-0 lead with 3:45 to play.

A Sanders scramble and pass to Karver Miller, who tiptoed the sideline, kept the drive alive with a first-down reception.

Boyle finished the playoff game with 27 carries for 154 yards for the Hawks.

The Hawks' linebacker group, including Max Hatfield and Christian Rolff, all seniors, totaled 31 tackles in the game. Rolff added a fourth-quarter sack to go with a team-high 14 tackles.

It is that group that makes the Chaska defense go. A defense that has allowed opponents to score seven or fewer points six out of nine games.

Of the 16 teams remaining in Class AAAAA, only one team -- Mankato West -- has allowed fewer offensive points than Chaska at 6.4 per game.

"That's what coach (Bryan Dahl) always says. Get better each week. Do something better than the week before. We're always building up for playing our best ball come the playoffs. I really like where we are right now," Bowe said.

Chaska and Mankato West, both undefeated at 9-0, have met in the section championship four times in the last eight post-seasons.

"We were there in 2019, on the sidelines. Those guys were our role models. They still are," Suhr said.

"We're excited to face that great competition. It's going to be a great match-up. I can't wait to see how our guys do," Bowe said.

The contest will be at Todnem Field in Mankato at 7 p.m. on Friday, Nov. 5.

Mankato West has won 15 straight games between the shortened 2020 season and the current campaign, including a 22-15 decision over the Hawks in a one-game playoff last fall.

The Scarlets, ranked No. 1 in state, have outscored opponents 421 to 33 this season. Only three teams found the end zone against Mankato West, with crosstown rival Mankato East playing them tough in week eight, 23-20.

The Scarlets led New Prague 42-0 at halftime en route to a 51-0 win in the other semifinal.

All championships on Friday, Nov. 5 (except when noted)