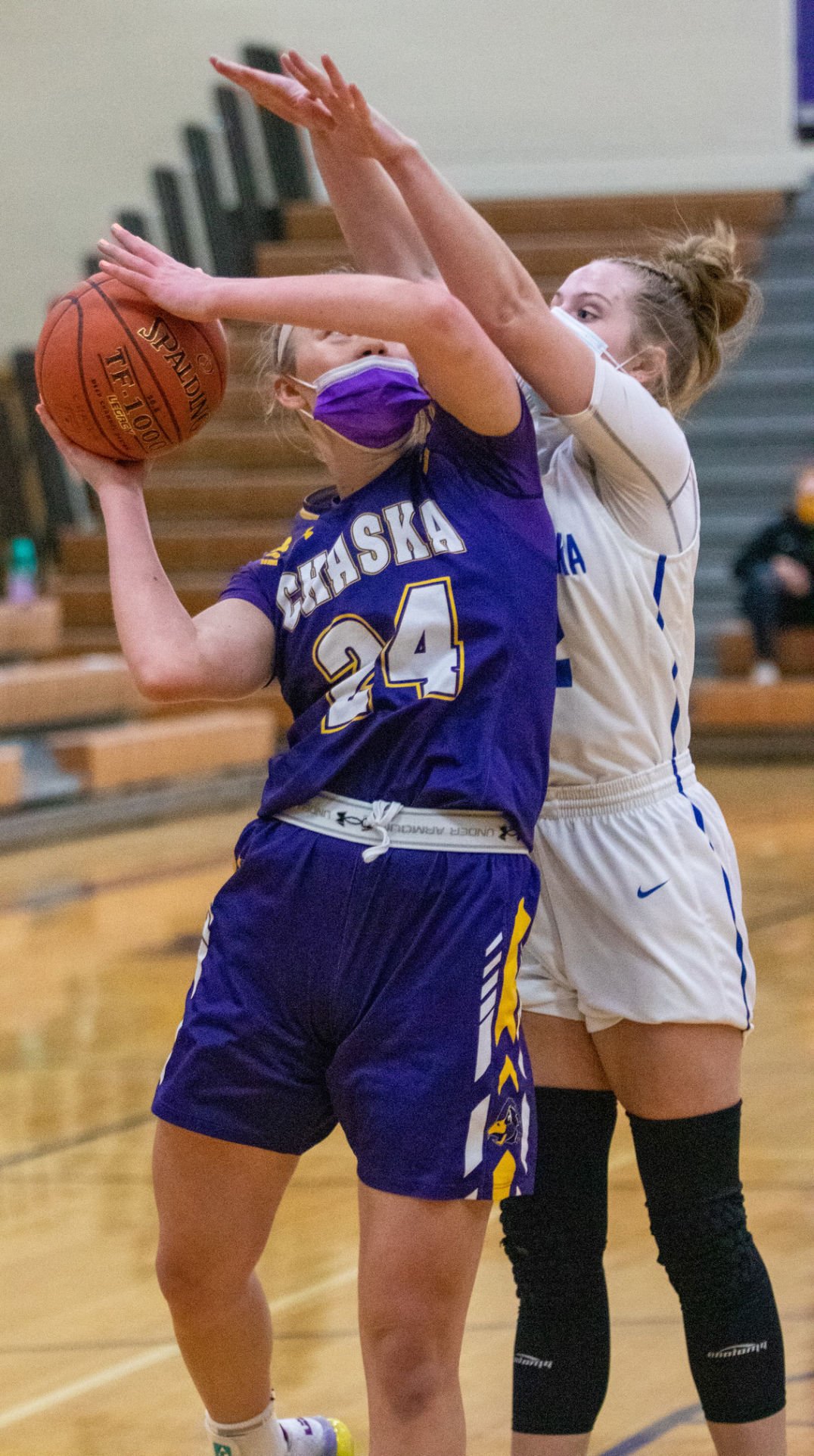 Chaska's Mallory Heyer works inside as Minnetonka defender Piper Terry is blanketed on her. 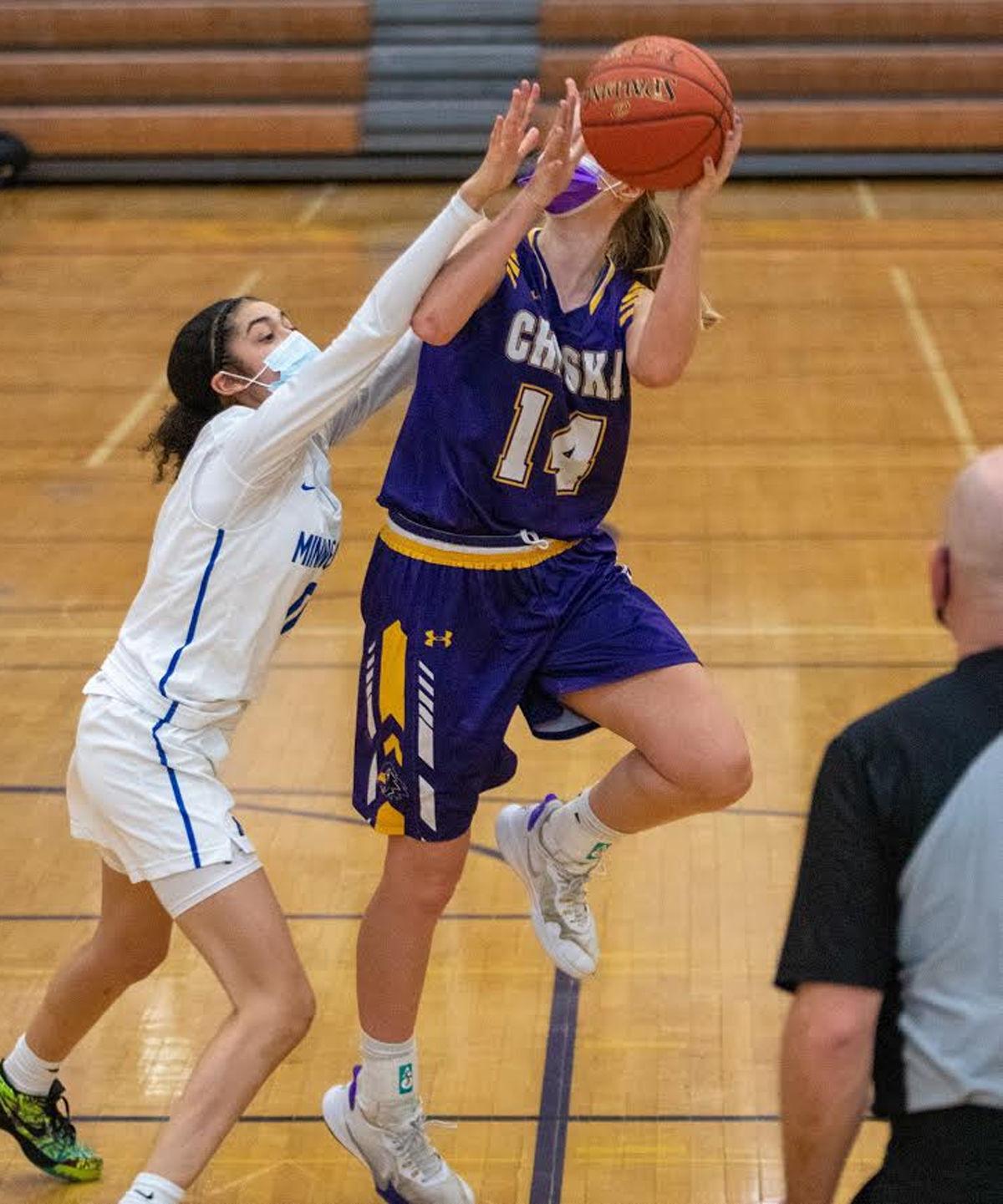 Kaylee Van Eps scores with the left hand in overtime as Chaska held off a strong challenge from Minnetonka in an overtime win Feb. 12. 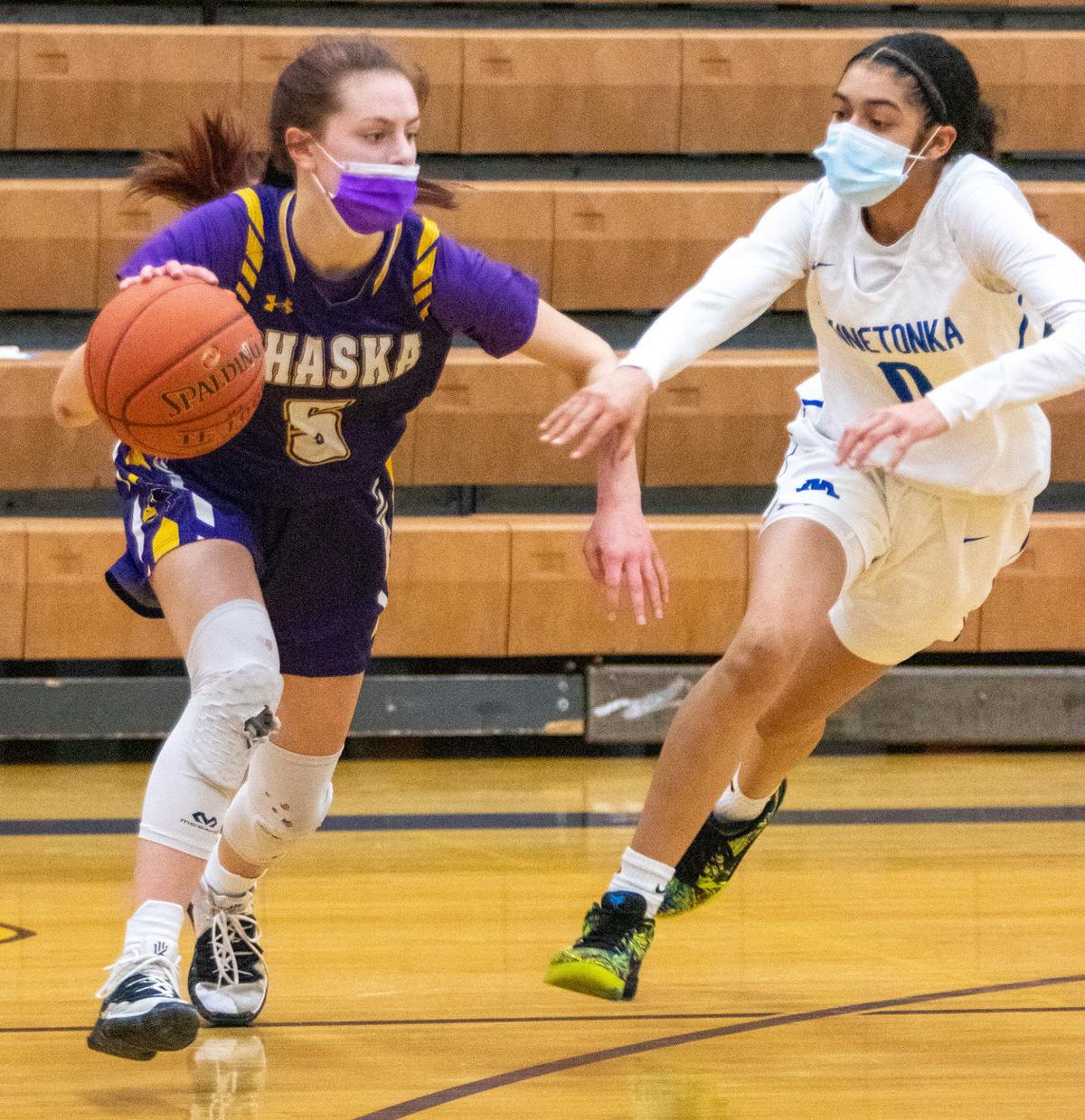 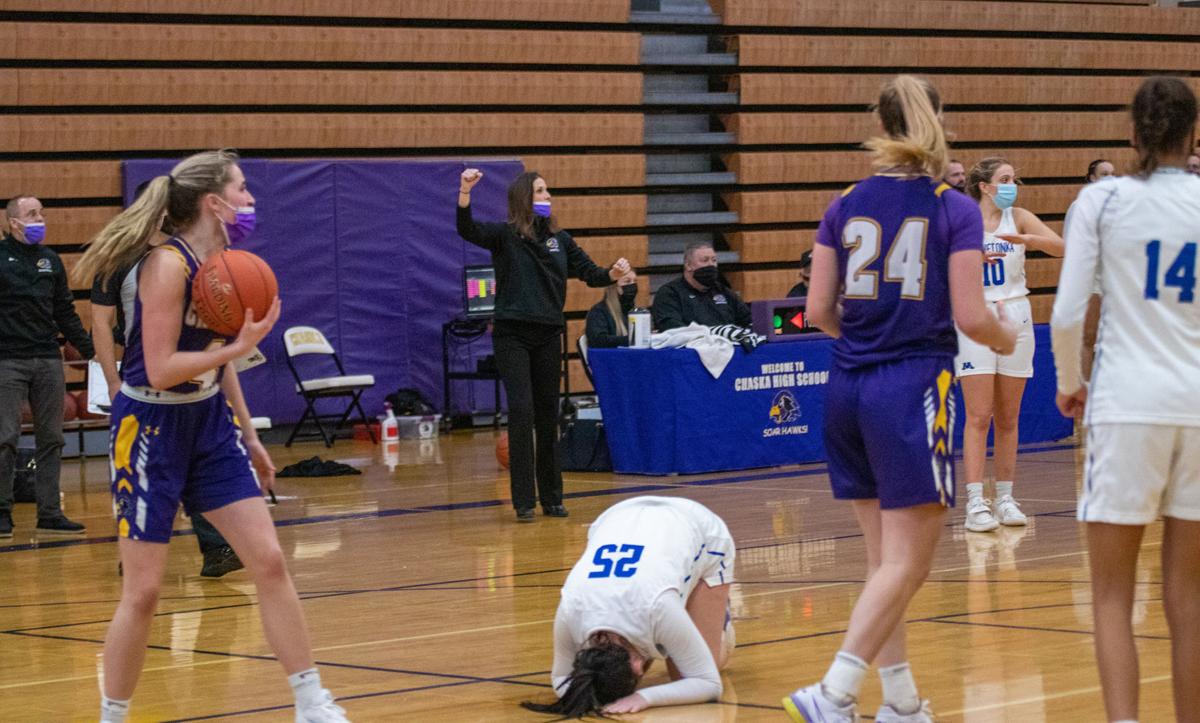 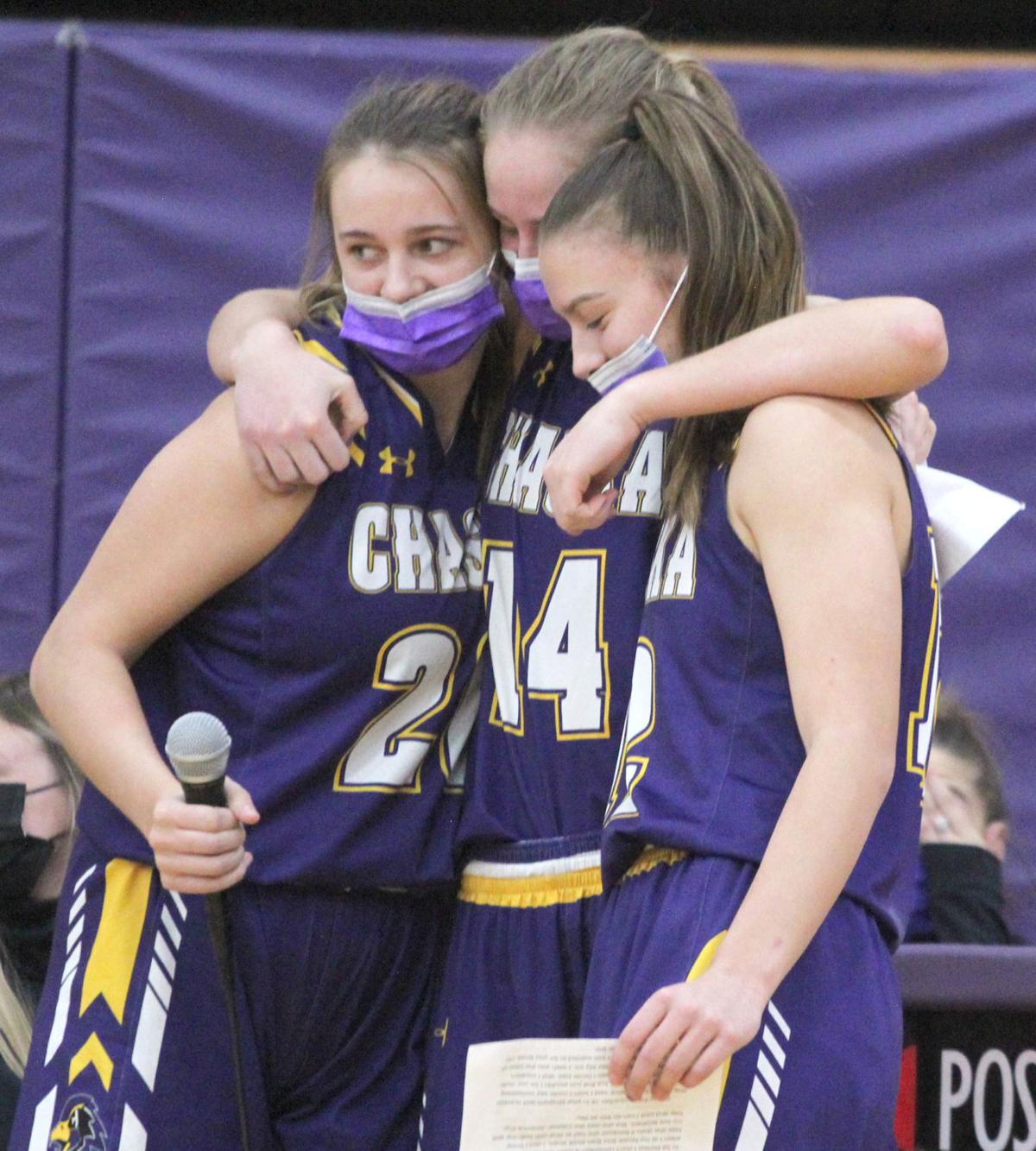 Senior Kaylee Van Eps with a group hug for Chaska teammates Ashley Schuelke and Anna Lenzen following a 71-66 overtime win over No. 6 Minnetonka on Feb. 12.

Chaska's Mallory Heyer works inside as Minnetonka defender Piper Terry is blanketed on her.

Kaylee Van Eps scores with the left hand in overtime as Chaska held off a strong challenge from Minnetonka in an overtime win Feb. 12.

Senior Kaylee Van Eps with a group hug for Chaska teammates Ashley Schuelke and Anna Lenzen following a 71-66 overtime win over No. 6 Minnetonka on Feb. 12.

Next year won't be the same, so making the 2021 season the best it can be is that more important, Hawks coach Tara Seifert summed up.

Friday, Feb. 12, felt about as best it could be for third-ranked Chaska. Having won seven Metro West Conference games in a row by 38 or more points, No. 6 Minnetonka gave them the fight they needed.

The Skippers gave Chaska the first-half deficit that needed a response.

The Skippers gave Chaska a full 36-minute, back-and-forth contest, that needed four more minutes of overtime to decide the winner.

The Skippers showed Chaska the Section 2-4A tournament in March is going to be a state-tournament type atmosphere.

"We got off to a slow start, but I really think that helped us become more focused. Getting behind, it was an awakening for us. We really had to stick together. We haven't been pushed like that this year and honestly I think all of this will be good for us," Chaska senior captain Kelsey Willems said.

A grueling 36 minutes of regulation, Chaska amazingly scored on all seven offensive possessions of overtime to defeat Minnetonka 71-66.

"There's this great connection between us. I've played with Kaylee (Van Eps) since fourth grade, and Kelsey since eighth grade. It's great to have this time together. To have the type of friendship we have on and off the court," said Chaska senior captain Kayla Hendrickson of her classmates.

Back and forth all second half and overtime, the Skippers claiming leads on 3-pointers from Ki'ani Lockett and Ellah Durkee, Chaska had an answer each time down the court.

A pass from Kaylee Van Eps to a backdoor cutting Kennedy Sanders evened the game at 64 following inside makes from Mallory Heyer and Van Eps.

After Tori McKinney gave Minnetonka the lead once again at 66-65, Heyer got inside position, finishing with the left to regain the advantage for Chaska at 67-66.

The Skippers got an open look from outside with under a minute to play, but the shot was short, Van Eps tying up the ball with a Skipper player. Van Eps added two free throws on a Minnetonka foul before clinching it in the closing seconds.

Minnetonka's last chance with under eight seconds to play, down 69-66, from Lockett was off the mark.

Van Eps, one of the four players and team manager honored after the game, finished with 13 of her 18 points in the second half and beyond. Heyer also was big down the stretch, 16 of her game-high 22 points over the final 22 minutes.

Fantastic game, headed to OT. Our @MSHSL_Officials did a great job talking & making the correct call, ball appears to still be in Heyer’s hand when basket lights up. @MSHSLjohn https://t.co/lUbINwKqRs pic.twitter.com/Za5o20wPRt

"This was a big game for us. A step in the right direction toward sections, hopefully state. I think tonight showed that when we work as a team, when we can play to our abilities, we can make good things happen," Hendrickson said.

Winning margins between 38 and 64 points through seven games, Chaska needed a test, and they expected to receive one from Minnetonka, which took top-ranked Hopkins to the wire in a one-possession loss last month.

The Skippers used a fast start, grabbing a 23-12 lead, with eight first-half points from Durkee. Chaska, though, answered, chipping away. Willems' 3-pointer, the first make in six attempts for the Hawks, pulled Chaska within 25-22.

"Whatever I can do to help us win. We started playing better defense after that, getting more touches, making it tougher on them to score. That entire stretch coming back from double-digits down was a team effort," Willems said.

Minnetonka took a 29-26 lead into halftime on a 3-point play from Desiree Ware, who shared a team-high 16 points with Durkee.

Chaska took its largest lead at 46-41 on a Kendall Karrmann 3-pointer, but a pair of Ware inside finishes and a Sophie Haydon scoop lay-up, part of a nine-point second half before fouling out, tied the game at 48.

A Ware 3-pointer evened the contest once again at 54 before a pair of Lockett free throws gave them the lead at 56-54 with under 90 seconds to play. Two Van Eps free throws and a Heyer make inside put Chaska up 58-56, the tying scores for Minnetonka from Durkee at the free-throw line.

"Their guards are very good," said Willems of Minnetonka. "They really made our defense work all night. We had to communicate with one another, make sure we weren't leaving anyone wide open."

Lockett and Haydon added 11 and 10 points for the Skippers, which suffered just its second loss in nine games, its seventh on the road.

Sanders scored 17 for Chaska, 10 in the first half, including six free throws, with Karrmann and Willems adding seven and five points.

"We knew it was a night to honor us seniors, but we had to focus on the game first. Come out win and keep the celebration afterward in a happier mood," Willems said.

"It was the perfect night. We had such great competition with Minnetonka. They're a very good team. That's a good section match-up and really either team could have won. We're really happy we came out on top," Hendrickson said.

Chaska (8-0) jumps back into Metro West Conference play the next three games, first at Chanhassen on Tuesday, Feb. 16, with Wayzata, Hopkins and Waconia, all top-10 teams, left to play.

Minnetonka returns to the court on Saturday in a rescheduled contest with Buffalo from Tuesday, Feb. 9. Tip-off is 5 p.m.