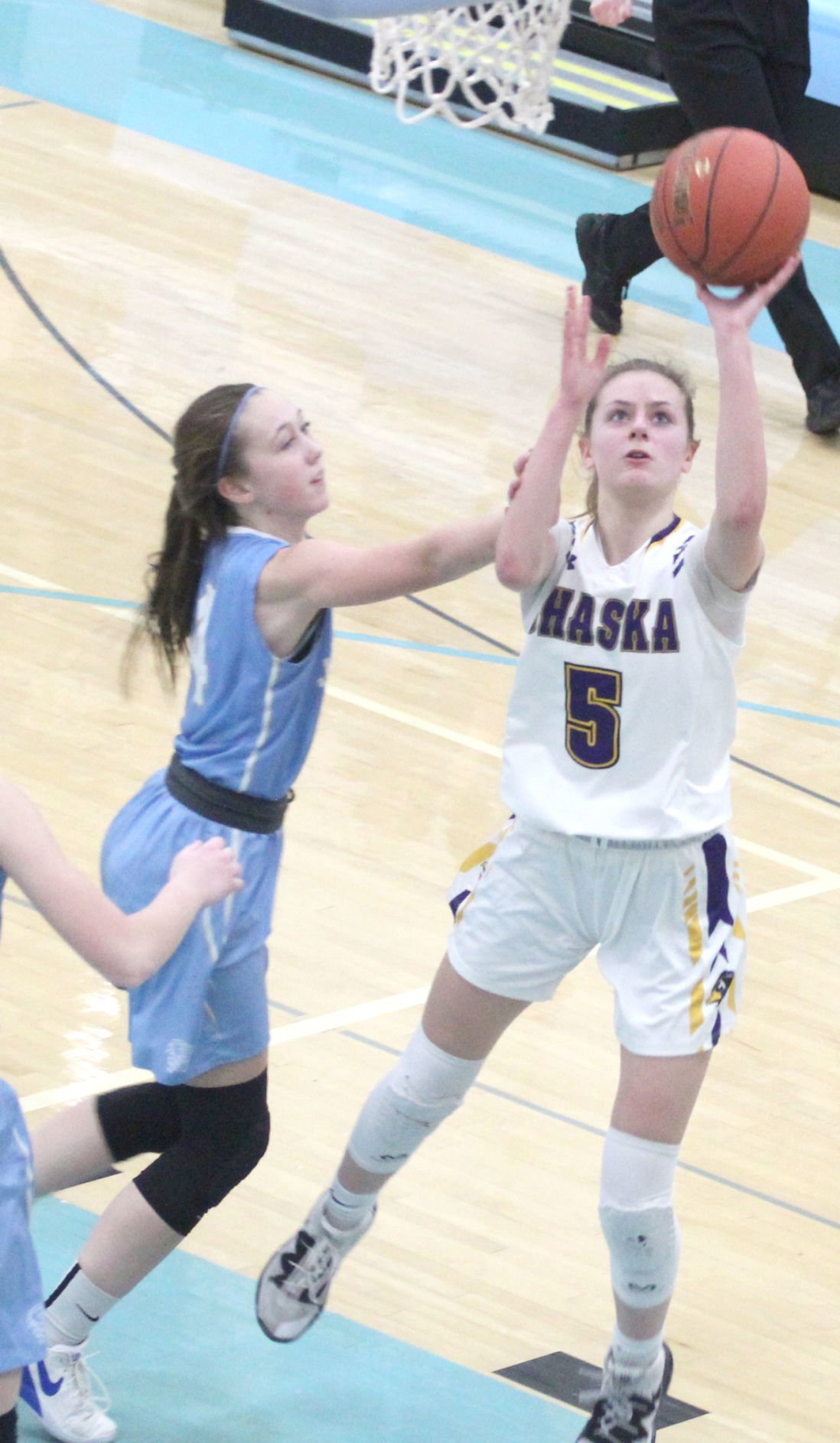 Kelsey Willems finishes a fast-break lay-up off a Kaylee Van Eps steal and assist in the first half of Chaska’s road win at Bloomington Jefferson Jan. 10. Willems netted double digits for the second straight game with 11 points. 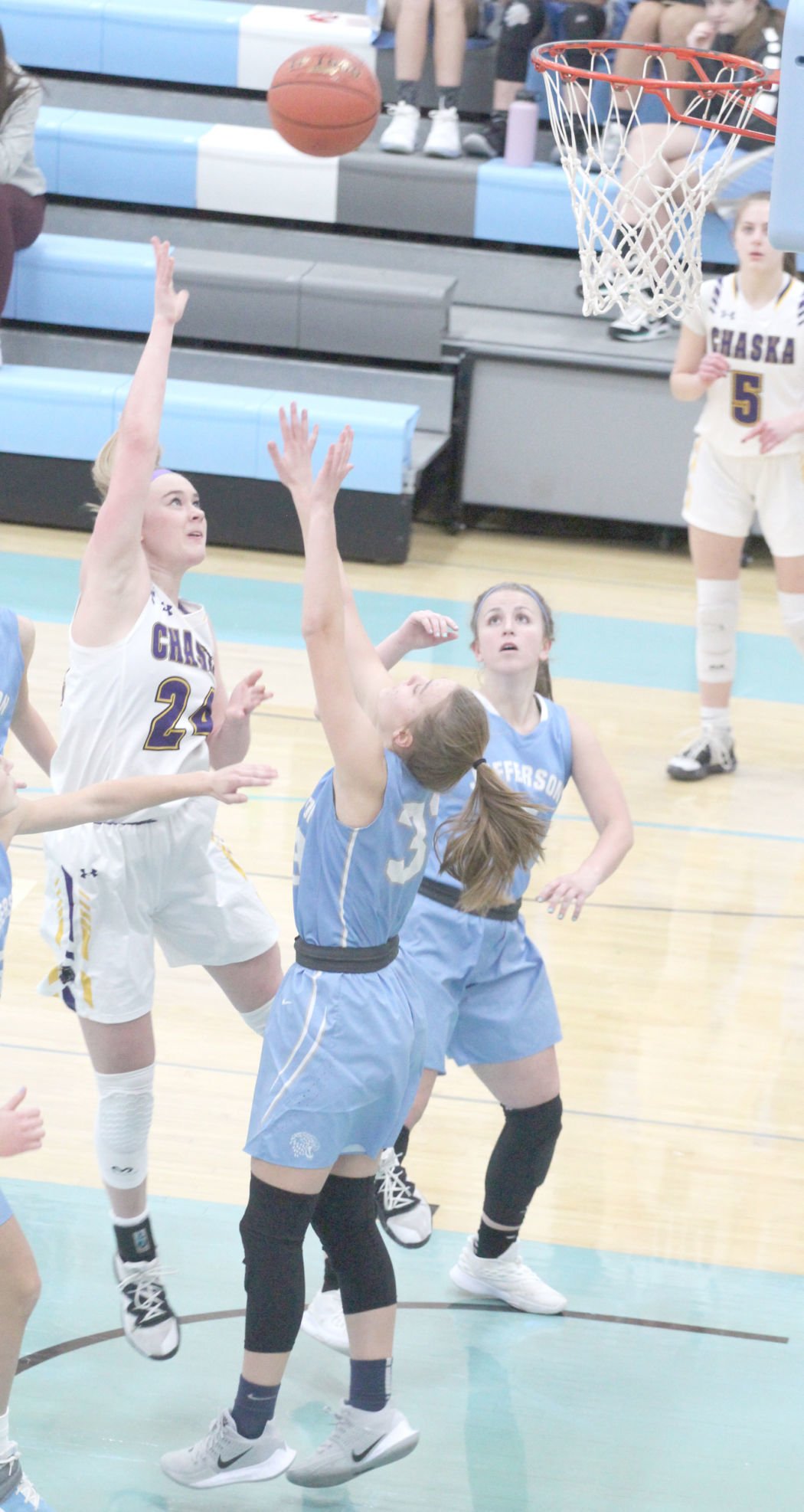 Mallory Heyer with a sky hook in the lane in the opening minutes for Chaska at Bloomington Jefferson on Jan. 10. 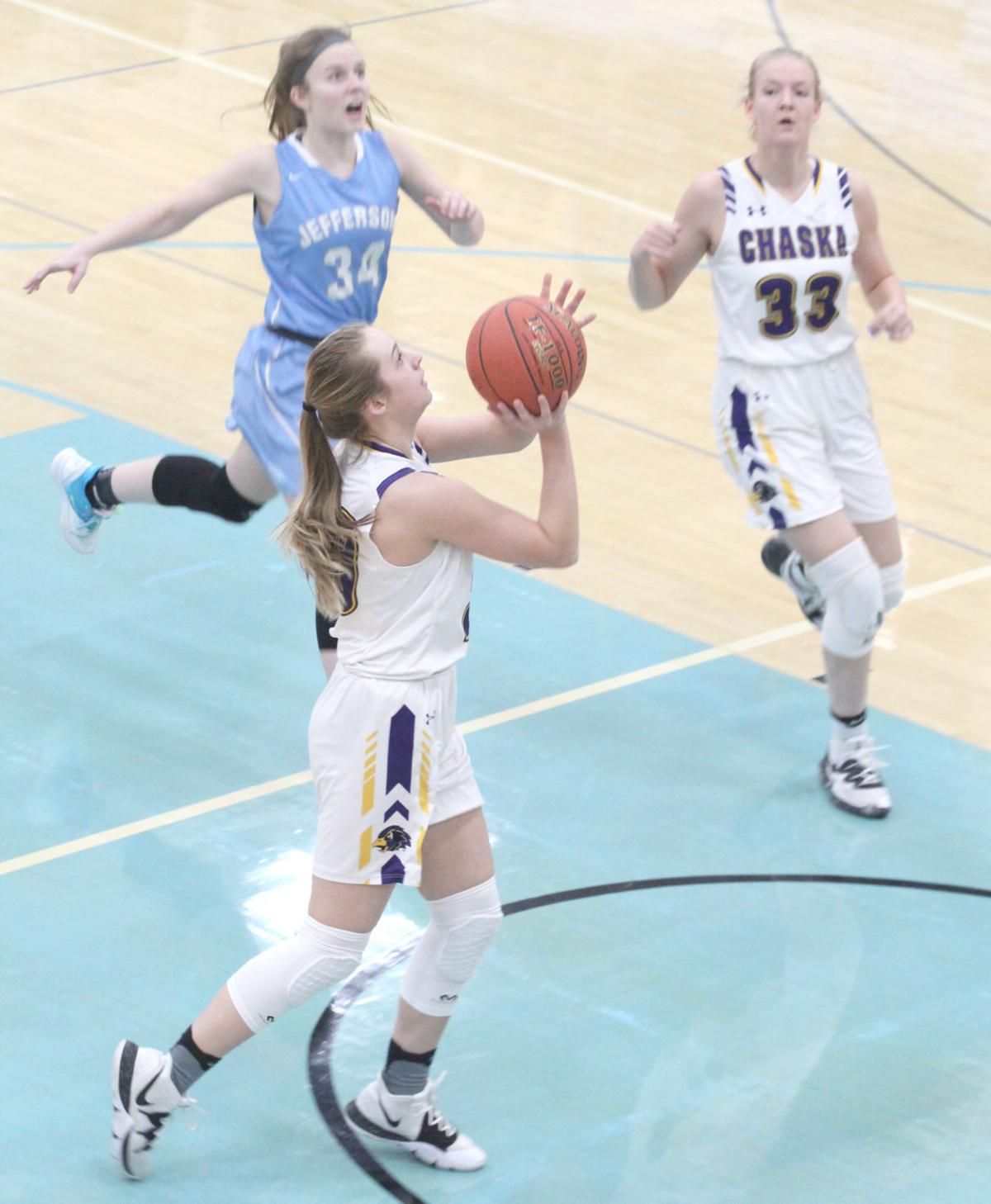 Ashley Schuelke continues to produce for Chaska, recording double digits off the bench, sinking a pair of 3-pointers.

Kelsey Willems finishes a fast-break lay-up off a Kaylee Van Eps steal and assist in the first half of Chaska’s road win at Bloomington Jefferson Jan. 10. Willems netted double digits for the second straight game with 11 points.

Mallory Heyer with a sky hook in the lane in the opening minutes for Chaska at Bloomington Jefferson on Jan. 10.

Ashley Schuelke continues to produce for Chaska, recording double digits off the bench, sinking a pair of 3-pointers.

Early in the season, Chaska relied on its three returning starters, Mallory Heyer, Kaylee Van Eps and Kennedy Sanders while the rest of the team caught up.

Losing seven seniors from a 20-win team, the Hawks have seen a new group of players step into increased roles.

Kelsey Willems, junior captain, was on the bench last season. She watched Chaska find success, knock off top teams. Willems saw a brand of basketball that starts with pressure defense, transition offense next.

Now she's part of that brand. Front and center in the starting line-up.

"Knowing how many people were graduating, I knew I'd be put into a bigger role. So, I prepared it all last summer. I worked out almost every day. Worked on my shot. Doing everything I could to be ready for this season," Willems said.

The same could be said about freshman Ashley Schuelke. Over the last eight games, she's averaging eight points per game.

Having those complimentary numbers to Heyer (18.6 points per game), Sanders (12.9 ppg) and Van Eps (12.1 ppg) has Chaska taking the next step at the midway point of the season.

The Hawks have won eight of the last nine games, the lone loss to No. 1-ranked Hopkins 89-70.

"We played a little together during the summer. Gained some experience. But I'd say the first three, maybe four games, we were getting used to playing with each other. Our team is still so young and I think we're definitely more comfortable as one team now," Willems said.

Willems comes from a basketball family. She's played as long as she can remember. In years past, she was in the gym watching her older sister, Kylie, who now is a freshman at Waldorf University.

What made the Class of 2019 so special for Chaska was their unselfishness. They were great teammates. All with a role. Kelsey saw that in her sister, and her classmates, and it's something sticks with her and others now.

"Even though she was never the main scorer, she did so many things on the court. Grabbing rebounds, getting the loose balls. Those hustle plays. Plays that get your team going. She was always getting assists, making her teammates better. I definitely saw that and learned from it," Willems said.

Late last month, Heyer and Van Eps each recorded point No. 1,000 for their careers in the same game at the Park Center Holiday Tournament. A special moment for those two girls and their families, but also the Chaska team.

"I can't even tell you how hyped up we were for them. We're like a family. I felt just as happy as I were to score my 1,000th point. They are both amazing players and for both to get it in the same game was really cool. They both deserve it," Willems said.

The Hawks hit eight 3-pointers in the contest, including a 5-of-6 performance from Sanders, who had a game-high 19 points.

Judea Montoya, the lone senior on the Hawks' roster, hit a free throw and converted a coast-to-coast lay-up before time expired for her first varsity basket.

Bloomington Jefferson, with one win this season, made just three field goals over the first 18 minutes, finishing with six for the game.

Chaska has a back-to-back with a 2 p.m. contest on Saturday, Jan. 11 at 10-win Maple Grove. It's those highly competitive games the Hawks really get up for.

"We know when we come into a game we have to be prepared. Yeah, you're more hyped for a team like Maple Grove, but a game like tonight, we can't overlook teams. We have to have the same kind of energy no matter who we play. We're really excited though for the challenge (Saturday). We have to be ready or otherwise we're going to have a wide awakening," Willems said.