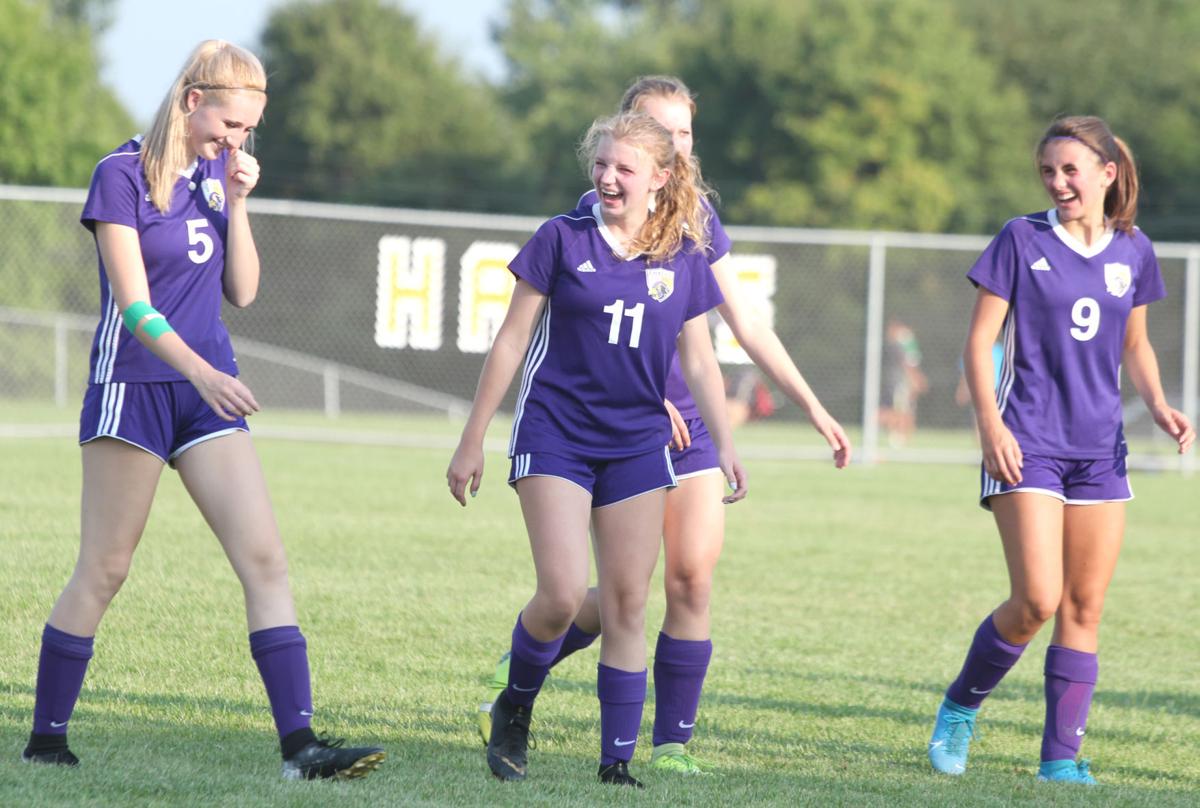 Chaska soccer players Rylie Jorgenson, Kathryn Kroese and Abby Neisen enjoy a laugh during warm-ups for the second half in the Aug. 27 season opener. All agreed, being on the field, playing the game, was super exciting. 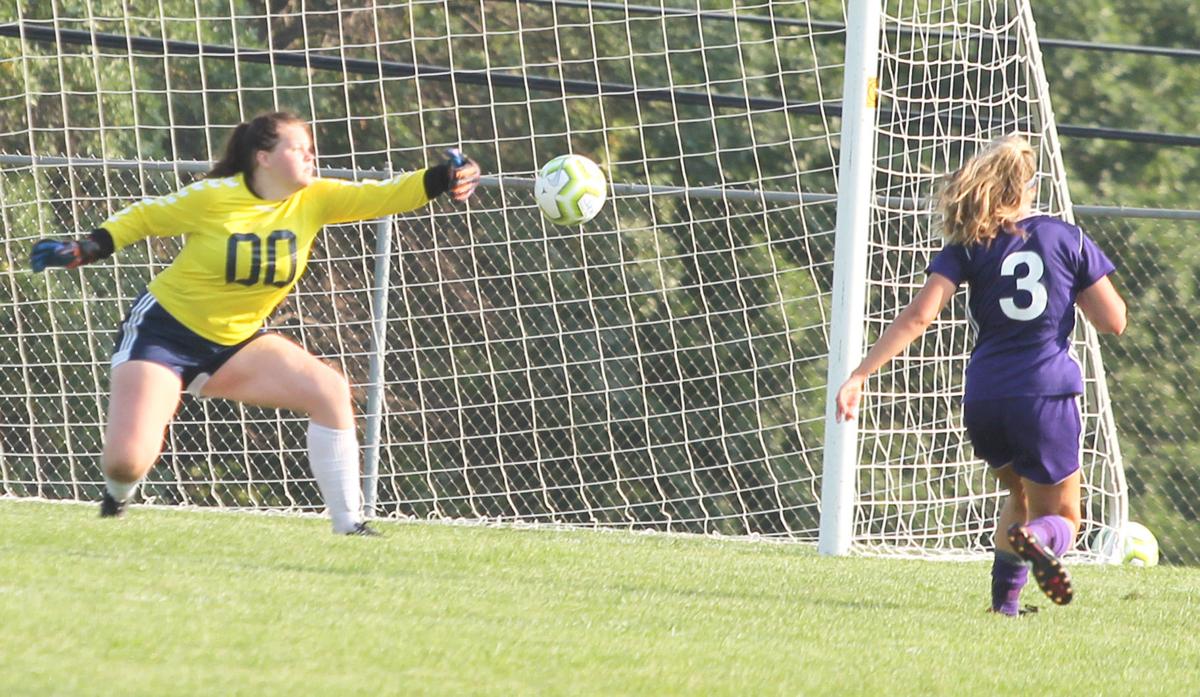 Sophomore Maddy Davey beats the Bloomington Kennedy goaltender with two seconds remaining in the first half for a 2-0 Chaska lead on Aug. 27. 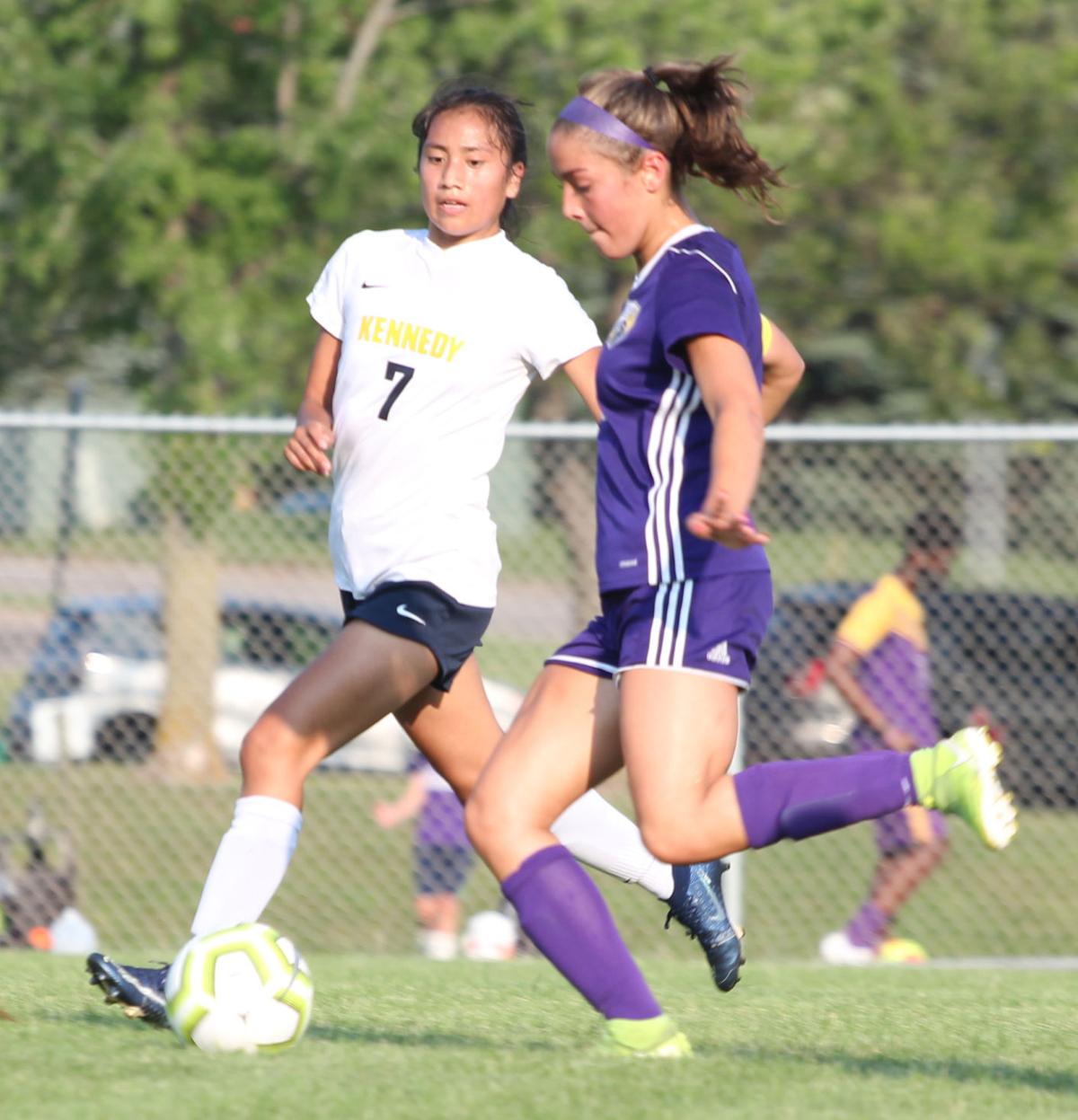 Chaska senior Sammie Ramboldt takes a pass from Paige Bakke in the penalty box, scoring on a shot off her left foot for the 3-0 lead on Aug. 27. 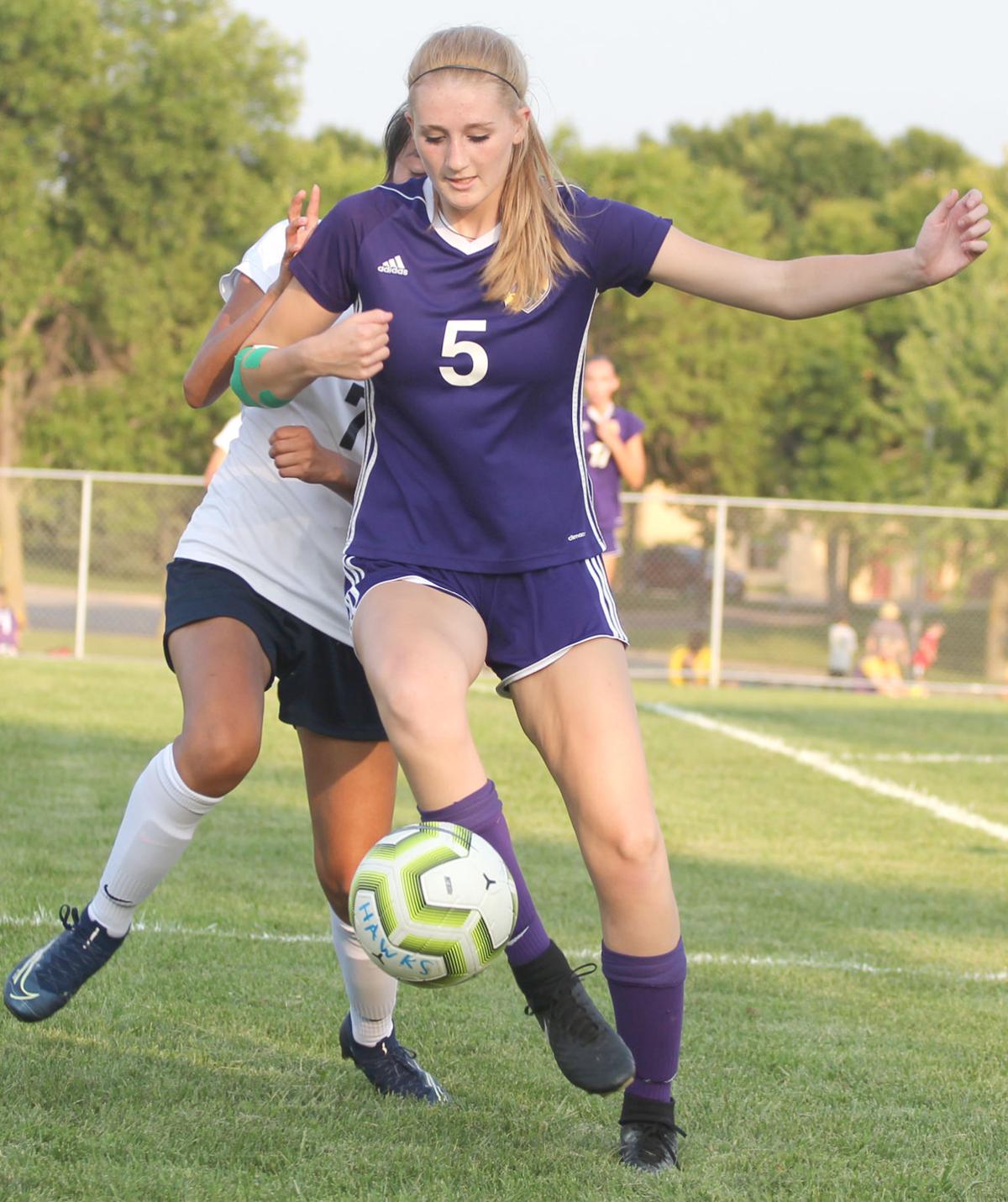 Rylie Jorgenson works for possession in the second half for Chaska in a match with Bloomington Kennedy Aug. 27.

Chaska soccer players Rylie Jorgenson, Kathryn Kroese and Abby Neisen enjoy a laugh during warm-ups for the second half in the Aug. 27 season opener. All agreed, being on the field, playing the game, was super exciting.

Sophomore Maddy Davey beats the Bloomington Kennedy goaltender with two seconds remaining in the first half for a 2-0 Chaska lead on Aug. 27.

Chaska senior Sammie Ramboldt takes a pass from Paige Bakke in the penalty box, scoring on a shot off her left foot for the 3-0 lead on Aug. 27.

Rylie Jorgenson works for possession in the second half for Chaska in a match with Bloomington Kennedy Aug. 27.

The smiles on the faces said it all. Even without goal celebrations. Even with spectator limitations. Players sitting on spaced out lawn chairs instead of the bench. It was soccer, and fourteen Chaska players were wearing their purple jerseys.

In a time of so much uncertainty as students across the state of Minnesota, the country, prepare to begin the school year, the bit of normalcy, the game of soccer, was something everyone was excited to see, to feel, to hear once again.

"Right before tryouts, even maybe a little bit before that, when things started to get worse, I wasn't sure we'd be able to have a season. So to have my senior season, even with the different rules, all the little tweaks we had to make, it really is exciting being out here," Chaska senior captain Sammie Ramboldt said.

Ramboldt understands the appreciation expected from all fall sport athletes in season right now. Counterparts in football and volleyball, a sport her older sister, Makayla, played four seasons of varsity in at Chaska, are left waiting, hoping for their season next spring.

"I feel super grateful that we're able to play. I know friends on those teams that are disappointed, so for us to have something this fall, I really appreciate every minute of it," Ramboldt said.

Spectators were spread out throughout the soccer complex. Some even outside the east fence, no voucher available to enter the facility. Masks were prevalent, including those not in the game, coaches, and during halftime and after the contest.

A last-second goal in the first half brought out a reminder from Chaska coach Steve Vuolo of no celebration. Before the second half, Vuolo stated, "Bring it in." Then correcting himself with a not too close.

On the field, with so many returning pieces, the result was what was expected. A Chaska team right there the last two seasons in the Metro West Conference title chase, easily winning 4-0 over Bloomington Kennedy.

A win, yes, but with much more left to work on for future games.

"Maybe a six out of 10. I think we have room for improvement. Always. As far as defense I was glad to have a shutout," Chaska senior captain Abby Rogers said.

"I'd say about the same. A five or six. I don't think we played anywhere near to our full potential. Some nerves with the first game. But it was good to get a win," Chaska senior defense Abby Neisen said.

Already a 2-0 lead at halftime, Chaska pushed the pace in the opening 10-15 minutes, resulting in a pair of goals.

Rogers bodied down a potential through ball, feeding Paige Bakke down the right side. Her cross into the box found the foot of Ramboldt, beating a Kennedy defender and eventually the goaltender with a left-footed strike for the 3-0 advantage.

Bakke, one of three new starters in 2020, hit the crossbar in the first half, but she didn't miss later on, taking a through pass from Kinley O'Connor up the middle of the attack for the 4-0 lead.

The most critical goal, though, came with two seconds left on the clock in the first half.

Goaltender Jenna Williams's heads up feed up field to defender Neisen started a scoring play in a matter of 10 seconds. Neisen delivered a pass over the top of the Kennedy defense, Maddy Davey winning the race to the ball, the right-footed connection finding twine right before the horn blew.

Our @CHSgirlsfutbol takes 1-0 lead off a blast from Lily Esping from about 25 yards out, then Madeline Davey nets this shot right before half! 2-0 Hawks over Kennedy at half. pic.twitter.com/YcM01kopv5

"We have such a strong defensive group that has played so long. We understand that plays can start with us in the back. The pace starts with us. Scoring goals is a total team effort and that happened today," Neisen said.

Lily Esping started the scoring for Chaska in the 34th minute, a long shot, from 30 yards or so, right under the crossbar for the 1-0 lead.

"It was a great way to start the season, get everyone pumped up for the season ahead," Ramboldt said. "We're super close, us seniors. Even the juniors, some of them are on the team for a second year. We have a lot of fun together."

Chaska is back in action at home at 11 a.m. on Saturday, Aug. 29 versus Bloomington Jefferson.

Goals have been at a premium in recent years in matches against Robbinsdale Cooper, including a 2-1 loss in 2019.

So getting goals from five different players, points from an additional three, in a season-opening 6-0 win at Robbinsdale Cooper was exactly what the Storm were hoping for.

Kennedy Beld scored twice, once in each half, as Grace Fogarty and Haley Von Rentzell added first-half scores and assists as well.

Graduating nine players, many part of back-to-back Section 2AA titles, a Class AA State Championship in 2018, Minnetonka will lean on some new faces this fall playing in the ever-challenging Lake Conference.

On Aug. 27 in the season and home opener, it was mix of experience and newcomers that led the Skippers to a 4-0 win over Buffalo.

Lissa Mizutani, who recently committed to Division I University of St. Thomas, picked up assists on both first-half goals.

Shots were 17-1 in favor of the Skippers, which got a first high school goal in the final minute from Ryan, a freshman.