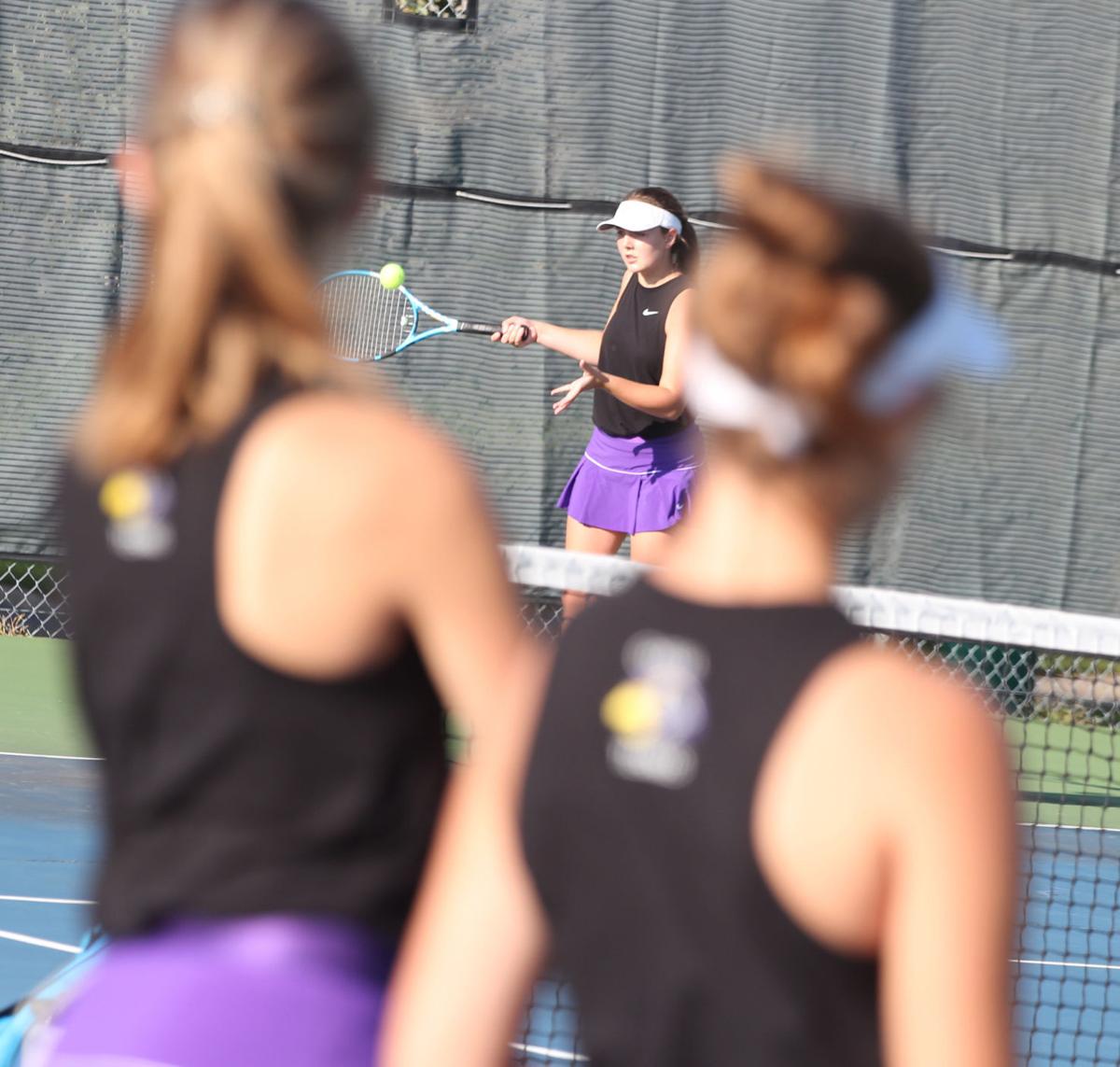 Teammates watch on as Taylor Dorn of Chaska plays a long point, a back-and-forth rally at fourth singles going to the Hawks. 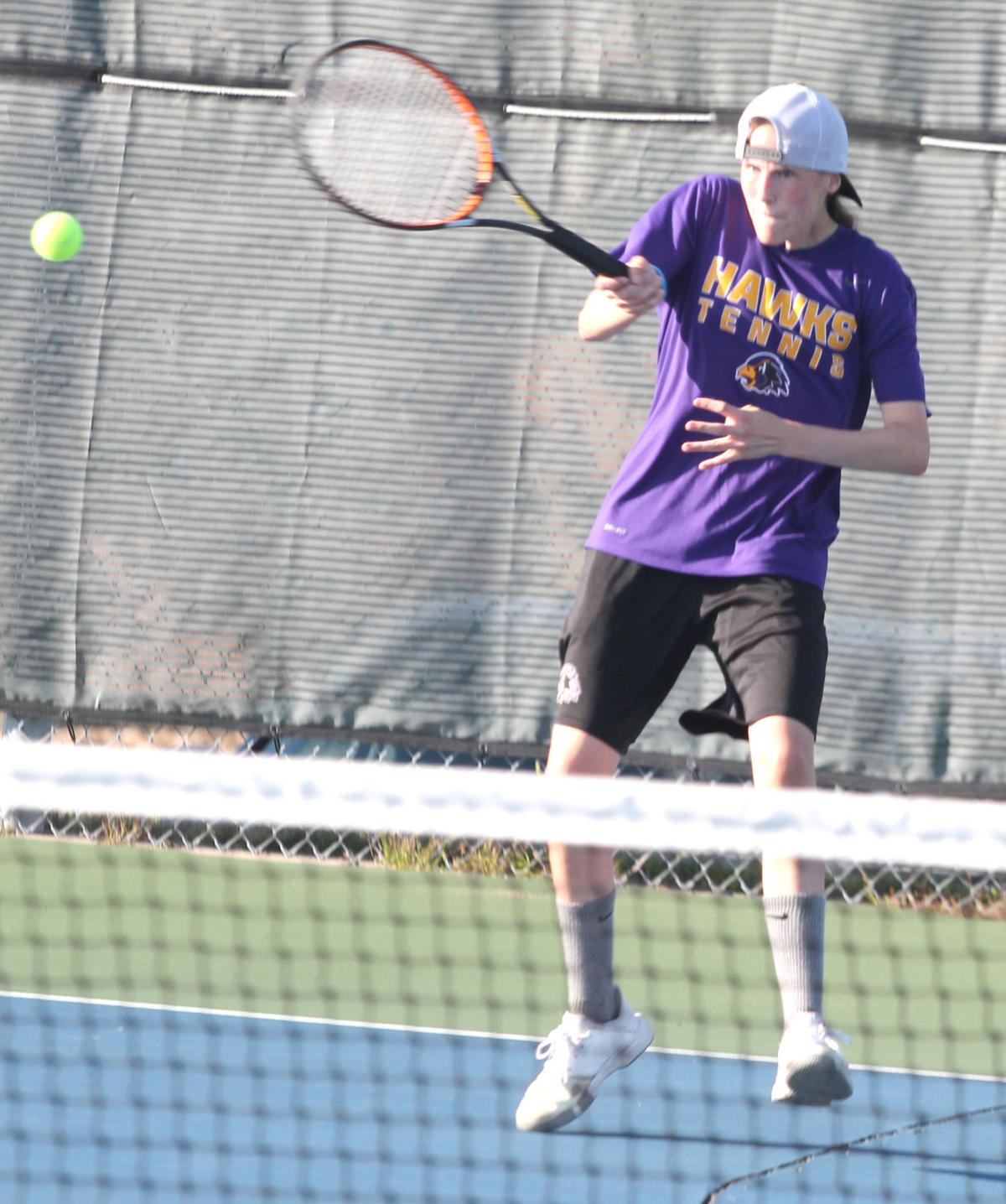 Chaska's Maddie Margraf, who scored the clinching point in a 4-3 win over Bloomington Jefferson on Sept. 9, won in straight sets at No. 3 singles on Sept. 14 at Bloomington Kenendy.

Teammates watch on as Taylor Dorn of Chaska plays a long point, a back-and-forth rally at fourth singles going to the Hawks.

Chaska's Maddie Margraf, who scored the clinching point in a 4-3 win over Bloomington Jefferson on Sept. 9, won in straight sets at No. 3 singles on Sept. 14 at Bloomington Kenendy.

It's been a while since Chaska girls tennis beat Bloomington Jefferson. Four seasons to be exact.

Earning three team points in singles, including the clinching win from Maddie Margraf, the Hawks beat the Jaguars 4-3 on Sept. 9.

With wins over Robbinsdale Cooper, Bloomington Kennedy and Waconia, Chaska is off to a 4-1 start in the Metro West Conference.

Sisters Kendall and McKenna Thom added a key team point at third doubles, 7-5, 6-2, for the Hawks.

Two other matches went to three sets. Chaska's Taylor Dorn at third singles and Reese Williams and Mylie Brandt at first doubles each won the first set, but were unable to finish off the win.

Chaska swept Robbinsdale Cooper 7-0 to start the week on Sept. 13, remarkably giving up just one total game in the seven matches.

Natalie Roth and Bethany Gaston were 6-0, 6-0 winners at third doubles for the Hawks.

Chaska added a 6-1 win at Bloomington Kennedy with Williams scoring a contest first set before her opponent retired to win at No. 2 singles. Other victors were Margraf and Dorn in singles.

Roth and Brandt rallied to win in three sets at first doubles, while the Thom sisters and Toltzman and Gaston won at second and third doubles in straight sets.

Unbeaten Chanhassen had its shot at beating Benilde-St. Margaret Sept. 14, getting a 6-0, 6-1 win at third doubles, and had three others matches in three sets.

The Red Knights, though, won all three final sets, handing the storm its first loss in 10 duals, a 6-1 decision in St. Louis Park.

Chanhassen is 4-1 in the Metro West Conference.

Lexy Kukacek and Peyton Tregembo won easily for the Storm in doubles.  Savannah George and Ellie Rathbun also won their first set 6-2 before dropping the next two, 6-2, 7-6 with the final tie-breaker 7-5, at second doubles.

The top-ranked Skippers rolled through the Eagles with their eighth seven-match sweep of an opponent this season. Minnetonka is 10-0 overall, having won 67 of the 70 points this season.

The Tigers improved to 12-1 on the season with a sweep of the Fire. Delano's lone loss came against Wayzata. Holy Family Catholic is 2-7 on the season and 1-3 in the Wright County Conference.

Issy Bergstrom and Autumn Wiens won 6-0, 2-6, 6-0 at third doubles for the Stars in the Wright County Conference loss. Southwest Christian was without two of its top players. Kiera Cameron and Biz Olimb won seven games at second doubles in a loss.