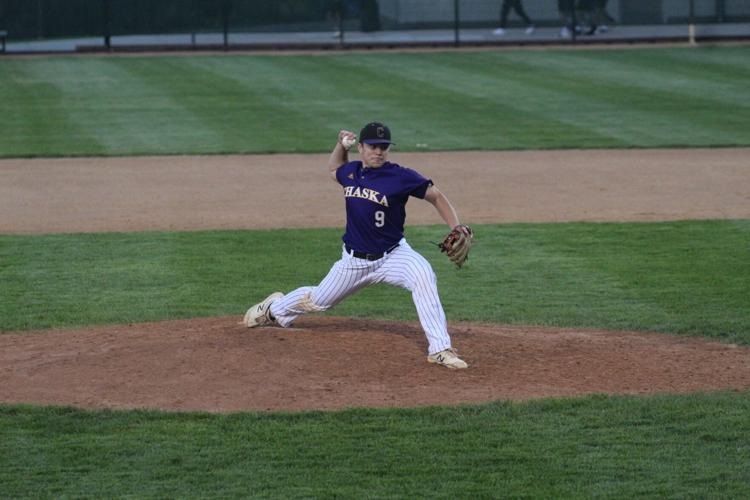 Senior Dayne McNaughton delivers a pitch during a 2-1 win over Chanhassen May 20.

The Chaska baseball team won 12 consecutive games on their way to winning the Metro West conference. 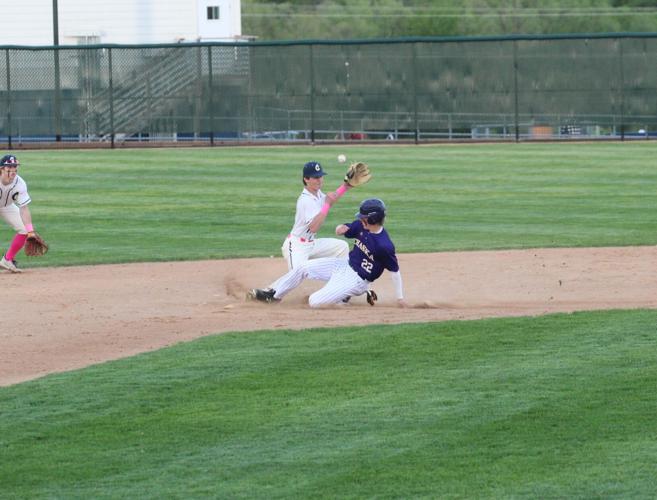 Senior Tommy Hanson slides into second safely in a 2-1 win over Chanhassen May 20.

Senior Dayne McNaughton delivers a pitch during a 2-1 win over Chanhassen May 20.

The Chaska baseball team won 12 consecutive games on their way to winning the Metro West conference.

Senior Tommy Hanson slides into second safely in a 2-1 win over Chanhassen May 20.

Head coach Craig Baumann has high expectations for anyone who plays for the Chaska baseball team.

After the Hawks finished the 2021 season with an 11-11 record, a fourth-place finish in the conference and a loss in their second game of the section tournament, the expectations for 2022 remained the same: be a competitive team in the Metro West conference and section 2AAAA.

With many players from last year’s roster returning, Chaska finished the regular season 18-2 and won the Metro West championship for the first time since 2017 and third time since the turn of the century. The only bump along the route to the conference crown was a 2-1 loss suffered April 29 against Chanhassen.

Since that loss, the Hawks have been rolling through their opponents, winning 14 games in a row. During the win streak, Chaska has outscored opponents 99-20. As the Hawks turn their focus to the end of the season, Baumann wants the team to finish strong and continue the stellar play into the postseason.

“It’s all about who gets hot at the right time and then rides the momentum through the tournament,” Baumann said. “Our section is usually really good, it’s usually like a mini state tournament to get out of it.”

Baumann believes Chaska is in this position because of the team’s effort in the offseason and bond among each other. One element of building team chemistry that the Hawks have done throughout this season and in previous ones is their process of determining the team’s most valuable player.

At the first practice of the season, Chaska coaches would determine who was the “champion” of the practice, and then the player who won it would determine the next day’s winner all the way up until the season’s end. They used to hand out a team ‘MVP’ jersey, however, the Hawks have turned the jersey into a WWE championship belt this season.

“It’s about recognizing the guy who won the day. Winning it shows you are working hard every day, it really makes people want to win the belt,” senior Karver Miller said.

In the early stages of the season, senior pitcher and outfielder Nolan Kemp said one of the main goals for many players on the team is to enjoy the last season together. The belt is one way the team has been doing just that, as Kemp sees it as a fun, friendly competition among players. However, Kemp wants to take advantage of what the Hawks have and play well on the field.

“We want to go to the state tournament. Chaska is a big baseball town so I feel like the town would have our back,” Kemp said.

The Hawks will then begin their quest back to the state tournament May 30. Chaska has not been to the tournament since 2008, but they are projected to be one of the top teams in section 2AAAA and will likely face either Bloomington Jefferson or Minnetonka. Win or lose, the second game of the tournament will be on June 1 in either the championship or elimination portion of the bracket.

Chaska was ranked fourth in Class 4A in the May 20 Minnesota coaches’ association rankings, the only team from section 2AAAA to break the top 10. But the Hawks road to the state tournament will be no easy test, as they will have to get past teams like Eden Prairie (15-4) and Chanhassen (11-8). The Hawks split the season series 1-1 between the Storm and beat the Eagles 6-0 April 19 in the second game of the season. Baumann is not concerned about the rankings, but rather how the team plays on the field.

“The only time it really matters is at the end of the year. We want to finish on a high note, play high level baseball, and be confident,” Baumann said.