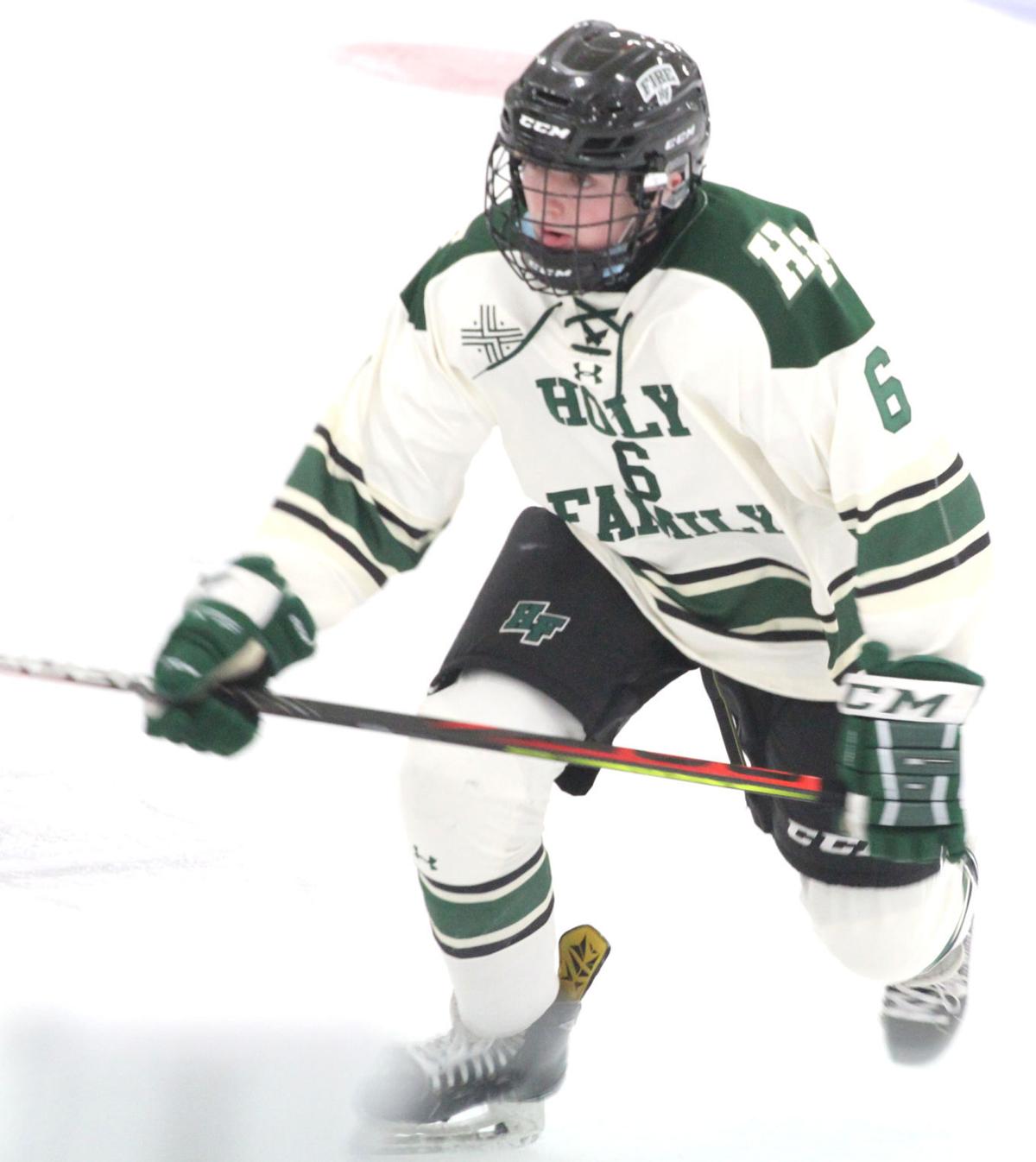 Holy Family Catholic senior Ben Reddan is the last of three brothers to come through the Fire hockey program over the last eight years. Reddan and the Fire are 8-3-1 on the season in 2021. 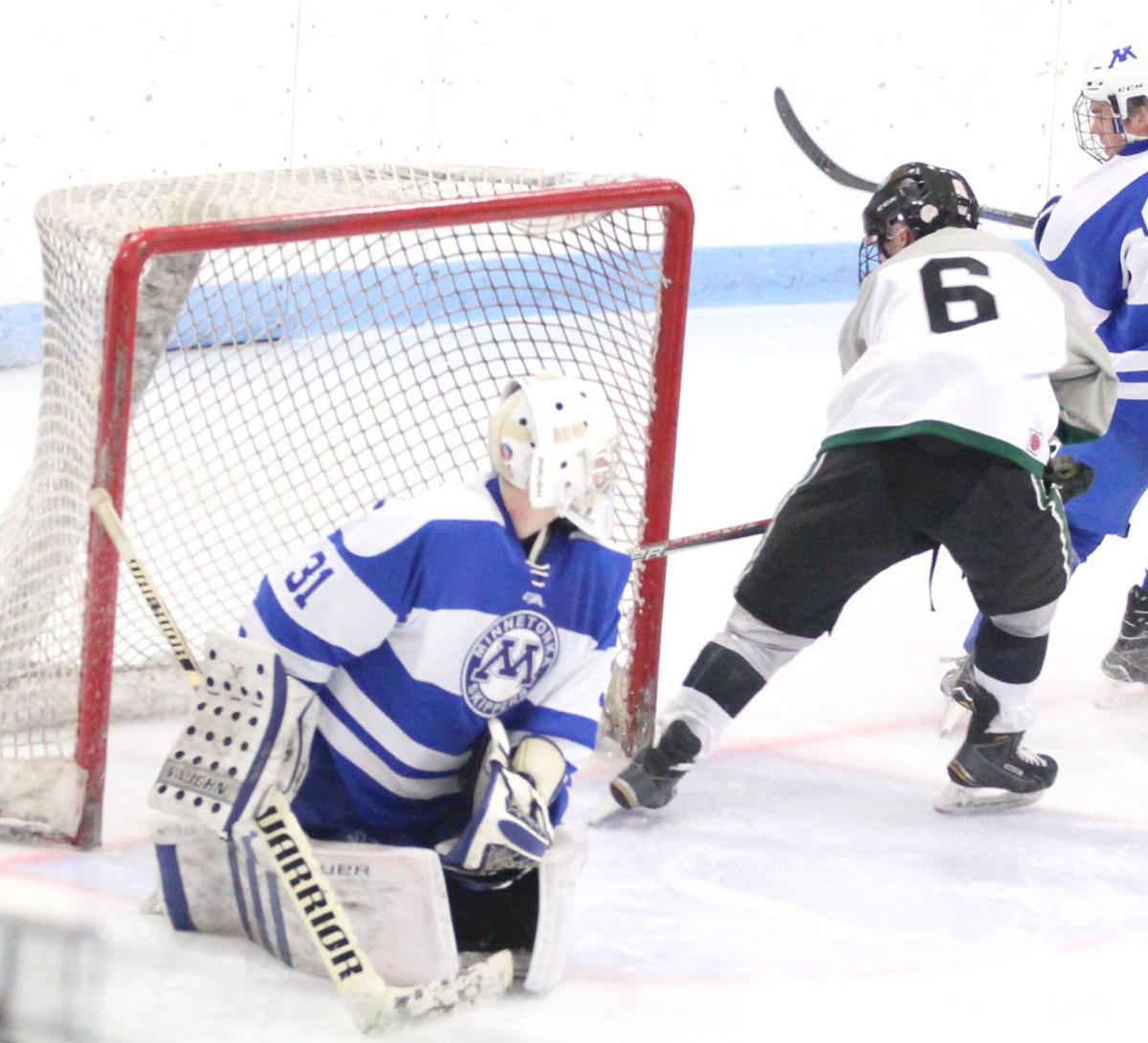 Patrick Reddan taps in a rebound that squirted through the arm of Minnetonka goaltender Matt Muller for his second of three goals in a 2017 Section 2AA semifinal win for Holy Family Catholic. 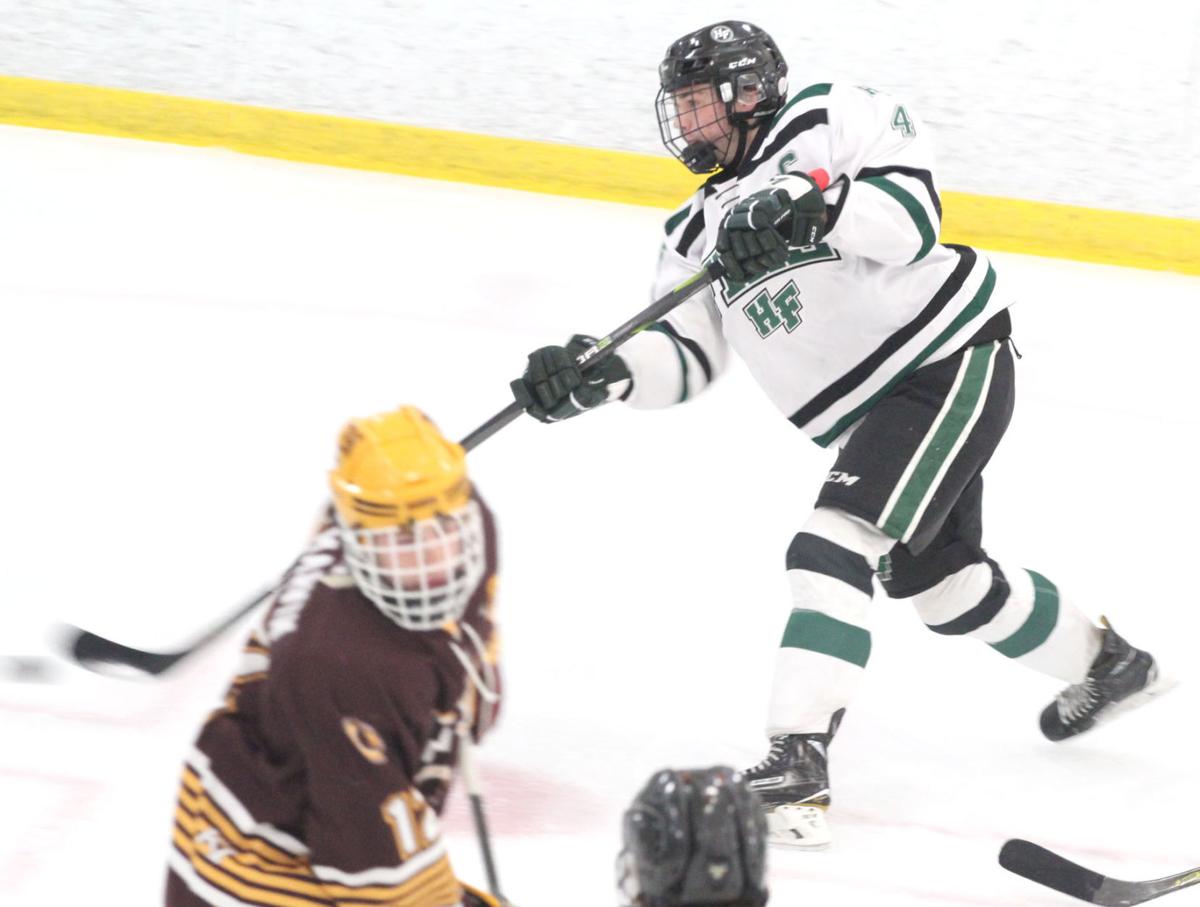 Holy Family Catholic’s Dan Reddan rips a shot on net in a recent game with Northfield in 2019. Reddan played boys tennis and baseball along with hockey in his time at the Victoria school. 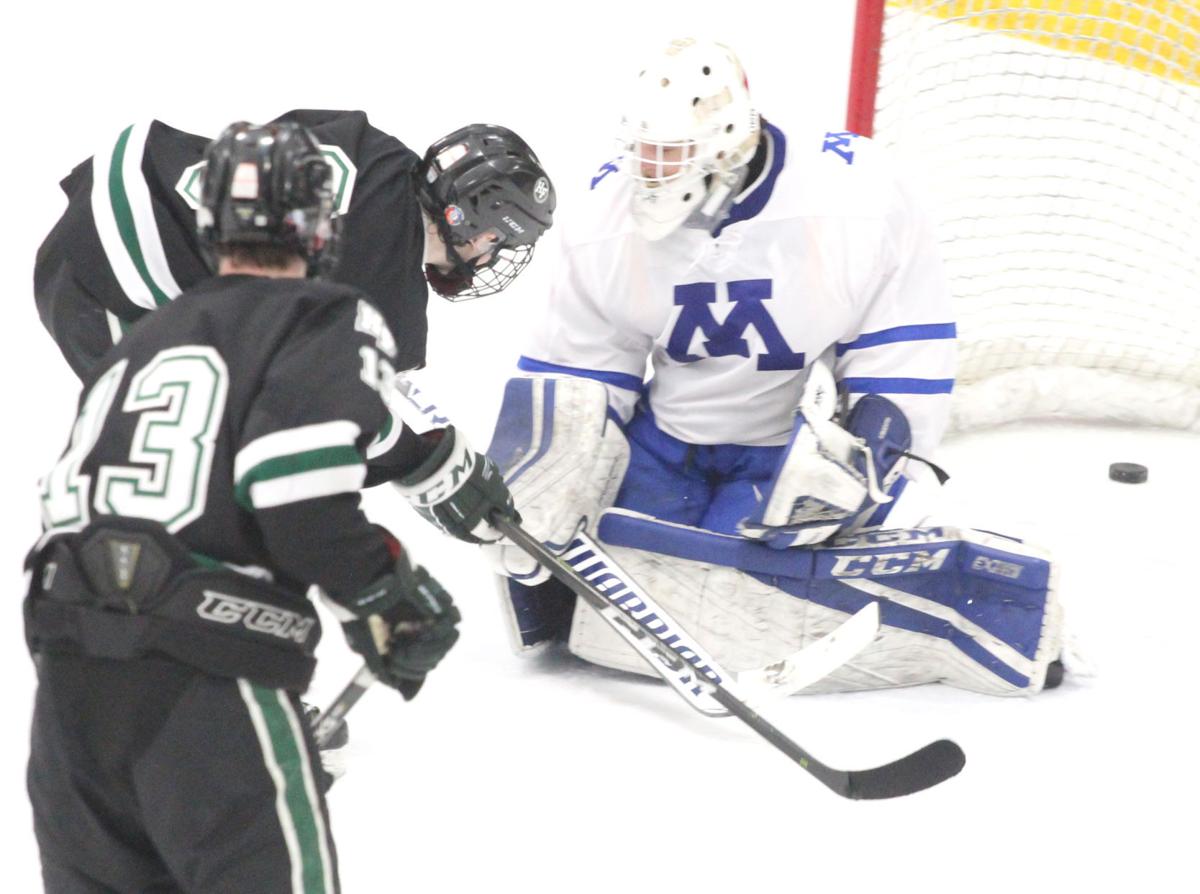 Holy Family Catholic senior Ben Reddan is the last of three brothers to come through the Fire hockey program over the last eight years. Reddan and the Fire are 8-3-1 on the season in 2021.

Patrick Reddan taps in a rebound that squirted through the arm of Minnetonka goaltender Matt Muller for his second of three goals in a 2017 Section 2AA semifinal win for Holy Family Catholic.

Holy Family Catholic’s Dan Reddan rips a shot on net in a recent game with Northfield in 2019. Reddan played boys tennis and baseball along with hockey in his time at the Victoria school.

Neither parent was in the Victoria arena. Many of the hockey parents giving up their tickets to allow Holy Family students to attend in-person. A video stream of a 10-1 victory the only way to see the action.

A stark contrast from many winter nights over the years for the Chaska's Reddans.

"Hockey has been such a big part of our lives for the past 15 years. It's a big commitment for the player as well as the family, but the payoff is so big in terms of memories and relationships that will last a lifetime," the Reddans said. "We get such enjoyment out of connecting with families we spent time with at the (Chaska Chanhassen Hockey Association) level. And we really enjoy following the success of all the players our kids have played with in the past. Whether it be at other high schools or colleges, we greatly enjoy following their careers."

Dating back to the 2013-14 season, one, sometimes two Reddans, have been on the varsity roster for the Fire.

First there was Patrick, who played between the 2013-14 and 2016-17 seasons, amassing 42 goals and 61 assists in 105 varsity games. Patrick had nine multi-goal games, including a post-season hat trick versus Minnetonka during a 38-point senior season.

Danny followed as a defenseman, joining varsity mid-season as a freshman in 2015-16, playing through the 2018-19 season. In 96 varsity games, the blueliner found the net 17 times with 31 assists, totaling 26 points as a senior.

"It was awesome watching them growing up in the program and it made me want to come here and be a part of this hockey program, too. I was really looking forward to these four years and it's been a blast," Ben said.

It's hockey that has been a constant bond among the three brothers from earlier years to now.

"Being the oldest meant that it was normally them versus me, so that resulted in some spirited games early on," Patrick said. "I'd say they pushed me just as much as I may have pushed them. While they were technically in my shadow due to age, I've been pretty outspoken that I think they both have more skill than I."

"The last eight years at Holy Family have been very special for our family. It's a special thing when your kids get the opportunity to play together on the same teams, and we are grateful to Coach (Noel) Rahn as well as the other coaches over the years for their dedication and mentorship to our boys," the Reddans said.

BOYS WILL BE BOYS

No matter how each brother felt about each other at home, for one reason or another, when the Reddans got on the ice together there was a special camaraderie. Danny played two seasons with each of his brothers.

"I think the coolest aspect of playing with both of my brothers would have to be being taught from my older brother about leadership, watching him work hard to accomplish what the team had set out as its goals, and then being able to use that knowledge to serve the same role for Ben," said Danny, now in college at the University of Minnesota's Carlson School.

"I remember 6 a.m. morning skates at Chaska Community Center where Danny would be crushing both Ben and I. However, as the two forwards in the family, Ben and I had fun teaming up on Danny in those morning skates as well as our neighbor and former Chaska goalie Justin Bach," Patrick said. "I did have the opportunity to play with Danny for two years, and it was fun to run some of the same plays we would draw up on the pond or at morning skates. Being on the same wavelength was a definite advantage, and I'm sure Ben and Danny experienced something similar."

In that many games, between youth and high school, there are memories that standout above the rest. Both exciting and heartbreaking.

"Since I graduated, it's been fun to watch as (Danny and Ben) played a big role in Holy Family's success over the past few years. Both of them have been key pieces of really good teams, so I've enjoyed the 'fan' role the last few years," Patrick said.

"What we will take away most are the wonderful memories of time spent with our friends all the way from squirt tournaments to big high school playoff games, and we'll stash away some of the skates and sticks for the grandkids; just in case," the Reddans said.

Danny remembered Patrick's overtime winner over Grand Rapids in the Turkey Trot in Plymouth in 2016.

There were tough section championship losses at Mariucci Arena to Eden Prairie and eventual state champion Minnetonka in 2017 and 2018.

In 2019, Ben, who had scored four goals during the regular season as a sophomore, helped Holy Family Catholic upset Prior Lake with the winning score with 5:18 remaining in a 1-0 final.

Two days later, taking on No. 1 Minnetonka at Braemar Arena in the section semifinals, on a 3-on-2 opportunity, Reddan took a pass from Garrett Pinoniemi and scored the overtime winner. An end to a repeat bid from the Skippers, who were being filmed for FSN North's Dream State program.

Ben Reddan with the WINNER IN OT!!! Takes down the defending state champs!!!

STILL HAVE NOT LOST TO MINNETONKA EVER IN REGULATION

"It has to stick out, right? It's one of my favorites, if not my favorite hockey moment of all-time. The group of guys we had that year, how close we were. No one expected us to make that run, get back to the section championship, and I think that made it even more special," Ben said.

"This year's team is really like that team, and hopefully we can make a similar run this year, too," he added.

Holy Family Catholic has flown under the radar this season despite a 7-3-1 record. Their three losses have come against No. 2 Eden Prairie, No. 7 Hill-Murray and No. 10 St. Thomas Academy.

The Fire, beaten 7-0 in the season opener by the Cadets, played to a 3-3 tie four weeks later in Mendota Heights. Holy Family Catholic rallied from a three-goal deficit after one period, and had a 5-minute power-play in overtime, a chance to win the game outright.

"It's regroup and how do we get better. Our coaches have said to refocus and move on," said Ben of three lopsided losses being followed by decisive wins. "I think those St. Thomas games show us how much we've gotten better. The first game we were taken by surprise a little bit. The second time we went in with a different mindset, and I think if we continue to have that mindset into the section tournament, we can make a run."

Holy Family Catholic isn't flashy, but through 11 games they have had 13 different skaters with goals. Goaltender Jack Olson, a transfer from Benilde-St. Margaret, has given the Fire chances to win in most games.

"It's a bunch of experienced guys that understand how to play together. When we play as a team I think we can beat anyone in the state. That's how I feel. We have to play to our strengths, team hockey, no player greater more important than any other," Ben said.

As Ben finishes out his career with seven regular season contests remaining beginning tonight, Feb. 25, at New Prague, Brenda and Pat will soak in every minute, much like senior athletes do in their final high school year.

"This year is a little different knowing that with Ben graduating, our hockey journey is coming to an end. We have spoken to other families whose youngest has graduated and they say it is an adjustment for sure," the Reddans said. "It is so much fun for ourselves, and really our entire extended family to have the games to keep us busy during the long Minnesota winter months, and we will miss it."

Siblings at Holy Family Catholic is nothing new in the hockey programs. Here's a list of notable skaters from the last decade:

Joey ('14) and James Marooney ('18): Joey, who skated in 38 games at the University of Minnesota, finished his Fire career with 64 goals and 89 assists; James, currently a defenseman at Ohio State University, played three seasons with the Fire, netting 22 goals with 37 assists.