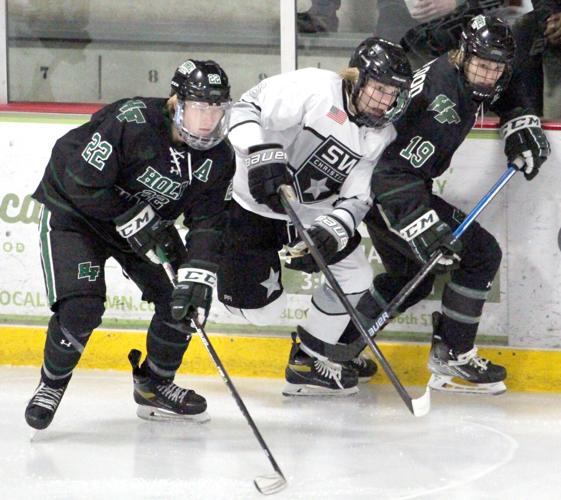 Southwest Christian/Richfield’s Andrew Erhart slides a pass to a teammate with Holy Family Catholic skaters Abe Melek and Nick Blood in his path. 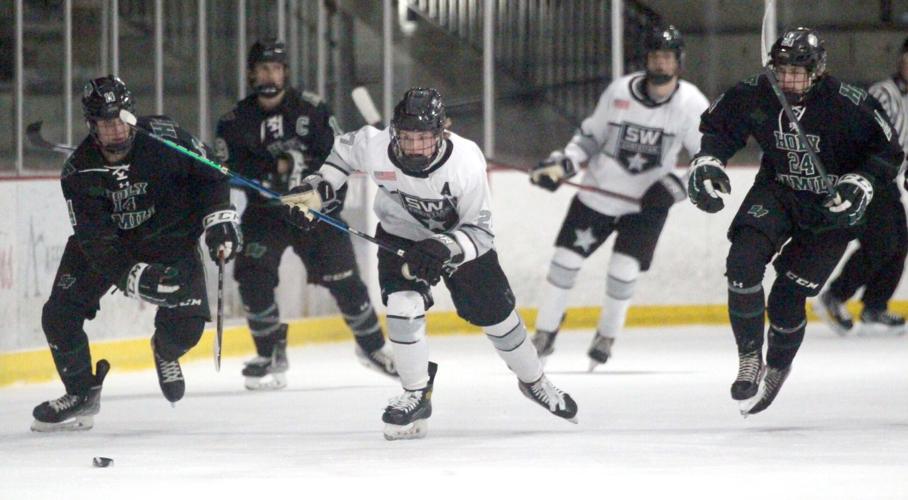 Southwest Christian/Richfield’s Brody Hardacre races into the neutral zone to recover a lose puck in a home game against Holy Family Catholic.

Southwest Christian/Richfield’s Andrew Erhart slides a pass to a teammate with Holy Family Catholic skaters Abe Melek and Nick Blood in his path.

Southwest Christian/Richfield’s Brody Hardacre races into the neutral zone to recover a lose puck in a home game against Holy Family Catholic.

The Wright County Conference has belonged to Holy Family Catholic boys hockey for the past decade. Newcomer Southwest Christian/Richfield started the 2021-22 season with three league wins.

Changing of the guard?

Scoreless at the halfway point of the second period, the Fire scored six unanswered goals, shutting out the Stars on Jan. 20 in Richfield.

Kam Hendrickson made 32 saves for Holy Family Catholic, which is 5-0 in the Wright County Conference and 8-11 overall.

The Storm Hawks beat Bloomington Jefferson despite a 33-18 shot difference.

Paige Sommerfeld scored her first varsity goal with Bethany Velasco adding to the score at 2-0. Katelyn Roberts' unassisted tally, her 19th of the season, moved the lead to 3-0 through one period.

Maddie Margraf made 32 saves in the win, including 12 shots in each of the first two periods.

Power-play goals from John Stout and Javon Moore tied the game at two for the Skippers. The tallies were separated by 72 seconds. Liam Hupka had assists on both goals.

Jimmy Clark's second-period goal broke the 2-2 tie for the Hornets.

It was the first loss in three conference games for the Skippers (8-6-1).

Next up for Minnetonka is Eden Prairie on Jan. 22.

The White Hawks forced extra time with a third-period goal from Sydney Leonard with under six minutes to play.

Pioske and Emily Wendorf netted back-to-back power-play goals in the first period, a 2-0 lead for MW/SWC.