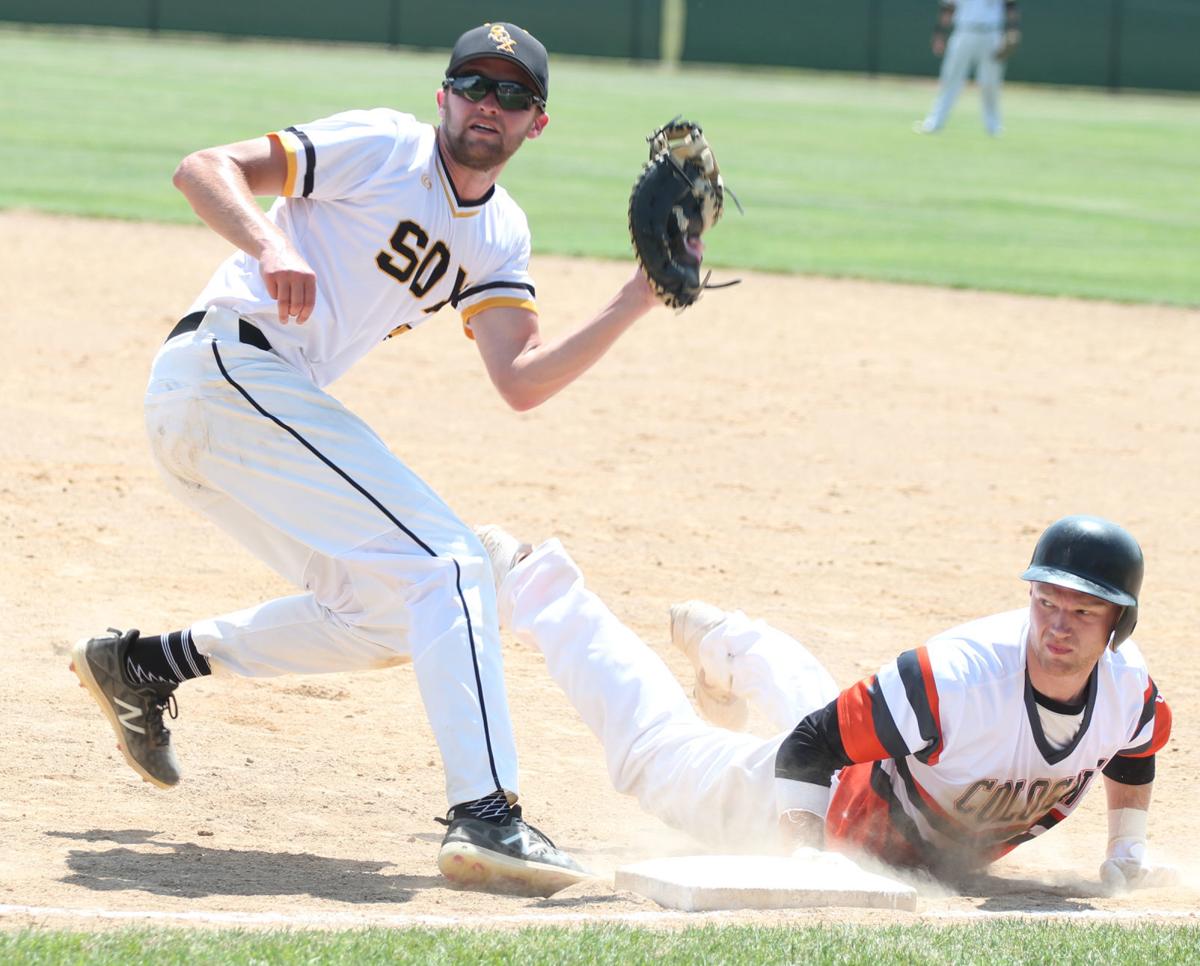 Carver Black Sox first baseman David Dolan shows the tag on a pick-off attempt of first base on Cologne’s Tanner Luebke. The Hollanders won 6-2 at Woody Swanson Field on July 5. 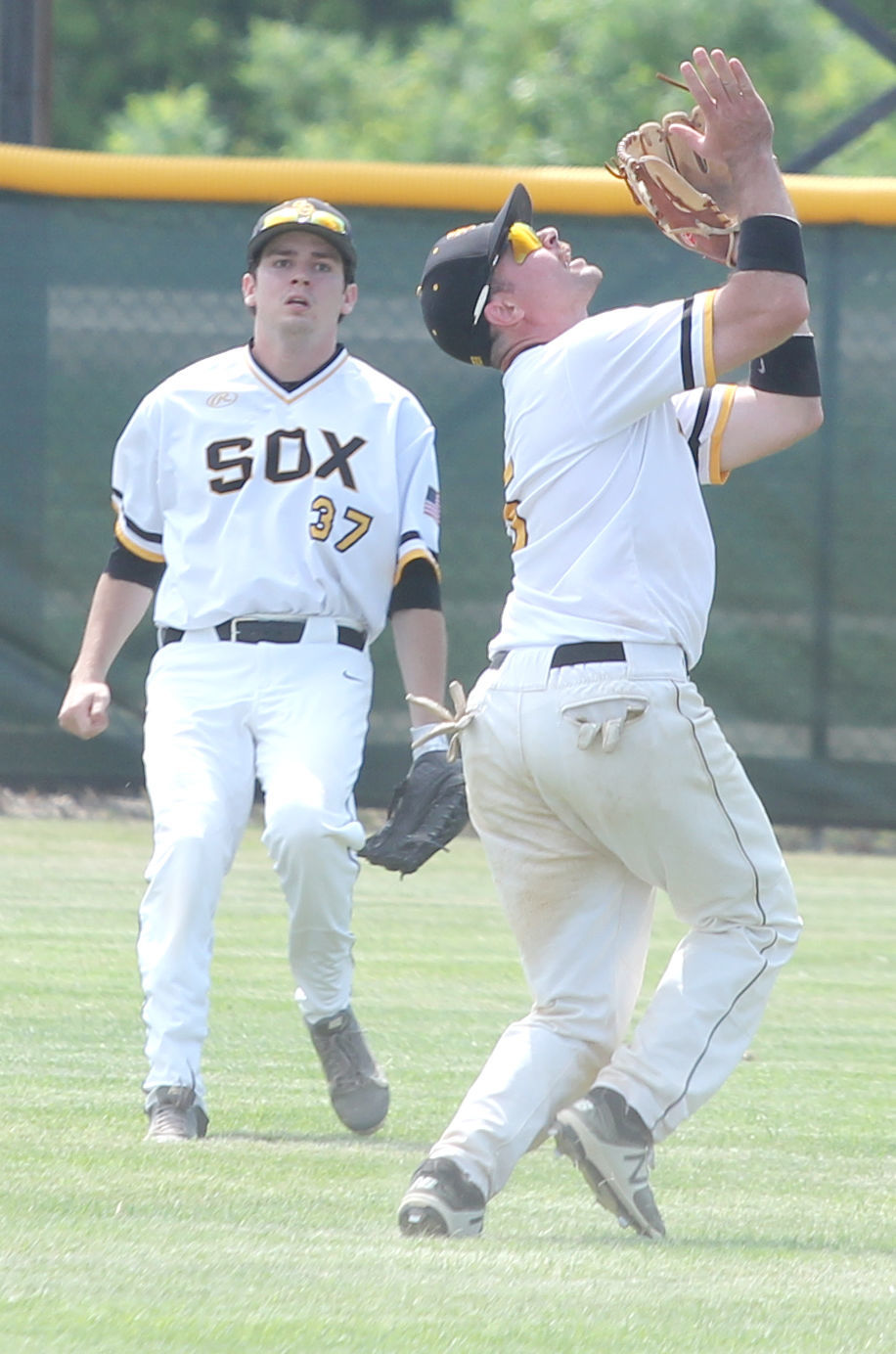 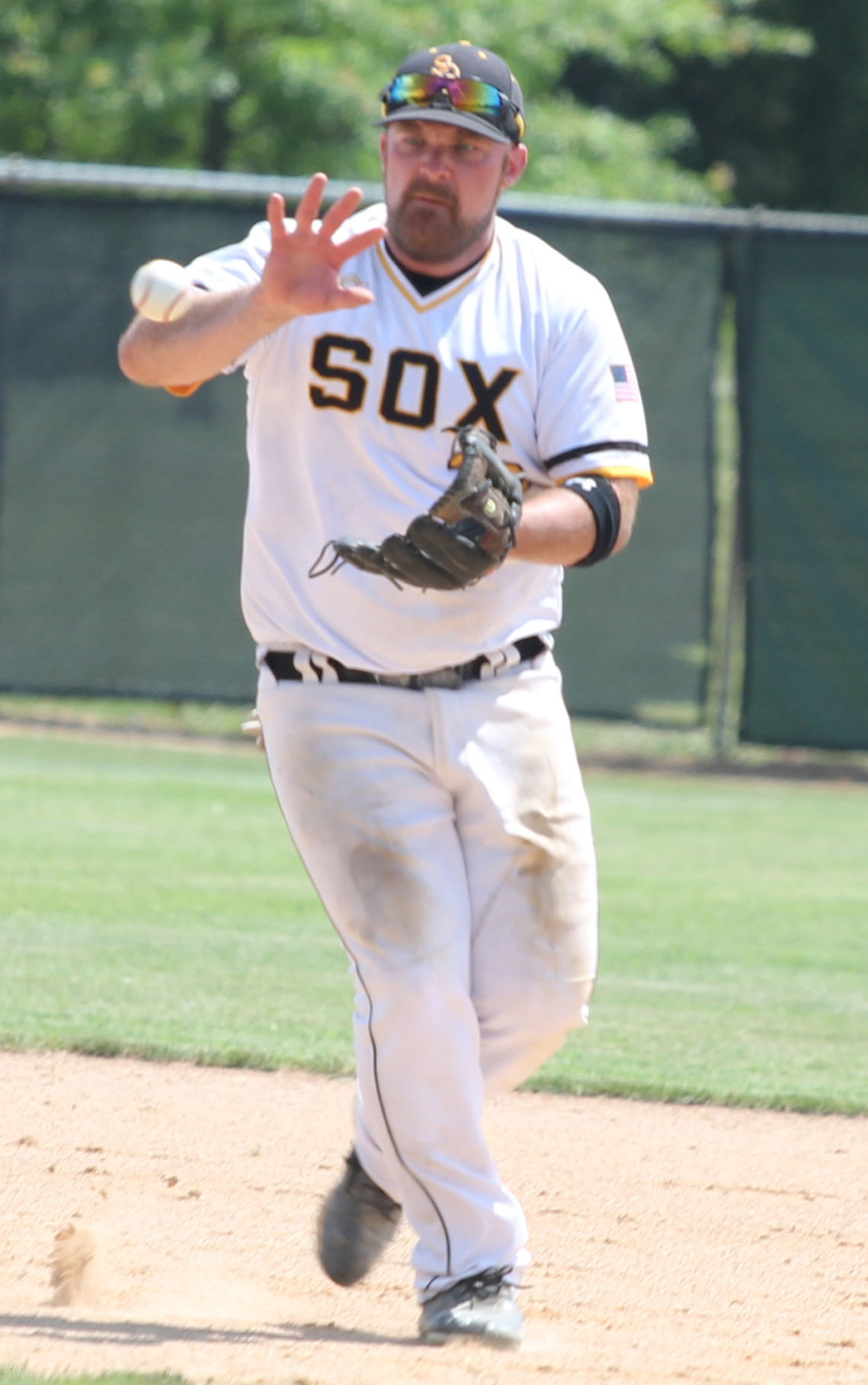 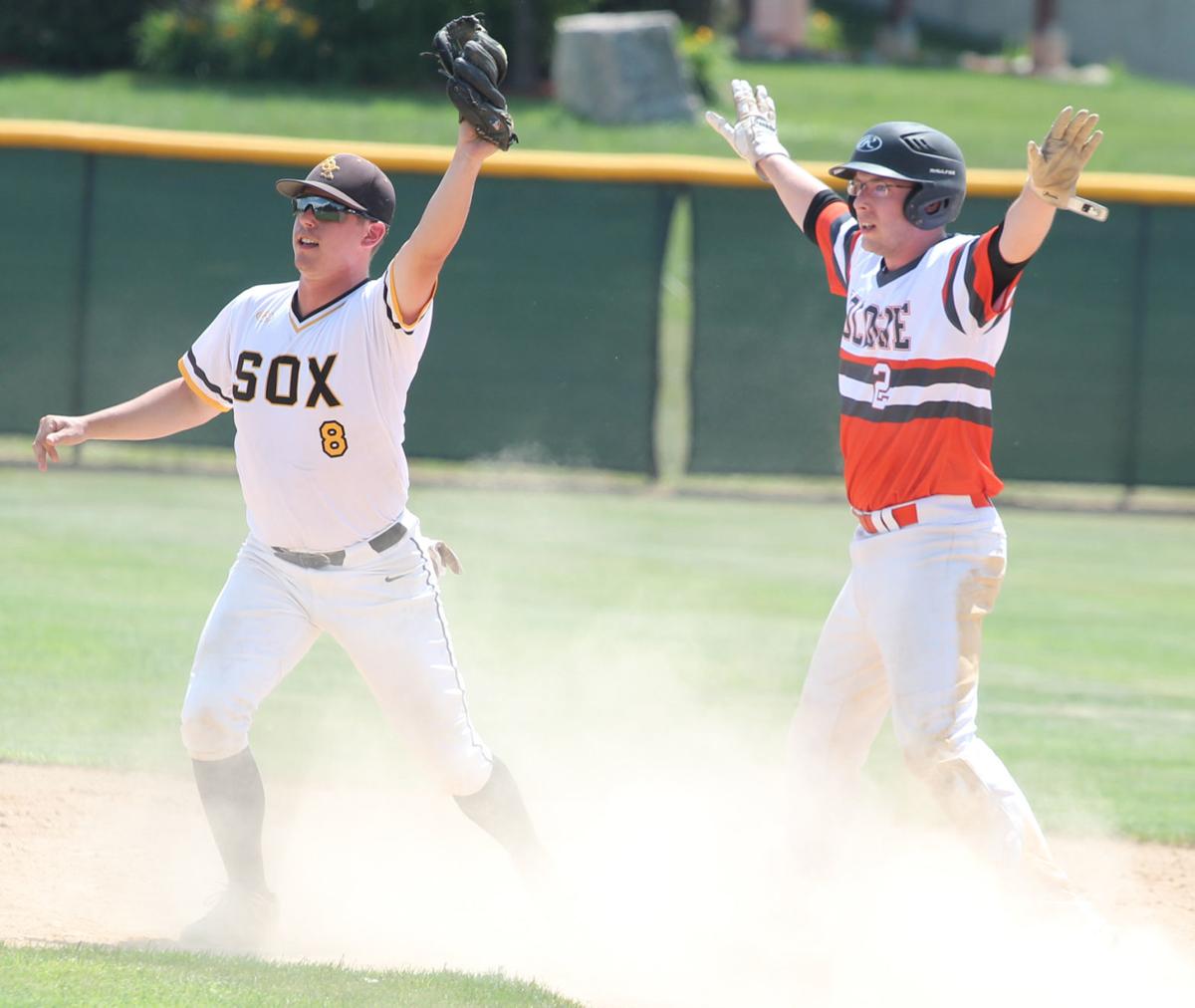 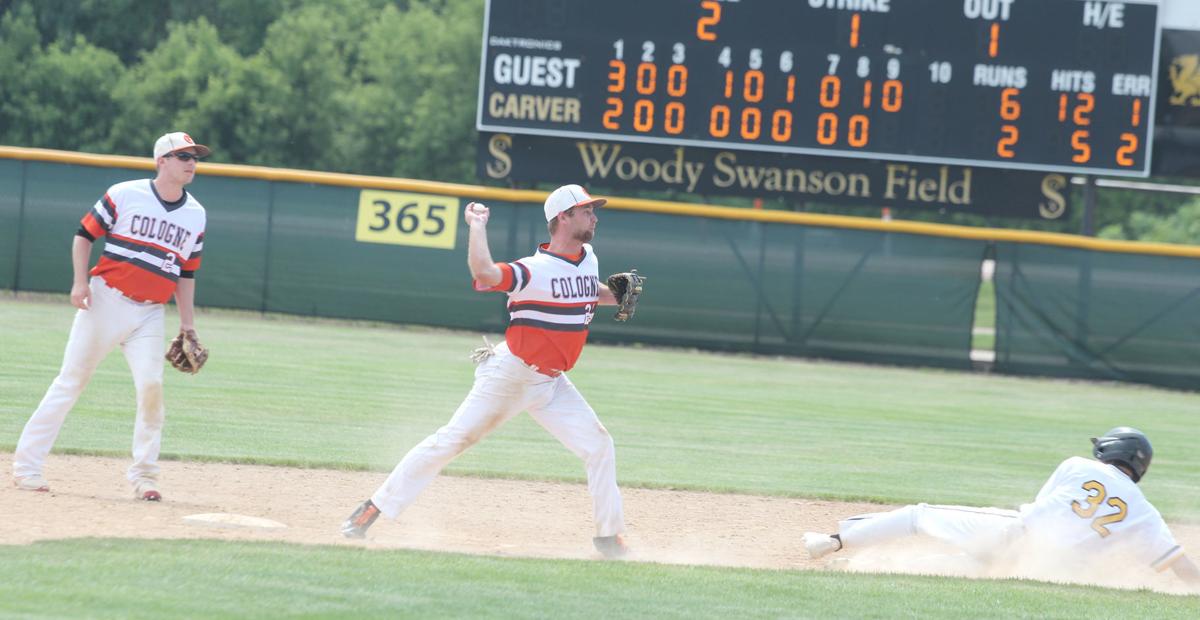 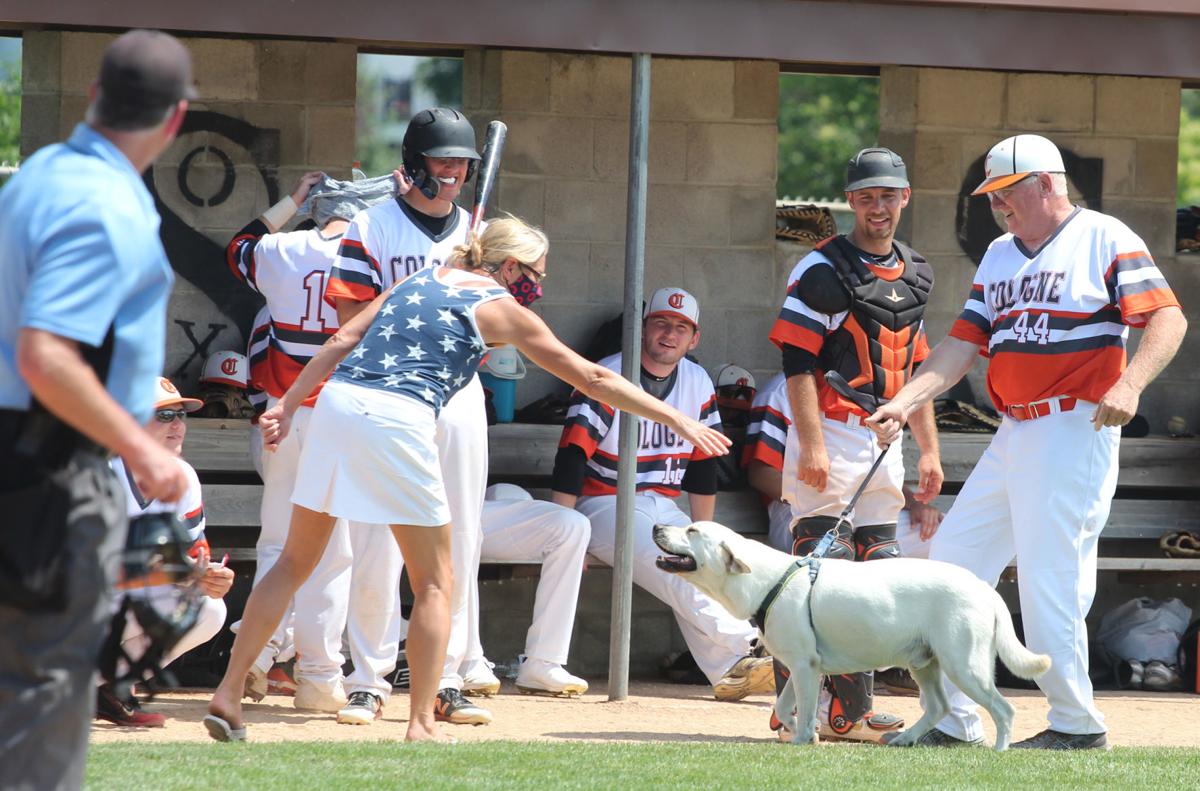 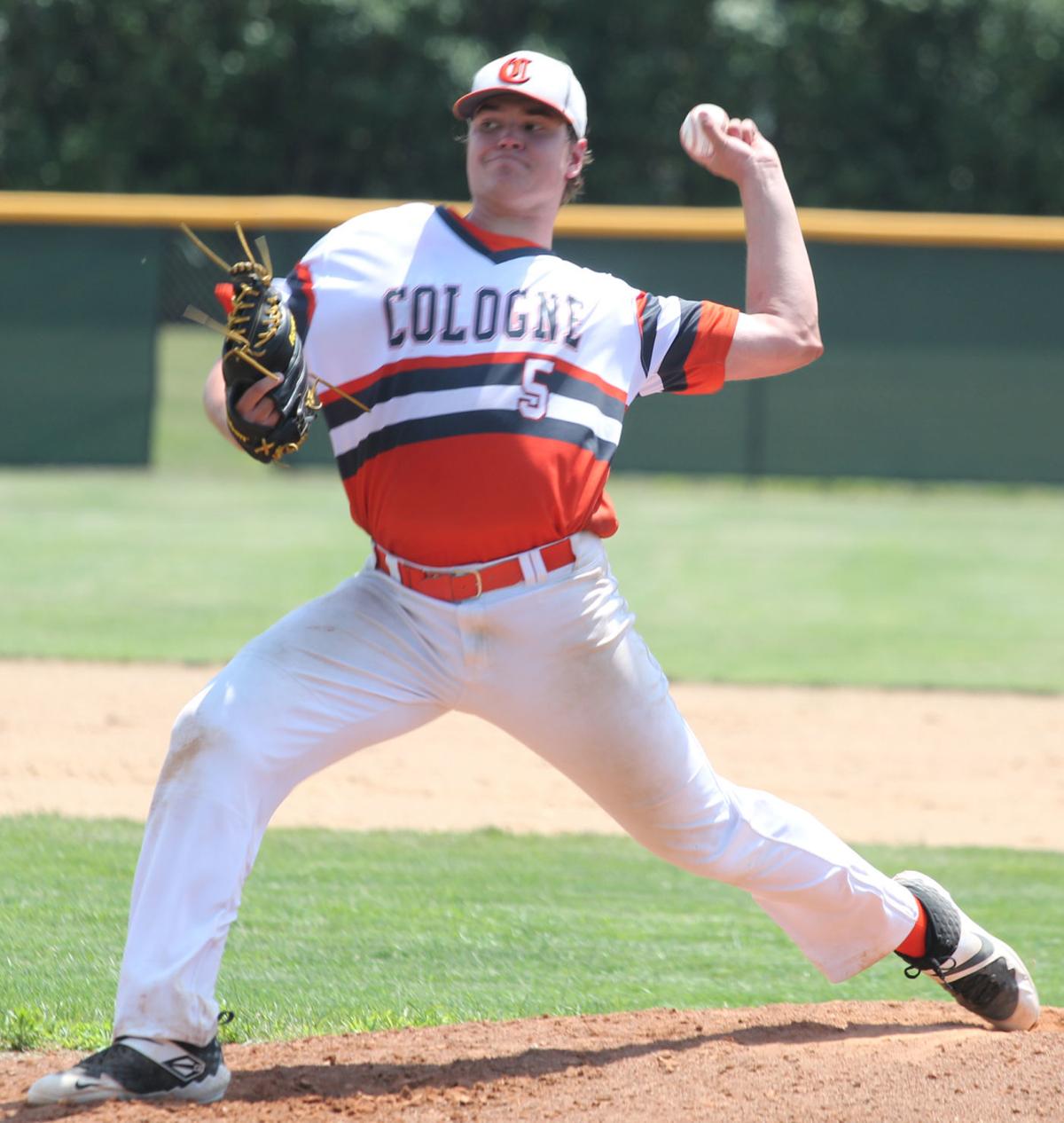 Carver Black Sox first baseman David Dolan shows the tag on a pick-off attempt of first base on Cologne’s Tanner Luebke. The Hollanders won 6-2 at Woody Swanson Field on July 5.

Playing town team ball, though, wasn't really on his mind as he entered college at Gustavus Adolphus College. Eden Prairie not fielding a hometown nine. Players from the program scattered throughout many Class A and B programs such as Chaska.

"I always wanted to play. I knew I could've played another year of Legion baseball, but being in college I figured the next logical step was town team. I had a buddy that was a year older than me that wanted me to play for St. Louis Park. A Gustavus teammate introduced me to playing in Victoria my first year. I didn't know what to expect, but I loved it," Urdahl said.

Urdahl, who made five appearances as a freshman at Gustavus Adolphus in 2018, totaling 9 2/3 innings, did not pitch as a sophomore due to a labrum injury.

"(Carter) gave a good pitch to Christian Johnson and I. We both said, 'let's do it.' Being hurt last year, coming in, (manager Craig Pexa) was really good for me. He worked with me, easing me back in with my throwing program," Urdahl said.

Thus far, Cologne is 5-1 overall. Urdahl owns two of those wins, having pitched seven innings in each. Outside of a pair of first-inning runs versus Carver on July 5 -- a 6-2 Hollander road win -- Urdahl has put up zeros.

He's allowed just eight total hits in 14 innings with 10 strikeouts to just three walks. None of the eight hits have gone for more than a single.

Against Carver, he surrendered just one hit over the final six innings as Cologne's bats added single runs in the fourth, sixth and eighth on RBI-hits from Carter and Casey Clemensen to secure the Crow River Valley League win.

Not bad for a pitcher that last threw in a game 11 months ago after Gustavus' 2020 season was halted just one game in.

"(Catcher Tim Swanson) is incredible. I usually work a lot more offspeed pitches and against Carver he noticed some things and I just followed his plan. He may look like he's just back there doing his thing, but he's always working, there's a million things going through his mind," Urdahl said of his battery mate.

With Johnson, Urdahl and now a third Gustavus arm, Jayce Luna (2-0 record, also a Le Sueur native, on the Cologne roster, the Hollanders are suddenly one of the teams to beat in the Crow River Valley League.

Remember it was just five years ago that Cologne was celebrating its first appearance at regions since 1993.

"We were on a family trip and I missed the first two state games. We're coming back on the plane and we land and I was immediately looking at my phone, finding out we beat Nisswa," Urdahl said. "I remember that last state game, Christian was pitching, and that atmosphere was the closest to what we had my senior year, playing in the state championship. The whole town seemed like it was out there."

Cologne, which got a big two-run double from Kyle Brazil to open with three runs in the first inning in the win over Carver, split a pair of back-to-back games before the Fourth of July holiday.

Joey Lilya connected on his first career home run, part of a 3-for-3 performance with three runs scored in an 11-2 win over Plato July 2. In total, Cologne had 18 hits with Kyle Twait, Zack Nelson, Jon Kummer, Urdahl, and Pengilly all with multi-hit games.

Urdahl, after collecting seven hits in 21 at-bats in 2019, already has two home runs and a double with five runs scored this season.

In a 6-2 loss to Mayer, Christian Johnson threw four shutout innings, striking out seven of 13 batters faced. The restart Blazers scored six runs off Hollander relief to hand Cologne its first defeat in 2020.

Cologne has a busy stretch with eight games in 12 days, of which five are on the road, including against other top Crow River contenders Watertown and Waconia.

Carver, which dropped two games on Sunday, playing 18 innings in 90-degree heat, plays four key league games over the next two weekends, including home Saturday contests against Waconia and Glencoe.

John Straka was nearly untouchable for two weekends at the 2019 Class B State Tournament for the Chanhassen Red Birds, earning most valuable player honors.

He appears to have come back even stronger in 2020, having worked out all winter, as he was hoping to pitch in the World Baseball Classic in Arizona this past spring for the Czech Republic.

Late home runs from Riley Johnson, Brandon Arnold and Michael Jurgella put the game out of reach for the Red Birds.

Aaron Kloeppner was 3-for-4 at the plate, with Ben Livorsi, Zach Hoffman and Jurgella each providing multi-hit games. Johnson also was 3-for-6 with two RBIs atop the line-up.

Pinch runners Grif Wurtz and Trent Thinesen scored without a hit as Chaska took a 5-3 lead on host Prior Lake in the seventh inning in a 6-4 season opening win on July 1.

Matt Halloran's 2-out RBI single one inning earlier plated Riley Swenson from second base for a short-lived 3-2 lead.

Chaska won the home opener 24 hours later, a 9-5 win over St. Louis Park on July 2.  The Cubs registered 15 total hits, scoring a trio of runs in the third and eighth innings.

Jordan Bonk, Graham Burke and Spenser Larson combined for a three-hitter with 11 strikeouts as Victoria defeated the Plymouth HitDawgs 5-0 on July 2.

Trey Cavello drove in two runs with a double as the Vics jumped out to a 5-0 lead in the first three innings.

Jon Leighton hit a 2-run homer, while Carter Schmidt drove in two runs in Victoria's 7-4 loss to the Minneapolis Cobras on July 1.

This Week in Baseball