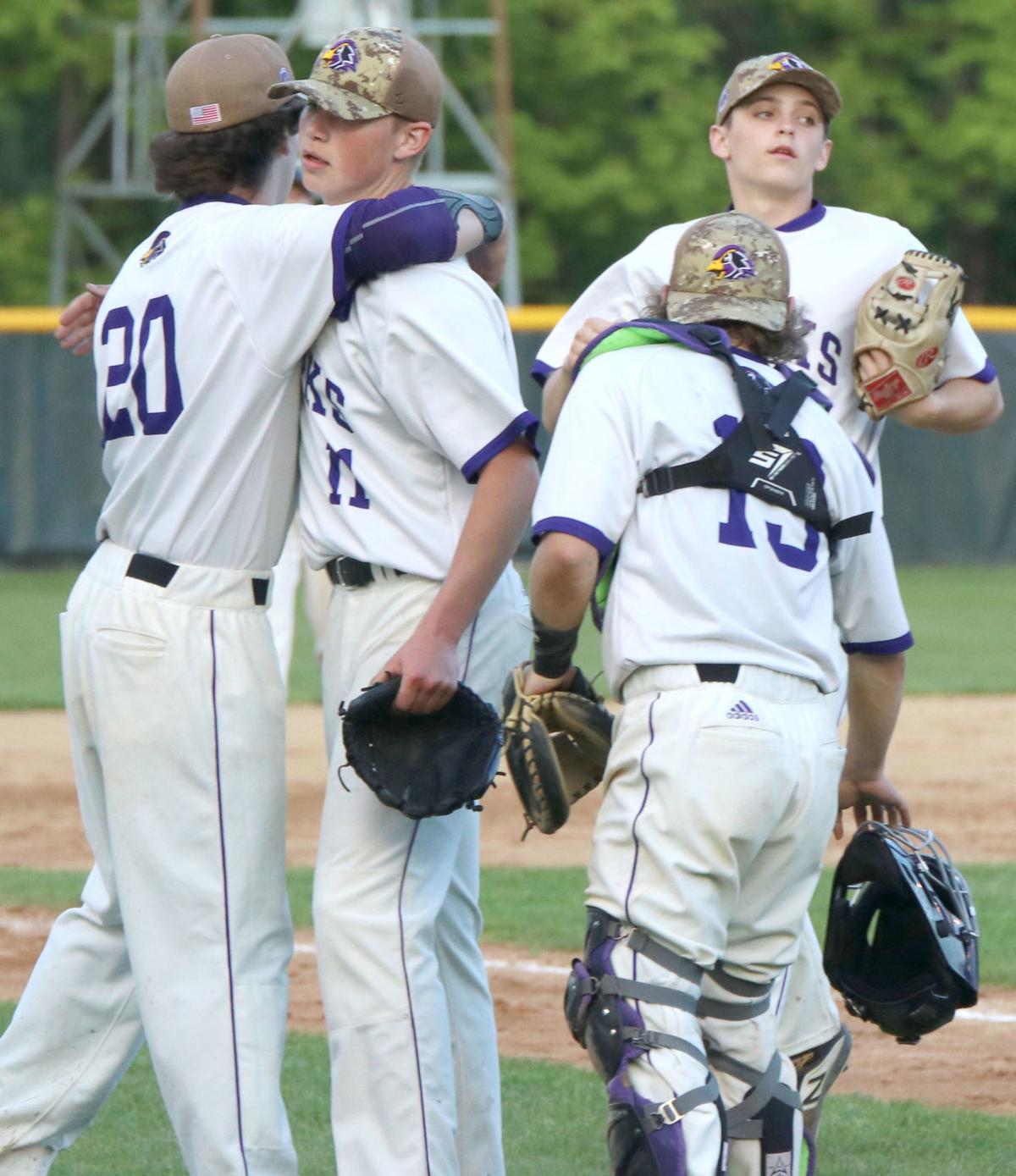 Charlie Dardis receives a congratulatory hug after throwing a complete-game shutout of Shakopee for Chaska in a Section 2-4A elimination game on May 29, 2019. 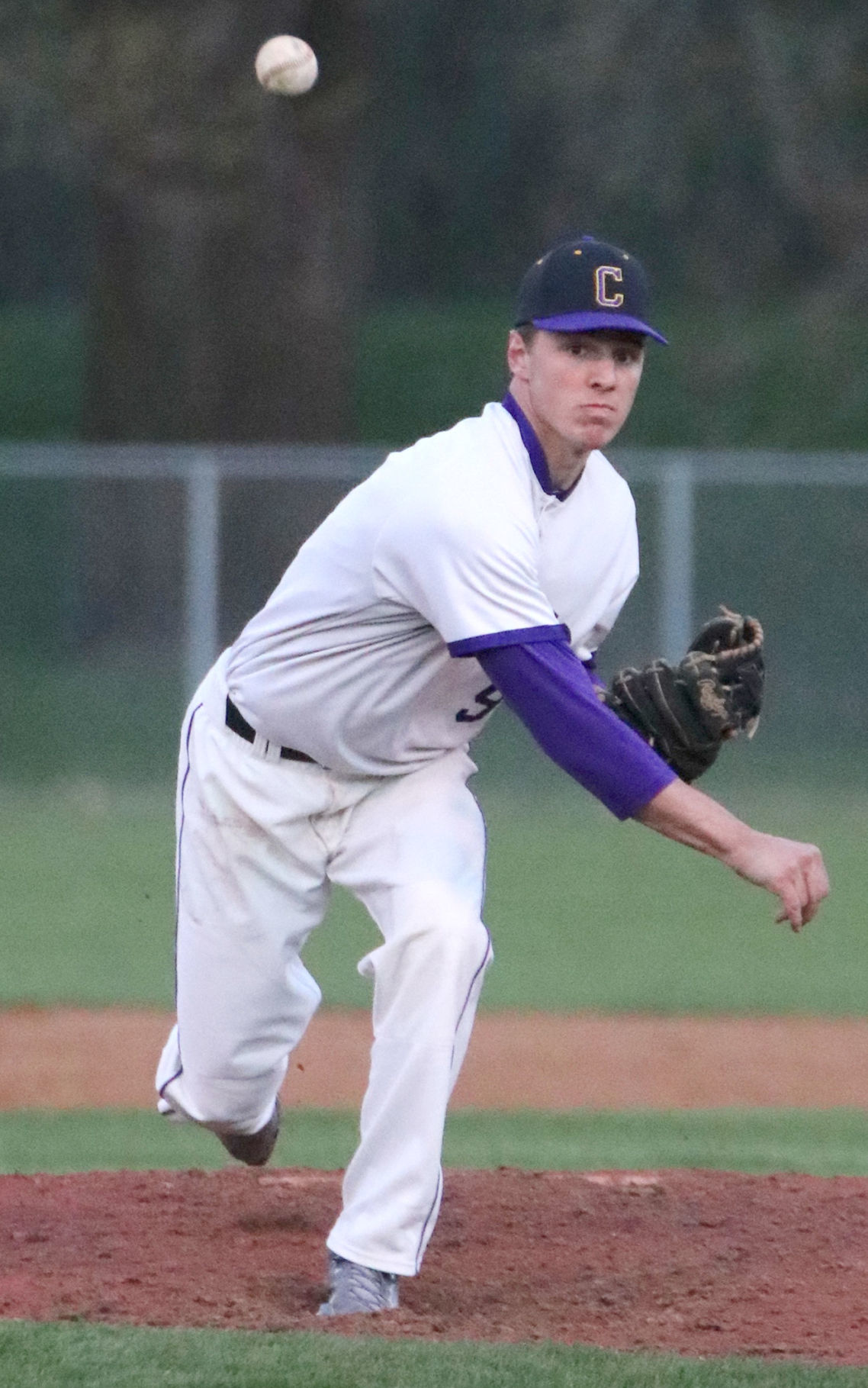 Chaska's Mac Born made his high school team debut on the mound in a contest against St. Louis Park on May 10, 2019.

Charlie Dardis receives a congratulatory hug after throwing a complete-game shutout of Shakopee for Chaska in a Section 2-4A elimination game on May 29, 2019.

Chaska's Mac Born made his high school team debut on the mound in a contest against St. Louis Park on May 10, 2019.

Charlie Dardis stood in the front row of the student section each Friday, cheering the Chaska Football team all the way to U.S. Bank Stadium for the school's first state championship.

He was in the gym for the basketball teams, in the arena for hockey, among the crowd for the section volleyball tournament run by the Hawks.

A true supporter of all things Chaska.

This spring, on the baseball diamond, it was his time to be supported.

"With the class we have, in activities, sports, speech, theater, everything else, our senior class was really strong. Going to those games, experiencing those good times watching some of my best friends succeed in their sport, I was more excited for this season than any other," Dardis said.

For the senior baseball pitcher, it's about the atmosphere at Athletic Park. The students crowding behind home plate cheering to the last out. Hanging out behind the right-field fence, the tailgate among students.

So it was disappointing when the 2020 high school and summer seasons were taken from everyone in every sport.

"It's tough. Nobody wanted it to end that way, but there's nothing we can't do about it," Dardis said.

Mac Born, a starter for Chaska since his freshman season, worked for the season ahead. A year in which the Hawks hoped to win conference and section titles and get a crack at being the first Chaska baseball team to state since 2008.

"I feel like I missed out most out playing with my friends I grew up with. Some of the seniors were on JV, this was our year to play together again. We've been waiting for this season. We all just had this great chemistry from playing with each other so long ago," Born said.

The senior third baseman/pitcher also said he was disappointed to not have a chance to play with the underclassmen. "They fit great with the family," he said.

What made losing the season so painful was the loss of one last chance to play together in the game they love.

It was just two years ago all 12 seniors from the Class of 2020 won a State VFW Championship together. A handful have been teammates since at least 10 triple-A travel ball.

"It hurts knowing that some of my buddies on the team, this was their last season they were ever going to play. The group we had, we've been so close since eighth grade, through high school. We always broke down on brothers, our broke down on family," Dardis said.

"The one thing I'd say through my experience on the baseball team was it was always easy becoming friends with all of the guys. Everyone had this one focus when they were together, and that was getting better. Everyone is just so nice. It's a Chaska thing I think. All around you at school, in any sport, everyone was so supportive," Born said.

That was apparent when Born joined the football team last fall as a senior. He was part of the state championship team.

"It was a lot crazier than I first expected. Practices weren't as fun as baseball," Born joked.

Born and Dardis reached the varsity level as underclassmen. Born was in the line-up most games as a freshman.

"When I was a freshman, I had a lot of great role models. I was really uptight back then. I wouldn't have fun if I wasn't playing well. I remember the upperclassmen always tell me to loosen up," Born said. "Charlie's the rah-rah speech guy in the dugout, after the games. My thing to the guys is focus on others, think about others when you're down. If you haven't gotten a hit in a few games, instead of being down, be supportive of your teammates. Stay positive."

Dardis emerged on varsity as a sophomore, throwing a complete game with eight strikeouts in a win over No. 1 Lakeville North in 2018.

"Something our coaches, especially Scott Gerber, preaches, is that leadership within the dugout. As a pitcher, not playing in every game, or if you're not in the starting line-up, you still have a role to play. You have to keep up the energy, keep your teammates up. Supporting the guys in the field. You can still have a pivotal role in how your team performs," Dardis said of his leadership.

Wurtz (football) and Ridler (swimming) are headed to the University of St. Thomas, while Waisanen is hoping to play baseball at North Iowa Area Community College and Fontaine will continue baseball at Luther College.

On New Years Day, Born committed to the University of Wisconsin-La Crosse to play baseball. Nearly four months later, Dardis joined him. They will be roommates in the fall.

"It's something I've been thinking about pretty much as long as I remember. When I was a little kid I would ask my dad, am I on track to go to Major League Baseball? He'd say, 'yeah, son,'" Born said.

"I really liked the coach who reached out to me. Coach (Scott) Gillitzer. He's the guy who will be around me the most. He recruited me a lot. When I went down to visit the campus, he took me on a tour, took me around campus, and I thought it was awesome," Born said.

At La Crosse, Born hopes he gets to continue to pitch, something he enjoyed doing his junior year.

"All three of them were tremendous schools, tremendous coaches. It was a lot harder than I thought," Dardis said. "I sat down with my parents, my sister (Lucy), my brother (Drew). I had time to reflect alone as well. Just deep down inside, La Crosse was the right decision."

Like Born, playing baseball after high school was something he was hoping for in recent years.

"Every little kid, every little boy, you want to play in Major League Baseball. But I didn't really think about playing in college until really my sophomore year. Making varsity, having the year I had. I remember thinking what were the next steps to making that happen," Dardis said. "My love for baseball really sparked in about sixth grade. Travel baseball when we were on the community four fields by Clover Ridge. I've just fallen in love with baseball since."

Born always had the fastball growing up, Dardis countered with precision.

"I've never been the kid that threw the hardest. That was always Mac. For me, it was about finding an approach with batters, how to approach the game. I've always focused in on control. Experimenting with different pitches, curve balls, change-ups. You're trying to get outs any way you can. I'm always trying to get a leg up on the batter, the game," Dardis said.

Now Chaska High School graduates, Dardis and Born both reflect on the last four years with a ton of pride, and what is to come is even better for the Hawks baseball players.

"This group is special and the world is about to see it," Chaska baseball coach Craig Baumann said.