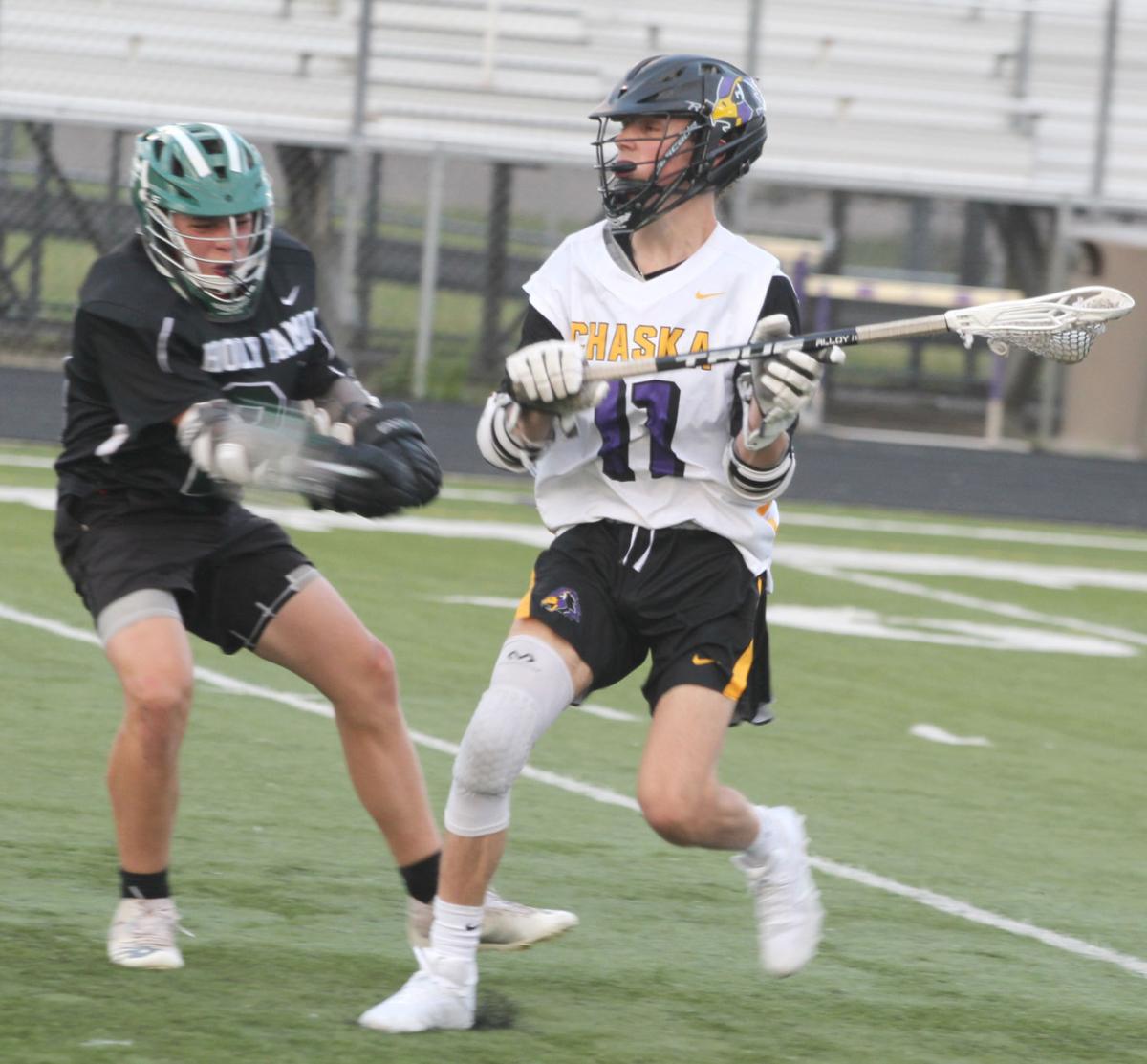 Senior Hunter Anderson had a hand in Chaska's offensive success on Monday in the home finale, winning 15-of-16 face-offs in a 16-2 win over Holy Family Catholic. 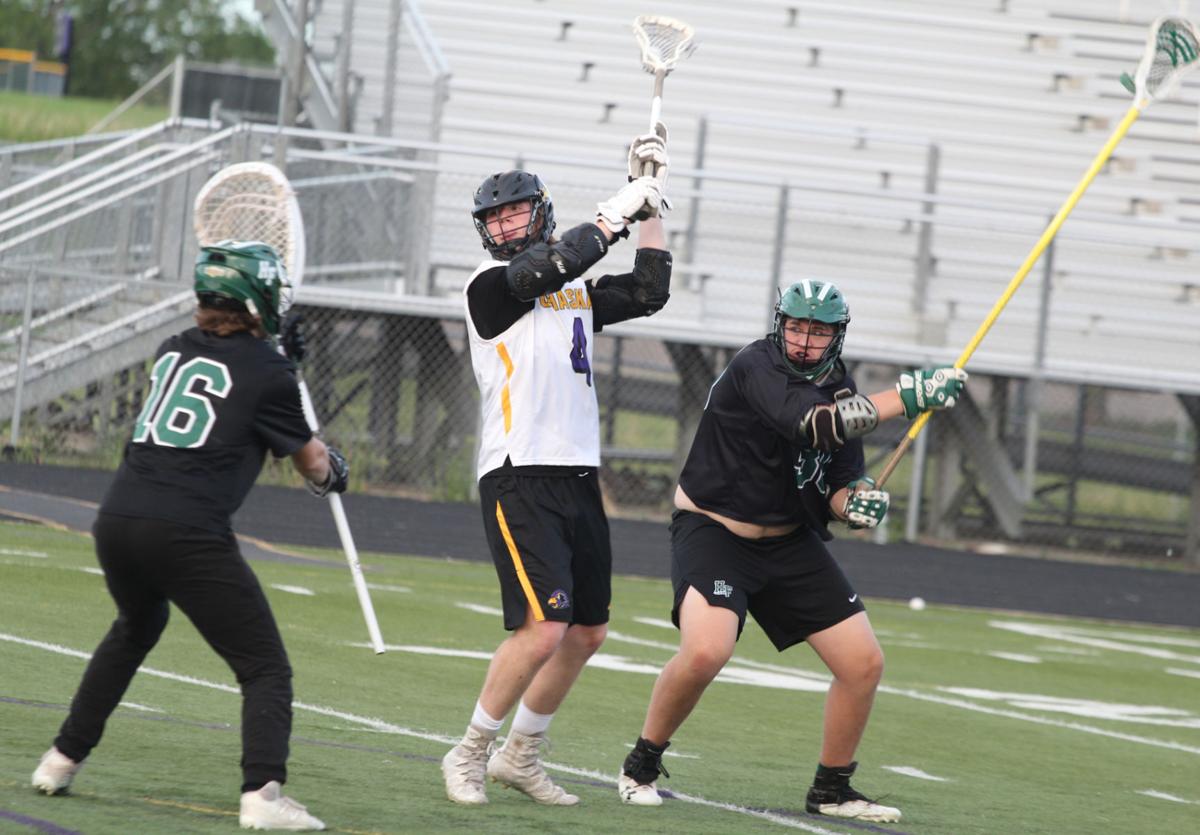 Chaska senior Alex Miller swings over the top for an opening goal in the second half, one of a career-high three scores for No. 4.

Senior Hunter Anderson had a hand in Chaska's offensive success on Monday in the home finale, winning 15-of-16 face-offs in a 16-2 win over Holy Family Catholic.

Chaska senior Alex Miller swings over the top for an opening goal in the second half, one of a career-high three scores for No. 4.

Four seniors had their moment at Chaska High School Stadium Monday. Each leaving a lasting impression on their lacrosse teammates with words to live by and advice for the future.

They also had their moment on the scoreboard, a 12-0 advantage at halftime, a 16-2 win over Holy Family Catholic to even their record at 6-6.

Senior Hunter Anderson, who has plans to play lacrosse at North Central University in Minneapolis next year, won 15-of-16 face-offs for the Hawks.

Chaska is at Delano/Rockford on Saturday, May 29.

Chaska (9-3) completes the regular season at Delano/Rockford on Friday, May 28.

Southwest Christian boys tennis has won more matches this season than any other before it. Their section seed, No. 2, the highest ever for the Stars.

The Stars had a new-look line-up with Connor Galloway teaming up with Luke Schwen at first doubles for a 6-4, 6-3 decision, with Bergen Rosdahl and Caleb Denney scoring a 6-1, 6-4 win at second doubles.

Southwest Christian hosts St. Peter in the semifinals on Wednesday, May 26.

Eden Prairie won the team title in a tie-breaker over Minnetonka, both teams shooting 301 at Ridges at Sand Creek in Jordan on May 24 in the championship match of the Lake Conference season.

Skipper seniors Ian Meyer and Carson Herron were first and second with under-par scores of 70 and 71.

Minnetonka had four underclassmen in the field with sophomores Caden Meyer and Nevin Switz each shooting 80. Logan Beniek added an 85.

The Section 2AAA Meet is June 2 and 7 at Ridges at Sand Creek.

Eden Prairie posted its best 18-hole score of the season, 328, to beat Edina (335) in the Lake Conference Championships May 24 at Ridges at Sand Creek.

Medalist Emma Davies shot 76 with Rose Baynes adding a 79 for the Eagles.

Minnetonka, fourth in the team field with a 348, 10 strokes behind St. Michael-Albertville for third place, got a runner-up round of 78 from senior Ally Chan. Seventh grader Selena Wu also was in the top 10 with an 85.

Nikalette Wentland and Ruby Reding added scores of 92 and 93 for the Skippers.

The Section 2AAA Meet is June 2 and 7 at Ridges at Sand Creek.

* Seth Luther drove in three runs on two hits, including a double, as the Stars improved to 16-3 to complete the regular season. Koby McBroome was 2-for-2 with two runs scored, two stolen bases and RBI. Bennett Manley won his fifth game of the season, throwing five innings, scattering five hits with three strikeouts.

* The Stars enter the playoffs next week with a 10-3 record, having outscored teams 174 to 95 this season. "The players showed a great deal of improvement as the season went on. A lot of new players ended the season looking like experienced veteran players. There are only two seniors, so the future is promising," Southwest Christian coach Mark Anderson said.

The second-seeded Skippers advanced through the first round of the Section 2AA North tournament with a sweep of Chaska. No match results were available.

* The Sabers avenged an earlier season 5-2 loss, turning the tables on Chanhassen in a 4-5 match-up. The deciding point came at first doubles with Sabers' Owen Forsthe and Otarhe Okoh winning 6-0, 2-6, 6-3, over the Storm team of Josh Katof and Mick Fitzgibbons.

* Minnetonka hit double-digits in wins with a 10-0 blanking of Robbinsdale Armstrong in five innings. Zariya Anderson hit two home runs for the Skippers.

* Melanie Stewart-Hester drove in three runs on a double and two singles, but Holy Family Catholic saw a 4-2 lead slip away with a six-run sixth inning for Glencoe-Silver Lake. Sophia Mackey (3-for-3, double, two runs), Sydney Hickey (2-for-4) and Lauren Weigel (2-for-4) were other offensive leaders.