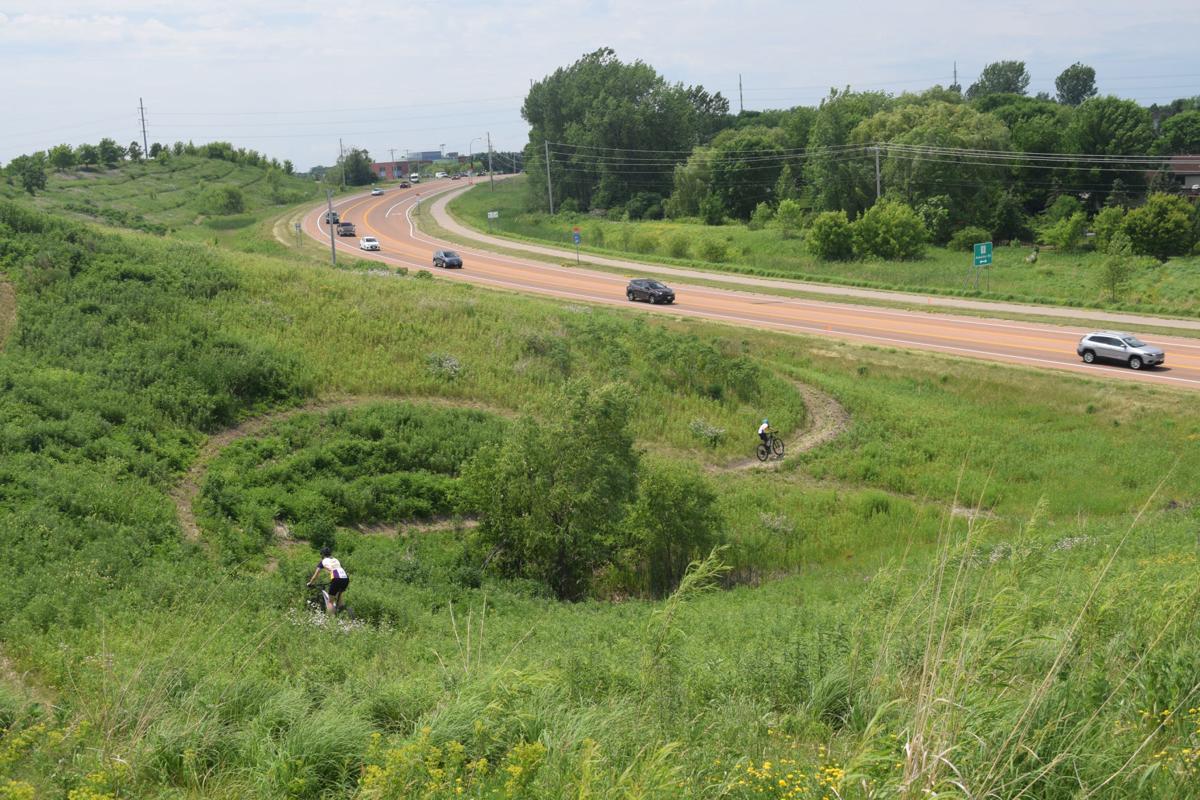 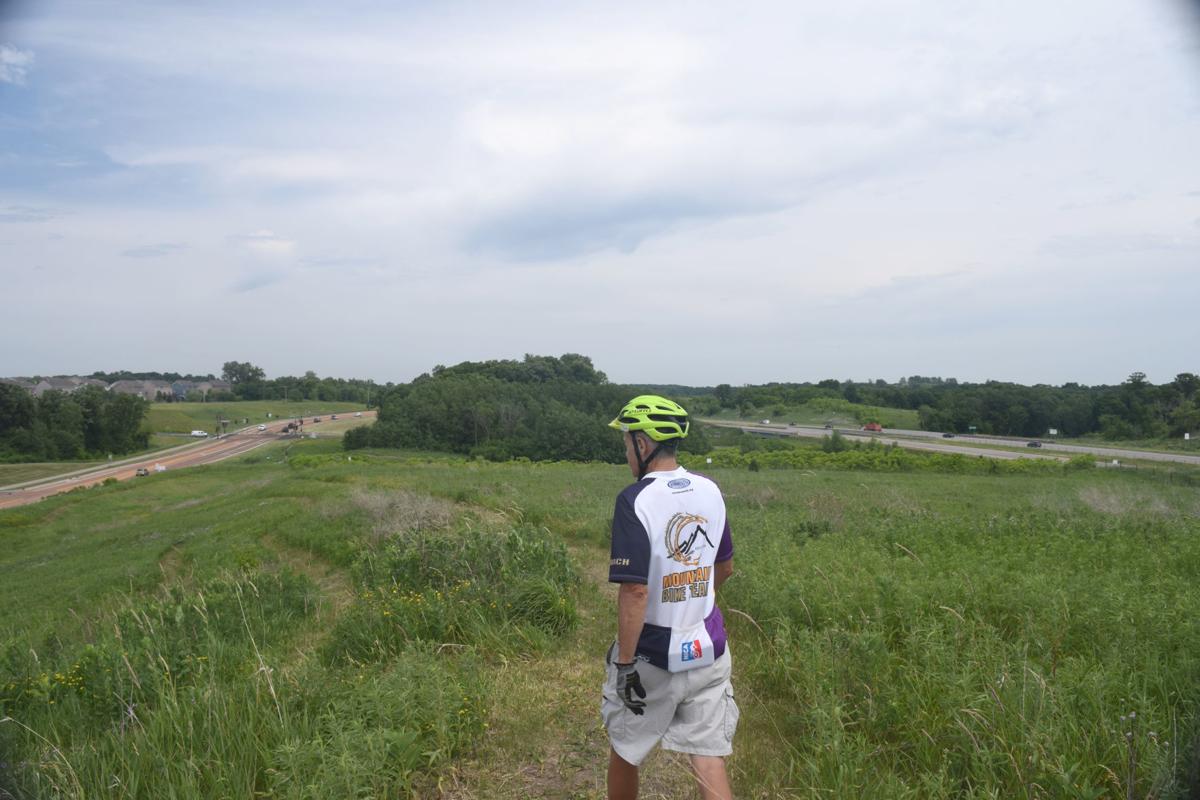 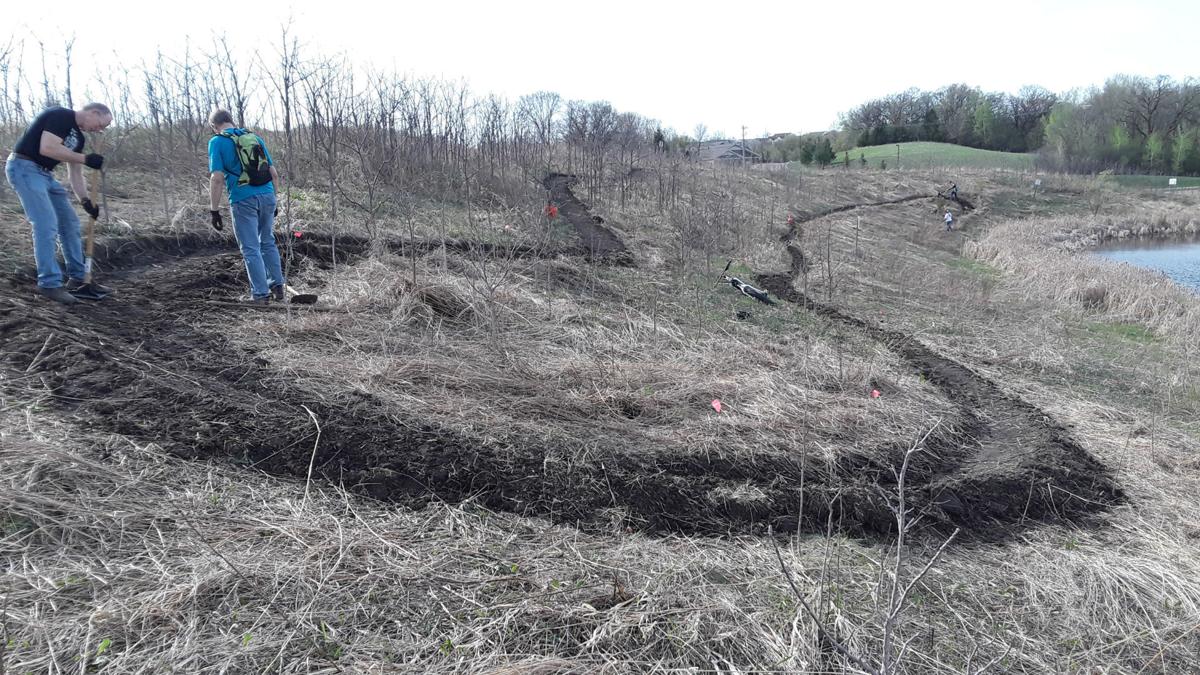 At first glance, the southeast corner of Audubon Road and Pioneer Trail in Chaska appears to be all rolling hills and meadows, filled with wildflowers and prairie grass.

However, look closer, and the knolls along Highway 212 are lined with brown streaks, looping around like a roller coaster. Soon those trails will be filling up with athletes in a growing sport, looking for a shot of adrenaline.

Mountain biking is ready to take over.

Two-and-a-half years ago, Chaska Parks and Recreation Director Marshall Grange and Vossberg met with the Minnesota Department of Transportation to discuss getting a permit to build biking trails on the land.

Construction of the “Hawks Ridge” trails began in 2017 and the grand opening was June 25.

The trails, four miles in length, occupy about 45 acres of land, mainly in Chaska, with a small portion in Chanhassen. The trailhead lies at the southeast corner of Audubon Road and Pioneer Trail. Within the trails, there are different tracks based on a rider’s level of skill. Like skiing tracks, there is a green, blue and black trail, denoting easier to more difficult runs.

During the entire construction, Carver Trails has been in charge of building the trails, which cost less than $3,000, as opposed to hiring an outside company to build, which could have been $25,000.

Along with these trails in Chaska, another trail will soon be available for mountain bikers in the southwest metro.

A new mountain biking trail is being developed in the Carver Park Reserve in Victoria.

Three Rivers Park District, in association with the One Track Mind Foundation, is overseeing construction of about 10 miles of trails in the park reserve.

One Track Mind Foundation is an organization that helps fund and maintain mountain biking trails around the country, working closely with local conservation groups and kids.

They have projects funded in Idaho, Colorado, California and Minnesota.

Tracy Paradise, CEO and president of One Track Mind Foundation, grew up in New Hampshire and moved to Minneapolis 11 years ago. She is passionate about the outdoors and mountain biking, and has seen the need for more mountain biking trails, especially with the help of kids.

“(The kids) clean up the trails … they learn leadership skills and see a project through from start to finish,” Paradise said. “I think that mountain biking has really gotten huge for the kids.”

Construction is being done professionally by Progressive Trail Design and is expected to be completed by the fall.

Over the past three months, the COVID-19 pandemic has forced people into many new hobbies. One of those is mountain biking.

With more people interested in going outside to burn energy, the new trails are likely to have no shortage of visitors.

Out in Victoria, the new 10-mile trail is expected to bring in lots of people, both experienced and novice riders.

“We’re providing an outlet for people to get some fresh air,” Skinner said. “If you’re new to mountain biking, you can expect something for everybody.”

“Because of COVID-19, more people are riding bikes,” Vossberg said. “There is definitely going to be a lot of interest.”

Among the groups interested in the new trails is the nearby Pioneer Ridge Middle School. According to Grange, the middle school has a fleet of about 40 bikes that will start to be incorporated into the physical education curriculum.

Vossberg, one of two head coaches for the mountain biking team that includes Chaska, Chanhassen and Eden Prairie high schools, said that these trails are not designed to be a walk in the park.

“These trails are going to be a bit challenging,” he said.

One reason is the elevation change in the trails. Vossberg said that most bikers do not like a lot of vertical climbs during their rides, but given that these trails vary by roughly 300 feet in elevation, it is a great way to build endurance for the races.

He cautions riders, however, that they should not ride on the trails when wet. Deep ruts can be created by riding on a wet trail, which will make it harder to dry. Check Carver Trails’s Facebook page before visiting the trail for more information.

At Chaska High School, the mountain biking team is flourishing.

Trinity Atterson is a member of the school’s mountain biking team.

Born and raised in Chaska, Atterson, 16, has been riding competitively for four years and has found a community of friends from her sport.

She initially found an interest in the sport one day when she was in sixth grade, when she and her mother, Judy, walked into the Michael’s Cycles shop in Chaska and saw a group of kids attending a biking mechanics class.

Interested in the class, Judy, a former mountain bike rider herself, wondered how to get Trinity involved with the group of cyclists.

The next spring, Trinity, then in seventh grade, and Judy went to a mountain biking information meeting, got hooked, and soon Trinity began riding on the team.

From the first moment on the team, Trinity felt included. High school riders mentored her throughout the season and helped her grow as a rider.

“(Mountain biking) is fairly easy to pick up, but hard to master,” Trinity said.

Now as an incoming high school junior, Trinity enjoys her role in helping mentor and include all riders, a staple of the sport.

“On the trail, we’re not just cheering for our team. We’re excited when anyone comes down the trail,” she said. “We want to learn and grow from each other.”

The Atterson family is an example of an entire biking team. All four siblings, Trinity, Grace, 14, Grant, 12, and Ethan, 10, compete competitively in the sport, along with Judy’s husband, Rob.

During the process of constructing the trails, 50 volunteers, including the Atterson family, helped till and rake the hilly meadows to make the single track mountain biking trail.

Mountain biking is not just growing in schools but in communities as a whole. Unlike other sports with many pieces of equipment necessary to participate, mountain biking allows novices to get experience without much hassle.

“As a beginner, all you really need is a bike, helmet, shoes, eye protection and a willingness to be outside and active,” Trinity said.

With the new trails at Pioneer and Audubon, Trinity and Judy will enjoy the short two-minute bike ride from their house to their outdoor sanctuary.

“We are looking forward to having a new trail in our backyard,” Judy said.

Many families like the Attersons will now have that luxury. Two new mountain biking trails will sit freshly made in the southwest metro, accessible for all ages and skill levels. And they are ready for action.

“It is an exciting opportunity for this area of the metro to grow in (mountain biking),” Judy said.