Chaska/Chanhassen senior Brayden Slavik set a pool record at the Eden Prairie Community Center in the 500-yard freestyle, winning a section title. Slavik will compete in four events at state this weekend. 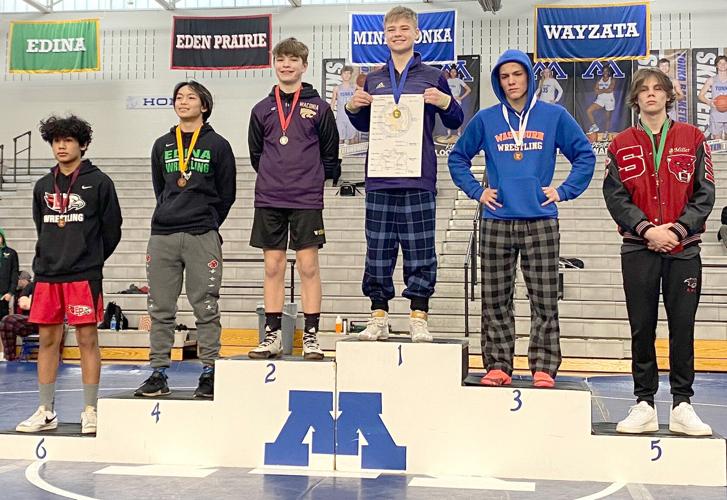 Chaska/Chanhassen senior Brayden Slavik set a pool record at the Eden Prairie Community Center in the 500-yard freestyle, winning a section title. Slavik will compete in four events at state this weekend.

Brayden Slavik steadily was dropping time in distance freestyle events over his sophomore and junior seasons. Enough so to qualify for the state meet in 2021 where he was 14th overall in the 500-yard freestyle.

Swimming behind the likes of Luke Ridler, Reese Hodgins and Callen Zemek in recent years, all collegiate swimmers now, Slavik, originally a breaststroker, is now front-and-center in the line-up as a senior for Chaska/Chanhassen. And he was at the front in the 500 freestyle finals at the Section 2AA Meet in Eden Prairie on Feb. 25.

Slavik set a pool record at the Eden Prairie Community Center, a time of 4:40.21, part of 10 qualifying swims for the Storm Hawks to state. He was also third in the 200-yard freestyle, under the state qualifying standard with a time of 1:44.48, a personal-best time.

“It’s definitely the highlight of my swimming career,” said Slavik of the pool record. “I was super excited. Smiles were forced out. There wasn’t anyway to hold them in.”

Slavik, an open enroll student from Green Isle, who grew up attending Cologne Academy, has been swimming club for many years at WEST Express in Chaska. He joined the sport looking for activity, jumping in the pool at a younger age with his sister, Madison, who swims at the College at St. Benedict in St. Joseph, Minnesota.

After training with a number of state champion swimmers over the years in the Chaska/Chanhassen program, that pedigree showed in a section meet featuring the likes of Minnetonka, Eden Prairie, and Prior Lake swimmers.

Needing a fast anchor, coming off the grueling 500, Slavik’s split of 22.25 seconds shaved enough time from the preliminaries to advance the Storm Hawks’ senior quartet of AJ Dehnke, Andrew Pana and Miguel Francois to state with a time of 1:29.17. Francois had the fastest split, 21.96 seconds.

“That was probably the most intense 50 yards ever. The three seniors ahead of me expected me to get it done,” Slavik said.

Slavik and Francois were joined by sophomore Casey Bretz and junior Lucas Becker in a state-qualifying third-place finish in the 400-yard freestyle relay. Becker’s anchor split of 46.75 moved the Storm Hawks past Prior Lake into the top-three.

Both Slavik and Becker will compete in four events at the state meet on March 4-5.

“It definitely was nerve wracking,” said Slavik of the section finals, “but when I got in the water, the whole environment we were in, I stopped thinking and just swam. I think as a senior, there’s even more pressure. I try to think about the younger guys. I was in their shoes once. Two years ago, I wouldn’t have seen myself up with the top guys in state.”

Slavik said the move to distance events was a change he balked at first, but the times don’t lie and WEST Express coach Heidi Miler saw a trend that sent him down the path. Chaska/Chanhassen coach Joe Mau and staff have honed his skills, helping get the most out of him.

“I’m still trying to break one of our teams records set by Luke Ridler, so there’s more to do,” Slavik said.

Becker continued to excel this season, qualifying for state in both the 50-yard freestyle and 100-yard backstroke where he was 10th last season as a sophomore. His time of 51.83 was second-fastest to Eden Prairie’s Luke Logue, who set a pool record in his home water.

Becker was one of four state qualifiers in the 50-yard sprint, a Section 2AA champion in 21.43 seconds. He enters state with the fourth-fastest time, just one tenth of a second behind top seed Rohan D’Souza Larson of Edina.

“He’s so crazy fun to watch,” Slavik said of Becker. “That bottom relay, he is such a strong swimmer and he showed. Getting a (split of 46 seconds) as a junior, so impressive. Even in practice, he trains really hard. He’s earned his success.”

The final three swimmers from the relay will also compete individually for the first time at state.

Currie, out of the consolation heat of the 100-yard butterfly race, posted a time of 52.75 seconds, one hundredth of a second under the state cut, for ninth place.

Bretz put together all four strokes to hit the wall in a personal-best time of 1:57.01 for fifth place in the 200 individual medley.

Dehnke had a time of 59.11 seconds, seven one-hundredths of a second to spare, for a state-qualifying third-place effort in the 100-yard breaststroke.

Chaska/Chanhassen will have divers at state for the first time in program history — dating back to the first co-op season in 2009-10. Junior Brian Gilbertson and freshman Adam Wilson were second and fourth overall. Teammate Micah Brecht, just an eighth grader, was fifth overall with a score of 256.60.

“When we got the news, we were in the shock. Both Brian and Adam to state. It really got us excited for the swimming finals,” Slavik said.

The State Diving preliminaries are on Thursday, March 3, with the top-16 scores through eight dives advancing to the finals on Saturday, March 5.

Swimming preliminaries are Friday, March 4, with the top-16 times moving forward to the Saturday finals at the Jean Freeman Aquatic Center at the University of Minnesota. Meet time on all three days is set for 6 p.m.

Michael Gillette got a taste of state as a seventh-grader, advancing to a preliminary round between Section 5AAA and 6AAA wrestlers, placing third behind two top-ranked opponents.

Back to the traditional post-season schedule in 2022, Chaska/Chanhassen’s Gillette will experience the real thing in 2022. A trip to the Xcel Energy Center in St. Paul.

The top seed in the 132-pound bracket, the eighth grader had no trouble winning the Section 6AAA title, scoring a 13-1 major decision and 50-second fall to advance to the finals where he beat Tiago Bertoldo-Zwicky of Minneapolis Washburn, 11-3.

Chaska/Chanhassen had eight wrestlers stand on the podium at the Section 6AA Tournament with Stephen Dragos (33-10), Josh Schmidt (12-18) and Russell Gillette (39-12) all placing third.

Dragos lost to Waconia’s Carter Katherman by a 9-0 score in the semifinals at 106 pounds.

Russell Gillette, team leader in wins this season, came up short, a 4-0 decision to Waconia’s Bradee Dwinell in the 145-pound semifinals. He beat Minnetonka’s Diego Pitt for the second time in two weeks, a 5-1 score, to place third.

Ben Pierce and Prentiss Derrick were both fourth overall, while Dylan Austad and Carson Turner finished in fifth place. Pierce, who had 16 wins this season, had a first-period pin and technical fall in the section tournament.

Derrick beat 30-match winner Gavin Falk of Edina by pin in the opening round at heavyweight.

Austad, the lone senior for Chaska/Chanhassen in the tournament, the only upperclassmen as well, won his final match in a 79-second pin.

BACK IN THE TITLE GAME

Carter Wishart backstopped Chaska to the Section 2AA championship game as a freshman in 2022, now the junior gets a second chance at leading the Hawks to their first state tournament after third-seeded Chaska beat Minnetonka 3-2 in overtime on Feb. 26 in Edina.

Sophomore Tanner Bruender’s game-winner at 2:07 of overtime capped a comeback from two goals down for the now 22-game winners of Chaska.

It was a Bruender shot in warm-ups that shattered the glass behind the net, forcing a 30-minute delay to the start of the contest. He didn’t miss the net in overtime, a wrister from just inside the blueline, a screen from the Skipper defender, beating Minnetonka goaltender Kaiser Nelson.

Chaska, beaten 3-2 by Eden Prairie in the 2020 Section 2AA championship, will face a Prior Lake squad also looking for its first trip to St. Paul. The Lakers knocked off top-seeded Eden Prairie 4-2 in the first semifinal.

Minnetonka, with goals at 9:38 and 9:36 of the first and second periods, a power-play tally from Hagen Burrows, and unassisted score from Ashton Schultz, was the team with momentum. That changed in the favor of Chaska by period’s end.

Zach Seltun’s third post-season goal, on the power play, pulled the Hawks within one with 3:30 to play in the second period. Sam Rinzel, who had an assist on the first goal, tied the game with under two seconds left in the middle frame on a blueline wrister.

The game-winner started in Chaska’s own end, Bruender moving the puck forward with a chip off the glass. Linemate Nathan Hinze dragged a skate on the blueline to stay onsides.

Chaska has won 14 straight games into the Wednesday, March 2 championship, which is back at Braemar Arena in Edina versus the traditional Mariucci Arena setting.

Prior Lake has won 13 of its last 16 games since a four-game slide in late December into January.

Boys Hockey: Southwest Christian/Richfield went 1-1 in the Section 2A playoff bracket, ousting Bloomington Kennedy 6-3 before being eliminated by Orono, 2-1. Andrew Erhart (two goals, two assists) and Caleb Bendell (two goals, assist) led the Stars in the opening-round win. Isaac Haugen made 35 saves in the game. Bendell scored versus the Spartans, a loss despite 31 saves from Jannes Kamp.

Boys Hockey: A power-play goal from Parker Osborn tied the Section 2AA quarterfinal at one between Holy Family Catholic and Prior Lake, but the Lakers scored the next two, both from Will Schumacher, the last into the empty net, in a 3-1 final. Kam Hendrickson made 34 saves on 36 shots for the Fire.

Boys Basketball: Senior Brady Nicholson hit 1,000 career points as Chaska upset first-place Orono for the second time this season, a 68-62 final, behind 25 points from Nicholson. He capped the victory with a slam dunk down the lane. Chaska will meet Waconia in the regular-season finale on Friday, March 4, with potential seeding implications on the line.

Girls Basketball: Chaska is the No. 1 seed in Section 2AAAA, receiving a bye on March 2 with the forfeiture of Prior Lake in the post-season. The Hawks are 23-3 into the playoffs, having finished the final week with three victories, including a win over Class AA No. 1 Minnehaha Academy as well as New Prague (67-45) and Orono (78-56). Chaska will host the winner of Shakopee and Chanhassen at noon on Saturday, March 5.