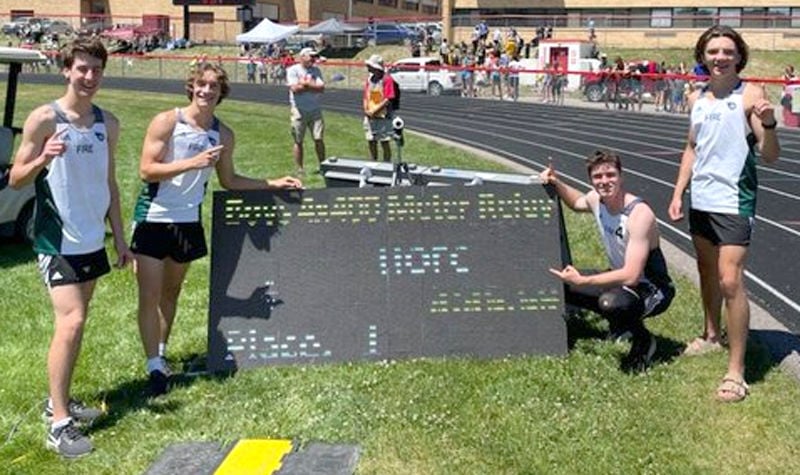 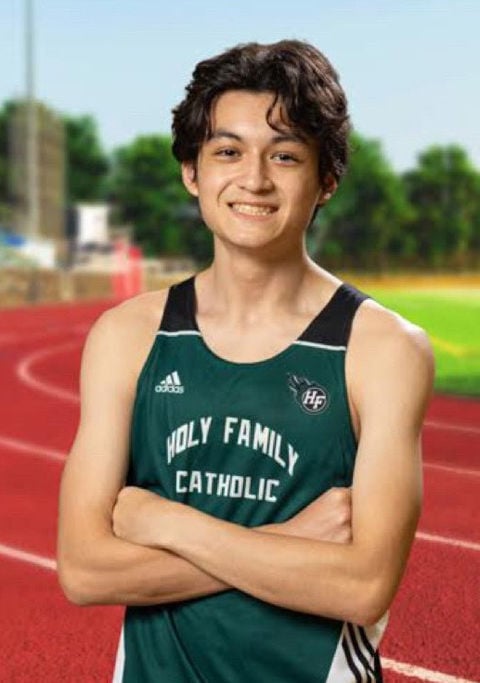 Jaden Lorenz of Holy Family Catholic became the first boys 3,200-meter state qualifier from the program since 2011 in a section championship win June 12.

Jaden Lorenz of Holy Family Catholic became the first boys 3,200-meter state qualifier from the program since 2011 in a section championship win June 12.

There are many things to be proud of within the Holy Family Catholic track and field program. But this fact tops the list.

Since 2003, the Fire have had at least one athlete compete in every state meet. Not many programs the size of the Fire can say that.

This year, Holy Family Catholic will be represented by five athletes in two events; all Section 2A champions on June 12 at Mankato West High School.

Senior Jaden Lorenz became the first boys 3,200-meter runner since 2011 to qualify for state, running well ahead of the field in a time of 10 minutes, 6.35 seconds.

Richelsen and Persful, joined by sophomores Bennett Russo and Jack Bauer, did qualify for state in the 4x400 relay -- the first time in program history in the event -- in a section championship time of 3:35.59.

"That is the nature of this sport," said Holy Family head coach Ian Parzyck. "You train hard all season long so that you can put forth your best effort of the season at just this one meet. At one moment, a personal-best effort in a near miss turns into a win and a state meet appearance. I am so proud of the resiliency of these young athletes to not only get to the state meet, but also to do something that no one in this program has ever done. This is a great moment for these Holy Family boys and for our program!”

In a contested race that saw lead exchanges on three of the four legs, Richelsen's anchor lap was the difference, moving the Fire into first place.

Holy Family Catholic boys was just 32 hundredths of a second off a top-two finish in the 4x100 relay, a time of 45.81. Senior Jakob Lenzmeier led the quartet of Jackson Riley, Eddie Diminnie and Riddik Collier to a season-best time.

Lenzmeier and Collier were joined by Joey Maher and Matt Chromy in a sixth-place 4x200 relay time of 1:38.89.

Lenzmeier was sixth in high jump (5 1/2 feet) with Diminnie taking fifth in long jump at 19 feet, 3 3/4 inches; a personal-best effort.

Senior multi-events standout Julia Red Wing capped her impressive season with three point-scoring performances. Red Wing was second in discus until the final round, eventually placing third with a throw of 117 feet, three inches. The automatic qualifying standard was 120-7.

Red Wing, who did not record a height in pole vault, missing three attempts at nine feet, eight inches, was seventh in triple jump at 32 feet, 11 3/4 inches.

She also ran a leg along with Berkley Neubauer, Sarah Chromy and Maddie Morgan in a fifth-place 4x100 relay of 53.43 seconds.

"All of our Holy Family Section athletes competed so well today," said Parzyck. "We had so many season-best and personal-best performances on Saturday that it was hard to keep count, which is a true sign that we trained well to peak at the right time. I am happy that we had some of our athletes break through to get to the state meet, and am very much looking forward to seeing them compete for honors at St. Michael-Albertville this week."